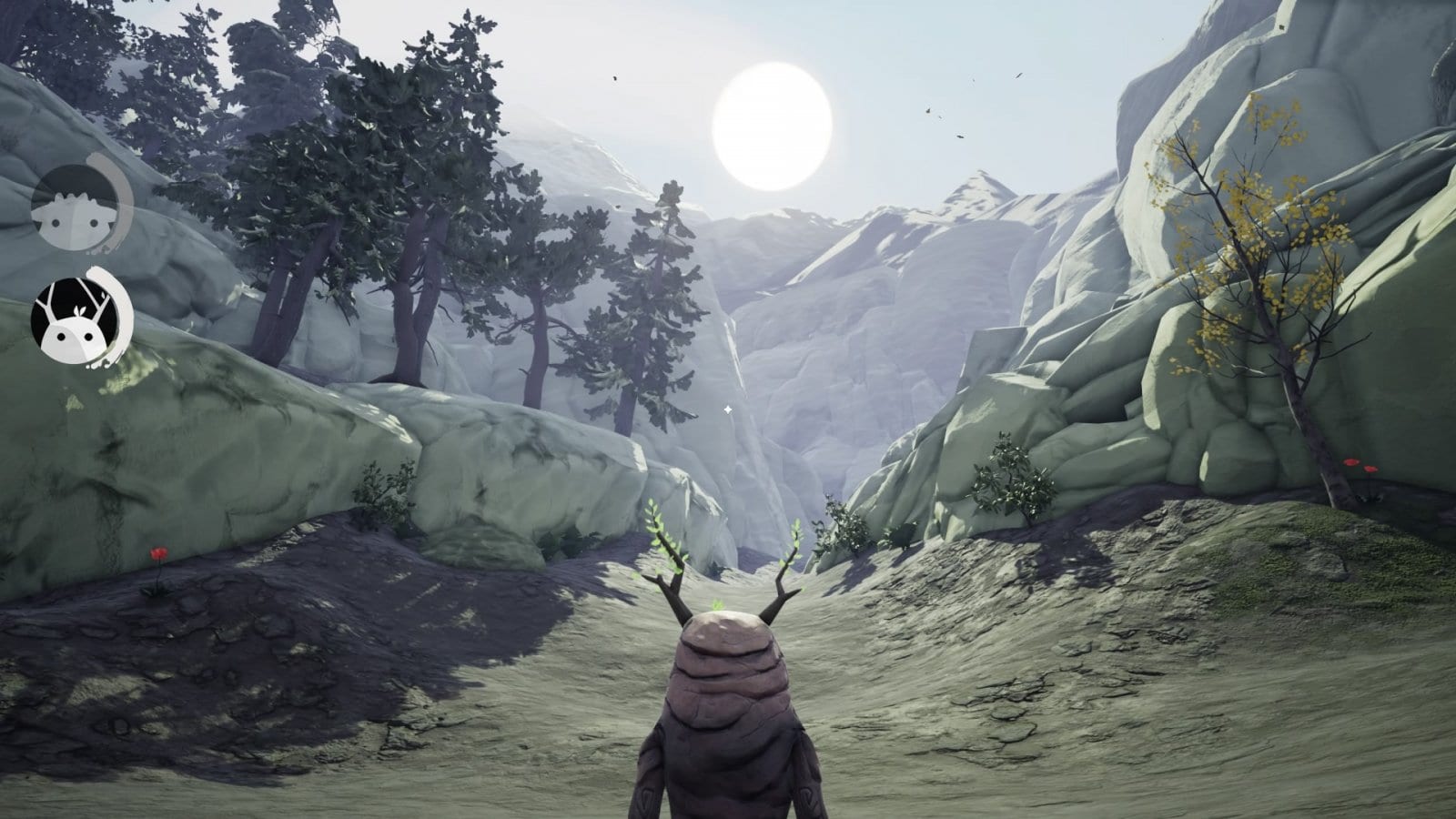 Remember when platformers dominated the industry, the same way FPS games and open-world titles have done? Skully, developed by Finish Line Games and published by Modus Games, has attempted to capture the essence of what made platformers so great for their time. Released on all major platforms, Skully boasts fun gameplay, a great soundtrack, and will charm its way into your hearts.

You play as Skully, who is a… ah… skull and has washed up on a remote shore with no memory of its past life. Reanimated by an enigmatic deity Skully’s modus operandi is to help this deity and stop a war that their siblings have created, and one which will ultimately destroy the mysterious island they call home. This war was waged so the victor could gain control of the Life Heart; a heart that gives the user more power than they could imagine. Each actor in this war believes what they’re doing is right and just, for the benefit of all living beings on this island, and all the characters that you will meet on Skully’s journey will either assist you or stop you in preventing this war. 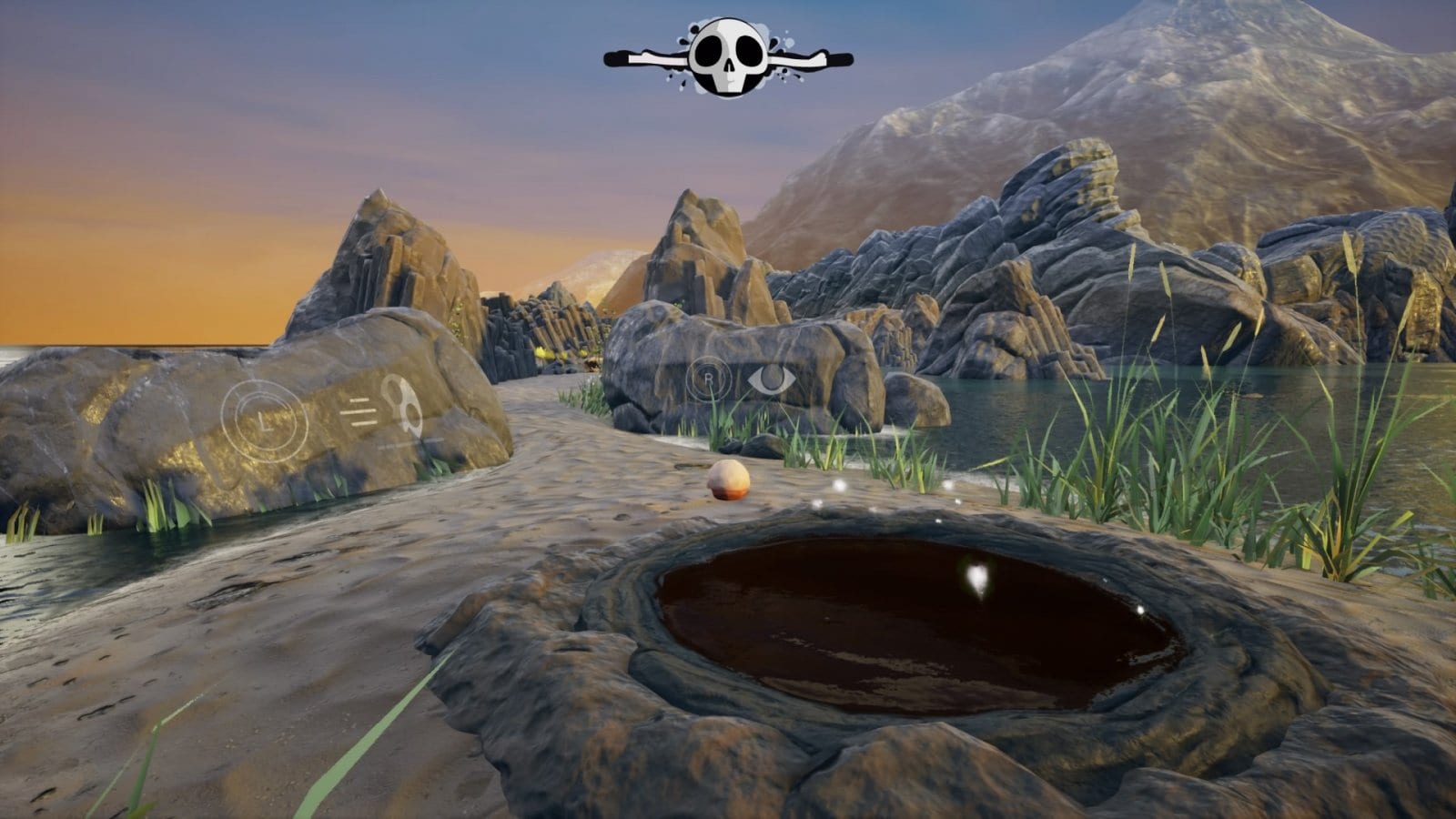 Roll, little one, and explore this vast island

The characters of Skully are great; they’re lively, emotive, and just generally fun. The enigmatic deity I mentioned earlier goes by the name Terry, and he’s about as fun and crazy as they can get. Although he might pop the same joke here and there, like one where he’s constantly joking about the fact that Skully can’t speak but somehow he interrupts him in every conversation, and it might get old, but overall Terry’s writing makes up where the jokes might not.

However, there are some things about this game’s writing that I can’t pass. Spoilers ahead on this one. Each character has some stake in this war. Terry, who’s the earth god, wants to protect all of life and land. Then you’ve got Wanda, who cares for water down to the last drop. Brent looks after the air, and Fiona looks after fire. Through the story, you’ll try to stop each deity from getting to the Life Heart, and when push comes to shove Terry picks up the mantle, locks his siblings in a magic container to prevent them from stopping him, and is now a player in this war. Skully now becomes the only living character (I’ll explain why I stated “living” in a little bit) in this game to seek an end to this war, and then Terry banishes him for his betrayal. 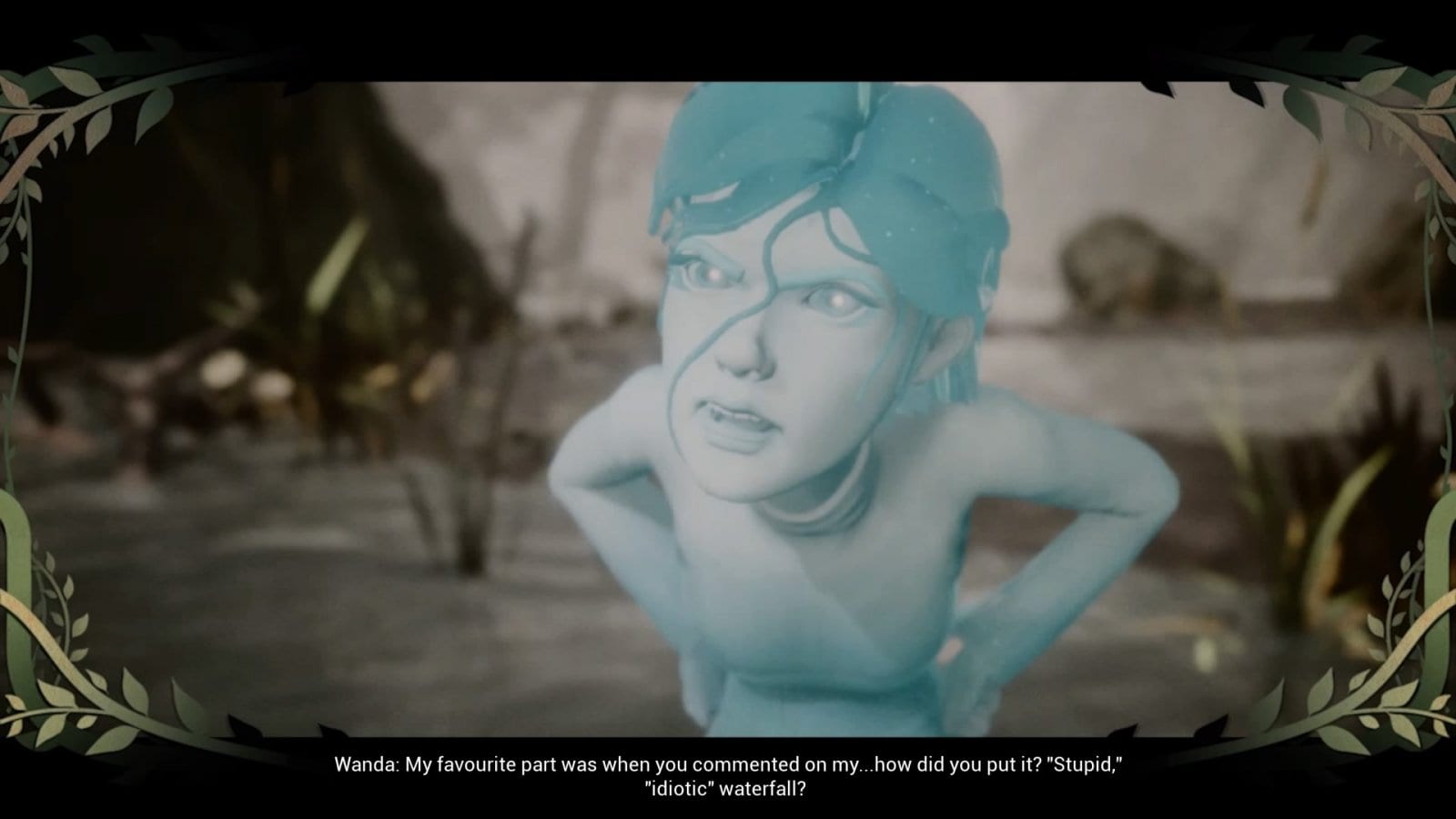 That’s fine, I don’t mind that part of the story; those story beats flow well and makes sense as you progress through the game. What I don’t get, however, is the very last moment of the final cutscene. Terry has finally breached the doors that lock away the Life Heart, and his powers are at their near maximum. The only way to reach a higher level of being is to take the power of the Life Heart for himself. Skully, who’s now guided by the spirit of the mother of those deities and who also wants an end to this war, catches up to Terry. A battle ensues, and the contents of the magic container spill out. Outcome the other deities, who all try to fight their way to the Life Heart. All full of anger and hatred, they strike, and in the kerfuffle, the Life Heart gets damaged. Skully, knowing full well that his purpose is to save the island and stop this war, seals the damage by using himself. This is the part that was written poorly; Terry goes from hating Skully to trying to stop Skully from sacrificing himself because he doesn’t want to lose his only friend. Like buddy, you kinda lost your only friend when you banished him in the first place. Terry also seems to forget what Skully’s purpose was, even though he reanimated the little guy in the first place because he needed its help. Terry also cracks a terribly timed line about how he wanted more time to spend with Skully so they could’ve collected more rocks together. Like dude, come on. If you’re so worried about collecting rocks with your “traitorous” friend I dunno what you’re doing in a war in the first place. This whole last scene just derails the situation from what it could’ve been, and just ends up as painfully cringe material.

In terms of the gameplay, the devs of Skully used a simple concept and did it well. They didn’t try anything ambitious; what they did, they did right. You can either roll around as Skully or switch between Forms at designated oil pools (as well as heal yourself) to get each task completed. The Strong Form can break walls and kill enemies, the Swift Form can run at Mach 1 and move platforms horizontally, and the Vault Form can double jump and move platforms vertically. And this is where it gets really fun, because while the game might direct you to use a certain Form at a certain moment, the environment, level design, and physics engine allow you to explore more creative options to complete the task in your way. For example, if there’s a huge gap but a few platforms around that you can shift in place, you might think you’ll need the Swift Form to move them and the Vault Form to keep them floating in mid-air. But, if you find the right rock, or move the platforms correctly enough, you can activate the Swift Form’s sprint ability. Then, hit that incline at the right speed, and you’ll soar through the air and well over that gap. There are so many options to tackle nearly all the puzzles that you’re only limited to how creative you can think. 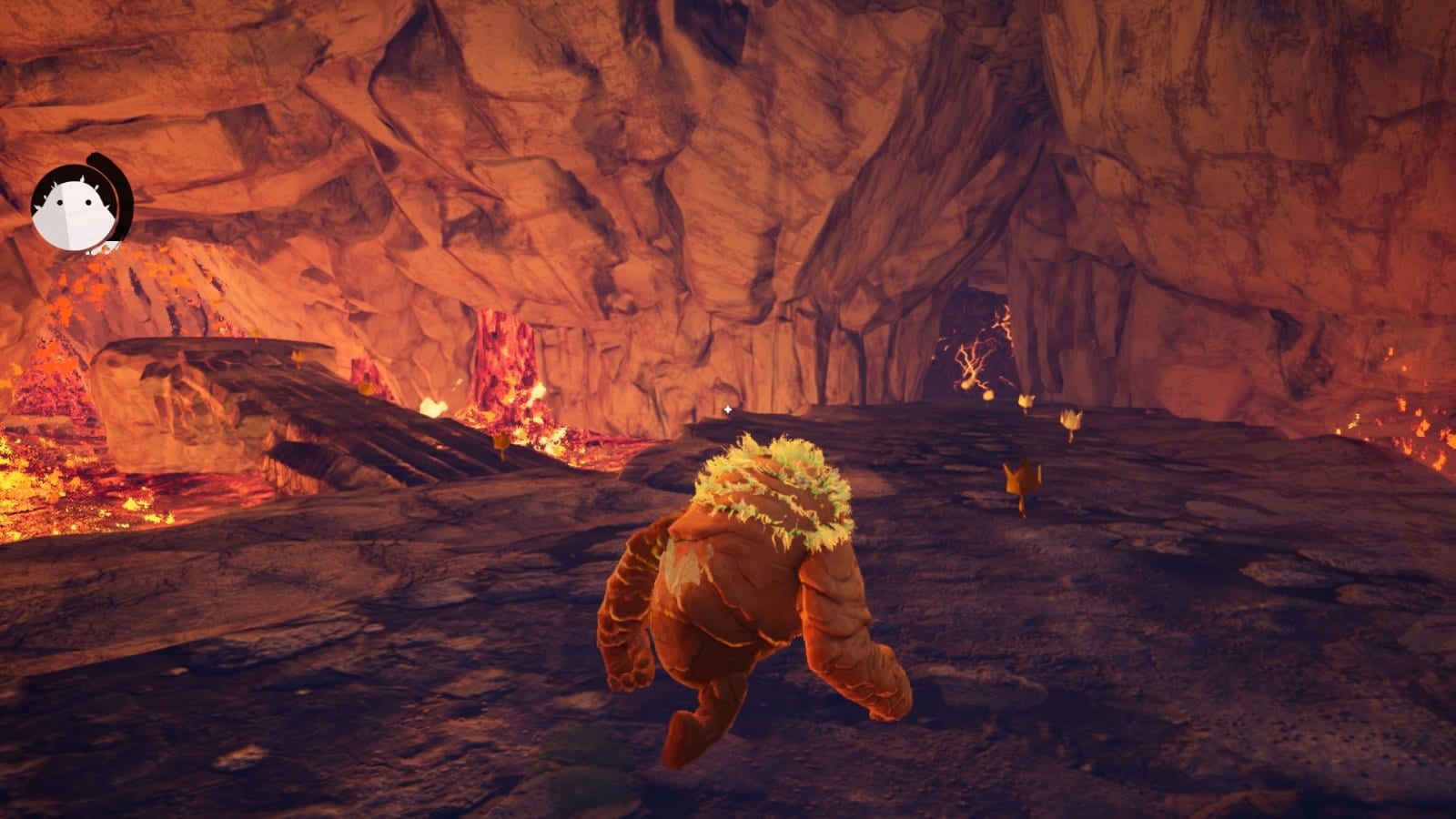 Follow the path, or attempt to make your own; you’ll be rewarded for your achievements either way

That’s also where the replayability comes in. Since you can tackle the puzzles with creative solutions, each time you come back to a level you might have new ideas you’d like to try out. If not, then the replayability comes in the form of the collectable flowers that are strewn through the level and that also direct you through different paths through the world. Although, in your first playthrough I’d highly advise you skip them because by the end of the game they don’t provide any meaningful difference to the gameplay and can’t be exchanged for anything whatsoever. Save it for returning playthroughs, when you want to 100% it and secure all the game’s achievements.

One of the best things in this game is the music. It’s joyful at times and tense in others and enhances the gameplay ten-fold. It’s one of those soundtracks that bring you to feeling nostalgic, even if you’ve only heard it a couple of times. My only gripe with the music is that it loops far too quickly, so much so that no matter how immersed you are in the game you’ll notice when the song starts up again. If the songs were much longer or had multiple altered versions of themselves that would be spliced in when certain gameplay moments occurred (like fighting enemies, getting to a difficult section in a level) then the game would have immensely benefited from it.

At the core of it, Skully is a simple platformer done right. It doesn’t try to be something that it’s not, it’s not ambitious in the slightest, but it provides a rewarding experience nonetheless. Coupled with a great soundtrack and fun characters, it’s definitely a game that’s flown under the radar and might end up as an underrated gem. Without a doubt it’s a game I’ll come back to and platinum soon enough, I just wish that story didn’t end so poorly.

Skully is a simple platformer that boasts fun characters, a great soundtrack, and creative gameplay; all of which provide a rewarding experience by the end of it. However, good things only last for a while, since the quality of the story drops off significantly by the end, and the poor music looping quickly becomes boring. And yet, it’s an underrated gem that you’ll likely want to platinum as soon as it’s done.

With a deep interest in writing, Ben followed that into a Journalism degree. As an avid lover for gaming, he is constantly expanding his library with console, PC, and VR games. He's obsessed with stealth games and loves hunting down the smallest of details inserted by devs.
Related Articles: Skully
Share
Tweet
Share
Submit