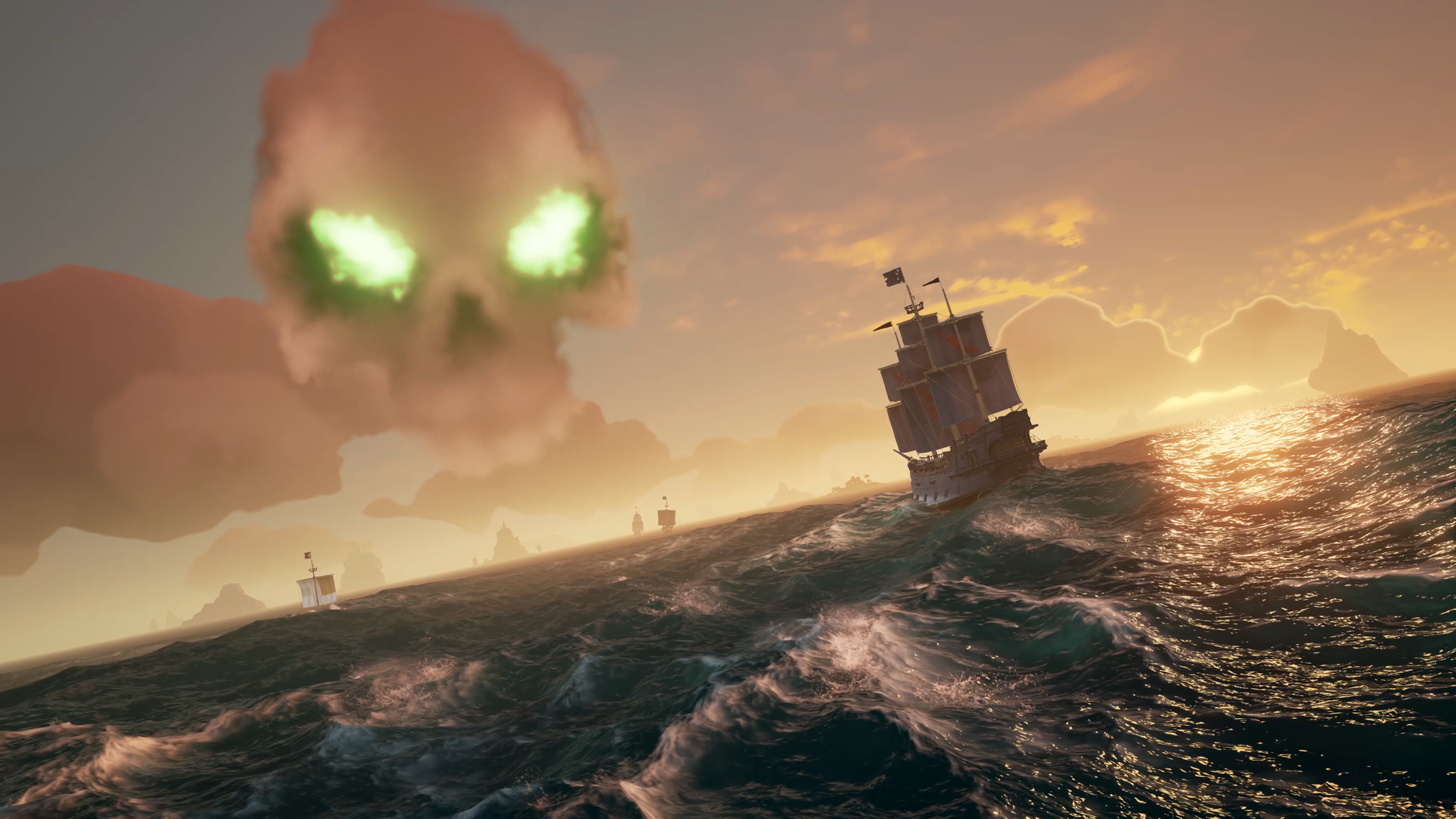 If you’re like me, then you’ve always longed to set sail on the high seas in search of adventure. And this is exactly the fantasy that developer Rare hopes to provide with their newest creation, Sea of Thieves. Rare has a history of making massively popular games such as Banjo-Kazooie, Perfect Dark, GoldenEye 007, and Viva Pinata, but in a lot of ways, Sea of Thieves is more ambitious than anything they’ve ever attempted before. The pirate adventure they aimed to create promised to provide the ultimate pirate adventure in an online environment where players would have the freedom to tell their own stories. And while Sea of Thieves is deeply flawed and has plenty of room to grow, they’ve certainly succeeded at this core objective.

Sea of Thieves is all about letting you live out your ultimate pirate fantasy in the manner of your choosing. Wanna search islands for lost treasure? Go for it. Wanna hunt down villainous skeleton marauders? Grab a cutlass and have at it. Prefer the quiet dignity of ferrying as a merchant ship? If that’s your thing, sure. And of course, you can simply choose to wait for other crews to do all the hard work, then ambush them and scavenge all of their loot for your own from what remains of their sunken vessel. Sea of Thieves doesn’t have a story, a main questline, a tutorial, or any real long-term objectives. Rather, it’s a game that asks you to get with a pirate crew and make your own story, and I had an absolute blast doing so.

Sea of Thieves surely isn’t for everyone. In fact, it might not even be for most people. It requires you to engage in sometimes frustrating levels of cooperation for long stretches of time, as you sail the high seas, complete voyages, and battle enemy crews, all of which can go extremely poorly if you aren’t continuously communicating and working together in perfect harmony. The game is also extremely unforgiving. You could spend two hours fighting for a pile of loot at a skeleton fort, only to make one mistake and crash your ship in the open sea, or get ambushed by an enemy crew as you haul it ashore and lose it all in the blink of an eye. But most of all, it requires you to rid yourself of the expectations typically associated with open-world multiplayer games. If you’re the type of person who needs to be told what to do in a game, or wants to feel like their character is getting stronger and earn better loot with extended play, or needs to feel like the game is fair and players are protected from the ill desires of others, then Sea of Thieves certainly is not for you.

But the specific experience that Sea of Thieves provides, if embraced and accepted with all of its frustration and strangeness, is one that rarely fails to bring a smile to one’s face and hours of enjoyment. With 30+ hours in the game, I’ve experienced triumphs that have compelled me to stand and shout, and heartbreaking disappointment and failure that made me want to consign myself to Davy Jones’ Locker. I’ve ruined other players’ day by sinking their ship and taking all of their hard-earned loot when they were moments away from cashing it in, and have had the same happen to me in a devastating twist of events. I’ve stood triumphantly upon a pile of skeleton corpses, gotten my entire team killed with one bad call, and come face-to-tentacle with the mighty Kraken and lived to tell the tale. Sea of Thieves is about creating your own story and seeing where the sea takes you, and with friends at your side it’s an adventure that’s hard to beat.

Though Sea of Thieves’ core gameplay loop succeeds in being entertaining for hours on end, the game still has a long way to go in terms of organized content. Right now there are essentially only three or four types of organized activities, and then a whole bunch of stuff to do that players can invent on their own (like attacking other players and taking their stuff, for example). The map itself is also fairly limited in scope. Though it is an enormous area with plenty of islands, only a few of the landmasses are memorable, and over time become a blur of palm trees, sand, and rocks. For players looking for more to do than hunt skeletons, ferry goods across the sea, and attack other crews, they will find themselves with few options. The good news here is that Rare has stated that Sea of Thieves is a game that will grow over time, with in-game events already planned for in the near future. I can’t speculate on whether this upcoming content will be significant or good, and for the purposes of this review I won’t take into consideration content that doesn’t yet exist, but for players who are currently investing their time and money into Sea of Thieves, this is an enticing promise that should excite fans.

I am lucky enough to have a lot of friends who are playing Sea of Thieves, and my best experiences in the game have been while playing with those friends. And when I’m not playing with friends, I’m the type of person who enjoys matchmaking with a full crew of other players and meeting new people and forming a bond with those people. And Sea of Thieves shines most in a multiplayer environment, where players are goofing off, or doing something unpredictable, or making a mistake, or pulling off something amazing that saves the day. The single-player experience, on the other hand, has very few of these unknown variables and can quickly become pretty dull. I didn’t spend a ton of time in this mode, as I don’t think that it plays to the game’s strengths and isn’t the mode I prefer as a gamer, but I wouldn’t recommend it. If you’re looking for a game to play alone, Sea of Thieves is not for you. You’ll likely find yourself only able to complete low-level events at a snail’s pace, and if you run into an enemy ship rolling four players deep, you’re probably going to lose it all in a devastatingly short firefight.

One of the major issues I foresee emerging in Sea of Thieves as players begin to acquire gold and customizing their characters is a lack of variety in player styles. For a game where customizing your character and ship with cosmetics is the only real progression, there simply aren’t enough options at the moment. The options that are available can make your pirate look quite badass, don’t get me wrong, but if I’m to truly feel like my pirate and vessel are unique, we need a surplus of options so that I never run into another player who looks like me. The endgame of Sea of Thieves, which apparently only triggers once a player has reached rank 50 in all three factions, is said to have some unique and badass customization options. I don’t know if there is enough here to give the game the variety that I think it needs, but the barrier is probably too high to fix the problem alone. That said, for a game that plans on growing over the years via regular free updates, Sea of Thieves should be praised for what it doesn’t have: microtransactions. It would have been very easy to offer an easy route to cosmetics via microtransactions, and would make sense for a game with such a long tail like Sea of Thieves, but there are none to be found. I don’t know if Rare will implement such a system in the future to help fund the game’s development, but for now I think it’s important to give them credit where credit is due and providing a very fair deal to early adopters.

One of Sea of Thieves’ biggest strengths is in its presentation. Visually, the game is absolutely gorgeous, from head to toe. I played it on the Xbox One X, which is a truly stellar experience in 4K with HDR. It features without a doubt the best water in any game, which is important as it’s where you’ll be spending most of your time. The rest of the world, though cartoony and simplistic, is bursting with the life and vibrancy that you’d expect from Rare. The sound of Sea of Thieves is equally impressive, with pulse-pounding pirate tunes during combat encounters, the sound of gentle ocean waves almost omnipresent throughout the game, and addictive songs that the players themselves can play as they journey throughout the world. This is not a title that you’ll ever want to play on mute.

Sea of Thieves is a disgustingly enjoyable game that is endlessly entertaining among friends. That said, it has an incredible deficit of organized content, too few customization options, and needs a bigger, more varied world map. I have no doubt that as the game grows and evolves, it will become an iconic, phenomenal title, but for now it remains deeply flawed even while being relentlessly fun.

You know that jerk online that relentlessly trash talks you after every kill? That guy was probably Travis "Tie Guy" Northup. Competitive, snarky, and constantly wearing a tie, Travis has been writing his opinions about electronic media since he was a teenager, and is pretty much the only person to hold his opinions in high regard.
Related Articles: Sea of Thieves
Share
Tweet
Share
Submit