Some people play games to explore fantastic worlds. Some want to challenge their brains. Others just want to relax. I tend to lean towards the first two, but it’s nice to chill out with peaceful games once in a while. Himno caters to the crowd that wants to take their time and experience what the game has to offer.

Himno is a 2D platformer with only one goal: explore the districts and find their exits. According to the description on Steam, there’s no end to the game. After playing for a little while, that seems to be the case; honestly, I think that’s for the best. Himno has no story to follow either, but again, that doesn’t hurt the game. With the way the game plays, a story would just feel forced. 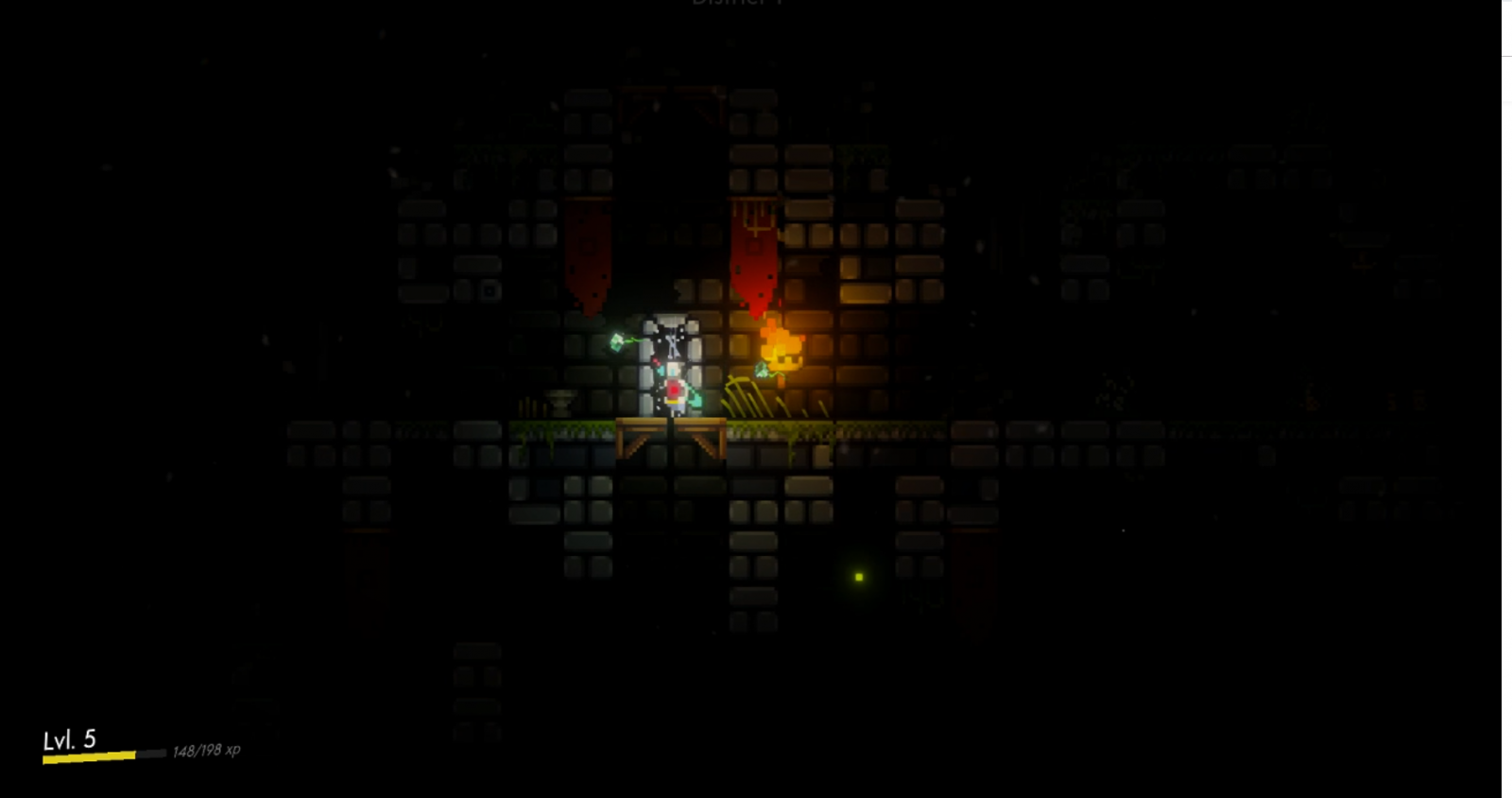 The gameplay revolves around walking and jumping around the various districts. The districts are always procedurally generated, so no two districts will ever be the same. It’s a perfect choice, especially considering that the game is about exploration. The levels consist of both floating and moving platforms, surfaces that invite wall-jumps, and a layer of water at the bottom of the screen. Falling into the water at the bottom is the only way to die; there are no enemies or traps to be wary of. That being said, falling into the water causes you to restart your run. That can be a bummer, but it’s nice knowing that that’s the only way you can die.

Along the way, you’ll find yellow beads scattered around the levels, green gems placed on pedestals, and wisps randomly laying around some levels. The yellow beads and green gems reward you with experience, which increases your level. The only benefit of leveling up is that it allows you to obtain wisps that you find in some districts. For example, you may find a wisp in a district with “level 7” labeled under it. If you’re level 7 and reach it, you can collect it and now the wisp will follow you. The downside is that it doesn’t seem like the wisps have any benefit to them beyond being a source of colorful light. They add more color and beauty to the world, which is nice for a relaxing game like this; especially since the world outside of your immediate area is blanketed in darkness. This can be annoying to some, but I feel that it fits well with the idea of the world opening up around you as you explore. In order to see more of the districts, you need to venture out and see things for yourself. 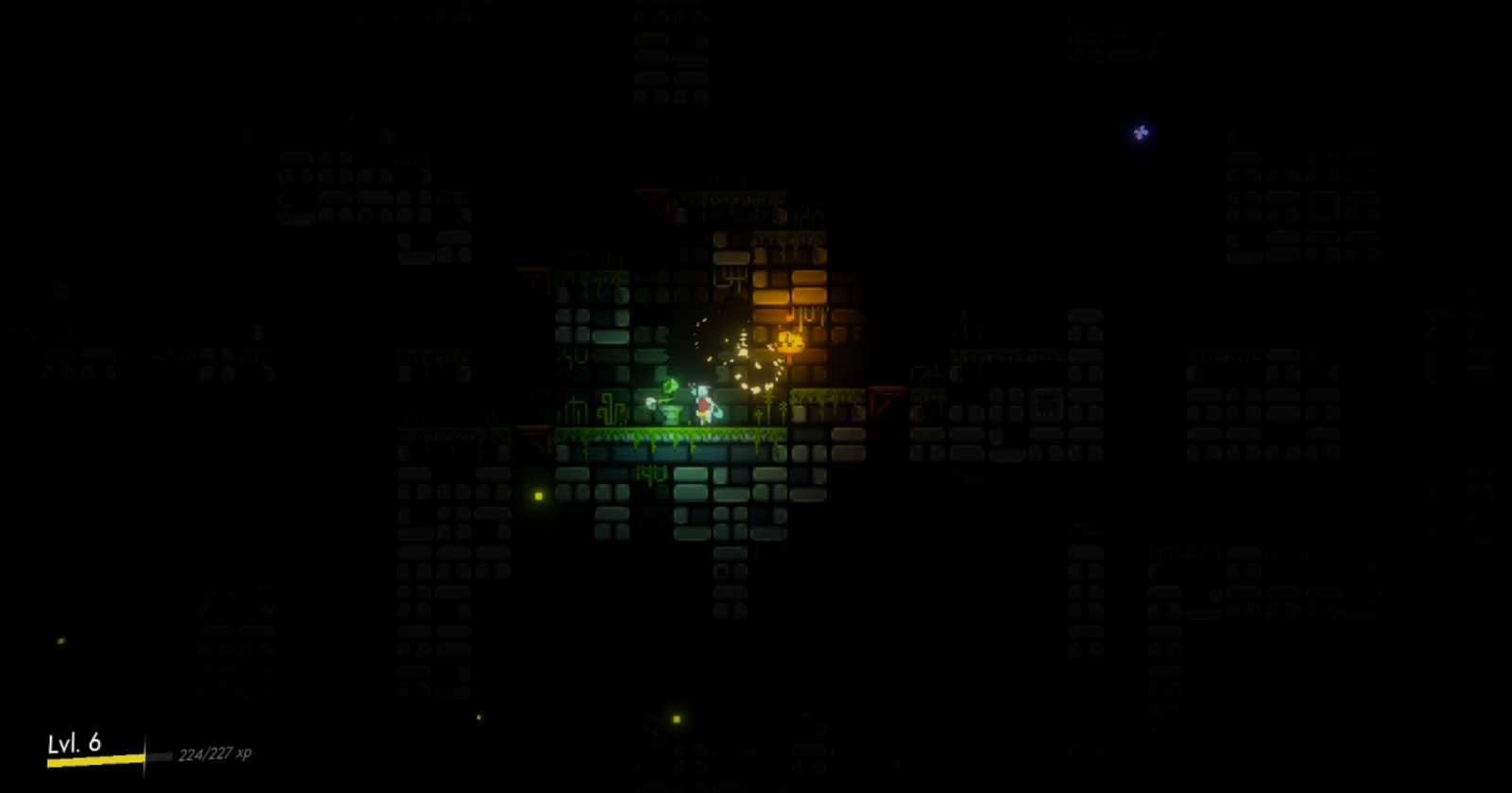 The levels themselves are dark and ruin-like, but have a sense of tranquility and beauty to them. They aren’t anything to marvel at, but something about them is charming. The ambiance and sound effects of the game are very relaxing, whether they are the thuds of wall-jumping or the dings of collecting gems. All of this accompanied by the simple gameplay make for a nice experience if you just want to relax and explore for a bit. You’ll probably only want to play the game in short bursts, but those short bursts are nice if you just want to waste some time. The added bonus is that the game is being released for free, so if you want to chill out with a peaceful platformer, then Hinmo is a safe bet. You’ll have to wait until April 12th for Himno to officially release, so be sure to keep an eye out.

Himno is a relaxing 2D platformer where death only comes from falling. The levels are dark and ruin-like, yet emit tranquility and beauty as well. It's best played in short bursts, but if you just want to turn off your brain and relax, here's your chance.

Codi loves to play video games and watch movies. He will watch almost any kind of movie just to experience them. His ideas take inspiration from the shows and movies he watches, and games he plays. He also loves a good pun.
Related Articles: Himno
Share
Tweet
Share
Submit