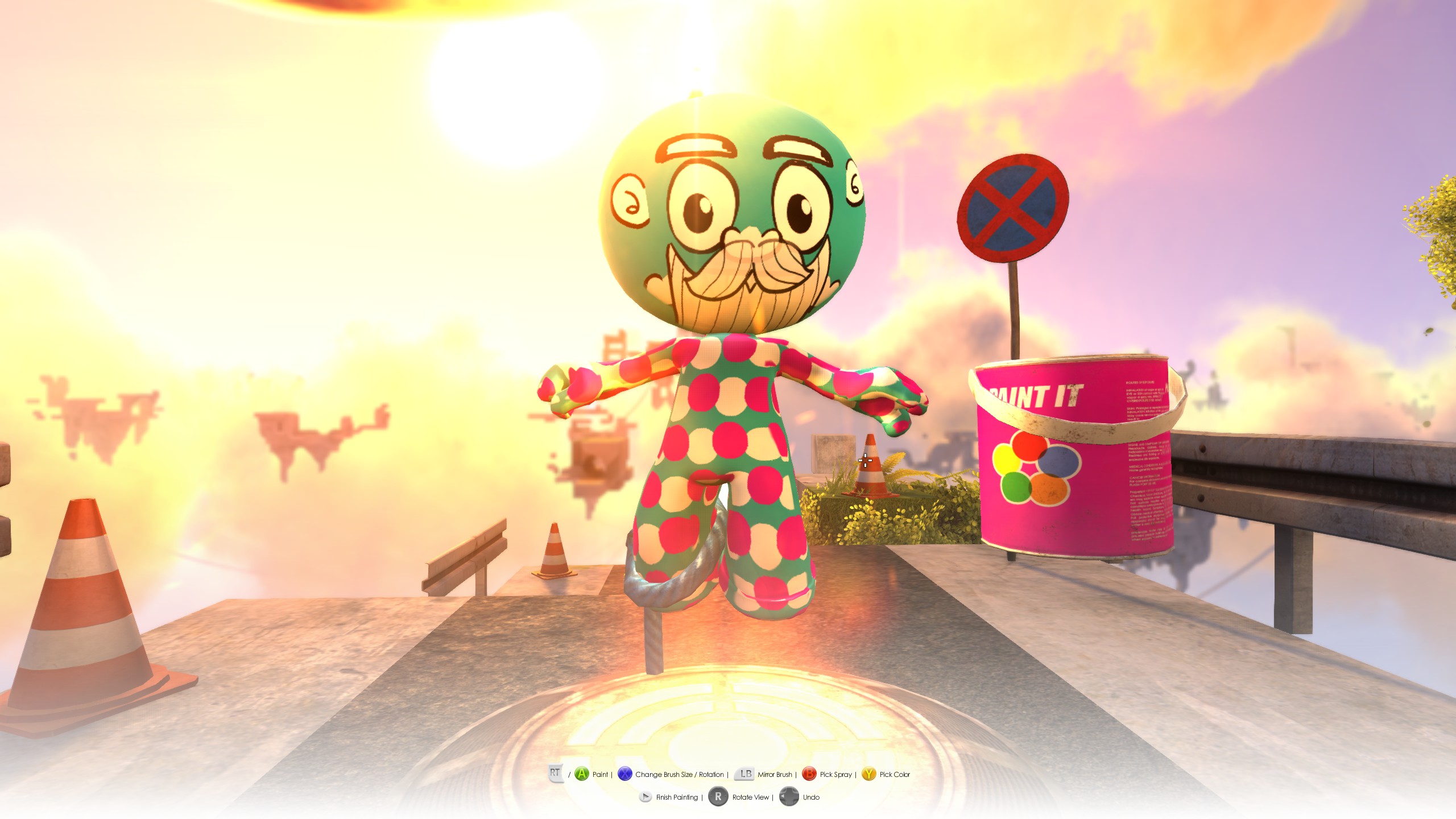 Youropa is a puzzle-platformer whose main character took some inspiration from Sackboy. The game stars a cute humanoid figure you decorate with paint. This paint loving guy or girl can walk on walls with his suction cup feet. At first, this is all you can do. You don’t even get the ability to jump until rather late in the game. Still, the puzzles are designed well around this skill and it is fun to see how the puzzles slowly evolved to consider your new skills like running and jumping. This is one paint adventure I recommend taking.

Youropa has a fun style to everything that revolves around paint and Paris. The game starts with the Eiffel Tower losing power and moving and a bunch of Paris is tossed high into the sky. It really isn’t clearly explained, but that’s fine. It sets up your goal and you have to get moving. I like the protagonist and your ability to decorate it with paint. I could have spent hours alone just trying different paint combinations to make it look as strange or cool as possible. It took inspiration from LittleBigPlanet’s Sackboy, but I believe it is just different enough to stand on its own.

Speaking of the puzzles, they are a lot of fun. They start off simple enough but slowly get increasingly difficult. The goal of most puzzles is to get to the other side so you can go through a magic door and progress. There are also more difficult rooms where you end up solving a bunch of different puzzles to send power to the Eiffel Tower and unlock a skill for yourself. These are all the basics you would expect in a puzzle platformer. You get the ability to run, jump, hold items, kick items and a few others. These abilities, combined with your ability to walk on walls, lead to some fun puzzles that consistently throw new tricks at you until the game ends.

Youropa can only be so good. It does make me kill dogs.

Everything from using objects to avoid rain to pressing switches to activate fans and everything in between. There is a great mix here that stops it from ever becoming stale. It’s just a shame water hurts you. (If only there was something like waterproof paint. Like that will ever happen!) My favorite part of the game is when it takes a break from puzzles and goes into some sliding sections. Your paint covered characters start slipping and sliding down on oil and while these sections aren’t as fast as I would like, they are still enjoyable.

Along with the normal puzzles are vehicle sections. The vehicles start with a pogo stick and turn into a van. Unfortunately, these are the worst parts of the game. Besides the pogo stick, the vehicles pretty much just act as another way to slide but you have even less control. The pogo stick is pretty fun for the one puzzle it was used in. Hopping around different platforms to activate rings was a nice break from the puzzles. It’s a shame the other vehicles aren’t anywhere near as good as this. It would have been better if they all did something unique, but the moped and the van pretty much just do the same thing. They act as breaks from the puzzles, but are rather cumbersome and detract from the Youropa’s enjoyment.

There are also some enemies doing their best to make sure you don’t solve the puzzles. There are rain, big guys, and dogs. The big guys are the Onesiders and they serve as the main enemies. They tower over you and will chase you whenever they see you. Most of the time they are simply an obstacle. They aren’t very hard to avoid and if you get caught, they are also easy to outrun. The dogs, on the other hand, are an actual threat. They are quick and just love to bite down on your paint covered body. They also usually come in swarms, so it is easy for one bite to turn into several. The dogs can be defeated by a few quick kicks and serve as a fun challenge. Rain is… well, rain, which should be benign, but ends up being a bit of a problem when you’re dealing with paint. All in all, the enemies feel more of an annoyance than a threat.

I may or may not have kicked that box over there forcing me to restart the level.

While you’re out solving puzzles, there are plenty of items to collect along the way. There are 130 parts to collect and 10 different spots to graffiti. These parts are used to unlock more items in the level editor. If you are interested in creating your own levels, then these parts are worth collecting. According to the developers, the level editor is the same one they used to create all the levels in the game and I believe it. There are a lot of options available and I can see some creative minds putting the editor to good use. While it may take time to figure out how to do everything, the editor is rather easy to use and the only limit on it is your creativity.

Youropa is a fantastic puzzle-platformer that constantly evolves. The puzzles keep getting bigger and better as they throw new twists at you. While some of the vehicle sections are a bore and the Onesiders don’t feel like a threat, it doesn’t detract from the overall experience too much. The game also features one of my favorite protagonists since they are just so fun to decorate. While the game may fumble in a few places, the overall experience is great and enjoyable, even if they make me kick dogs.

Youropa is a fantastic puzzle-platformer that constantly evolves. The puzzles keep getting bigger and better as they throw new twists at you. While some of the vehicle sections are a bore and the Onesiders don't feel like a threat, it doesn't detract from the overall experience too much. The game also features one of my favorite protagonists since they are just so fun to decorate. While the game may fumble in a few places, the overall experience is great and enjoyable, even if they make me kick dogs.

Austin Fern has been playing video games his entire life. The first console he truly fell in love with is the PlayStation 2 with Sly Cooper, God of War, and many others really leaving an impression. He enjoys all genres of games from FarCry 5 to Danganronpa and everything in between.
Related Articles: youropa
Share
Tweet
Share
Submit