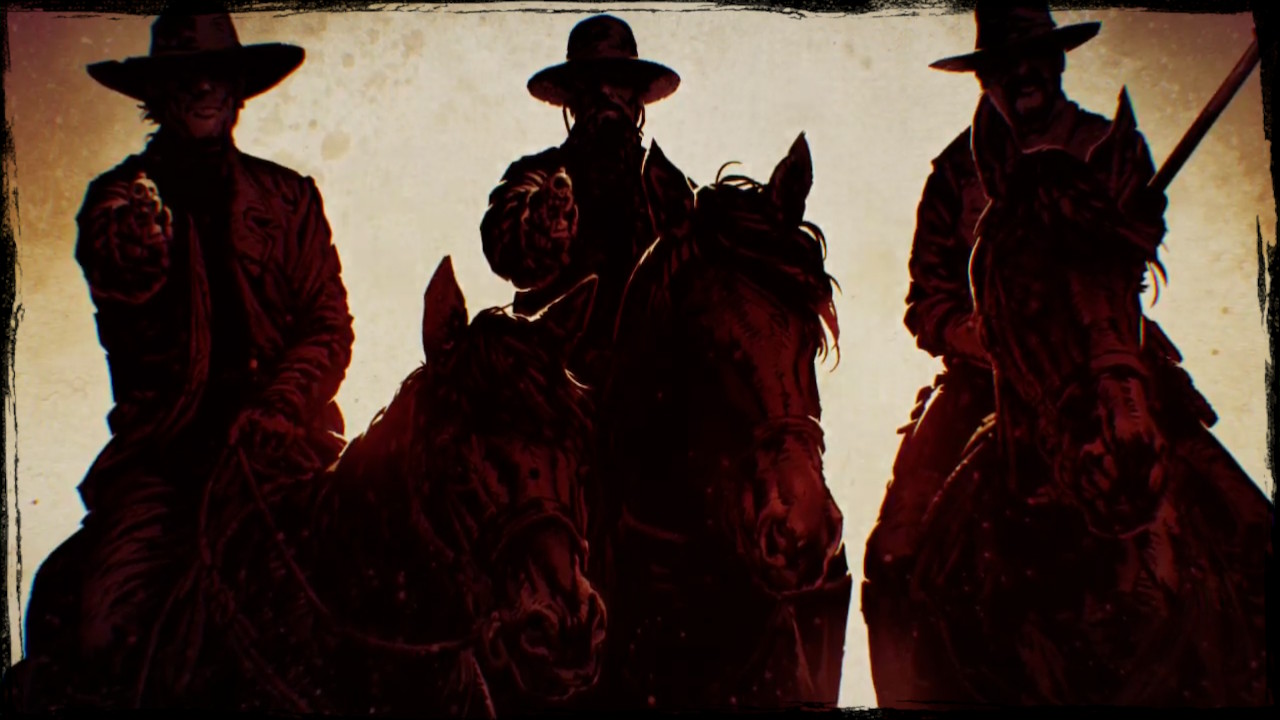 The western has existed as a genre teetering on the edge of reality. Sure, it’s aesthetic and events are somewhat based on real events, but usually it’s so far removed from the truth that it might as well be a form of fantasy. Call of Juarez: Gunslinger offers bits of both worlds; you can live out the fantasy of a wild west bounty hunter while also learning about real people, places, and events.

In Gunslinger, you experience the tale of Silas Greaves, bounty hunter extraordinaire. It’s a story he’s actively telling while you play too; sometimes the other bar patrons listening will ask questions and he’ll skip around in the story or he’ll say he was running low on munitions and suddenly you’re almost out of bullets. Other games like Bastion have done the whole narration as you play thing, but unlike Bastion the storyteller isn’t narrating what you’re doing and instead telling you what happened next while the level actively changes. It’s a very interesting take on the idea, and it never got old through the game’s runtime. It’s easy to tell when Silas is exaggerating his story as that’s when the game gets really difficult. I lost count of how many times he said “there must have been at least a hundred of ‘em” when I was forced to gun down wave after wave of enemies. It’s used just often enough to keep you guessing about what’s going to happen next, but not so often that it feels random or unfair. 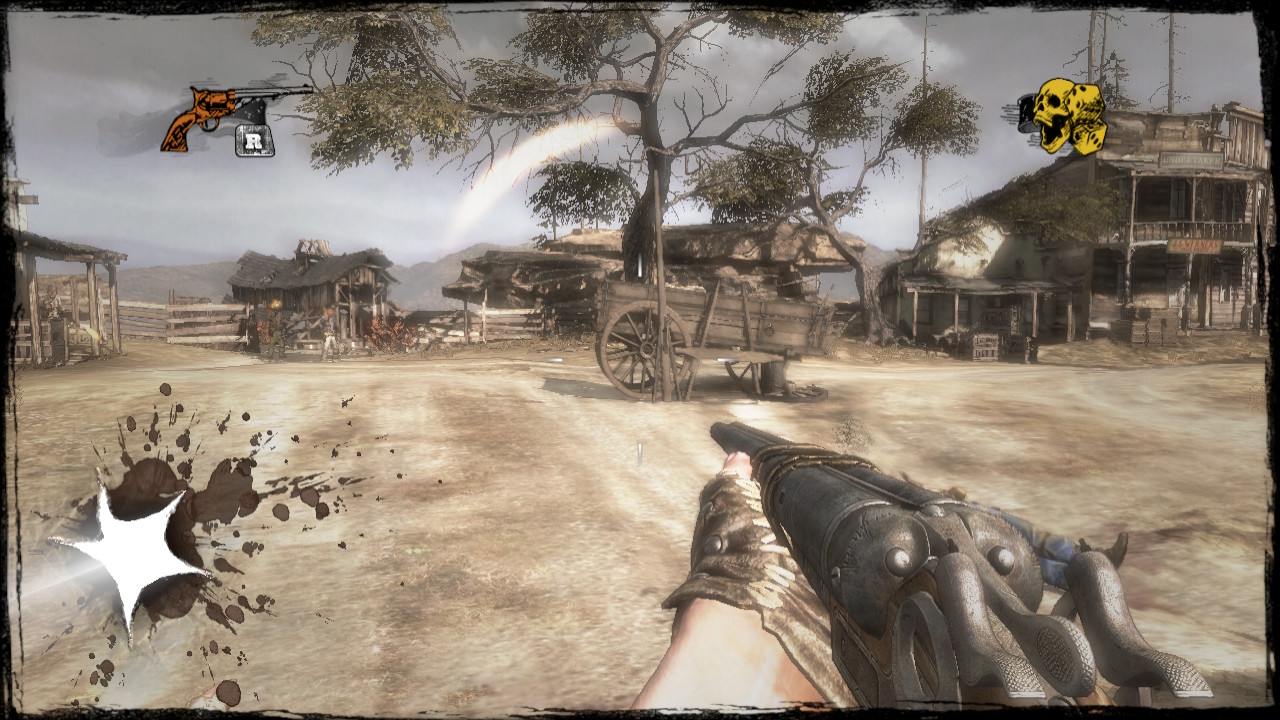 Gunslinger reminds me a lot of old light gun arcade games. It’s not on rails, but many environments are set up for you to stand in one place and shoot enemies like a shooting gallery. You’re also encouraged to kill enemies in quick succession to increase your score and replay levels through the arcade mode, new game +, and the Nuggets of Truth sprinkled throughout each level which unlock some real history about a person, place, or event. This arcade style of design conflicts with some game mechanics. Silas is very squishy, he can only take a few hits before he’ll need to sit behind cover and regenerate HP and if someone happens to hit his head it’s over, so if you try and rack up a big combo you’re likely to either die or break it by waiting for your health to regen. You’re meant to use a bullet time meter and the Sense of Death ability, which lets you dodge a bullet that would have killed you, to keep your combo going for longer, but I never had enough of the former to last me very long and the latter is too inconsistent in its function to rely on. This conflict of level and mechanics design ends up making the game incredibly difficult, even on normal.

There were many times in my playthrough where I thought I was doing well only to be instantly killed by an enemy I couldn’t see and have to start over from a checkpoint. I played the new Switch port for this review, mostly in portable mode, and the difficulty was increased by the smaller screen. The game runs perfectly well portably, I couldn’t really notice any visual differences between it and TV mode, but as a result of being smaller, enemies are much harder to see from any real distance. In addition to this, when you take damage there’s a neat bullet-holes-in-paper effect that unfortunately covers large portions of the screen. So while the arcade-like nature of the game would work great on the go, you just can’t see anything. Activating the slow motion will also highlight enemies in red, even if your meter is empty, but it doesn’t really help much when the screen is covered with bullet holes. 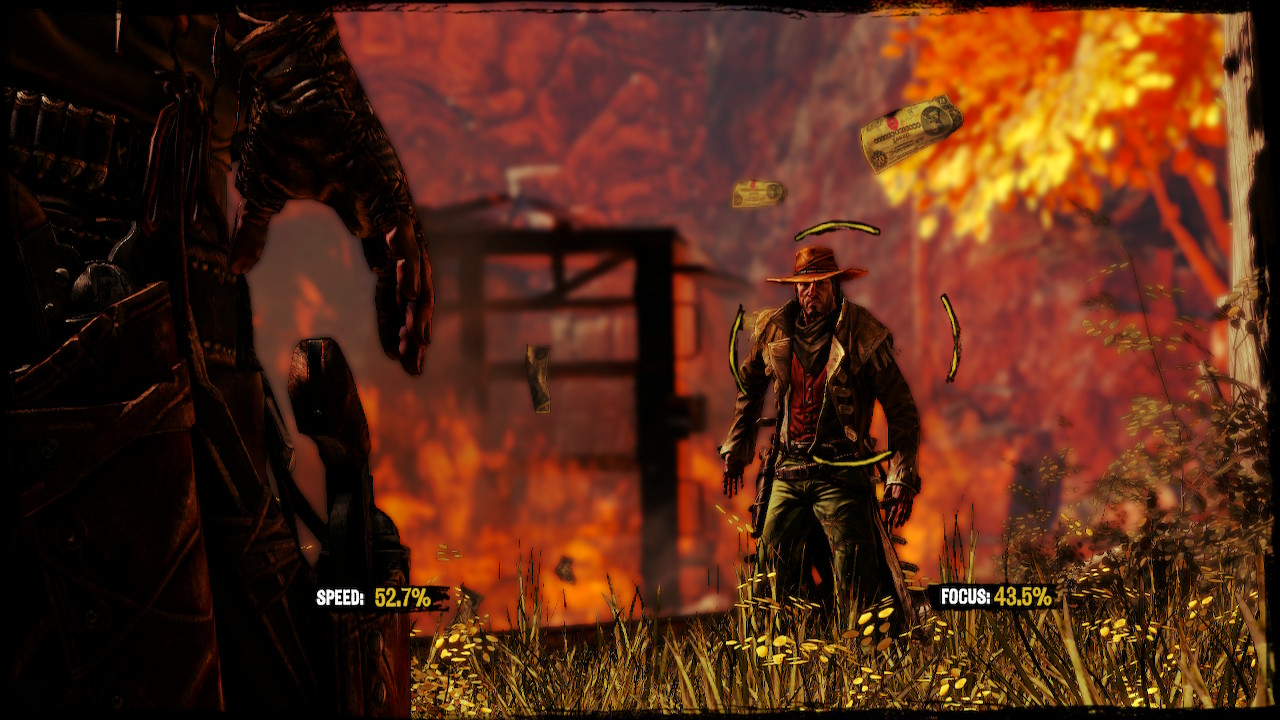 At the end of each level, you’ll partake in a classic wild west showdown, often against a real outlaw from history. You have to keep a reticle focused on your opponent (or opponents) to aim more accurately and your hand hovering over your revolver to quickly draw it when the time comes. Once you hear a heartbeat sound effect, you can draw and fire on your foe, but what makes these much more interesting is the concept of honor. While you can draw before your opponent for a better chance to shoot first, history will remember you as a coward. Instead, you’ll want to wait for the moment they reach for their gun and only then draw yours, which will give you a better score. While I died quite a few times during these segments, often times because the aiming reticle is very slippery, I was never tempted to draw first and get it over with because of the way the game phrased it as being less honorable along with the wild west setting.

The story and setting are what Gunslinger excels in. Locations are varied yet believable, every actor sounds like they belong in a western, and some sound effects sound straight out of an old film. While the plot isn’t too deep, the characters are simplistic, and the level design and game mechanics feel at odds with each other, the narration and bits of historical accuracy are enough to keep you playing to the end.

David is the kind of person to wear his heart on his sleeve. He can find positives in anything, like this is a person who loved Star Fox Zero to death. You’ll see him playing all kinds of games: AAAs, Indies, game jam games, games of all genres, and writing about them! Here. On this website. When not writing or playing games, you can find David making music, games, or enjoying a good book. David’s favorite games include NieR: Automata, Mother 3, and Gravity Rush.
Related Articles: Call of Juarez: Gunslinger
Share
Tweet
Share
Submit