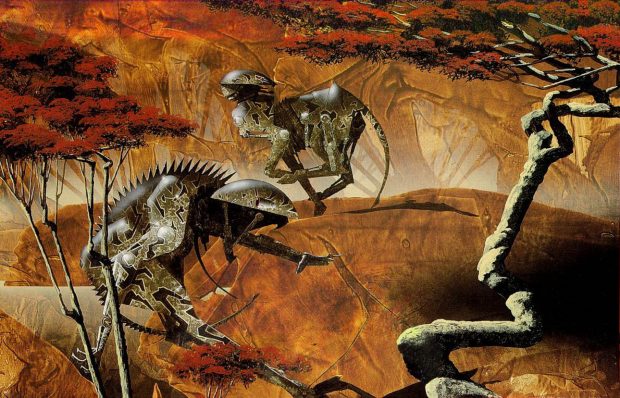 Shadow of the Beast is one of the reasons I play games today. Back on my Amiga 500 I set off across this side-scrolling alien landscape, brutally eviscerating foes in my bid to avenge my father’s death at the hands of the evil lord Maletoth. It was unapologetically difficult, had music well beyond its time (thanks to composer David Whittaker), and visuals that put every game in 1989 to shame. Fast forward 27 years, and developer Heavy Spectrum Entertainment Labs is looking to resurrect this groundbreaking icon for a whole new generation.

The team at Heavy Spectrum wanted to pay homage to the original title, while updating it greatly for the PlayStation 4. The storyline is the same — Maletoth kidnaps the main character, Aarbron, as a baby, cursing him and transforming him into a vicious killing machine, complete with sharp claws and curved horns. As one of Maletoth’s minions, Zelek escorts him to an altar where another baby awaits sacrifice, Aarbron strikes down a priest only to learn that it was, in fact, his father. This realization snaps him back to reality, allowing him a momentary respite from his magical collar, and opening a brief window for him to strike at his masters. Wounded, Zelek snatches the baby and flees, leaving behind it a trail of blood and enemies to bar your pursuit. Aarbron, now free of his shackles, must pursue him across the land of Karamoon to break his curse and save the child.

Shackled, you are a slave to Maletoth

One of the things that made the original Shadow of the Beast as gorgeous as it was for its time was the parallax scrolling system. Up to thirteen independent images would scroll through the background, creating incredible depth for what was ostensibly a 2D game. It was revolutionary for the time. Heavy Spectrum kept this look intact, rendering far more than thirteen independent background images, but now those images are 3D and have motion beyond simple scrolling. It keeps the unique feel of the original Shadow, whilst simultaneously updating it to match the significantly upgraded look of the remake.

Beyond the visuals of this parallax background idea, this new iteration utilizes foreground and aft, frequently requiring Aarbron to use portals between them to press forward or discover the many hidden memories and upgrades that await him. When combined with the incredible sense of scale on display, it makes it far more seamless and less ‘tacked on’ as it blends old and new.

The team at Reflections Interactive also wanted to build a bigger sense of scale into the original Shadow of the Beast, and this often manifests in monsters that are far taller than Aarbron. The final boss in the original was represented as a massive foot and fist as the game didn’t have any sort of camera repositioning, leaving much of this battle to the player’s imagination. In this current iteration, we obviously have a fully-realized 3D world, allowing the camera to showcase incredible vistas and fantastical creatures in all of their cinematic glory. As a result, many foes Aarbron faces are far larger, but now we can see all their majesty. Twisted, disgusting, or angular and biomechanical creatures are rendered to exquisite detail, every boss more impressive than the last.

I can’t talk about the original Shadow of the Beast without talking about Roger Dean. If you’ve ever seen the surreal album artwork for the prog-rock bands Yes or Asia, you’ve seen Dean’s work. His alien biomechanical art style permeated every bit of the original game, bringing it to life in the backgrounds, the monster design, and of course, the box art and logo. New fans are able to see for themselves as the Roger Dean art cover for the original game, and a short retrospective about the Shadow of the Beast trilogy’s original release are on offer as unlockable gems.

Roger Dean’s artwork continues to be amazing, even today.

Equally as important to the original was the David Whittaker score. Ian Livingston steps in as composer for this remake of Shadow of the Beast, and it’s a triumphant effort. Driving beats with ethnic drums and marimbas, trilling flutes and deep thrumming horns press you onward. It’s tonally different, but it’s very fitting and beautiful. I was happy that I could unlock the original David Whittaker score, dropping it into the new game, but I only enjoyed the old-school new-age sound for a while before flipping back to the Livingston score — that’s high praise indeed.

The 2.5D side-scrolling combat in this new Shadow of the Beast is as visceral as it is fast-paced. In the early levels, you can get by without performing a lot of special attacks or being very specific in the way you approach. Generally, if you block and have decent timing, you’ll prevail. As you encounter foes with shields, longer weapons, or faster speed than Aarbron, you’ll need to be far more precise in your movements and timing to take them out without losing health. Over time Aarbron’s powers will expand, allowing him to grab, impale, and throw enemies, as well as stealing their weapons and unleashing them.

Your fight will take you to many dark places.

Ripping through foes banks blood for Aarbron to spend on his more powerful moves. Spending three bars of blood uncorks a Rage Chain that prompts a direction and attack button to one-shot your enemies. This Rage Chain requires crack timing, and a single miss ends the chain. It won’t earn you a lot of mana, but it is good for cutting through scores of foes quickly. When you get hurt, and you will often, you can expend one blood bar to tackle your foe and rip the life from them. Several moves in your arsenal will have you hammering a button to successfully pull off, but the game isn’t a quicktime event-laden affair — it’s more about having sharp reflexes and impeccable timing.

Aarbron has one other power that ends up being more multi-purpose — the Smart Bomb. This attack releases massive spikes from the ground, killing all enemies on the screen. Beyond destroying foes with the Smart Bomb, this skill is also used to break apart Prophecy Orbs. Much of the story in the original relied heavily on the player to fill in with their imagination, and this current iteration continues that tradition, but with a twist. As you complete levels and find these orbs, the background story is revealed in timelines, creating clarity on the area you just tackled. It’s a slick way to tell the story, and it allowed me to enjoy the mystery and then unlock clarity.

As you obliterate foes, viscera and blood will cake the screen, racking up precious mana. Mana is used for the host of upgrades available to Aarbron beyond the aforementioned unlocks. Each engagement is graded throughout the level, and the game provides a medal rating from Iron to Gold, as well as pushing your results to the global leaderboard. Surprisingly, there is an online component lurking in the dark as well. When you die (and you will) you are presented with an option to consume an innocent soul to resurrect yourself on the spot, or use an Elixir to bring you back. You have unlimited innocent souls to sacrifice, but Elixirs are only found in the Shadow Realm. A socially-interactive element (and entirely optional), this Shadow Realm allows you to encounter a glimmer of where another player has died. You can then choose to release that soul, granting them an Elixir, or you can earn extra mana by consuming their soul. It’s not as invasive as what you might find in a Souls game, but it does create a bit of interactivity.

This world is full of fantastical beasts.

Mana can also be used to unlock Forbidden Tomes. As Aarbron has lost his power of speech, these tomes unlock subtitles for the languages encountered in the game. Whether it’s Common (the human tongue), Mage, Hydrath, or the other various beasts you’ll encounter, understanding what they are saying to you in subsequent runs of the game only adds to the story. Beyond these simple unlockables, or the various bonus goodies, there are also upgrades to Aarbron’s various skills. Health upgrades, longer stun, higher yield of blood from kills, and more powerful skills are available, once you have enough mana to unlock them. There is no ‘natural’ progression in Shadow of the Beast — you get what you’ve earned.

To help you combat the difficulty of the game, there are also fifteen talismans to unlock. These modify a variety of things, such as slowly recharging blood, adding a shockwave to a successful stun attack, and more. Like everything else, these have a mana cost to equip, but they can change the tide of a difficult battle. You can only select three at a time, so careful planning is key.

Parallax scrolling at its finest.

If you’ve not gathered by this point, Shadow of the Beast is chock full of secrets to uncover. I’m a completionist, and I know full well that I didn’t find a great many of them. I will not spoil the storylines on offer, but suffice it to say that Heavy Spectrum has filled this game with far more to discover than I expected.

As a bonus for diehard fans, and those interested in trying out the original, the team at Heavy Spectrum painstakingly emulated the Amiga version of the game as an unlockable extra. Given the extreme difficulty of the game, they’ve also been kind enough to add an “infinite lives” toggle, as well as a video “let’s play” to help you “youngins” get through the merciless original. The red emulation lines on the sides of the 4:3 aspect ratio, the familiar Psygnosis and Reflections logos — I was back in my bedroom in 1989 all over again. I can’t thank the team at Heavy Spectrum, Psygnosis, Reflections Interactive, and Sony for making this more than a fond memory for me.

Shadow of the Beast

Not all remakes are successful, but Heavy Spectrum’s new take on Shadow of the Beast is a triumph across the board. It has enough nostalgic throwback to draw in fans of the original, but plenty of updates for a new audience. I sincerely hope we can count on them and Sony to return to the lands of Karamoon for Shadow of the Beast II.

Ron Burke is the Editor in Chief for Gaming Trend. Currently living in Fort Worth, Texas, Ron is an old-school gamer who enjoys CRPGs, action/adventure, platformers, music games, and has recently gotten into tabletop gaming. Ron is also a fourth degree black belt, with a Master's rank in Matsumura Seito Shōrin-ryū, Moo Duk Kwan Tang Soo Do, Universal Tang Soo Do Alliance, and International Tang Soo Do Federation. He also holds ranks in several other styles in his search to be a well-rounded fighter. Ron has been married to Gaming Trend Editor, Laura Burke, for 21 years. They have three dogs - Pazuzu (Irish Terrier), Atë, and Calliope (both Australian Kelpie/Pit Bull mixes).
Related Articles: Shadow of the Beast
Share
Tweet
Share
Submit