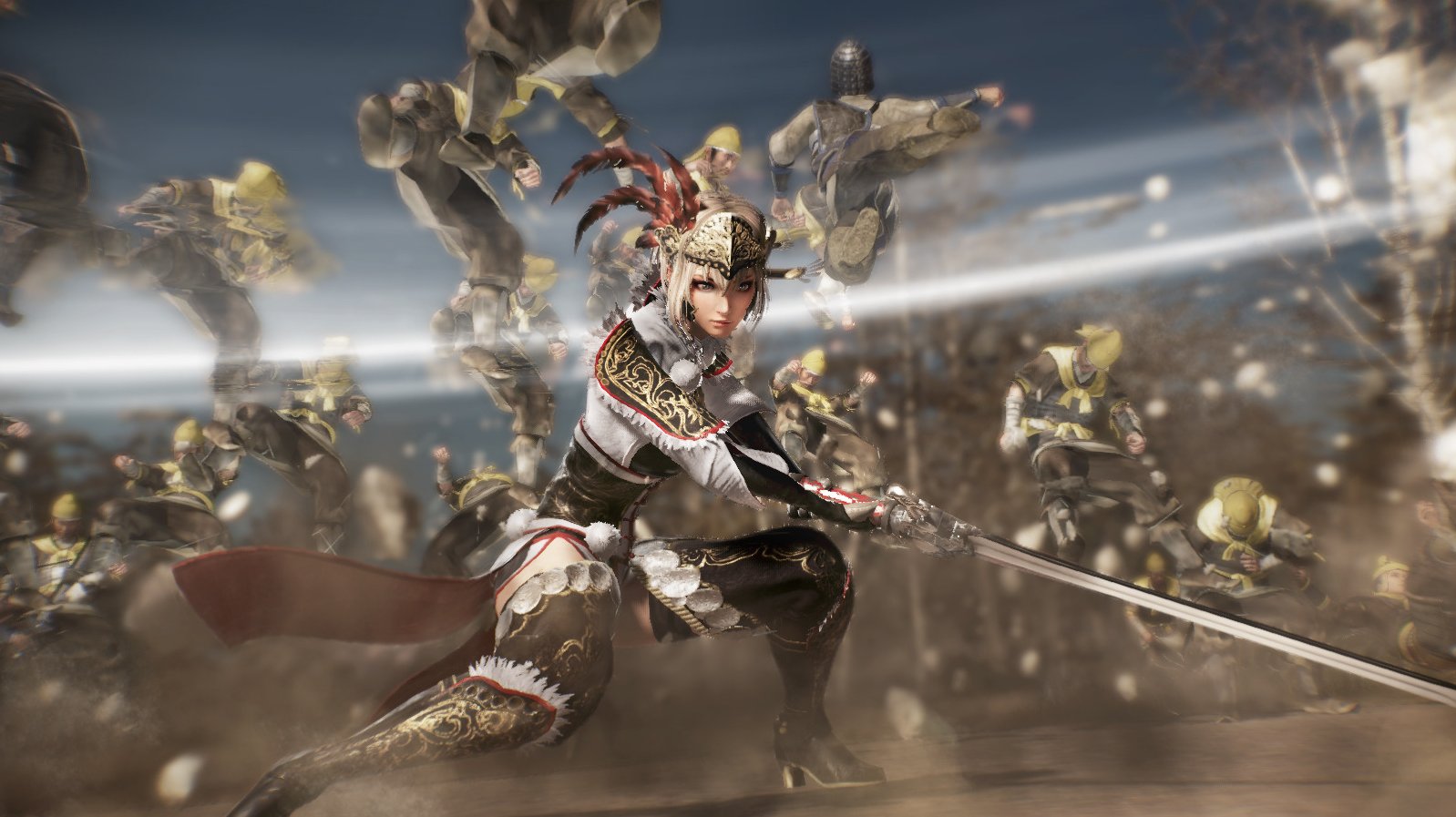 Get ready to decimate hordes of enemies as you make your stand in the newest edition to the Dynasty Warriors series. Whether you’re a longtime fan or a newcomer to the series, if you want to feel like nothing can take you down, you’ve come to the right place. Have no fear and run right into the crowd as demonstrate your skills on the battlefield.

Upon starting a new game, you’ll find that you have five different groups to choose from. Your choices come in the form of the Wei, the Wu, the Shu, the Jin, and the Others. Each one of these groups has their own set of characters that allow you to play through the story from their point of view. Unfortunately, there are very limited options to start with, including Cao Cao of the Wei, Sun Jian of the Wu, and Liu Bei of the Shu. Fear not, for there is ample opportunity to play as other warriors. As you play through the story, more fighters will be unlocked. Sometimes only one new character will be unlocked, while other times you can unlock five or six warriors at once. The cast reaches up to 90 characters, so be ready to see the character unlocked screens a lot.

Now, just because you’ve unlocked a character doesn’t mean you can play as them from the beginning of the game. When choosing a chapter to start from, the game provides you with the characters that are involved in the events of that chapter. If you don’t see who you’re looking for, they may not come into play until a later chapter. Thankfully, as long as you’ve played up to a given chapter with at least one character, that chapter will be available to play through with anyone that has been unlocked. That being said, there are a total of 13 chapters, but not every character will make it through all of them. So jumping into the story of a variety of warriors will allow you to experience more of the storylines and give you more insight into the events that are unfolding.

After picking your fighter and starting the game, you’ll be given the chance to do the action tutorial, which I recommend taking the time to do. It doesn’t take long and is the perfect chance to test out how your warrior fights and lets you see their moves. The basics of fighting boil down to flow attacks(pressing square), reactive attacks(pressing triangle), and your Musou attack(pressing circle). Flow attacks are your main combos, while reactive attacks are more situational. For example, if an enemy is about to attack, pressing triangle when the prompt comes up can counter them, or if the prompt comes up when their health is low, it will become a finishing blow. In other situations, it functions as a potential guard break. Your Musou attack is a special move that can devastate enemies nearby if your Musou bar is completely full. Alternatively, if you press R1 along with any of those buttons, including the addition of X, it changes the attack. Square becomes a stun, triangle becomes a launch, X is a knockback, and circle becomes a smaller special attack. You can use these combos together in order to wreck your foes.

Taking your newfound skills onto the battlefield is the meat of the game. Most of the enemies you will face are run of the mill soldiers with nothing special about them, but that won’t be on your mind. You’ll be too busy hacking, slashing, and smashing through them as you work to achieve your goals. There will be slightly stronger versions of those soldiers in the form of captains. The equivalent of bosses are other warriors that you can unlock later. The fights against the cannon fodder enemies aren’t tough, but the other warriors can sometimes give you a good challenge depending on the situation. When facing off against them, you may need to break through their guard or maneuver around them in order to take them down. This is a nice change of pace from the common soldier and shows that they are on the same level as you are.

Outside of battle, you are given an open world to explore. There are towns that offer a variety of services, such as coin collectors, dilettantes, stables, traders, teahouses, shopkeepers, and blacksmiths. Coin collectors will let you trade in coins you find for rewards, while dilettantes offer rewards based on points you obtain from hunting. The stables let you purchase, sell, and store horses. The teahouses offer meals and let you advance time. The traders, shopkeepers, and blacksmiths are your typical shops where you can buy, sell, and craft items, weapons, accessories, and gems. Gems can be equipped to your weapons in order to add bonuses to them, including increased damage or even adding elemental effects to your attacks. Gems can be added or removed an unlimited amount of times, so you can easily swap old ones out for something better.

Dynasty Warriors 9 also includes its own version of side quests, although there’s not much to them. There are two versions that you will come across: some are optional objectives that can potentially make main quests easier, while some are requests made by NPCs. The optional objectives are usually either taking out enemies in order to claim a location or defeating them so a path is cleared for your allies. The requests boil down to either eliminating specified enemies at a marked location or bringing requested items back to the person. I’ve noticed that if you accept multiple requests at once, the enemies may all be at the same area. This allows you to not only complete more than one at a time, but it also adds an extra challenge, as you have even more enemies to deal with. For example, I battled a group of lumberjacks, a pack of wolves, and two groups of bandits all at the same time for three requests. There’s something about taking them all out together that adds to the unstoppable warrior feel you get from the game.

In addition to side quests, you can also go hunting with a bow and arrow or go fishing in the rivers. It’s funny that you can go from slaying hundreds of men with ease to fishing in such a short time. Oddly enough, you can also catch random items that can be sold at the shop other than fish. There’s not much to the fishing, but it’s there to give you a relaxing activity if you so choose.

The world is vast and there is plenty of area to explore, but for those who don’t like long travel times, there are two options: your horse and fast travel. The horse can be called at any moment and it will run right to you, allowing you to move quickly along the landscape. If you have a destination that feels too vast, you can also fast travel. You can fast travel to towns, small bases, and in certain instances, you can move either directly to your destination or to a random spot nearby. This is especially helpful for when you’re in a hurry to get somewhere. At the same time, the world has been given plenty of care in order to make it feel open, and the environments are wonderful to bask in. That being said, there are times when you can notice grid lines showing up along the ground or in the trees. Another issue I noticed was there were a few times when my horse or a nearby NPC would be invisible until I interacted with them. These could possibly be addressed in a patch or two, but nonetheless, it wasn’t enough to take me out of the world.

The story itself is nothing to go crazy for, but that doesn’t mean that it’s bad. The storylines of the warring parties are interesting to observe and play through, but it wasn’t my main drive to move forward. Getting to experience the different sides of the conflicts adds to the replayability, which I’ll be doing plenty of. Piecing together the multiple aspects of the stories along with testing out other characters to experience their playstyle are easily worth the time. The overarching story is the same, but the nuances are what is important. Speaking of which, at the beginning of each chapter, there is a narration about the events that have unfolded thus far and what issue has arisen now. This is a nice touch, especially if you take breaks from playing between chapters. My one issue with this is that there are moments when the narrator gets cut off mid-sentence. It’s jarring and feels like someone accidentally cut the audio too soon when editing. Once again, this could potentially be resolved with a patch, but it doesn’t take away from the meat of the game. The character dialogue is corny, but there’s no issue with that. In fact, I feel that it adds to the overall charm of the world.

In the end, Dynasty Warriors 9 is a great choice for anyone that wants to feel powerful as they annihilate hundreds of enemies on the battlefield. With a large cast wielding a variety of weapons, there is plenty of replayability to keep you hooked. The world is vast and ready to be explored, so be sure to make the most of it. Soon enough, you’ll be wiping out all that oppose you everywhere you go.

Whether a die-hard fan or a newcomer to the series, Dynasty Warriors 9 is sure to delight lovers of the hack and slash genre. The story is interesting enough to keep you playing, but the main focus will be on the combat. The open world aspect of the game gives you more freedom of choice, which players will appreciate. There are a few issues, but nothing too overwhelming.

Codi loves to play video games and watch movies. He will watch almost any kind of movie just to experience them. His ideas take inspiration from the shows and movies he watches, and games he plays. He also loves a good pun.
Related Articles: Dynasty Warriors 9
Share
Tweet
Share
Submit