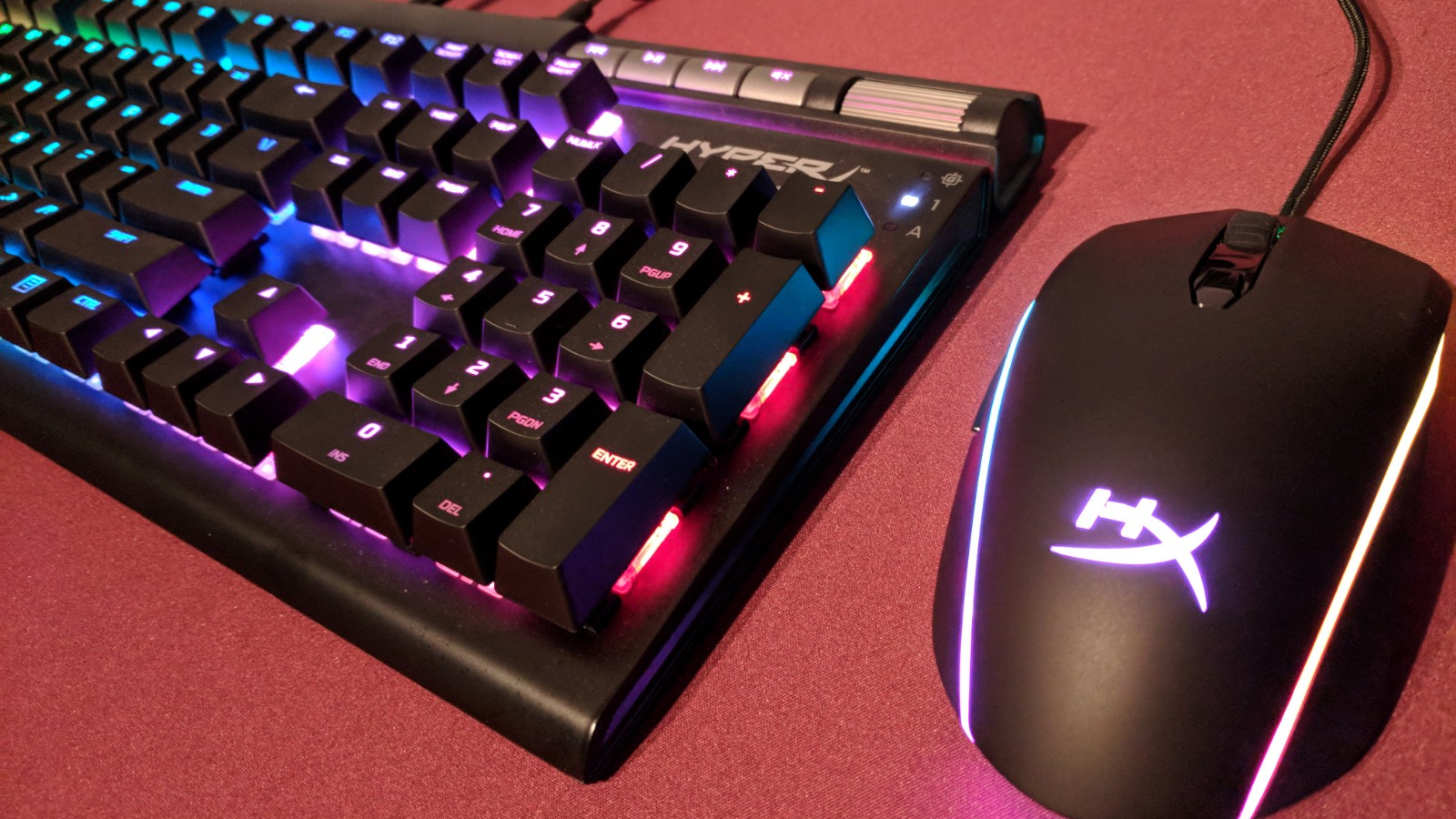 HyperX has been on a roll lately. In August of last year, I took a look at their HyperX Alloy Elite keyboard (my review), and I came away supremely impressed. I also checked out the Pulsefire Gaming Mouse (my review) and again had high expectations that were met. Now, they’ve released an update to both products, so I wanted to check out what’s new under the hood to see if they’ve iterated on their already-solid design.

The HyperX Alloy Elite RGB keyboard and the Pulsefire Surge both share many of the same features as their predecessors, but with enough differences to take a closer look. While these really are a matched pair, they are sold separately, so we’ll tackle them as such.

The Alloy Elite RGB keyboard is a steel-framed mechanical keyboard, which is to say that each key is an individual switch instead of riding on a big rubber membrane. In this case, this board uses Cherry MX switches — my personal favorite. Cherry, one of (if not the) oldest switch manufacturers, is arguably the best switch builder in the business. There are quite a few Cherry switches to choose from, with Blue, Brown, and Red being what’s on offer from HyperX, just as they were in their previous boards.

Cherry MX keys with lights underneath

In a brief overview of the switch types, it may seem that the small differences would be imperceptible, but they can be the difference between a kill or a death in gaming. Brown switches have a detent-style throw with an obvious ‘break’ point in depression, but without the clicking noise you might expect. Blue switches are more traditional type switch, offering resistance and an obvious snap as you type. The Alloy Elite RGB I am reviewing has the Red type – my personal favorite. Red switches are a smooth motion with no detent, and a linear 45 grams of needed force to depress it the 4mm travel distance. They are a bit taller than your typically throwaway Dell keyboard keys, but they are incredibly comfortable for writing long reviews, surfing the web, and gaming alike. In fact, I’m writing this review on one right now, just as I did for its predecessor.

The steel keyboard frame is just the top of a long list of differentiators between this board and any you might stack against it. The thick USB cable is protected with a heavy braided jacket with a rubber grommet to prevent any damage at the base of the keyboard, or at the plugs. The steel is a charcoal black with a trio of macro keys for lighting management on the top left, a Game Mode key (disables the Windows key to guard against accidentally popping out of a game), and the usual array of play/pause, rewind, and fast forward buttons, flanked by a scroll wheel-style audio roller on the top right. If you are comparing against the previous boards, you’d be hard pressed to conclude that they are anything but identical…until you plug them in.

The biggest addition to this new board is a RGB strip across the top, as well as a bit more control over the colors under your keys. You can continue to use this board without the software, but installing HyperX’s NGenuity software opens up a world of colorful backlighting.

Lights off, if that’s your thing.

The previous iteration of this board could glow, pulse, and “wave” a red color across the keys. With NGenuity, you have more direct control over these via profiles. The three preloaded profiles won’t show that off as they simply show the red lights across the board as we had before, but making new profiles is a breeze. Clicking on the plus button in the lower left of the screen creates a fresh profile to customize, after which you’ll tie this profile to the .exe of a specific game. At this point, you’ll be presented with a color-coded keyboard map that you can further customize. I personally like the ability to designate specific keys I’d like to disable when inside a game — sometimes you just want to kill off accidental key presses before they happen. Dragging the icon for your newly created profile lets you push it into the board’s onboard memory profile, letting you swap between three of them (without opening the software again) by simply pressing the profile key on top of the keyboard. Being able to color code your keyboard helps your hands find the right spots when you are at a darkened LAN gaming party, or if you keep your gaming space as dark as a dungeon. Beyond that, it just looks cool.

Beyond color coding, the macro system in NGenuity is equally as easy to use. Selecting your built profile and clicking customize lets you access the macro engine directly. Selecting the Macro Library lets you build a macro from scratch, recording your key presses, adding delays, and otherwise customize your button presses. This is handy in a game where you take the same actions over and over, such as purchasing gear at the start of the round. Better still, you can save these macros as a file on your PC, meaning you can share them with others, or import ones that the community has built.

Speaking of community profiles, there is a very strange collection of pre-built ones awaiting you in the game library. Games like Fortnite, Overwatch, PUBG, Destiny 2, Skyrim (because, of course Skyrim), and DOTA2 make plenty of sense, but Another World (yes, the game from 1991), Unreal Tournament, and XCOM seem a bit dated. It would have made more sense to tackle the sequels to those games. Still, with such a simple engine to build your own, it’s hardly an obstacle.

If you are truly crazy and want to build a technicolor display, the NGenuity software also lets your program each and every key on the board. This means you can put a different color under every key. You can’t complain about the colors offered when you can choose them from pretty much every shade under the sun. Above the keyboard there is also an 18 LED strip of lighting that you can equally customize — light up the night however you see fit.

While the software is easy to use, it could use a patch or two. I had a crash to desktop while programming a macro, losing all of my work. I should have applied the RPG logic of “safe first, save often”, but lesson learned. I also had trouble shaking the profile once I’d quit a game. After closing out Ni no Kuni II: Revenant Kingdom (which I heartily recommend – you can check out that review here), the carefully crafted color pallet I had made wouldn’t quit back to my all-red windows default profile. I ended up opening the NGenuity software and then closing it, which reminded the keyboard of my intention. It’s an odd bug with an easy solution.

The price tag on the Alloy Elite RGB, despite the new features and controllable backlighting underneath every key, has gone up, but only a little bit. With an MSRP of $169, it puts it in the same category of the likes of peripheral mainstays like Corsair, Steelseries, and Logitech — an amazing feat, given that HyperX has only been on the scene for a short while.

Setting the keyboard aside, I was eager to see what the Pulsefire Surge would bring to the table over its predecessor. Utilizing a Pixart 3389 optical sensor (the Pulsefire Surge used a Pixart 3310, with the 3389 widely considered the current top-shelf for optical sensors) for the ‘eye’ of the mouse, and Omron switches for the mouse buttons (those are rated for over 50 million clicks – which, I believe equates to four games of Diablo III. I kid, of course), the HyperX team started off on the right foot for their mouse platform.

Like the Elite RGB, the cord on the Surge RGB sports a braided cable sheath with rubber grommet ends to ensure that any pinch points don’t become wear spots. Light at just 105 grams (a deck of cards is 94 grams, for an easy comparison), the Pulsefire Surge RGB weighs just 10 grams more than its predecessor. Why? A whole lot of lights.

The RGB portion of the name comes from the 360 degree RGB LED light ring that encircles the top of the mouse. Tied to the same NGenuity software that the Elite RGB keyboard uses, the lighting on the mouse can be not only controlled, but also tied to profiles. In fact, you can tie the mouse to the keyboard, using the same profile to switch up the colors on both peripherals. If you are, as an example, a StarCraft player, you can even tie things like your DPI settings to colors, letting the people on your stream see what profile you are using and when.

Speaking of DPI, one of my only complaints with the original Pulsefire was the somewhat low DPI resolution. Ranging from 400 to 3200 DPI with the click of a physical button, the mouse was on par with midrange mice, but had the capacity to play with the big boys. Moving to the Pixart 3310 does exactly that, pushing the resolution up to a whopping 16,000 DPI. Clicking the physical button to move between the profiles enables highly accurate movements, which are critical for high-twitch shooters and heavy-micro RTS titles.

The large skates help the mouse tackle any surface.

Like the Alloy Elite RGB, profiles you create can be stored as files, and they can be mapped to the hardware button just above the scroll wheel. This allows you to set up the color and DPI settings for three games, changing on the fly without the need to open up the software. Unlike the keyboard, I never had any issues with the mouse exiting a profile, so it seems like that bug is an isolated thing.

At $69.99 MSRP, this mouse is right in the sweet spot for a gaming peripheral. The switches will hold up to any amount of abuse, and the extra-large skates on the bottom should work on nearly any surface. The previous iteration has been my daily use mouse for nearly a year, and I have no doubt that this new one will be a worthy successor.

With sturdy and comfortable construction, combined with top-of-the-line switches, the Alloy Elite RGB keyboard and Pulsefire Surge RGB mouse are a perfect combination for any gamer. After a patch or two, the software will be up to snuff, letting HyperX compete with the biggest names in the business.