Developers and game designers have a multitude of things to consider when coming up with ideas. Not only do they have to think about the visuals, gameplay, and sound design, but they need to think about the game’s premise, the intention behind the experience, and so much more. Sometimes they aim for action-packed enjoyment, sometimes it’s filling you with dread, and others just want their ideas to come forth as art. The latter of these ideas allows for games to come in a large variety of forms. The upside is that unique experiences can be created, but the downside is that the ideas can end up being lackluster. Pattern is a game that’s seemingly the creator’s way of speaking their mind and showing what they can do. While I appreciate the effort and intent, Pattern unfortunately leans towards the lackluster side in my eyes. 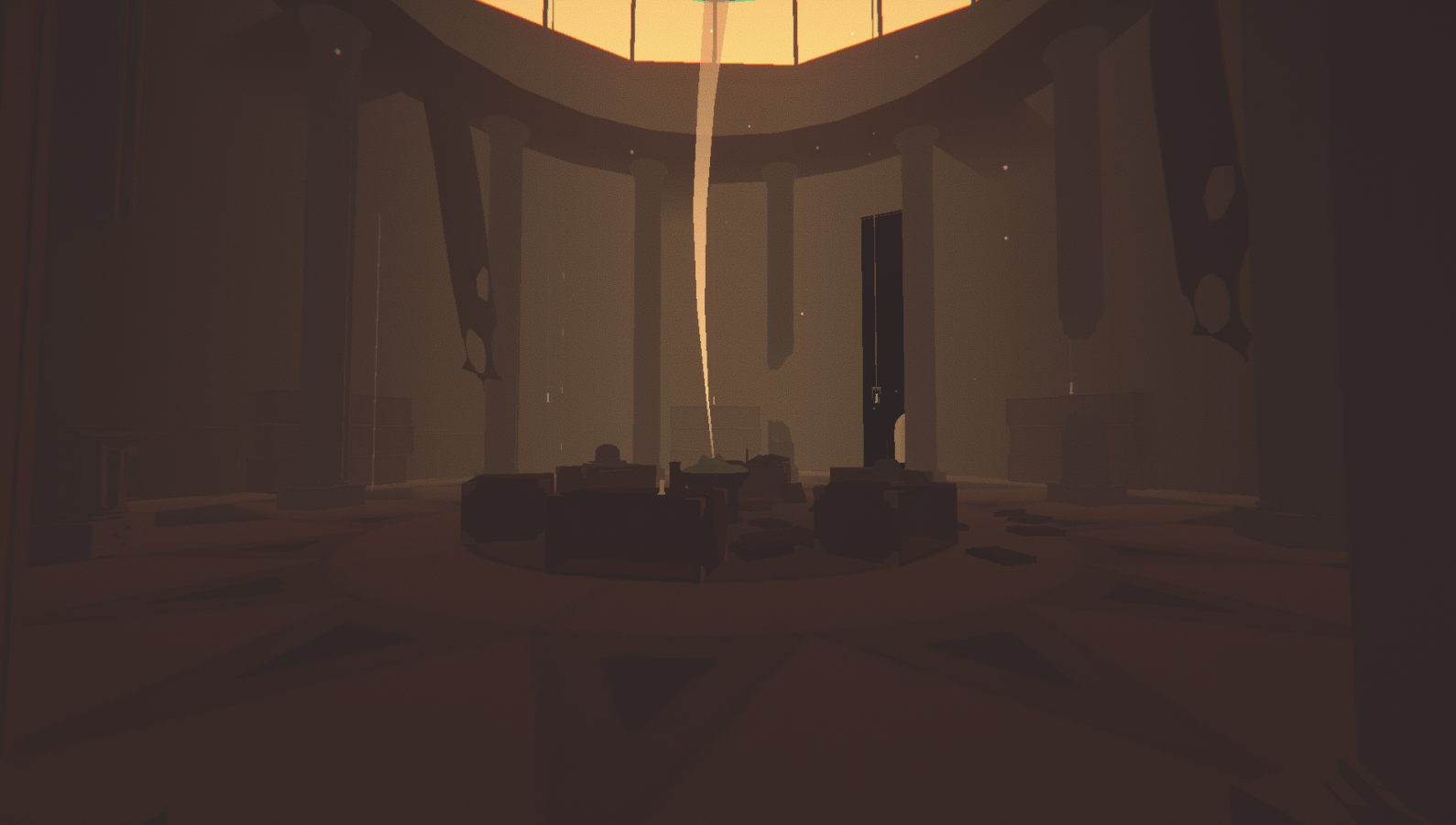 Pattern starts off in an abandoned looking temple of sorts that serves as a hub world. You have a small area to walk around in, but there’s nothing else to do except walk up to the campfire in the center of the room and rest. Resting causes your character to close their eyes slowly and then you open them up as you awaken in a new location. From here you have two options: you can explore the world to your heart’s content or you can make your way to the next campfire immediately. As with the first campfire, it triggers rest and sends you to a new area. If you’re looking for campfires, you can find them by spotting the rising smoke high in the sky. Each area has multiple campfires, although you’ll typically have to travel pretty far in order to find the others. From what I noticed, different campfires send you to different areas. For example, one campfire in the first forest area may send you to a desert, while one that’s down by a stream in the first forest area may send you to a snowy tundra.

Your actions in the world are limited: you can walk, sprint, climb, and glide. Doing any of the latter three takes stamina, which refills on its own after a short time. Since this game is about exploration and hearing what the creator has to say, there’s no fall damage or death. So if you lose stamina while in the air and drop like a rock, nothing bad happens. I do have to admit that gliding feels nice and it’s a great way to get around after you’ve climbed up high. 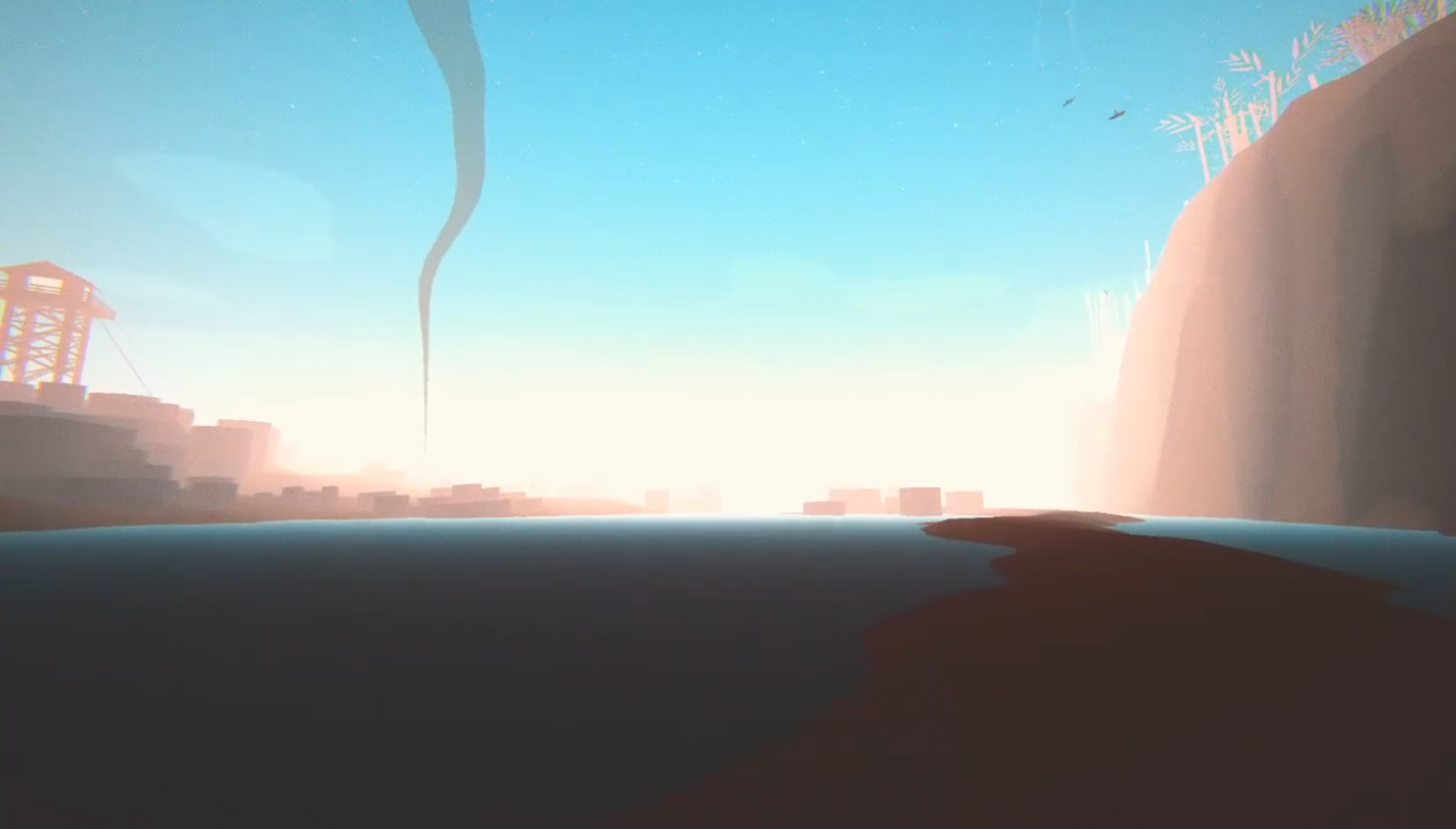 The visuals are really neat, especially since the environments form in front of you as you walk around. There’s a certain draw distance that shows you there are things out in the distance, but things don’t appear in detail until you get closer. So you may see grass suddenly grow in front of you or giant apples fall out of a tree. This design choice makes the world feel unnatural and mysterious, but that helps fuel the desire to explore. Seeing all of the trees, bamboo, streams, birds, ruins, snowy peaks, etc. that the world has to offer is relaxing and a treat for the eyes, but the problem is that it wears on you fairly quickly. I spent about an hour exploring the various landscapes, transporting to a new one after I’d traveled a great distance, and repeated. Even with the interesting designs, there’s not much to keep you playing for long. Sure, the environments around you are great to look at and discovering new things is neat, but it gets repetitive after a little bit. I reached “the end” so to speak, or what seemed like the end because it took me to a black screen that said “Pattern.” From there you can just go back in and do what you did before. 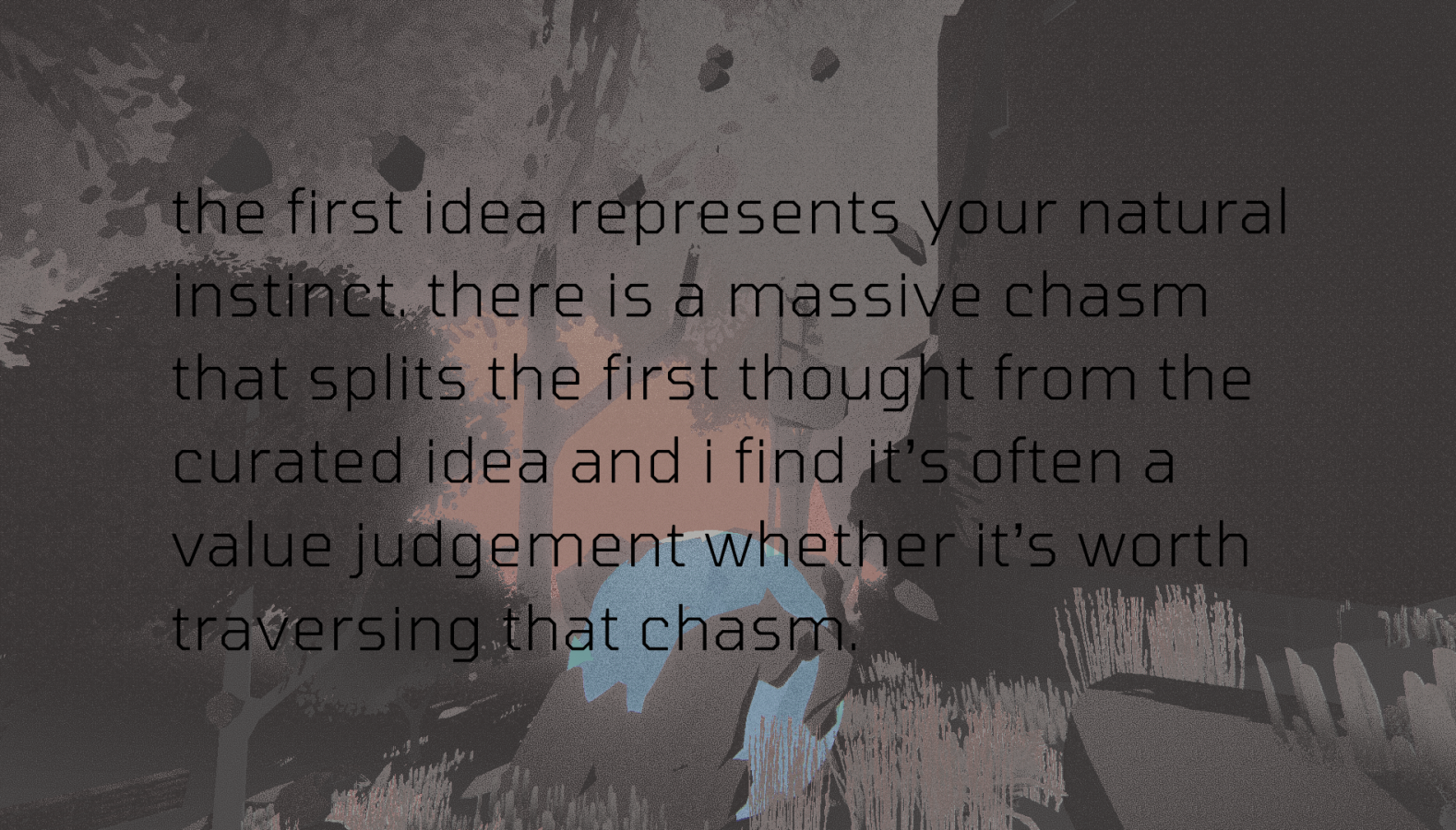 I did mention that the game featured what the creator wanted to say, so let’s touch on that. There are large blue orbs scattered around that cause a large segment of text to pop up on your screen. These quotes are the creator’s thoughts and feelings about the game, their process making it, and on game design in general. These little bits of information are unexpected but interesting. It tells a story of how Pattern was made, albeit in a general yet vague kind of way. The point comes across, but it feels more like a look into their mind than anything else. That’s not a bad thing, but not what people picking this up may be expecting. All that being said, I think it’s nice that the person behind Pattern came up with an idea and stuck with it, even to the point of opening up about their mindset and process, but it doesn’t give you much to come back for. It can be nice to play through for about an hour or so at most before you feel like stopping, which is a shame. At the current $14.99 price point, I can’t recommend it, but if it drops down closer to $5 or $10, then maybe I could lean towards it.

Pattern is a unique game about exploring the mysterious lands around you and learning about the creator's mindset. The visuals are a wonder to look at, especially coupled with the peaceful atmosphere. Unfortunately, there's not much else to do and the appeal wears off after about an hour or so.

Codi loves to play video games and watch movies. He will watch almost any kind of movie just to experience them. His ideas take inspiration from the shows and movies he watches, and games he plays. He also loves a good pun.
Related Articles: Pattern
Share
Tweet
Share
Submit