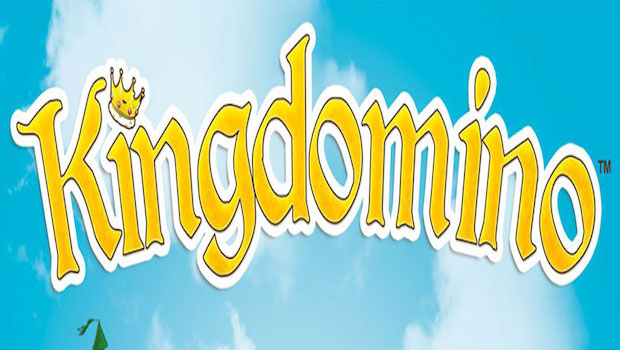 Dominoes has been popular across the globe for centuries. While the depth of Go and Chess have made them timeless, it’s the simplicity and versatility of dominoes that has made it an endearing classic. Many variations of the game exist, and Blue Orange’s Kingdomino is the latest to attempt to improve upon the game’s general principle.

Kingdomino is a tile laying game where your goal is to build a kingdom using landform clad dominos. Each rectangular domino has two beautifully colored sections that depict oceans, deserts, forests, grasslands, swamps, and mountains. Your starting castle sits on a one by one square tile that acts as a wild space for the game, allowing you to connect any terrain to it.

You shuffle all the tiles to begin the game and place them in the game box. A number of tiles are pulled depending on whether you are playing a two, three, or four player game. The back of each tile has a number on it and tiles are flipped to their landform side in numerical order. Each player’s colored meeple is drawn at random and that player picks which tile they’d like to play in the opening round. You’ll also pull the second round of dominoes as well, and you’ll be able to plan a turn ahead throughout the game.

Since you can always see the upcoming column of tiles, you’ll be able to grab what you need or plan to go early to get first crack at the next set.

Each player will have one tile to play per round, and the order of the tiles is significant. Your goal is to claim the most victory points by game’s end. This is done by placing special tiles that have crowns on them. Every variety of landscape could contain crowns, and once placed, the scoring can increase if you connect more of the same landscape to the scoring tile. Each connected landscape acts as a multiplier so if you placed a desert tile with one crown and connected four other desert sections to it, you would score a total of five points (one crown times five connecting desert sections).

Crown dominoes tend to be higher numerically, so this presents some interesting decisions. Whoever played the first domino in a sequence has first choice of which domino they’d like to use in the next round. You’ll have to decide if snatching a scoring tile is worth picking the last domino in the following turn. Still, you can only see the next turn as you are playing the current one. Lady luck may mean you picked first for naught if the next draw lacks anything useful.

The desert here has four crowns and ten connected sections, which would score 40 points.

Once you’ve selected a domino, you will connect it to an existing one by matching up the landscape of one side. The other side does not need to match, but you’ll need to take care that it doesn’t stop you from expanding a scoring area by blocking off the side of another domino.

In addition to looking ahead for the next turn, you’ll also have to consider a long term strategy as well. All your dominoes must fit in a five by five grid at game’s end. Careless planning may mean you are unable to play a domino in the waning stages.

Though you’ll be competing against other players, you’ll often feel as if you are simply playing alone. There’s little reason to pick tiles that block other players as you’ll be more concerned about your own scoring runs. There’s enough terrain choices that players could avoid competing for the same tiles.

Kingdomino has all the hallmarks of a solid game. The shuffled dominoes will result in a new game each time, while it plays fast enough that you can complete several plays in one sitting. The game sets up quickly, and comes with some great components, though it would have been nice for the castles to be a single mold since you’ll need to construct them each time you open the box.

Kingdomino is marketed as a family game, and it certainly fits the part. The game is bright, colorful, and easy enough to attract younger players, though they may need time to pick up the game’s strategy. There’s enough decision making to appeal to adults, so don’t allow the cartoonish presentation to cause you to underestimate it.

Kingdomino hits the sweet spot for family gaming in that has just enough to keep adults interested while still engaging and entertaining children. The strategy is light but there are a multiple things to consider with each turn. Replay ability and speed combine to ensure the game feels fresh with consecutive plays.