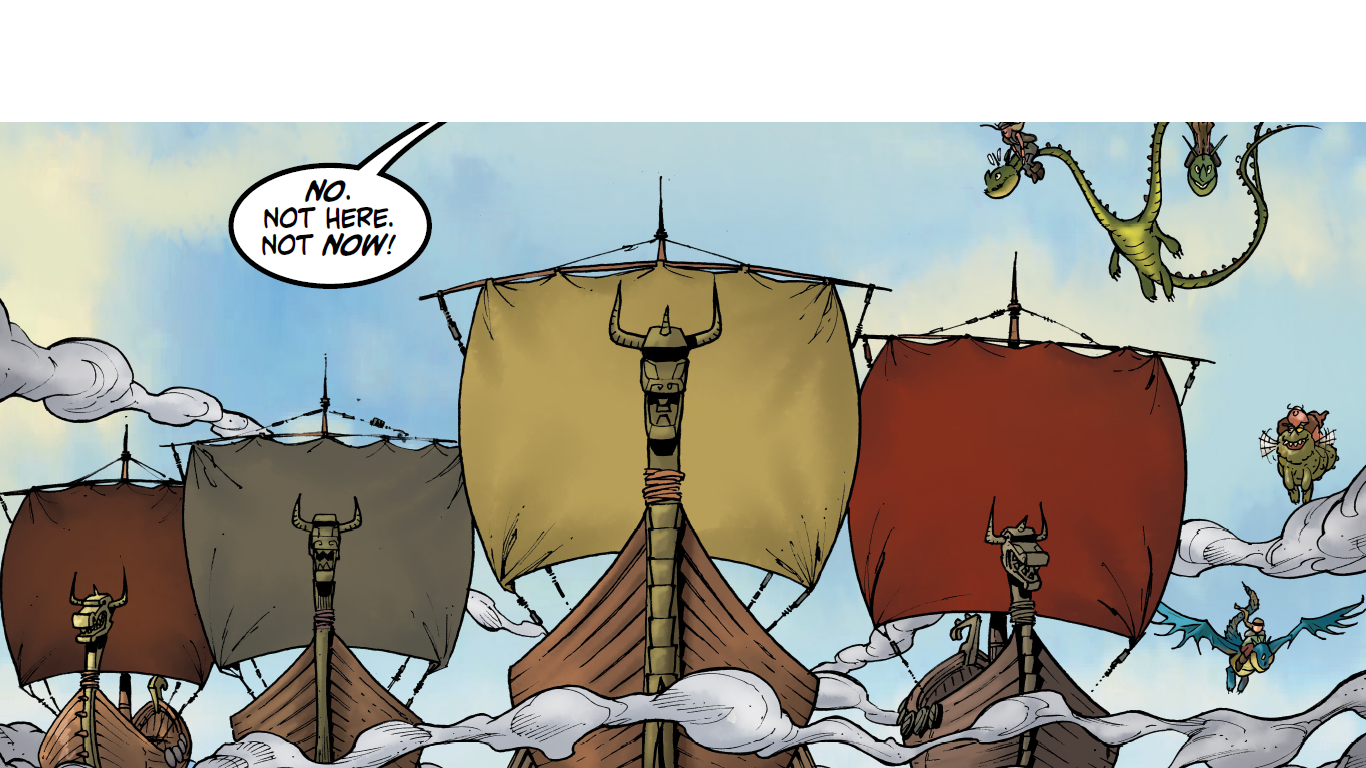 Dragons: Riders of the Berk Collector’s Edition adds to the story of viking dragon-riders from the popular film and television series. This comic series tells new stories, setting out to bring the characters into a new medium. It does that and then stops dead, with no apparent ambition to add new value to the franchise.

My knowledge of the series is limited to the first film, but even that brief encounter left me astounded with its unique aesthetic and vibrant characters. Unlike the film, I never found myself moved, laughing, or surprised by Riders of the Berk. The obvious question is why we should hold a children’s series to such scrutiny, and the answer is just as obvious: the depth of the source material showed us that children’s entertainment can be satisfying. It can move as well as entertain. As a simple tie-in existing to keep up the brand name this serves its purpose.

Nothing contained in these first two stories is actually bad. Things happen quickly and inoffensively, moving from plot point to plot point with as little development as possible. It is not without its character, but only to the level necessary to give each character one defining trait to differentiate them from a block of wood. Two stories are contained in this volume set, but they were to all ends the same. It reads like every children’s show you have ever seen: the villain has a new wacky scheme to get revenge. The only solution is naturally a dragon flying action scene, and everyone learns a valuable lesson about friendship. The villain swears revenge again, surviving miraculously. Throw in some slapstick humor and the barest hint of viking aesthetic, and repeat ad nauseam.

Functional is the word of the day. At some point there was a meeting where they set down the following bullet points: Dragons; comic; story. Those goals have been satisfied with enough talent that no one would by rights call this work bad. The art is cartoony and no one can say it makes the characters unrecognizable. It doesn’t inspire but there is nothing here to really remember.

This is meant to be a grand, epic entry of the ships; instead their stock images laze along the panel, making the point but not doing more

The collector’s edition also ends with interviews with the team and concept art, which may have been a poor inclusion due to its vast superiority to anything that made it into the completed work. If the quality in the book were closer to these brief glimpses captured at the end, we might have had something truly memorable on our hands. I read the electronic edition, so I cannot speak to print quality, but if the content is any sign I am certain it will be perfectly serviceable.

There is not much to say about Riders of the Berk. It exists, and it does not seem to be interested in anything else. Nothing is good, nothing is bad, and there is nothing to take away at the end. A child might be entertained for a few hours, but once that time has passed they will have no reason to look at it again.

Riders of the Berk tells stories in the How to Train Your Dragon world. It does nothing more or less, and it doesn’t want to. Child fans of the series might enjoy it as light reading, but no one else would have reason to consider it.

John Farrell is a legal aid attorney specializing in domestic violence, living in West Chester Pennsylvania. You can listen to him travel the weird west as Carrie A. Nation in the Joker's Wild podcast at: https://jokerswildpodcast.weebly.com/
Related Articles: Beyond the Page, Dragons: Riders of the Berk Collector’s Edition
Share
Tweet
Share
Submit