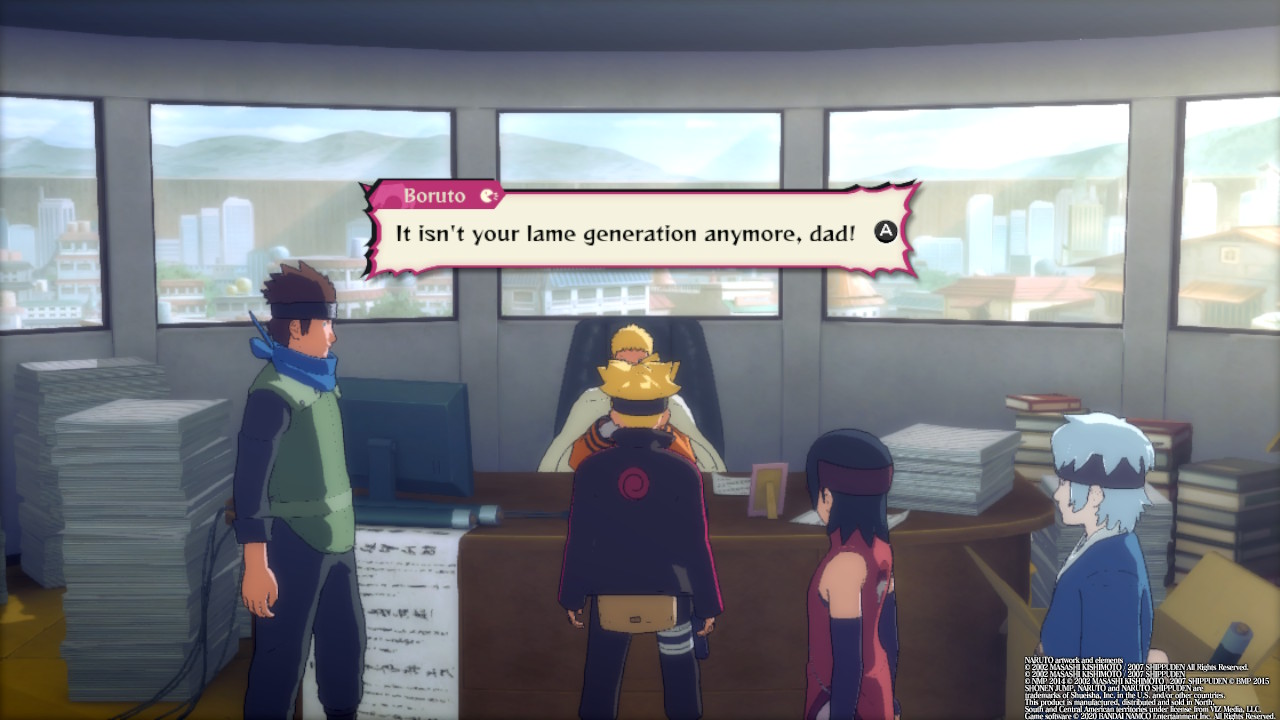 If there’s one series of licensed anime games I would recommend in a heartbeat, it’s the Naruto Ultimate Ninja Storm franchise. A sequel series to the PS2 Ultimate Ninja games, Storm has graced the past couple generations of consoles since 2008, as it’s fanservice and great gameplay mixed into one. While 2016’s Ultimate Ninja Storm 4 (and its huge expansion DLC, Road to Boruto) was the grand finale of the series, it still holds up to this day. Finally out on the Nintendo Switch, Naruto Shippuden: Ultimate Ninja Storm 4 – Road to Boruto has a legacy as long as its title. While it does make some concessions with technical performance, the inclusion of all previous DLC (and then some!) make this a complete package worth revisiting or experiencing for the first time. 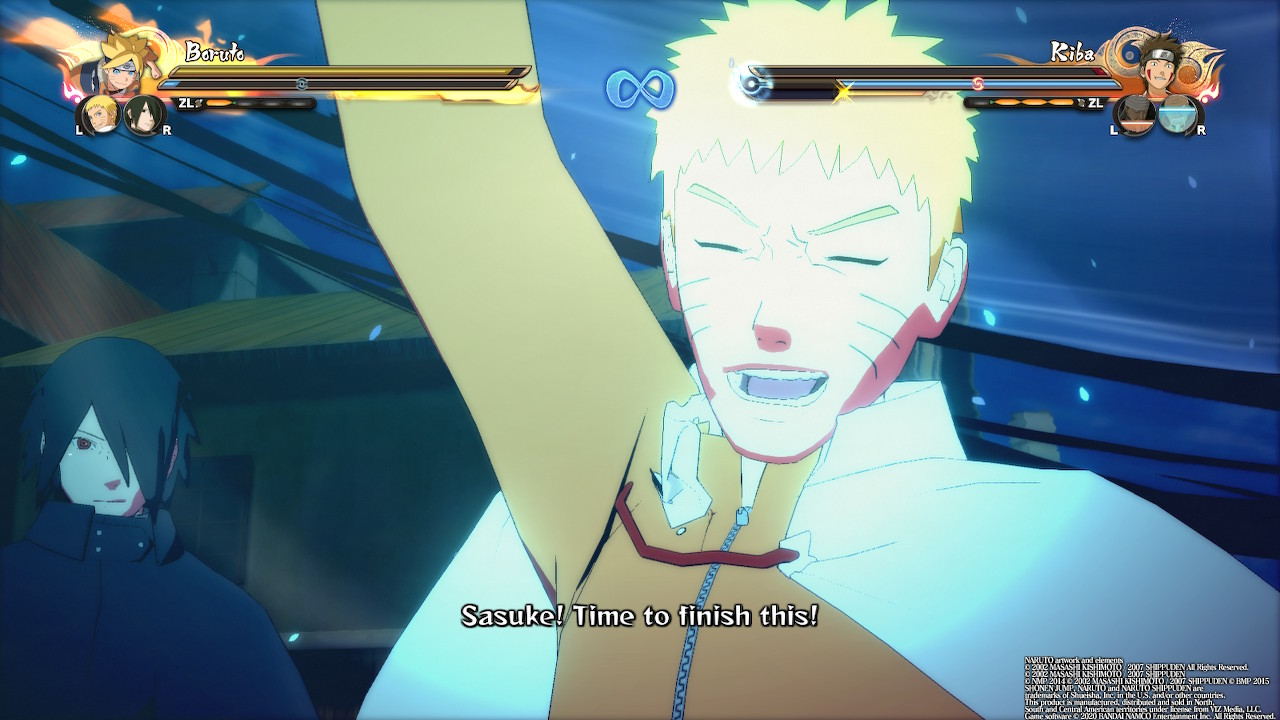 Our review back in 2016 highlights the pros and cons of the original base game, which remains unchanged for the most part. The Ultimate Storm series prides itself on flashy battles with a countless roster of characters and an adherence to the anime’s main plot beats. Admittedly, I stopped watching the anime around the Invasion of Pain arc, though I read the manga to the end and am currently catching up on Boruto: Naruto Next Generations. The first three games are great recaps for the story of the original and Shippuden, while the fourth game’s vanilla content had a few deviations near the Kaguya arc (since the anime was still on at the time). 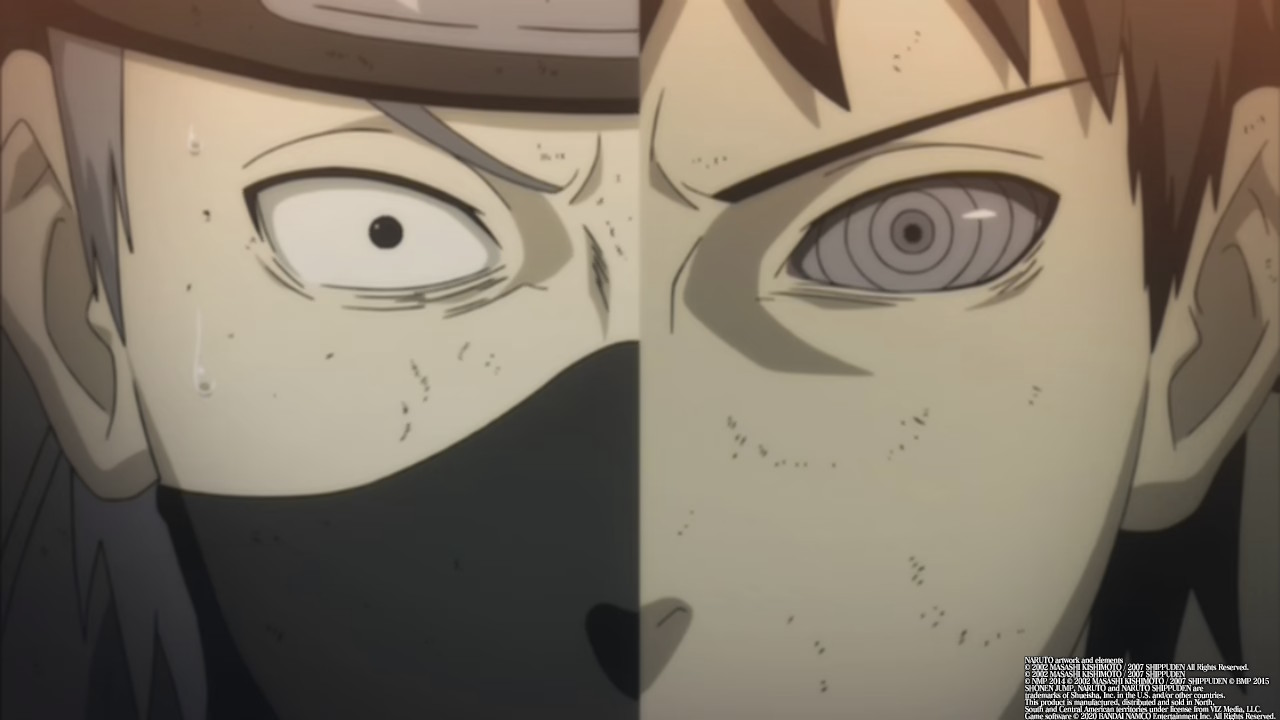 Look, if you came into this review not knowing Tobi was Obito, I don’t know what to tell you.

I do enjoy the streamlined approach of the main story’s execution, as you can play through battles and cutscenes in order rather than taking breaking up the action to navigate an overworld. If you miss the days of breaking boxes for items and accepting random requests, there’s an Adventure mode you can head into that takes place after the events of the main story (which act as an epilogue for the original series as a whole). The Switch version of Ultimate Ninja 4 includes all previous DLC, which means you’ll get story modes focusing on Naruto, Shikamaru, and Gaara. All in all, it’s a meaty package that will last you dozens of hours. With over 120 characters (admittedly, there are quite a few variants of the more important characters ala Dragon Ball FighterZ), there’s bound to be a favorite team you’ll choose; if you don’t want to spend time unlocking characters again, there’s a DLC early unlock pack that will unlock most content instantly, though keep in mind it’s a $2.99 price tag.

In addition to the story DLC (as well as the character DLC that includes the Sound Five) is the addition of the Road to Boruto DLC expansion, which was also included in the PlayStation 4 and Xbox One releases. This expansion centers around Boruto’s dad… erm, Naruto’s son Boruto Uzumaki and his team of Sarada Uchiha and Mizuki. The scenario plays out a truncated version of the Boruto film, which is a teaser for the Boruto: Naruto Next Generations series that would come out in 2017. 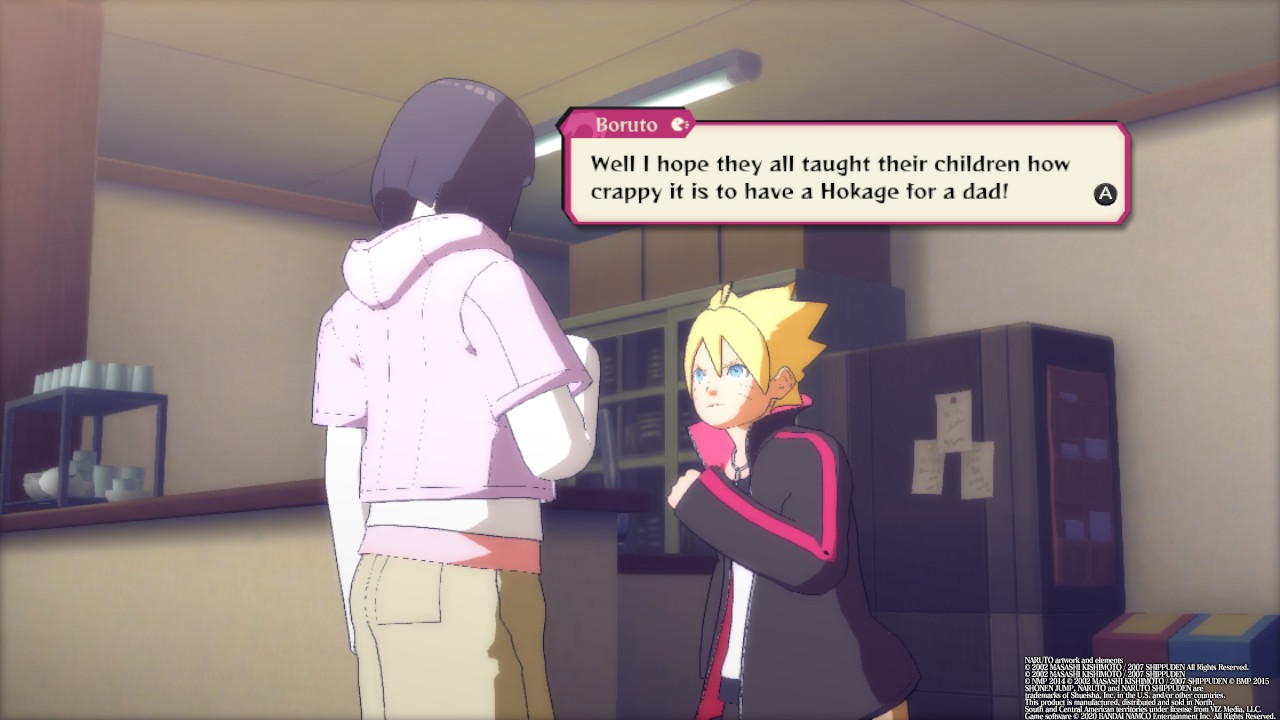 Hey, don’t you talk to Boruto’s dad like that, Boruto.

What the other versions don’t have (rather, you’ll have to pay extra for them on other platforms) is the inclusion of two more fighters, Momoshiki and Kinshiki as well as Boruto era costumes for 11 supporting cast characters. While the two “new” villains have been repurposed from their boss fights from the expansion, it’s still great to be able to play as them now. The addition of new costumes is a nice touch, as the original game wasn’t released back when the currently airing Boruto series debuted. I think the only real oversight that Cyber2Connect could have had was that it needed to add just a few more exclusive characters to the mix. Adding a handful of Boruto characters was fine and all, but now that the anime has been on for nearly three years, we could have gotten a few new plot points or fighters. If you’re expecting to play as anyone other than the main trio or villains of the movie… well, let’s hope we can get a Boruto Ultimate Ninja Storm game soon.

In terms of technical performance, I was surprised with how solid the port of the game was on the Nintendo Switch. While the Ultimate Ninja Storm trilogy was available prior to this release, those games ran on PlayStation 3 and Xbox 360, so it wasn’t too much of an issue to get those on the console. As this game utilizes the technology found on PlayStation 4 and Xbox One, I was a bit concerned with how the game would run in portable mode. Thankfully, the transition isn’t as painful as I had imagined, and the game runs pretty well on Switch hardware. 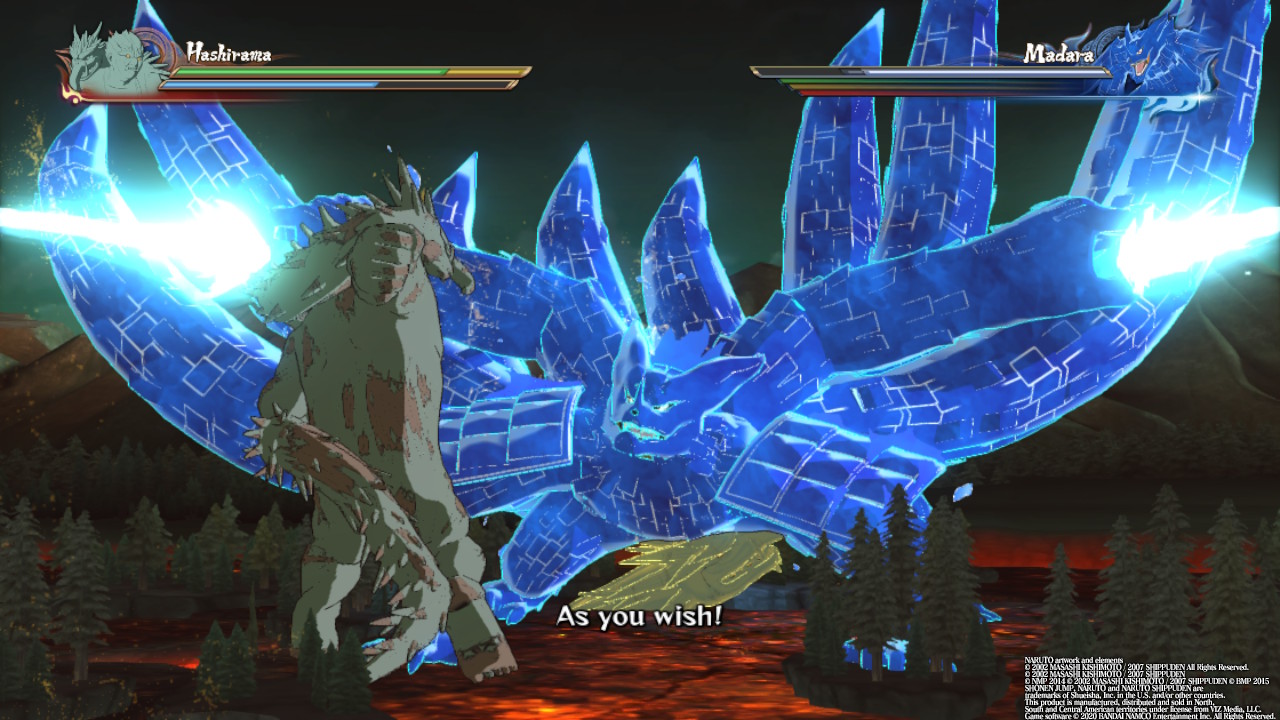 Unfortunately, you’ll have to get used to a lot of framerate dips during cutscenes or during Adventure mode segments, but those are minor inconveniences to how solid the gameplay runs normally. It doesn’t look as pretty as the other versions, but it still has a great graphical style on a big screen television and looks polished on handheld. I actually prefer playing this on the go because of how quick battles can be, and the graphical compromises are less noticeable on a smaller screen. Online works well enough, and while I could only play a few matches at time of writing, the experience was solid (even though I got my butt handed to me by other players). Heck, even the size compression is a plus if you’re low on space; the PlayStation 4 version with Road to Boruto clocks in at over 40 GB, while this version reaches a little over 13 GB of space. With slashing the size in half, I was amazed at how much is retained with this version. 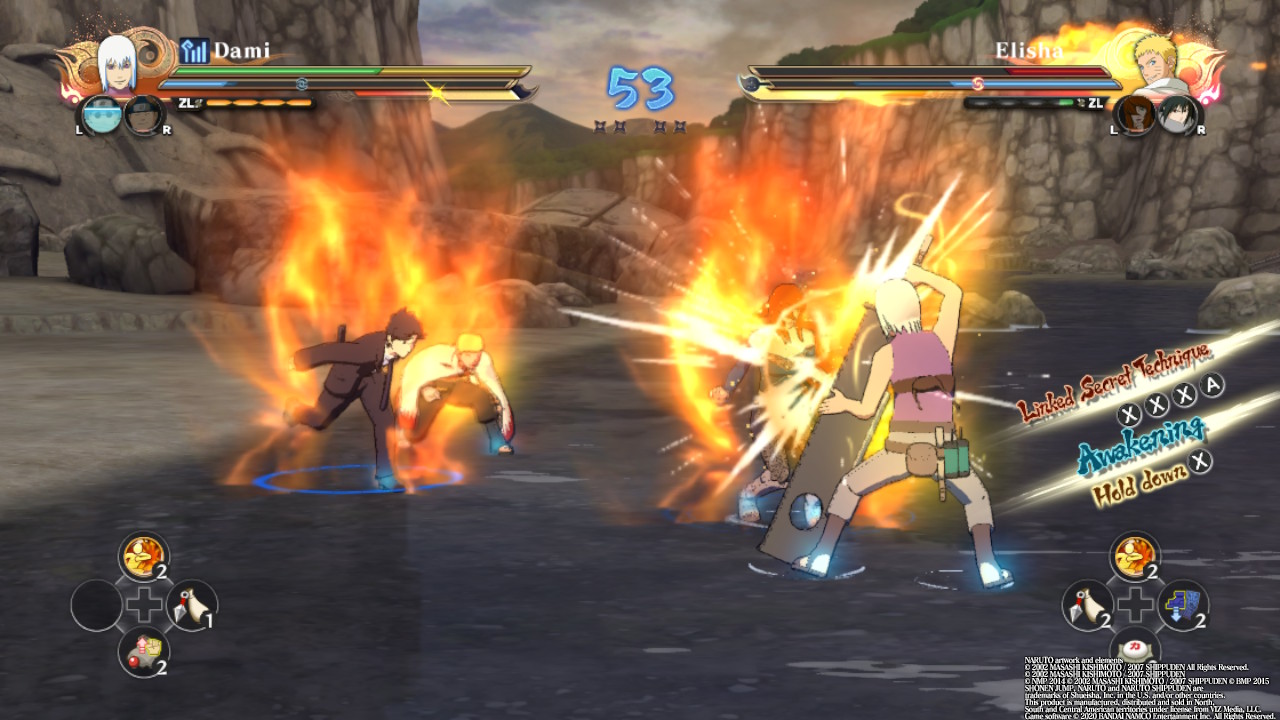 Whether you haven’t played a Naruto game or want to experience the extra Road to Boruto content, Naruto: Ultimate Ninja Storm 4 Road to Boruto is one of the best anime fighters around. Its huge roster of characters, great recap of the last few anime arcs, and awesome porting job make this one a must have on the Switch.

Elisha Deogracias is an aspiring accountant by day, freelance writer by night. Before writing for Gaming Trend, he had a small gig on the now defunct Examiner. When not being a third wheel with his best friends on dates or yearning for some closure on Pushing Daisies, he's busy catching up on shonen manga and wacky rhythm games. Mains R.O.B. in Smash. Still doesn't know if he's a kid or a squid.
Related Articles: Naruto Shippuden: Ultimate Ninja Storm 4 Road to Boruto
Share
Tweet
Share
Submit