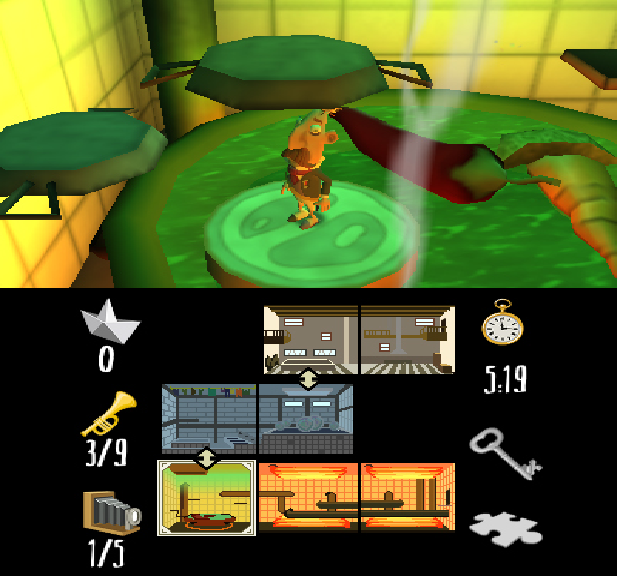 Other than turn-based RPGs, puzzle games have been a genre that has thrived on the 3DS in recent years. While the handheld has seen the resolution of the popular Professor Layton series, it’s also been the home of refreshing games like Virtue’s Last Reward and Box Boy, a couple of great treats for fans of the genre. Enter Delirium Studio’s The Delusions of Von Sottendorff and his Square Mind, an eShop title that hopes to achieve success in the puzzle market. While the game is ambitious with its shifting action puzzles, a horde of problems ultimately prevent it from sitting at the same table as more prominent puzzle games.

You control the eponymous Von Sottendorff as he tries to leave a house constructed from his mind by traveling through the eight worlds (each containing five levels) of his memory. The son of a famous toy company owner, he is accompanied by a passive-aggressive voice-over that chides him at every turn while you manipulate the playing field. Reminiscent of sliding block puzzles, levels are divided into rooms with an exit that must be opened. You can switch each room by using the circle pad or touch screen, enabling different paths through which Sottendorff may traverse. Each level is littered with paper memories (which allow the use of unlockables), puzzle pieces (which allow you to advance in the game), and keys (which will open up the end of a level). Also present are enemies which Sottendorff needs to avoid or defeat with the use of his handy trumpet. Pressing the A button will cause him to defeat enemies or reveal hidden platforms on which to jump.

I’ll admit that this game has potential. The room switching mechanic was promising and led me to retry some levels to figure out a more efficient way to complete them. There were also points where I figured out an exceptionally difficult puzzle and was satisfied when I reached its conclusion. The main gimmick holds up decently well, even if it does become a tad repetitive.

Unfortunately, almost everything else is disappointingly barebones; the graphics, while passable, aren’t too great, and the game looks like a late DS title with its blocky designs. This is further exacerbated by the frequent load screens that occur every time a level is selected or restarted. Waiting around for ten seconds during a stage that I had to retry multiple times was very frustrating. The sound design is also a bit uneven; the game recommends headphone use to take advantage of the surround sound feature, and it was pretty interesting to hear sound effects from different sides. However, the voice acting is grating, with the main voice-over being unhelpful and badly acted (making fun of Sottendorff at every turn), and the other voice acting is too generic to be memorable.

Perhaps the worst offense with the game is its use of action elements. When used well, it can add a layer of complexity and satisfaction to the puzzle experience. However, with this game, it’s very imprecise and makes the game unfairly difficult at times. The main character’s fastest speed is a brisk walk, which makes levels with a fixed time limit a bit stressful. Additionally, hit detection is spotty. Using the trumpet only worked about half the time, and the camera is too unreliable to land on certain platforms correctly. The trumpet mechanic was a bit unintuitive; the game thrives on the liberal use of it, but it only allows nine stored uses per level (which can be refilled through power-ups), which undermines the point of exploration through it. Most of my playthrough was met with broken action mechanics when all I wanted was a true puzzle experience.

The Delusions of Von Sottendorff and his Square Mind

It’s hard to recommend The Delusions of Von Sottendorff and his Square Mind. On one hand, it has a pretty nice room switching mechanic, and if it used a pure puzzle gameplay system, it would be a great title. However, the inclusion of action elements makes the game frustratingly difficult, and mixed with poor presentation, becomes a disappointing mess.

Elisha Deogracias is an aspiring accountant by day, freelance writer by night. Before writing for Gaming Trend, he had a small gig on the now defunct Examiner. When not being a third wheel with his best friends on dates or yearning for some closure on Pushing Daisies, he's busy catching up on shonen manga and wacky rhythm games. Mains R.O.B. in Smash. Still doesn't know if he's a kid or a squid.
Related Articles: The Delusions of Von Sottendorff and his Square Mind
Share
Tweet
Share
Submit