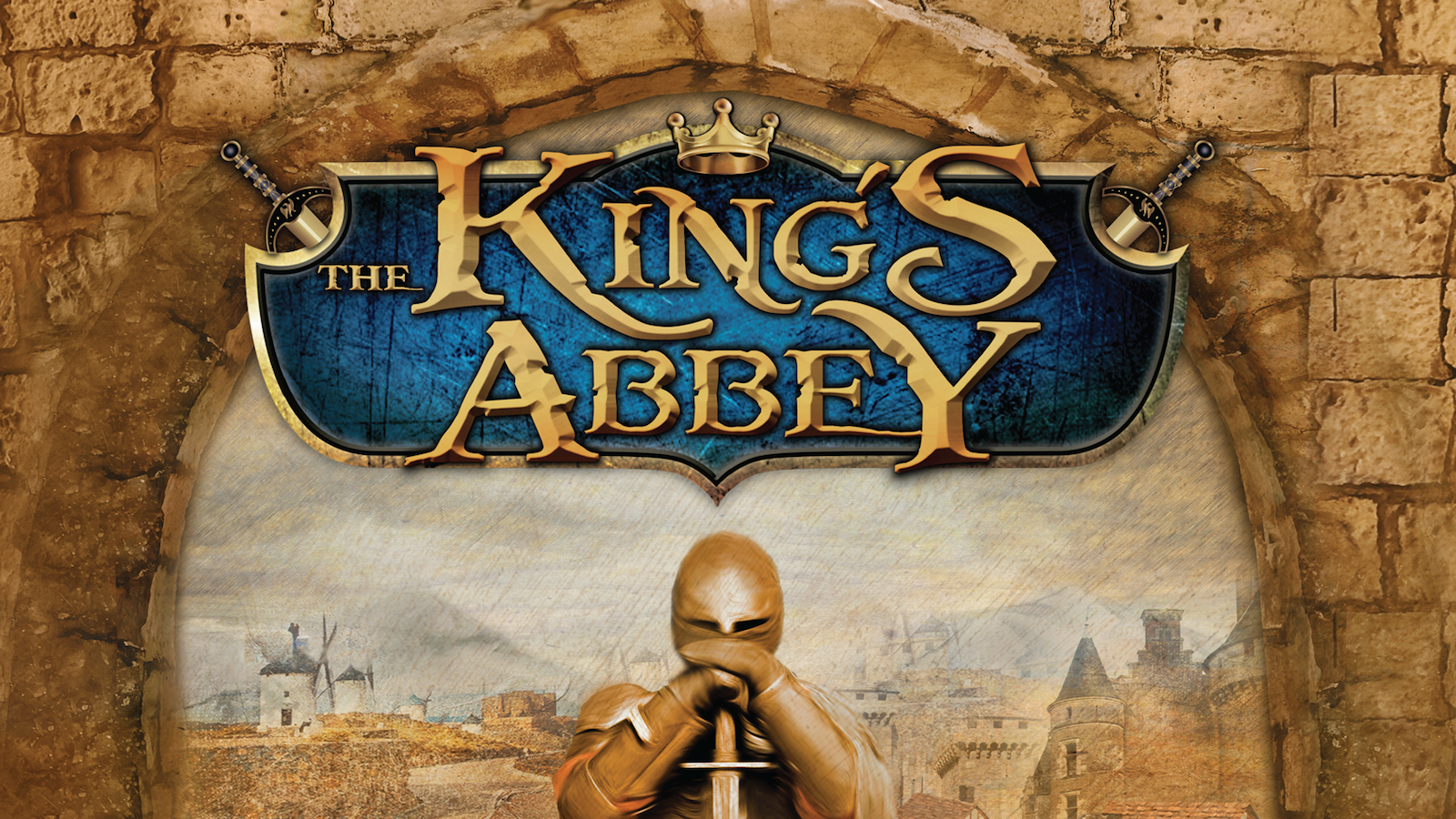 I have to laugh when someone on social media laments that this is the worst time in history to be alive. Pretty sure we are better off than the Dark Ages with their 30 year life expectancy, the black plague, and lack of reliable pizza delivery. Still, if the Dark Ages did have redeeming quality, it’s in its fantastic building achievements, especially in man’s desire to create magnificent religious architecture, such as Westminster Abbey. Abbeys were important Medieval structures, and Breaking Games’ The King’s Abbey places you in control of creating a great abbey to stand the test of time.

The King’s Abbey is a blend of resource management and worker placement for one to five players. The monks of your future abbey represent your workers, and they are represented by dice. Every turn begins by tossing nine dice, and their results will help guide your play over turn’s various phases. You’ll also have some cubes you can recruit which act as the peasants of the surrounding countryside.

Before anyone can commence work, you’ll need a draw an event card for the turn. Now this is the Dark Ages, and a majority will be negative. Sure there are positive events here and there, but most are either disaster cards or a dreaded Viking invasion. Abbeys are a treasure trove for marauding Vikings, and some of your monks may be asked to help defend the abbey.

Resources and building cards are collected from the main board.

Vikings are also represented with dice, and they are rolled and placed on the event card in descending numerical order. Each player, in turn order, must then match the next number in the sequence with one of their dice to fend off the attack. If you can’t provide a dice, you must provide a peasant instead. The difference between winning and losing the engagement is vast. Win by placing more dice than cubes, and you are rewarded with prestige, which determines the game’s victory. Lose by placing more cubes than dice, and you lose one of your buildings to your abbey. Additionally, dice used to ward off the attack are returned at the end of the round while cubes are lost for the remainder of the game. You have plenty of peasants to do what you need to do, so it may seem crass to say some are expendable. Still, there are a finite number available.

With the abbey safe, you move on to dice allocation where the game’s strength of multilayered decision making begins to blossom. Any one, two or three rolled can be used to recruit peasants to the abbey. Any four and higher can be used to advance your clerical training. You’ll need a decent number of peasants since they will eventually work the buildings and towers you’ll be constructing, but you also need to train your cleric from a simple postulant on his pathway to cardinal. Each clerical level achieved unlocks certain abilities, such as extra defense or more peasant movement. Your dice results lock you into your pathway here, but this is only one of your major decisions on how to use your monks as you’ll need them later to gather resources.

On top of dice placement for peasants and clergy, during this phase you can also choose to send some monks on a Crusade. Completed Crusades provide prestige, resources, and occasionally a relic as rewards. To complete a Crusade, you must fill a Crusade card with dice that have the same result. So if you place a die with a two value on the card, all other dice placed must be a two as well. You can ask for help from your fellow players to complete a Crusade by working out a deal to split the rewards. However, your dice are locked into the Crusade until every spot has been filled with dice. Some can be completed in a turn, but others require four or five dice to complete. Crusades are an interesting risk and reward decision within the game.

With seemingly several decisions behind you, you are finally to the heart of the game, which is the purchasing and eventual construction of buildings. You’ll first purchase the cards that represent the various buildings that will populate the land around the abbey. These could be dairy farms, blacksmiths, or breweries. Every build can provide special bonuses for you once you have peasants there to work it.

To build and populate these buildings, you’ll first need to gather resources and baptize peasants, both of which are done between the purchasing and construction of buildings. Any remaining dice you have will be used to decide which resources to collect. What you rolled matters as the die value is compared to the value of the resource you want. You will need to collect wood, grain, stone, and sand, which have a value of two, three, four, and five respectively. To gain a resource, you need to place a die valued equally or higher to the value of the resource. So you’ll need a rolled five to collect one sand. You can gain multiple resourcesin a single turn by playing dice in multiples of the resource’s value. For example, placing a six at the grain resource will garner you two grain since the three valued grain divides into the value of the die two times. Every resource also has a bonus space, which lets you lay two dice should you want to maximize the collection of that resource. Bonuses are limited, but you can allocate a die to turn initiative so you can go first in the following turn.

The game allows you to trade resources twice per game should you find yourself short. Trade is also based on the value of the goods, so you could trade two of the three valued grain to get back one of the five valued sand pieces. Unless you’ve constructed a special building, you lose any change you have from overpaying on a trade, so your math is important here.

As your abbey expands in the final rounds, your production accelerates.

Money is also a resource in the game and is used to purchase building cards and to help pay for most building construction. Money is tradeable as well, which is important as money is the easiest resource to collect in the game. You earn one coin for every peasant working in the abbey.

The planning phase of this game is phenomenal. You really have to think to determine the best way to use your die to get resources to construct buildings or feed peasants, and that decision making starts way back at the beginning of the turn when deciding how to recruit peasants or train your cleric.

You then go from one of the game strongest phases to one of its quirkiest. When peasants are recruited, they are placed in the back pews of the abbey. During the movement phase, peasants slide up pews toward the altar. Once they reach the altar, they are baptised and can be put to work in the constructed buildings. It’s another layer of decision making as you must keep peasants moving to get them to work, but the mechanic itself feels a little forced.

With peasants moved, you are ready to construct buildings. You’ll pay the resources needed for construction and place the building on your abbey board. You can construct buildings you bought earlier, or you may construct towers, which every player has from the start. Towers provide defense, which you’ll need to combat the approaching darkness of the times. You can also build the walls that surround your abbey, or the altar itself. Building is the focal point of the game as you’ll earn most of your prestige through construction. After construction, you can place baptised peasants in the buildings to earn the building’s bonus. Farm and garden buildings then provide food which will help you feed your peasants, otherwise you’ll need to keep a stock of grain on hand to keep the populace fed.

The turn wraps up with the approaching darkness and income collection. The darkness is an abstraction of all the perils of Dark Age life, such as raiders, famine, and disease. The darkness begins at a level three and goes up once per round. Your defense needs to be at least as high as the current darkness level, elsewise you will lose both prestige and peasants! Defense can be bolstered by building towers and manning them with archers, completing walls, or through certain buildings.

The game lasts for seven rounds, and the player with the highest prestige at that point wins the game. The game is fun, but it is odd that a game about abbey building doesn’t actually require you to complete your abbey. There’s also no end of game bonus for completing an abbey.

The King’s Abbey certainly has a lot going on throughout play. It does so much that it does take some time to set up and play, but never did the game feel like a slog. This is probably because the game keeps you focused thinking about not just what you need to do now, but how it sets you up for what you need to do later. It also does a solid job of blending different mechanics smoothly. You shouldn’t let the game’s many facets intimidate you; on its own, each phase of the game is easy to understand. In fact, the game never feels like it takes chances but plays it safe throughout resulting in an enjoyable, but not extremely challenging, experience.

The King’s Abbey has you thinking about Vikings, farming, construction, peasants, and even math, all while trying to build a magnificent abbey. It certainly presents you with some great challenges in how to best use your resources to gain prestige. The King’s Abbey does many things well, which is enough to provide you a fairly enjoyable gaming night.