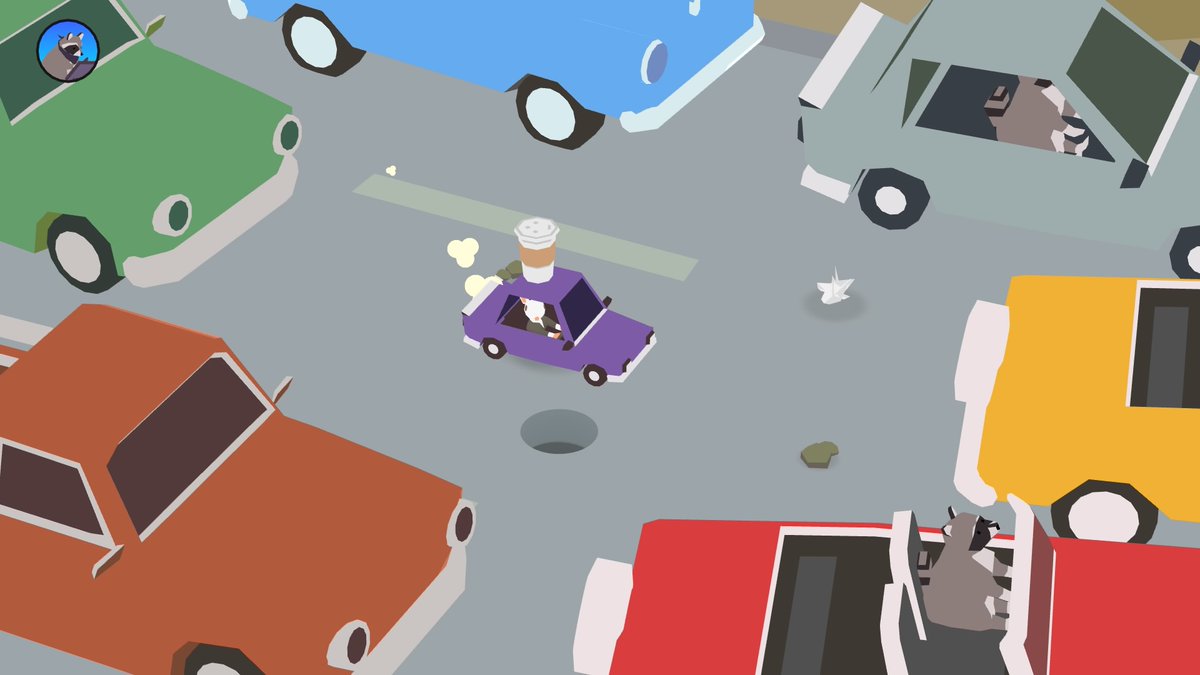 There is nothing I value more in a game than creativity and originality and few games better exemplify these qualities than Donut County, the recently released sinkhole simulator from Ben Esposito and Annapurna Interactive. If playing as a self-centered raccoon named BK opening up sinkholes to accrue enough points to buy your own quadcopter isn’t the most unique conceit for a game that you’ve heard of in a long time, I’m not sure what to say. Perhaps I’ll say this; Donut County takes its wild premise and executes on it with such precision and charm that this is easily one of the best games of 2018.

The game takes place nine-hundred and ninety feet below ground, with the residents of Donut County gathered around a campfire, chewing out BK for sinking the town into destitution to earn an RC drone. Each town resident has a zany story of what they were up to when BK enveloped their property and sent them underground, and you’ll get to work backwards in time, helping BK accomplish his goal of, let’s say, relocating the citizens of Donut County.

To do this, you’ll control his sinkhole, which starts out each scenario donut-sized. However, as you suck in objects, the hole will grow in circumference, to the point where you’ll be taking entire apartment buildings down into the depths below. The gameplay is incredibly simple in this regard, but fiddling with physics to systematically consume a crocodile’s house and home is equal parts absurd and engaging. Figuring out how to submerge everything in a level was a really laid-back, yet tactile experience. Donut County doesn’t ask you to get anywhere near the edge of your seat, but this is a relaxing experience just as engaging as the most demanding twitch platformer.

While levels never got difficult by any means, they added new mechanics at a great pace, which kept the game feeling very fresh. Whether you were starting a fire in the sinkhole to use as a means to pop popcorn, or filling the hole with water for a bird to drink, there was always a creative concept to explore. You even get a catapult upgrade for your hole at one point, which adds another facet for creative puzzles, such as swallowing a frog, and then launching it back out of the hole to pull down flies and honeycombs with its tongue. The game just gets more and more outrageous in this respect, but while the ideas get more and more zany, nothing feels obtuse. It is really a testament to Ben Esposito’s level design that something as ridiculous as using a water balloon’s explosion to power a raccoon-themed water park attraction, all while playing as hole, mind you, never felt out of place or difficult to understand.

Donut County’s gameplay is just steeped in whimsy, and that sentiment extends to every other aspect of this game. The music is some of the best I’ve heard all year, and the game’s aesthetic is simultaneously minimalistic, and brimming with personality due in large part to the game’s excellent character and location designs. Simply being in the world of Donut County is a pleasure. I’d be remiss not to talk about the game’s sense of humor also. The dialog and trash encyclopedia entries are cuttingly witty, and laugh out loud funny. You know your writing is good when I take in every word, laughing the whole time, instead of mashing the X button to reach the next gameplay beat. I think that the game leans into internet speak a bit too often, if I had to critique the writing anywhere, but it hardly detracts from the script as a whole. What’s even more impressive, though, is the way that Donut County evokes physical humor through gameplay. One particular gag involving rabbits was just brilliant– but I don’t want to spoil that here. That just speaks to the meticulous quality of Donut County. Everything is purposeful and there isn’t an ounce of fat on the game’s body. Personally, I do think that the game’s sole combat instance, while clever, did feel out of place, but that one instance is a total outlier. Other than that single moment, I didn’t feel Donut County’s design faltered at all.

The most controversial aspect of Donut County, which might prove to be a deal breaker for some, is its scant runtime. It’s somewhere between two and three hours, depending on how thorough you are. I finished Donut County wishing for more, but in the same way I wish for Ridley Scott’s Blade Runner to be longer. I wish there was more of the thing I love, but at the same time, the package is so methodical, that to ask for more would be to ask for padding. Donut County really is a narrative experience, and it succeeds on that front, hitting all the right beats at all the right times. Shoehorning more into an experience this exact would just feel wrong.

Donut County is simply so inventive and polished. I was laughing out loud at the game’s hysterical writing and engrossing myself in its tactile gameplay. I implore everyone to give Donut County a look, as I promise you haven’t played anything like it before. While I have slight nitpicks with the title, Donut County caught me totally by surprise and is easily one of my favorite games of the year.

Laser-focused and brimming with charm, Donut County is one of the year’s best experiences. While brief, its laugh-out-loud sense of humor and laid-back, tactile gameplay combine precisely to create a game like no other. You’ll come for its physics based puzzle-solving, but you’ll stay for its quirky cast of characters and world. This is not a game to be missed.

Abram is an aspiring games journalist with a soft-spot for titles published by a particular company that starts with N, and ends with -intendo. When he's not playing, or writing about, video games, Abram is most likely ranting to no one in particular about various films he's seen, or grabbing the sketchpad to do a bit of drawing.
Related Articles: Donut County, Indies
Share
Tweet
Share
Submit