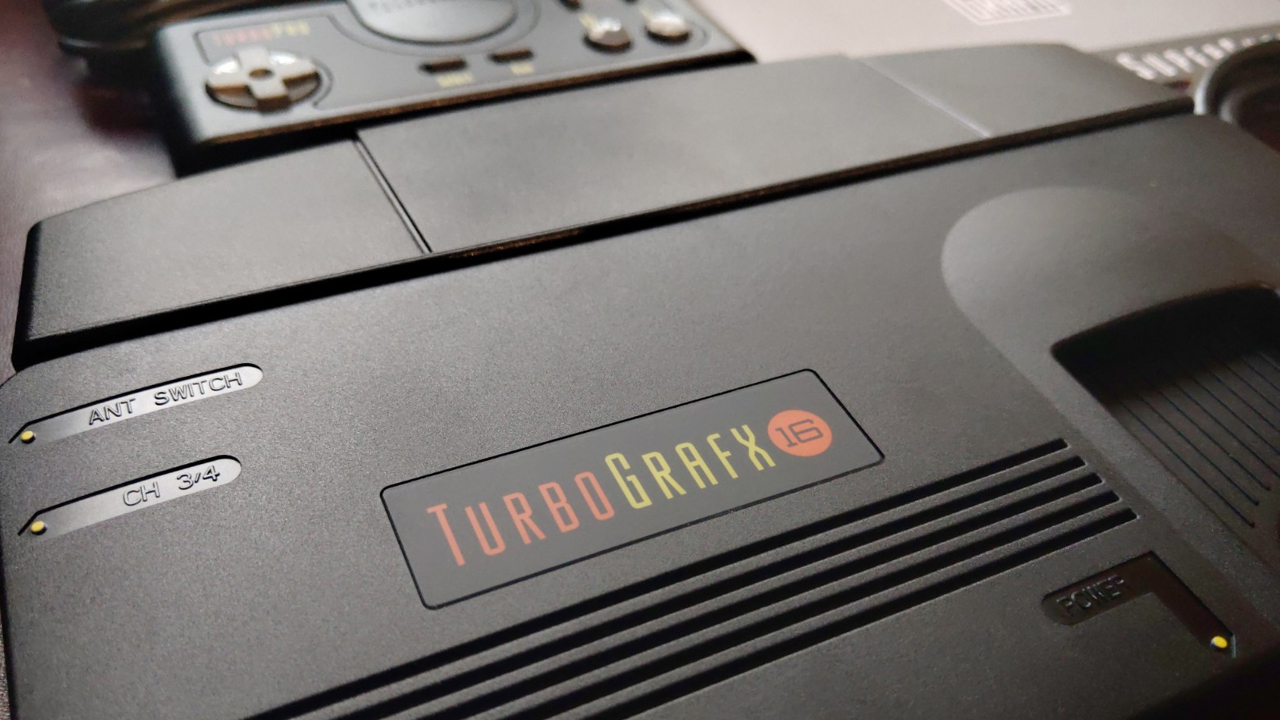 I grew up dirt poor. I didn’t own a NES, I couldn’t afford the SNES, no Genesis or Sega CD. The list goes on, but all of them had one thing in common — my friends had them. TurboGrafx-16 on the other hand remained elusive. If my friends and I wanted to play Splatterhouse, Cadash, or Bonk’s Revenge we had to grab our quarters and hit the arcade. As an adult I thought about buying one on eBay, but at over $200 for the console, and $60-80 a pop for the games, that was an expensive proposition. I would have to drop in on my wealthy adult friends to play the console as arcades have become far more rare. You can imagine how happy I was to hear that Konami would be jumping on the mini bandwagon with a TurboGrafx-16 — you can bet I was not gonna miss the boat this time. 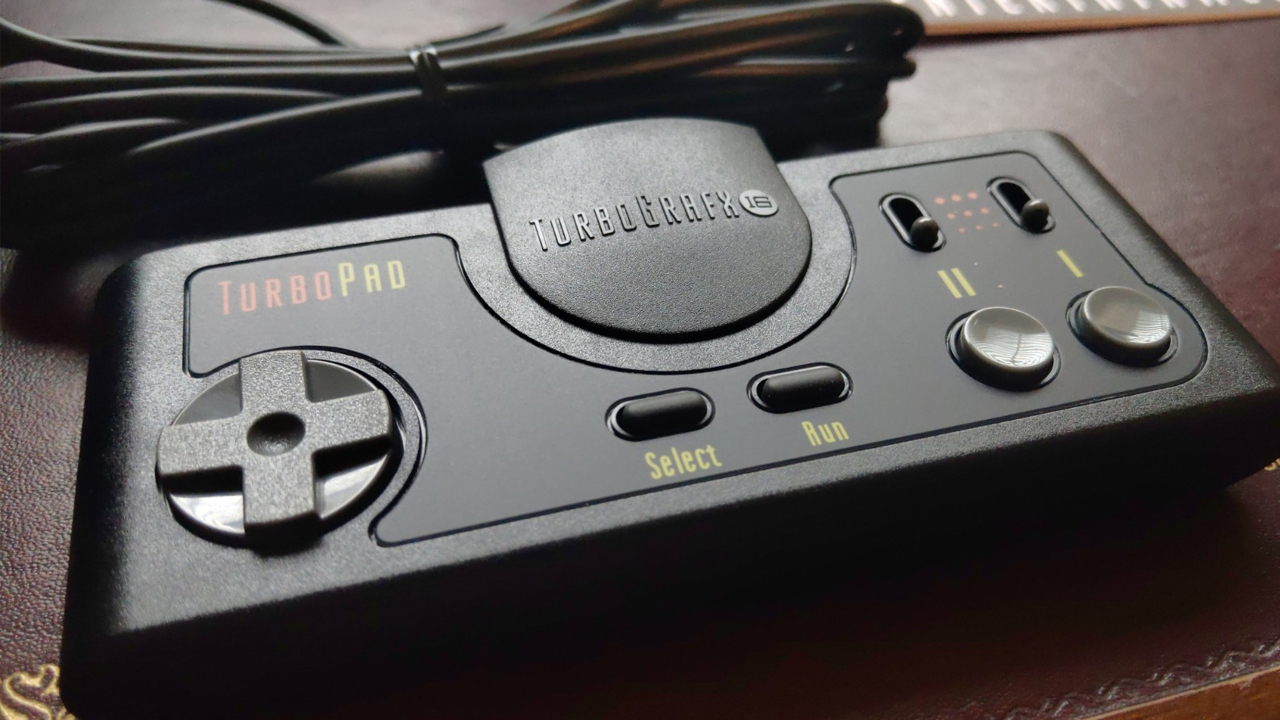 Unboxing the system, it’s clear that Konami was looking to capture nostalgia. The system has callouts for the channel 3/4 and ANT port that exist on the full-sized model (though there are no switches here), and a large cutout for the Turbochip Game Card. It looks exactly like the original, only smaller. Removing the expansion port cover (just like the full-sized model) you’ll find the HDMI out port, as well as some cable routing channels leading to the USB-mini power port. Gone is the 5-pin cannon plug that was used for plugging in controllers, instead replaced with USB. The system has two ports for multiplayer gaming, though you’ll have to hunt down a second controller. Unfortunately, the system only comes with one, but at least the cord is a usable length at nearly 10 feet.

The power switch on the original TurboGrafx-16 had a small mechanical tab (a “Turbochip Game Card Lock”) that slid over to ensure that the game card wasn’t removed during play. While the TurboGrafx-16 Mini’s card slot is just for show, Konami kept the tiny sliding lock mechanism. Even the expansion port is meant to be removed like the original by pulling on the tabbed underside. It’s these kinds of details that put a smile on my face. 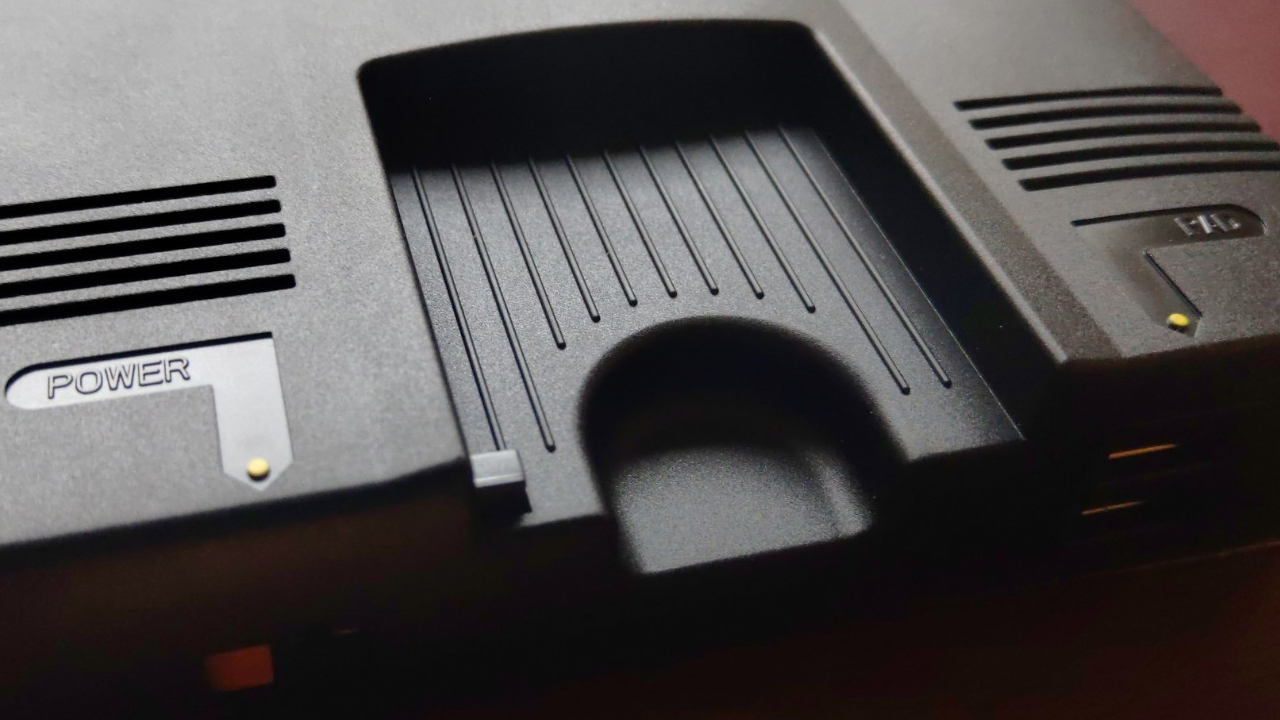 It’s silly, but this notch is a great detail.

In all, there are 57 games loaded on the TurboGrafx-16 Mini, though you’ll need quite a bit of Japanese under your belt to be able to play games like Hideo Kojima’s cyberpunk thriller, Snatcher, or Dungeon Explorer. Let’s look at the full list:

There are some wildly divergent “greatest hits” lists out there, and most of them are present and accounted for on the TurboGrafx-16 Mini. That said, there are a few noticeable absences including games like Turrican, Devil’s Crush, Double Dragons, Strider, and Keith Courage. Neutopia, Ninja Spirit, Ys Book 1 and 2, R-Type, and Castlevania: Rondo of Blood (though it’s in German for some reason?) make up for it nicely, though. Here’s a not-so-quick look at some of the games and options, as well as a little bit of gameplay, for the system:

Just like other emulated mini-consoles, what you see here is what you got with the original, warts and all. That means that, while it’s very possible to run games like Ninja Spirit without framerate drops with modern hardware, you’ll be getting the framerate hitched original. Watch in the video above when I take out the first boss, or when I kill off masses of enemies in the SCHMUPS. Nostalgia stings sometimes. That said, this walk down a road I couldn’t afford as a kid is exactly what I needed.

A perfect recreation of a storied classic, the TurboGrafx-16 Mini delivers a whole host of amazing titles, including some you’ll never find anywhere else. While the two player games go unplayed without a second controller, this mini console is an amazing trip down memory lane...if you can get your hands on one, I highly recommend it.

Ron Burke is the Editor in Chief for Gaming Trend. Currently living in Fort Worth, Texas, Ron is an old-school gamer who enjoys CRPGs, action/adventure, platformers, music games, and has recently gotten into tabletop gaming. Ron is also a fourth degree black belt, with a Master's rank in Matsumura Seito Shōrin-ryū, Moo Duk Kwan Tang Soo Do, Universal Tang Soo Do Alliance, and International Tang Soo Do Federation. He also holds ranks in several other styles in his search to be a well-rounded fighter. Ron has been married to Gaming Trend Editor, Laura Burke, for 21 years. They have three dogs - Pazuzu (Irish Terrier), Atë, and Calliope (both Australian Kelpie/Pit Bull mixes).
Related Articles: Hardware, TurboGrafx-16 mini
Share
Tweet
Share
Submit