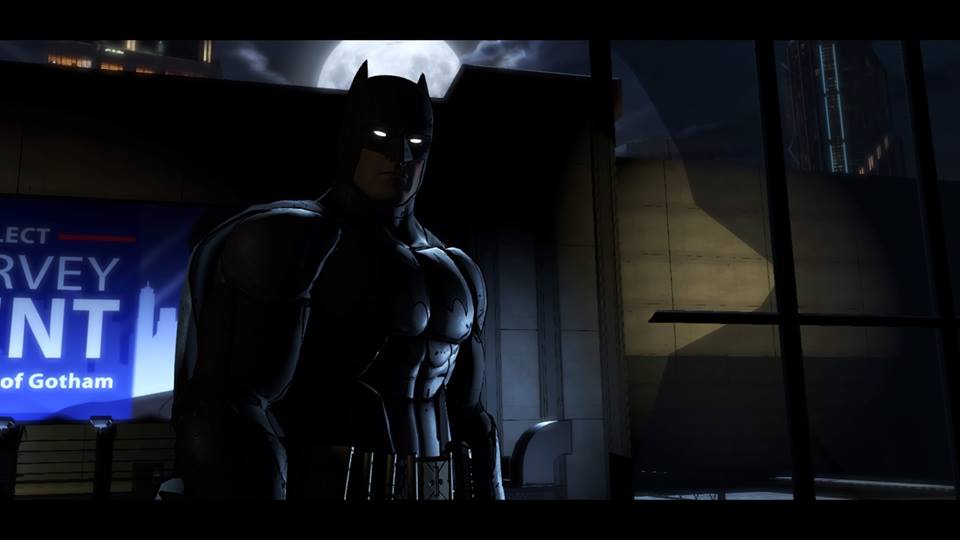 In the opening moments of Batman – The Telltale series I felt a moment of disappointment when I, as the game’s titular caped crusader, threatened to drop Catwoman off the side of a building if she refused to give up information about her latest heist at Gotham City Hall. Rather than taking my threats seriously, Catwoman insisted that I wouldn’t drop her, since Batman is “not that kind of guy.” Rather than being given the chance to make good on my words, I was immediately required to pull the thief up to safety, making me feel that, despite these choices in front of me, I was going to be stuck filling in the lines of an already established character as I had in series like The Walking Dead: Michonne and The Wolf Among Us. Thankfully, by the time Batman’s pilot episode, “Realm of Shadows,” was over, I felt less restricted than I expected, like Batman was my own character to mold, even if only in minute ways.

Over the course of its run time, “Realm of Shadows” doesn’t outright subvert the idea that working within the confines of established character is restricting player choice; but it did make me feel like I was able to play a version of Batman who was more in line with the “take no prisoners” attitude I’ve always wished the character had, and that was more than enough to get me excited to take a walk in the shoes of Bruce Wayne.

Episode one begins as Bruce is hosting a fundraiser at Wayne Manor endorsing Harvey Dent as Gotham’s next mayor. This segment, where I needed to be on my best behavior to impress Gotham’s public, immediately put a spotlight on what makes Telltale’s Batman so much different than other portrayals. Rather than spending much of “Realm of Shadows” donning the mask and cape of Batman, I was surprised to find that the majority of the episode had me nurturing relationships with Gotham’s press, politicians, and even mob bosses as Bruce Wayne rather than dealing with trite Batman conflicts, like his views on killing criminals.

Telltale’s take on Batman doesn’t give equal weight to both Batman’s crime fighting and Bruce Wayne’s public persona, though. It makes a concentrated effort to focus on the latter. These moments are fueled by more morally grey dilemmas than ones faced while sporting armor and a cape, and I felt the stakes were higher when I had to decide whether I should give incriminating evidence to the press or to the police than when I had a gun pointed at my head as Batman. The drama of these scenes is elevated by Telltale’s excellent writing and voice casts, even if the likes of Troy Baker and Laura Bailey as Batman and Catwoman respectively feel tiresome after Telltale’s use of their talents in Tales From the Borderlands. While the consequences of these decisions are yet to be seen, feeling the freedom to paint my own version of Bruce Wayne instills some confidence in me that Telltale may be more lenient in how much it will let me shape a character everyone already knows, rather than forcing me to stay within the lines of Batman’s decades of history.

This malleable nature felt apparent in the moments where I fought crime as Batman and had the option to use more extreme methods of intimidation, even if it was at the expense of my mutual respect from Gotham’s Police Department. As someone who has always found Batman’s non-lethal ideals frustrating, having the option to go a little bit further hinted that I may be able to bring out a different side of this character, one that differentiates itself from so many other portrayals of Bruce Wayne.

Spending most of “Realm of Shadows” as Bruce Wayne made the moments where I actually played as the Dark Knight himself all the more memorable, as the action sequences are among some of Telltale’s best and most elaborately choreographed. These scenes also felt more engaging  thanks to some slightly more complex QTEs akin to later fights in Tales from the Borderlands.

Along with better action sequences, Batman manages to differentiate itself from Telltale’s catalog by taking advantage of Batman’s gadgets, including segments where I investigated a crime scene, linking together different objects and evidence around the aftermath of a shootout to piece together what happened. A similar event happened later in the episode where I scouted out a room at a social gathering and made my plan of attack by examining enemy positions and figuring out what was the best way to go about infiltrating the building.

Scenes like these and the great deal of attention given to the segments played as Bruce Wayne make Batman feel all encompassing, rather than focused on just one side of its hero’s life. In one episode Telltale has managed to pull of something most Batman games don’t: it made me feel like Bruce Wayne the man rather than just the Batman. Whether I will continue to get to shape who that man will become is still unanswered, but for now, “Realm of Shadows” has me interested in what it can do within the city of Gotham. Just as a pilot episode should.

Telltale's take on Batman is fresh, and shows a side of Bruce Wayne most games shy away from, and that's enough to make it interesting as we head into the rest of the season.