I’ve noticed an intriguing trend in fighting game design recently: accessibility. In my opinion, fighting games have never been about who can perform complex inputs like pretzel motions or half-circles the fastest; they’re about reading what your opponent is about to do next and countering that. The genre was already stripped bare by last generation’s DiveKick, a fighter with two moves that use a single button, but developers, especially Arc System Works, have been trying to lower the skill floor while retaining a diverse set of fun and flashy moves for each character. In Granblue Fantasy Versus, the most complicated input you’ll be asked to do is a quarter-circle, which I can only do about half of the time, but still, it’s better than not at all.

Granblue Fantasy is a (currently) japanese only mobile/browser RPG with a focus on receiving characters and equipment through random drops, otherwise known as a gacha game. Since its debut in 2014, the game has skyrocketed in popularity and even received a two season anime adaptation. Granblue Fantasy Versus is the franchise’s first console title, with a full-on action RPG partially co-developed by Platinum games coming eventually. For now though, Versus is the first taste of the Granblue world many westerners will have. And it is a pretty interesting world, with a vast array of colorful characters and places. 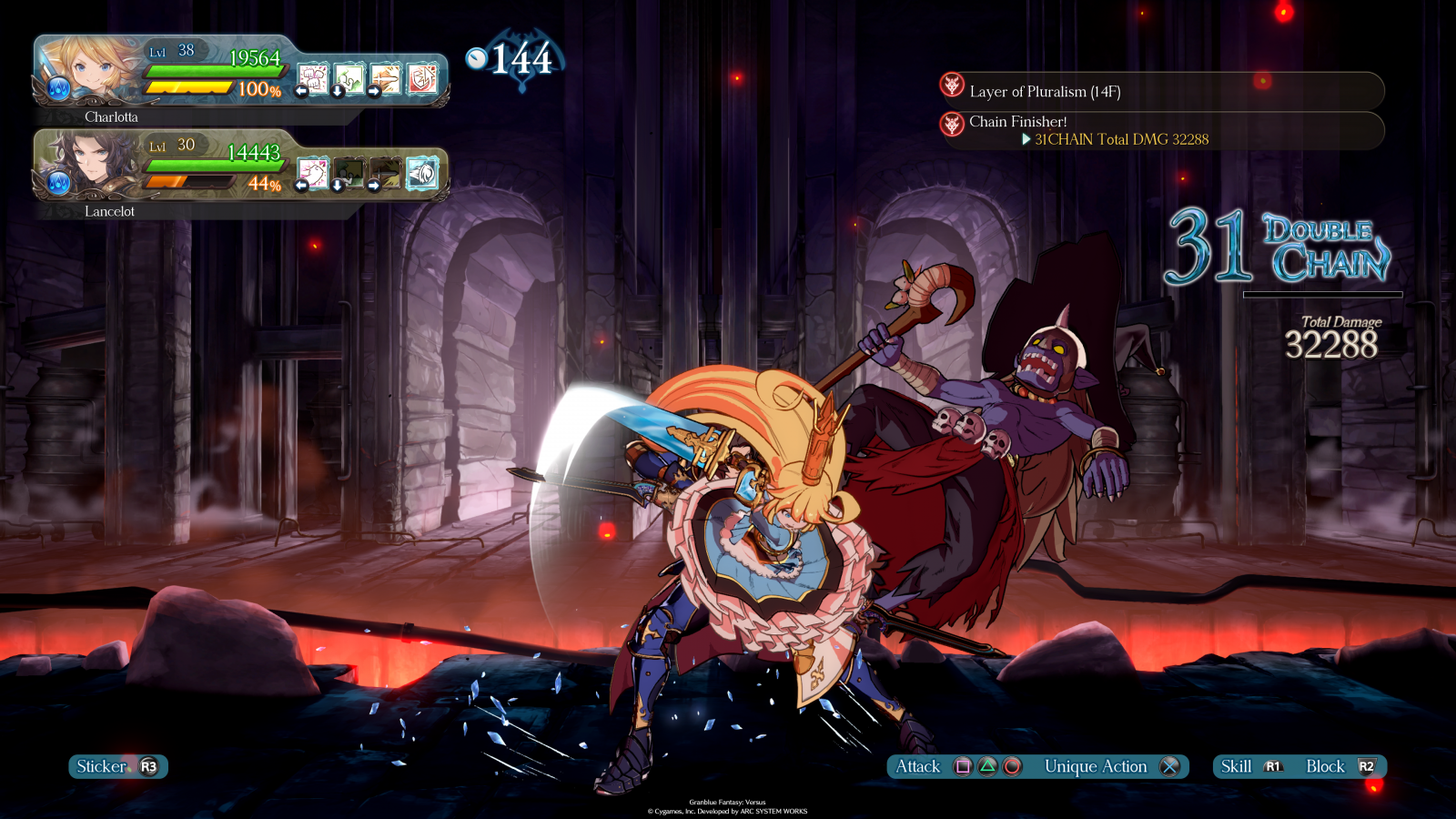 The main story of Versus, called RPG Mode, follows Gran, a young adventurer traveling the skies with his friends Lyria, Katalina, and Rackam. On their way to pick up Katalina after a short sojourn, the crew discovers that the evil Erse Empire has re-emerged. After defending Lyria from several imperial soldiers, the heroes meet up with Katalina only to find that her memory has been erased and she has rejoined the empire. Gran defeats Katalina, her memory returns, and the crew set off to find whatever is causing these strange events in the skydom. Did I mention that Granblue takes place in a world of floating islands like contender-for-best-RPG-ever Skies of Arcadia? Because it does. I’ve always been a sucker for that kind of setting, and Versus does well with it. Chapters in RPG Mode are separated between different islands, and one of the most gorgeous arenas is an island that’s quickly falling towards the abyss below. On the journey, Gran will recruit a colorful roster of characters to their side, like the diminutive and adorable holy knight Charlotta or the surprisingly respectful portrayal of a non-transitioning transgender woman in the professional fighter Ladiva. (Side note: she’s the best portrayal of a trans character I’ve ever seen in a AAA video game, no one misgenders her and her trans status is never brought up or questioned, which is a godsend in a world where trans rights are being constantly attacked.) While the game might not do anything new or novel with the setting, it’s still an intricately designed and lived in world that’s also very pretty.

The whole game, in fact, is absolutely stunning. Stages are colorful and busy, while the characters possess a wonderful cell-shading and animation technique that make them pop. Screenshots don’t really do this game justice, so I would encourage you to give the video above a watch. I only have two nitpicks about the visuals: the PS4’s home menu icon for the game is ugly, with a reddish-orange color scheme instead of the game’s more blue color pallet, and there’s no model viewer so I can ogle these gorgeous character models. 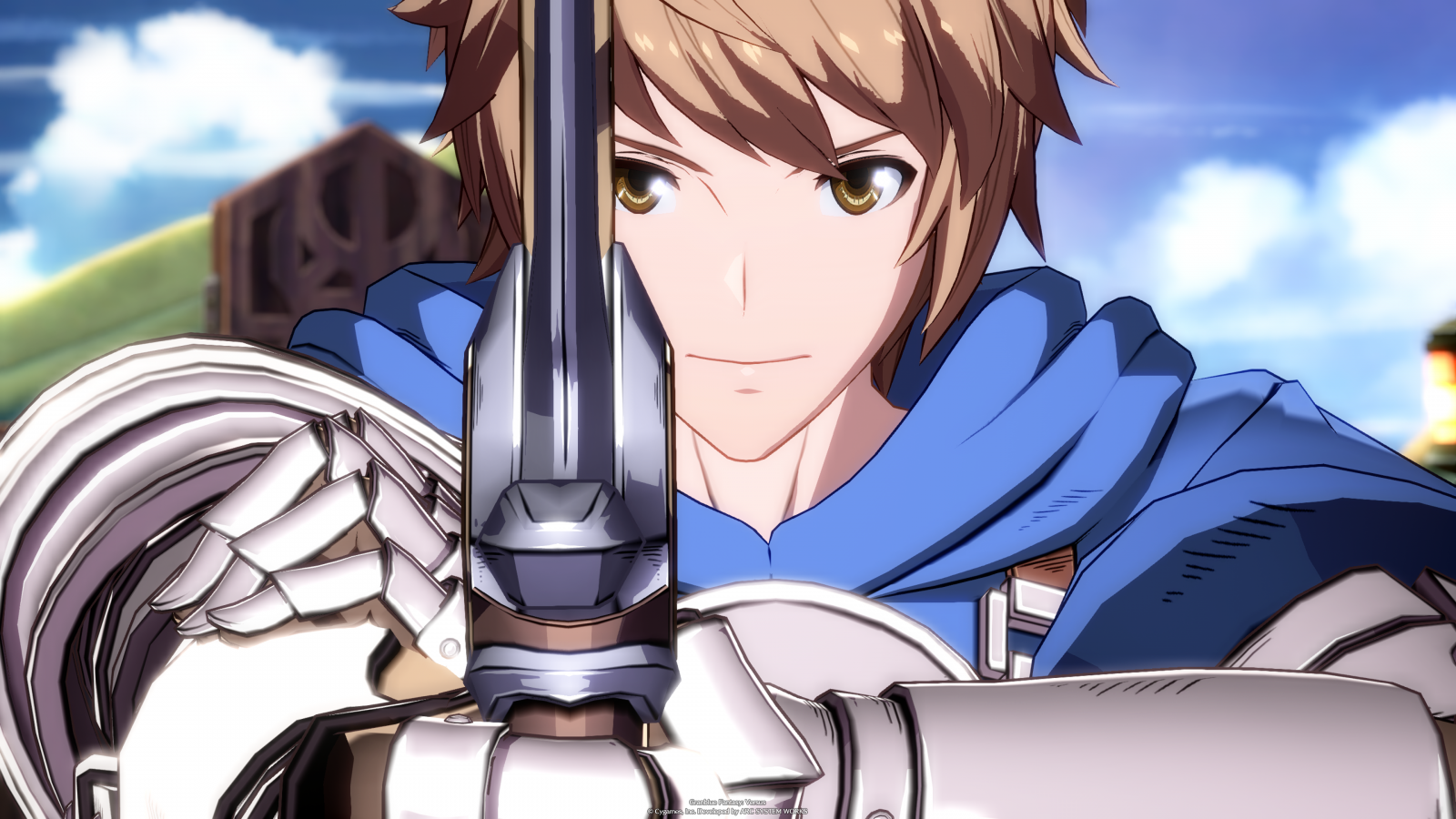 Versus has two distinct gameplay types, the standard 1 vs. 1 of most fighting games and RPG Mode’s beat-em-up style. Controls are the same in either mode, but in RPG mode you fight hordes of enemies and it lets you face left or right instead of always facing your opponent. While RPG Mode is fun for its around 10 hour duration, it’s repetitive and easy nature along with the dumb as rocks AI partner makes the adventure less replayable that it wants to be. This mode is how you unlock new weapons and colors for the roster, and while you’ll easily be able to afford all character colors with the money the main story gives you the same can’t be said for the weapons. Instead of just being able to buy them with in game currency, you have to either receive them through random drops (a nod to the main mobile title) or forge them using materials found by defeating enemies in certain missions, the most rare of which are locked behind the very end of hard mode or the unlockable Tower of Babel dungeon crawl. In either difficulty, you can further trivialize the admittedly bland story by replacing your AI partner with a friend or stranger either locally or online.

Outside of RPG Mode, you’ll find your standard fare for fighting games: versus, arcade, training, and online modes. If you’re familiar with the genre, you know exactly what you’re getting into, but for the uninitiated I’ll explain. In versus mode, you’ll battle against either a friend sitting next to you or the AI. Arcade is the mode that you’d typically see in arcades back when those were common, you pick a character and face a gauntlet of foes, which you can choose between stages from a list of three along with their difficulty, culminating in a battle against the final boss from story mode. While I did enjoy the somewhat generic plot of RPG Mode, it would have been nice to have something more than just an ending image in terms of story. For example, the characters can be shallow and tropey, but I really enjoyed their dialogue and interactions and Arcade Mode would have been the perfect place to give each of the fighters more screen time. Characters also have a very small amount of intro and outro animations before and after battles, so seeing the same ones over and over again can be grating. Next, Training Mode is exactly what it says on the tin, it’s a mode where you practice your moves. Finally, Online contains three styles of play: lobbies where you can walk around, chat with other players, and have casual 1 v. 1 bouts; rooms, which are similar to lobbies but without the walking around; and Ranked matches, which pit you against an opponent of similar skill in a battle for glory. While I have my complaints about Arcade Mode, all of this is about what you would expect for a modern fighter, no more, no less. 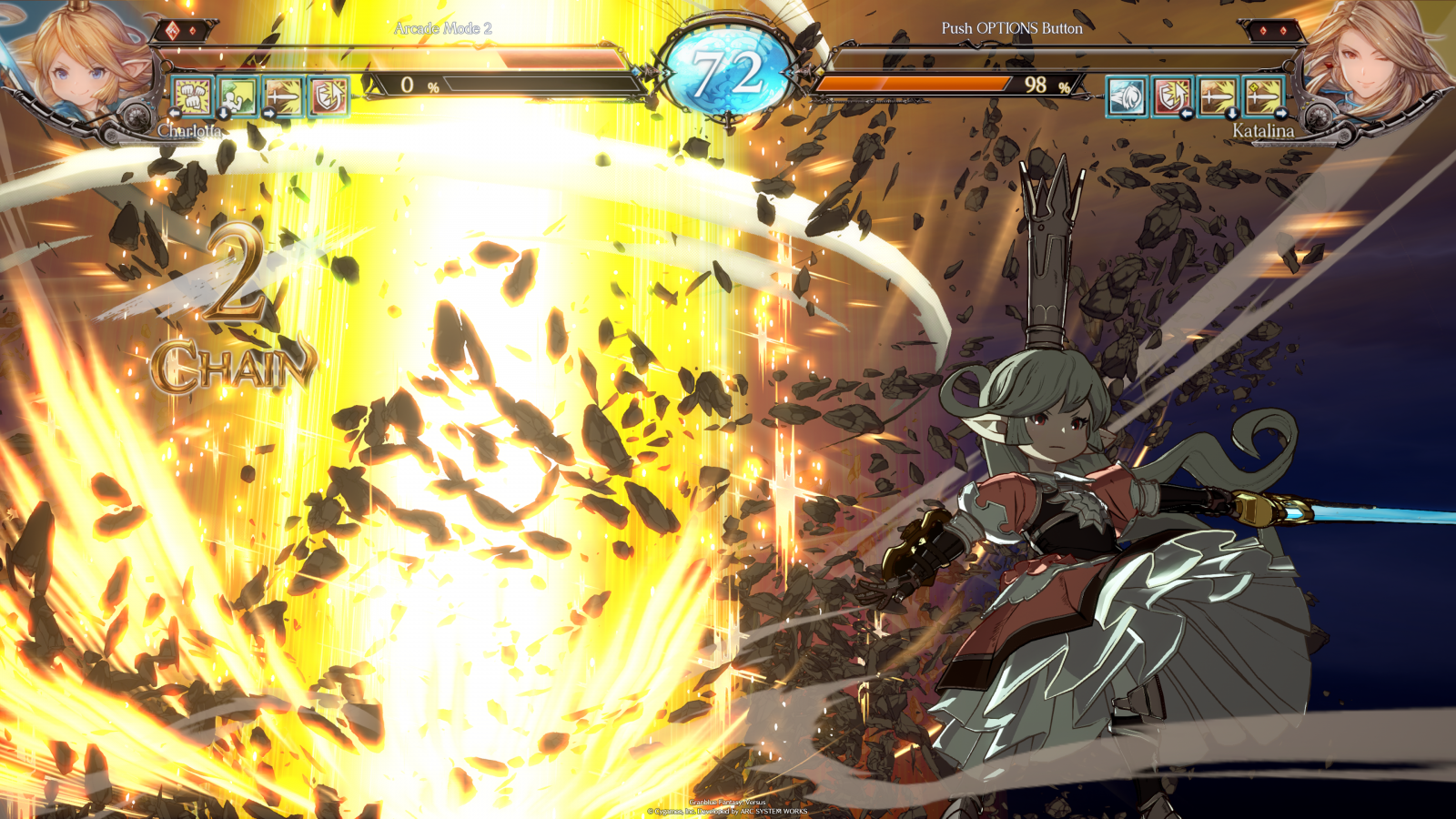 In all those modes, you’ll experience the frenetic, yet easy to grasp combat that Granblue has to offer. Attacks are mapped to five buttons on the controller, Square is your light attack, Triangle your heavy, and Circle your even heavier attack. Hitting an opponent with any of those three attacks and continuing to mash will initiate your auto combo, usually a three hit string of strikes. These combos are your bread and butter, like most fighting games, but where things start to get interesting is you can cancel out of the auto combo into either a special move or your character specific move. You’ll use the final two buttons for each of those things, X will execute a character specific move, with variants when mid-air or crouching, while pressing R1 with the stick in either a neutral position or a direction will execute one of four special moves. Instead of using a special meter, they each have a cooldown time during which they’ll be unusable. Additionally, each special can be modified slightly by pressing Triangle or Circle in conjunction with R1, though this will increase their cooldown period. At first glance combat may seem shallow, but once you get to grips with it it’s anything but.

While I overall enjoyed my time with the game, it doesn’t feel like the game lives entirely up to its potential. The story, while serviceable, could have been much more interesting with the setting and characters.The voice acting is good for most fighters, but Anthony Sitoy as Percival is a glaring controversy to that statement; he sounds stilted and like all of his lines are the first time he’s reading them. Finally, even considering the game has been out for a month in Japan, the existence of day one DLC cheapens the quality of the package, especially since the character on offer appears to be, at least to me, overpowered with just about everyone using her online.

As the west’s first peek into the Granblue universe’s gaming side, Granblue Fantasy Versus is a fighter that can stand alongside its peers in terms of depth, but in addition offers a simplistic control scheme that even those less familiar to the genre can get to grips with quickly and easily. RPG mode is a unique way to to learn the basics of fighting, even if this and other modes could have been a bit more fleshed out.

David is the kind of person to wear his heart on his sleeve. He can find positives in anything, like this is a person who loved Star Fox Zero to death. You’ll see him playing all kinds of games: AAAs, Indies, game jam games, games of all genres, and writing about them! Here. On this website. When not writing or playing games, you can find David making music, games, or enjoying a good book. David’s favorite games include NieR: Automata, Mother 3, and Gravity Rush.
Related Articles: Granblue Fantasy Versus
Share
Tweet
Share
Submit