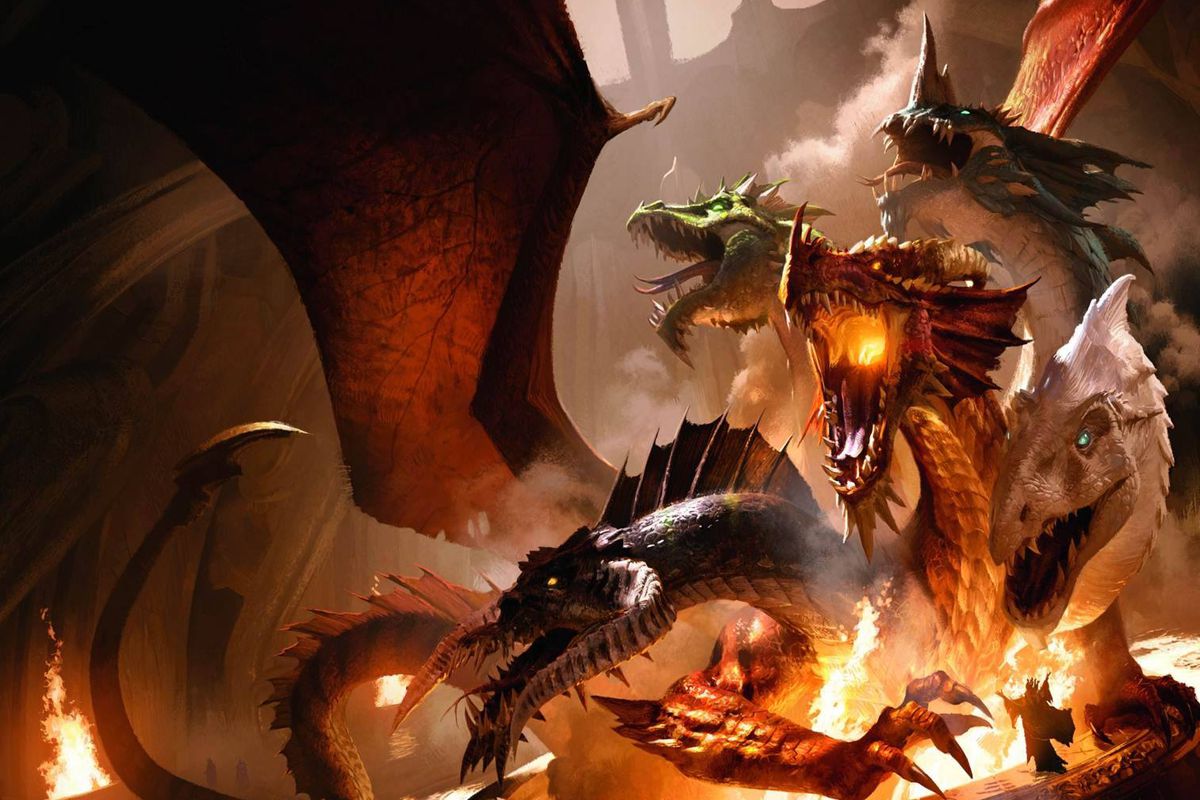 It’s said that a poor workman blames his tools, but when you’re given Tyranny of Dragons to work with, there is only so much anyone can expect from you. Maybe I’m going too far, but the general consensus is on the mark in thinking that Hoard of the Dragon Queen and Rise of Tiamat, the inaugural stories for Dungeons and Dragons 5th Edition, were a pretty rough start. In adapting these tabletop adventures to its virtual service, the Roll20 developers did their level best to bring all the shine they could out of those adventures, which together made up the long story arc of Tyranny of Dragons. The product resulting has Roll20’s dedication and polish lain over adventures that might not excite you.

One good decision Roll20 made was to release each adventure separately, for those who choose to purchase them that way. Individually they cost $29.95, and together they are $49.95. Given the pricing, and the fact that they form a single story, taking your characters from level 1 to 15, it might seem a natural choice not to split them up. However, you may choose to play one for the lower price before deciding on the other, or opting to skip straight to Rise of Tiamat, the higher quality adventure.

For ease of use, you can access stats via a sidebar or through an array of tokens, and reorder each as you see fit.

Tyranny of Dragons was never terrible. It merely lacked the flair and originality of Wizards’ later releases. Mostly it suffered from the circumstances of its own release. As they were being prepared in tandem with Fifth Edition, some of the monsters were improperly balanced, leading to a historically lethal experience at earlier levels. Some of the rules were also unclear or improperly understood at this level. Roll20 has fixed these issues when they could, but statistics are still intact. The endemic problems of editing have been completely eliminated, thankfully. Because Roll20’s modules are searchable and broken into distinct portions, it is easier than ever to access information.

The main issues with the Tyranny adventures were narrative, but the problems were more pronounced in Hoard of the Dragon Queen. The story is notoriously on rails, and weighed down by some frustrating cliches. The caravan guard portion is particularly egregious, forcing the adventure to grind to a halt as you plod your way along a number of simple encounters of varying creativity. The overall plot was also less than inspiring: a group of dragon cultists are stealing treasure for their dragon god, and you are supposed to stop them. By the end, you and the realms are aware of the real threat, which launches you into the Rise of Tiamat.

Pictured above: a player trying to control the adventure in in Hoard of the Dragon Queen. Alternately, the exact moment that the delivery guy realizes he won’t be getting that tip

Rise of Tiamat was much more freeform, and tracks the Mass Effect 2 model in many ways: throughout the adventure you are tasked with performing various loyalty missions for Faerun’s factions to gain their favor in the coming conflict. Many of these are creative and inspiring, but ultimately somewhat pointless. Some of the early adventures still suffer from railroading; to make the ending possible they have to prevent the players from achieving certain goals, which stifles the agency of creative players.

The ultimate conclusion is, again similar to Mass Effect’s ending, not that impactful. You will be swaying metallic dragons and famous groups like the Harpers, but the actual effect of their favor is somewhat binary. It amounts to a few boxes checked, and doesn’t have much weight to the actual conclusion. You are also arbitrarily halted before you get to that point. The basic plot of Rise of Tiamat is that you need to level up to be ready for the final encounter. The concept does work in the context of the narrative, but at times you are too able to see the strings moving the limbs of the adventure.

This adventure also functions as an introduction to the Forgotten Realms and its factions, which are only really compelling to those already immersed in the lore of the setting. The benefit of using Forgotten Realms as a base setting is its familiarity to fantasy tropes and newcomers to D&D: you have mountain dwarves and dragons and cities of dark undercreatures. Oh, there is far more at work in the Realms, but the most interesting and unique portions aren’t present here. Things don’t get really interesting until we head south in Tomb of Annihilation (and I’m still waiting on an Al Qadim release).

Taken together, the two help to supplement one another a lot. Hoard of the Dragon Queen is an introduction to the mechanics and theme, and helps get new players up and running, while Rise of Tiamat gives them more freedom and power to play with, rounding out with a massive final confrontation. Nothing is completely new or innovative, but they are effective at their basic goals.

That said, translation to Roll20 has been very good for Tyranny of Dragons. It’s made the adventures easier to prepare for, run and use, if having some small rough edges of their own. The Roll20 Edition contains enormous quality of life changes that make the purchase worth considering.

You can pop out each piece of art to show your players during the adventure, besides those intended as handouts. When you do so, the notes will be hidden from them

The adventures contain the usual features of any Roll20 release: statistics and tokens for monsters, NPC character sheets, integrated dice rolls and initiative, dynamic lighting to make areas feel more real, player handouts to make everything more visual, the ability to customize and reorder content, and more. For a more complete discussion of all of Roll20’s features, I encourage you to check out my previous Tomb of Annihilation Review. Suffice it to say, the service makes preparing and running a game much easier, and does wonders to keep online players engaged and aware during gameplay.

It’s the newest features that make the Roll20 edition more special than its past releases…for the most part. To help add authenticity, I notice that the monster tokens use art from the original adventures, which is a very nice touch to small pictures. Roll20 also includes a new tool for Rollable tokens you can use for shape-shifting creatures, which could be highly useful in other adventures if you had a mind to use them. Smaller changes include Rollable random encounter tables specific to their appropriate stories and similar Rollable loot drops.

Another small inclusion that makes your life much easier is an interactive council scorecard. As your characters travel the Sword Coast and complete adventures, they will gain or lose favor with various factions according to different criteria. Before, you had to keep track of these loyalties via an onerous spreadsheet and copious notes. The interactive version changes this into an afterthought, letting you quickly make changes and then set it to the side to focus on your adventure.

For the most part, the Roll20 edition is a slick and effective improvement to the original adventures. The only downside is occasional: map. Many of the maps in Tyranny of Dragons, such as towns or countrysides, were not intended to be run in real time. These non-gridded maps still require the player’s tokens to be on them, to give you an idea of where the action is taking place. When there is a random encounter, you will have to resort to theater of the mind, which obviates some of the point of playing with a map. To help this along, Roll20 has included some smaller, gridded maps, loaded up with dynamic lighting for the encounters that your players will face along the way. These are titled random, but there are only a few preloaded- town, forest, camp, road, et cetera. They are nice tools to keep ahold of in case you need them generally, in these adventures or others. Given the limitations, these maps are a highly creative way to increase the value of the product, and shows how much effort Roll20 is willing to innovate to make its software worthwhile.

Just as an example: this map pulled directly from the book looks right, but in combat you will need to scale everything down

Thankfully, the larger maps make some of the map features stand out, such as fog of war, which might otherwise go unnoticed. Unfortunately, many of the maps in RoT suffer from a different issue, which has to do with scale on the gridded maps. Because it did not have grid lines when Roll20 received them, the team had to make alterations that in some cases did not fit appropriately. You will find characters either too large, leading to the abstraction I mentioned above, or too small, making even normal buildings seem massive. This issue is far from everywhere, but because the maps are of such variable size over the course of both adventure you will notice it throughout the course of Tyranny of Dragons.

When you get down to it, there wasn’t much that Roll20 could add to this encounter set to improve its core issues. All they could do is precisely what they did do: make it a more palatable, convenient experience. And Roll20 did so with intelligence and creativity. Roll20 took every opportunity it could to make improvements, and this is definitely the best way to play these adventures if you choose to.

With Roll20, Tyranny of Dragons is now easier to play than ever, for everything that is worth. The core experience is a set of weak adventures, but ones that Roll20 has made effortless to get up and running, with many features to make the journey worth taking.

John Farrell is a legal aid attorney specializing in domestic violence, living in West Chester Pennsylvania. You can listen to him travel the weird west as Carrie A. Nation in the Joker's Wild podcast at: https://jokerswildpodcast.weebly.com/
Related Articles: Tabletop, Tyranny of Dragons--Roll20 Edition
Share
Tweet
Share
Submit