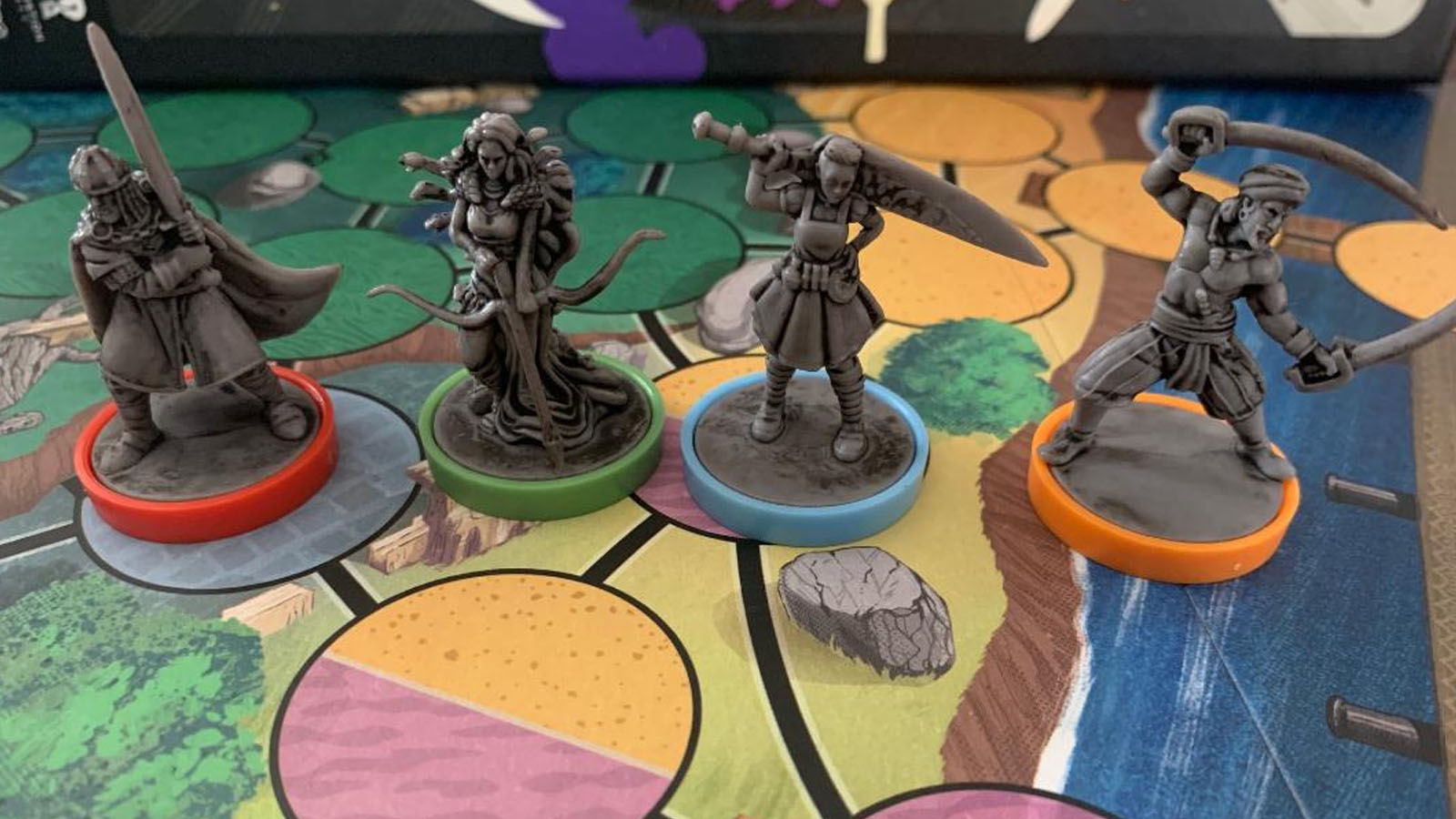 When I heard that there was a game that had Medusa fighting King Arthur with Alice and Sinbad, I knew this was a game that I would need to check out. That is what you find in Unmatched: Battle of Legends Vol 1. The theme alone on this game was so enticing and I hoped that the gameplay would match my expectations. I wasn’t disappointed.

Unmatched is more than just a game, it is a system with different fighters from all different genres thrown into combat where there can be only one winner. While this initial set came with Medusa, King Arthur, Alice, and Sinbad, there are other sets with Bigfoot and Robin Hood. The publisher even has sets that include Ingen and Raptors from Jurassic Park or the master Bruce Lee himself. This game takes these different fighters and sets them against each other, each with their own deck and unique playstyle.

Unmatched is a game for 2-4 players and published by Restoration Games. While the game can technically be played with 4 players, it really shines as a 2 player game. Restoration Games takes games from the past and brings them back to life with updated mechanics and many times new themes. Unmatched used the Star Wars: Epic Duels as its basis, but the end product differs greatly from its original source.

When you first open the game box, you are met with a quality that immediately stands out. Restoration Games continues to be a leader in their game components and this one is a testament to that. With beautifully colored decks made of high quality cards, nicely sculpted miniatures, acrylic sidekick tokens, detailed health trackers, and a gorgeous insert for component storage, the game screams quality and refinement. Everything has its place, and it makes getting into the game easier. 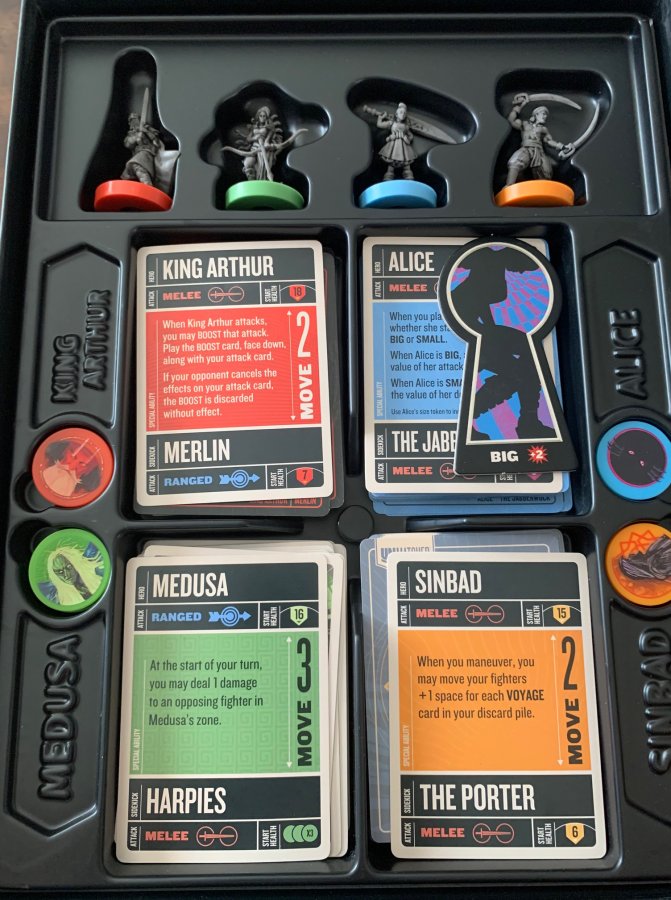 In Unmatched players will take the role of a fighter called a hero which is represented by your miniature, and sidekicks which are represented by tokens. Some heroes have only one sidekick while others have multiple. King Arthur starts with Merlin as his sidekick with his own health dial, while Medusa has 3 harpies which have 1 health each and no health dial. Even from the start, it was obvious that each of these characters would be different. 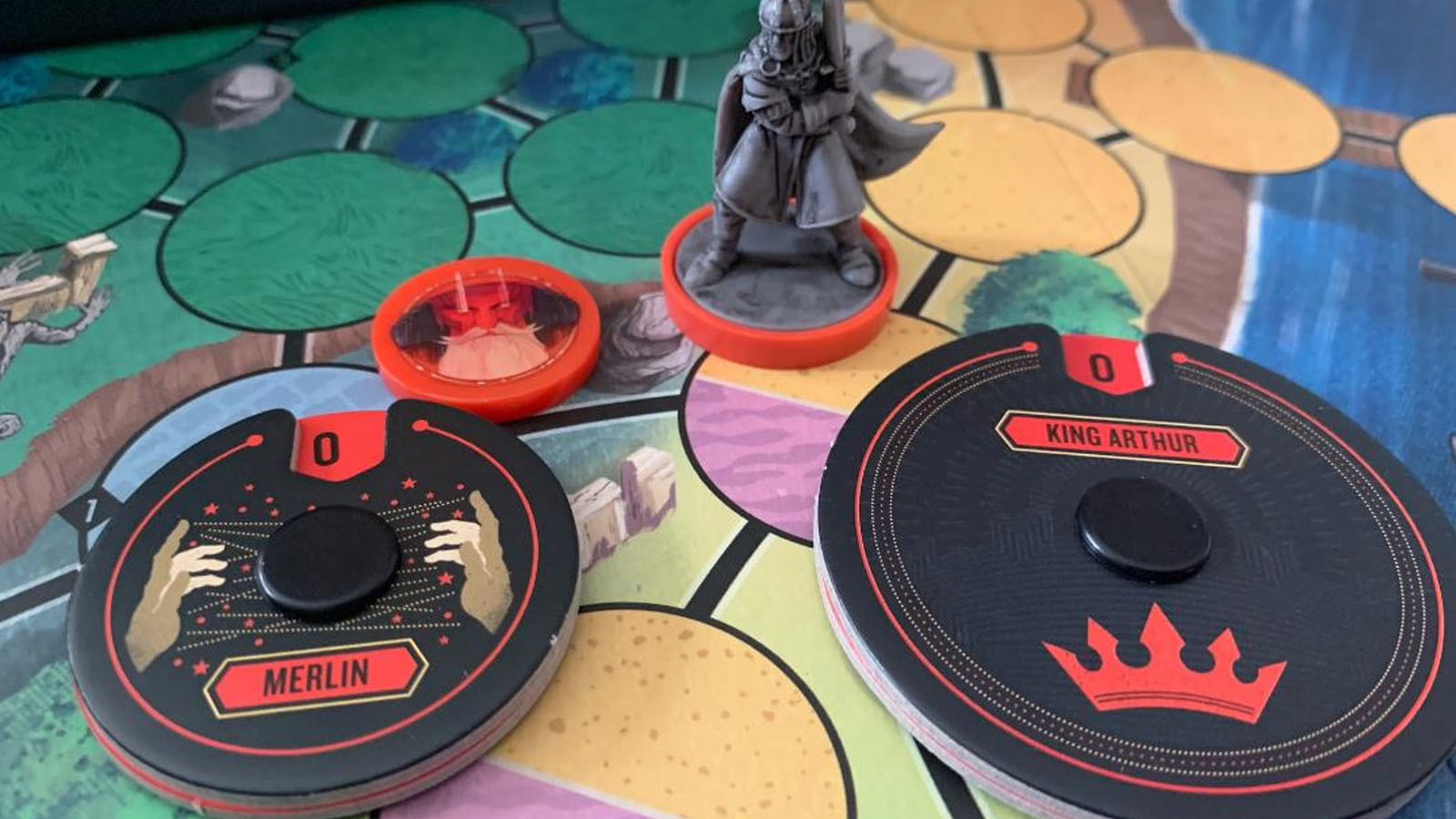 Once players decide which heroes they will use, they then must decide which map they’d like to fight on. Each map is double-sided with different layouts that add to the replayability and strategy for the game. They will place their characters out on the designated spots and then the game begins. 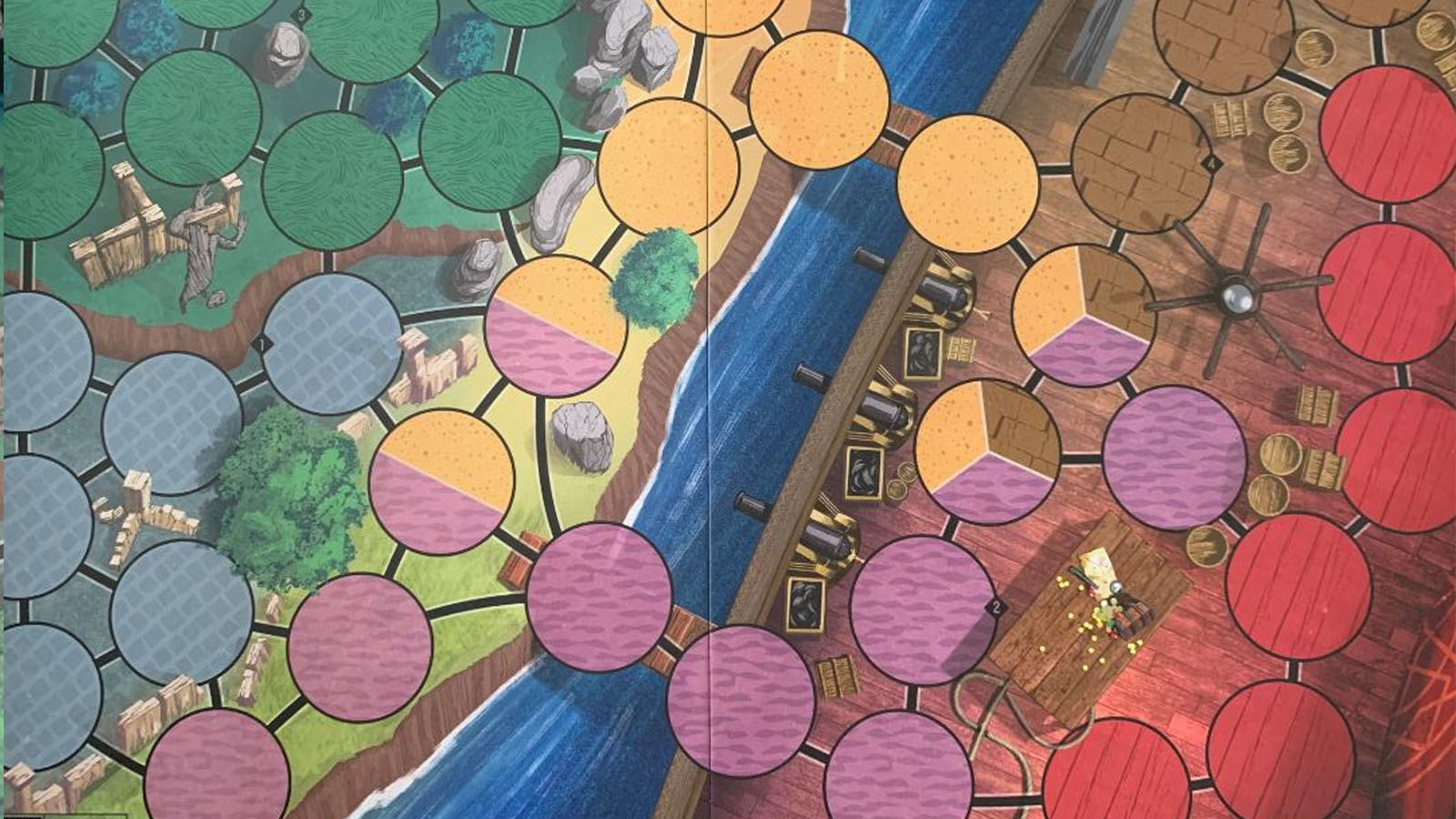 On each player’s turn, they must take two actions. For these actions, there are three different choices and players can choose the same action or choose different ones.
The first action is to maneuver. This is what we would consider moving, but the start of this action is to draw a card. This is mandatory and will be the primary way to draw additional cards. The second part of this action is to move, and this is optional. You can move any and/or all of your characters up to their move value listed on their character sheet. You can choose to move zero spaces or can also play a card at this step to boost the movement if they want to move further. Fighters may move through spaces of other friendly characters but cannot end their movement in the same space and may not move through enemy characters at all. 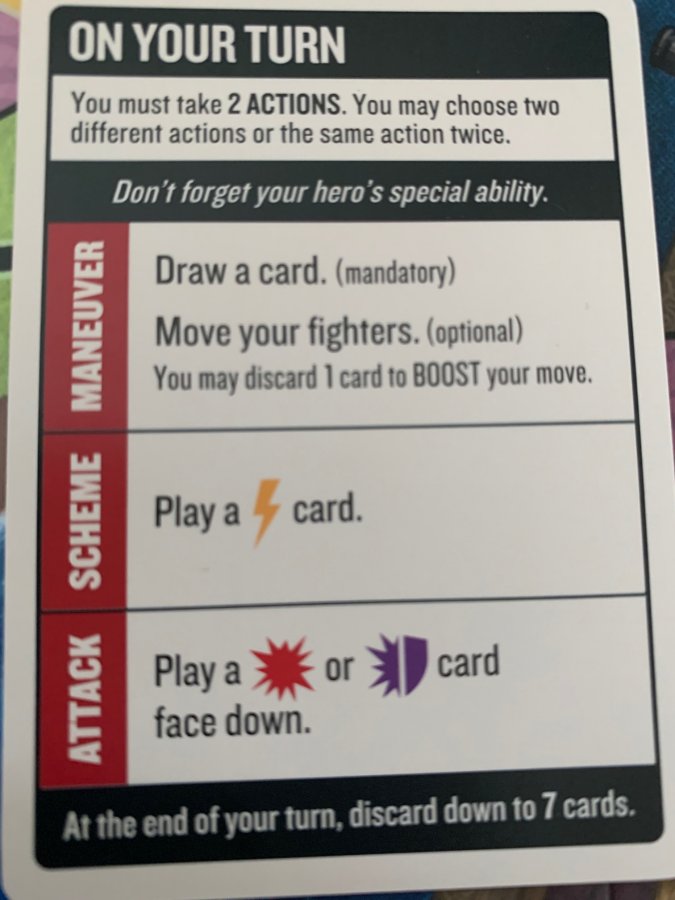 The second action is to attack by playing a card. The player will decide which fighter is attacking and who they are choosing to attack. To do a melee attack you must be next to the fighter you are choosing to attack. If you are ranged however, you will look at the colors of the spaces you are on. These different spaces represent the regions that you are in. It doesn’t matter what other regions the character is in, as long as one of the colors match the color of the attacker then they are in range and in line-of-sight. This mechanic makes it very easy to see who is attackable and for determining where the best place to move might be. The card played must match the name of the fighter they are using and must be either a red attack card or a purple versatile card. This card will be placed face down and the defender has an opportunity to play a card as well. The defending player can either play a blue defense card or a purple versatile card. They must make sure that the name on the card matches the character being attacked, however. After the cards are placed the players compare the amounts on the cards and subtract the defense amount from the attack amount. If the amount left is more than 1, then the attacker is considered having won and the character loses that much health. If they are minions with no health dials, then these minions are removed, otherwise you move the health dial down that amount. Some cards played will also have additional details which will trigger at the start of combat or based on if the player was victorious. 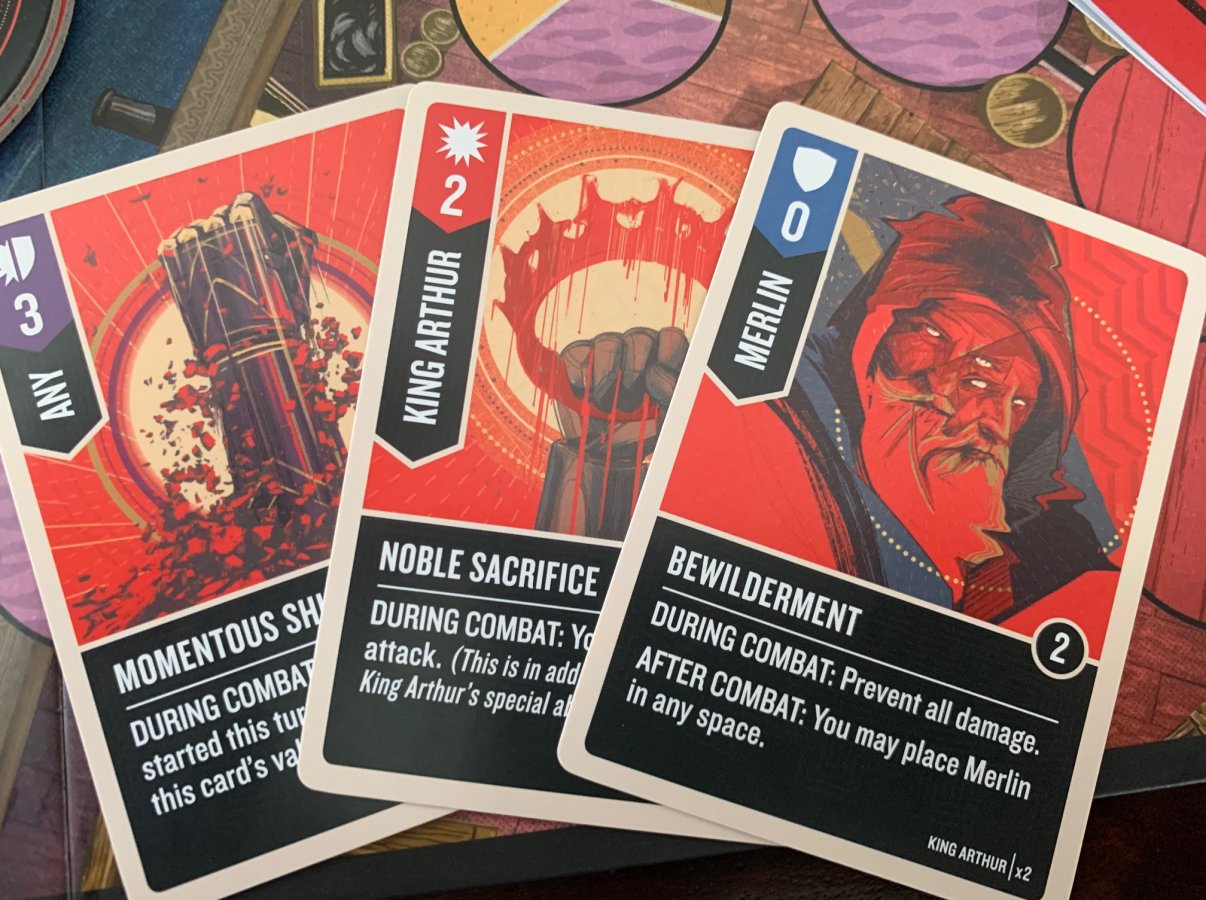 The last action that is available to players is to scheme. Scheming is playing special cards which are distinguishable by their yellow color and the white lightning bolt on them. These cards are what we might consider a special power and allow for different special abilities to occur. Sometimes they might do something as simple as drawing cards or may do something special like attack or move players with added effects.

Once players have chosen their two actions for the round play will pass to the opponent and will continue back and forth until there is a victor. When all of one person’s character’s health has been reduced to zero the other player immediately wins. While the deck may seem large at first, one thing players must remember is there will be no shuffling of their deck. Once a player’s deck is empty, each of their characters will take 2 damage every time a card is drawn. This will require players to use their cards efficiently, even if they haven’t drawn the cards they want yet. If a character is ever knocked out the cards remaining in the deck for those players aren’t able to be used except for their boost value.

Unmatched is a very simple game to start with a lot of depth that isn’t immediately apparent. There are just three actions to choose from and this simplicity helps get the game started quickly. The reference cards are very helpful to keep around as the mandatory “draw a card when maneuvering” can sometimes be overlooked. This ease of entry allowed me to play competitive games with my 11-year-old son as well as one of my gaming friends. After playing the first game, they learned some things that they wanted to do differently and immediately wanted to play again. That is one of the greatest features of the game. While matches could take longer if someone ran away the whole time or had analysis paralysis, in general the individual moves and entire match are done quite quickly. At the end of every first game, my opponent has immediately asked to play again.

Another strong positive about this game is the different characters and the vastly different playstyles. Playing as Sinbad you need to build your engine of cards to help make your plays hurt even more and deal more damage, where King Arthur tries to get in and deal a large amount of damage and then retreat. With Alice you are deciding what size will work best for the current situation and regardless of who you are playing you are trying to utilize your minions to block the opponent or scissor them for a final strike. While the base game comes with only four different heroes, they are more than enough for some diverse games and if you enjoy these they have continued to release even more heroes from all different genres.

As a whole, the game is amazing. From the quality of components including the miniatures, beautiful artwork, diverse playstyles, ease of play and expandability all lend to a great game. One slight negative that some might not even consider a negative is the need to review your deck before playing. Because of the diversity in the characters, you can’t play one and know the strategy for the others. Instead, you need to look through the cards to see how they work together so that you can formulate at least an initial strategy. As the game progresses you will be able to hone your strategy but that gives you a good starting point. This can delay the time to get into the game and could be considered a negative for those who want to just start playing. The only other negative is the game board’s abstract nature. While the line-of-sight system is awesome and very clear for determining if someone is able to be attacked, the general appearance of the board is a mix of different colors which don’t necessarily convey a distinct place. When playing I didn’t necessarily feel like I was at a certain location but instead just saw myself in certain colors. This slightly detracts from the immersive feel of the game but is just a small nitpick on an otherwise great game.

Unmatched is an easy-to-play game with diverse matchups that will have players eager to play again. With a low barrier to entry, beautiful components, and strategic gameplay, Unmatched has quickly risen as one of my favorite two-player games.

A father of three with a degree in Mathematics, Jason has spent the last 4 years building his passion for tabletop games. With a collection of well over 300 games he spends a night each week with his family introducing them to new concepts and equipping them with problem-solving skills. Jason enjoys a large variety of games but some of his favorite include Architects of the West Kingdom, Blood Rage, and Terraforming Mars.
Related Articles: Tabletop, Unmatched
Share
Tweet
Share
Submit