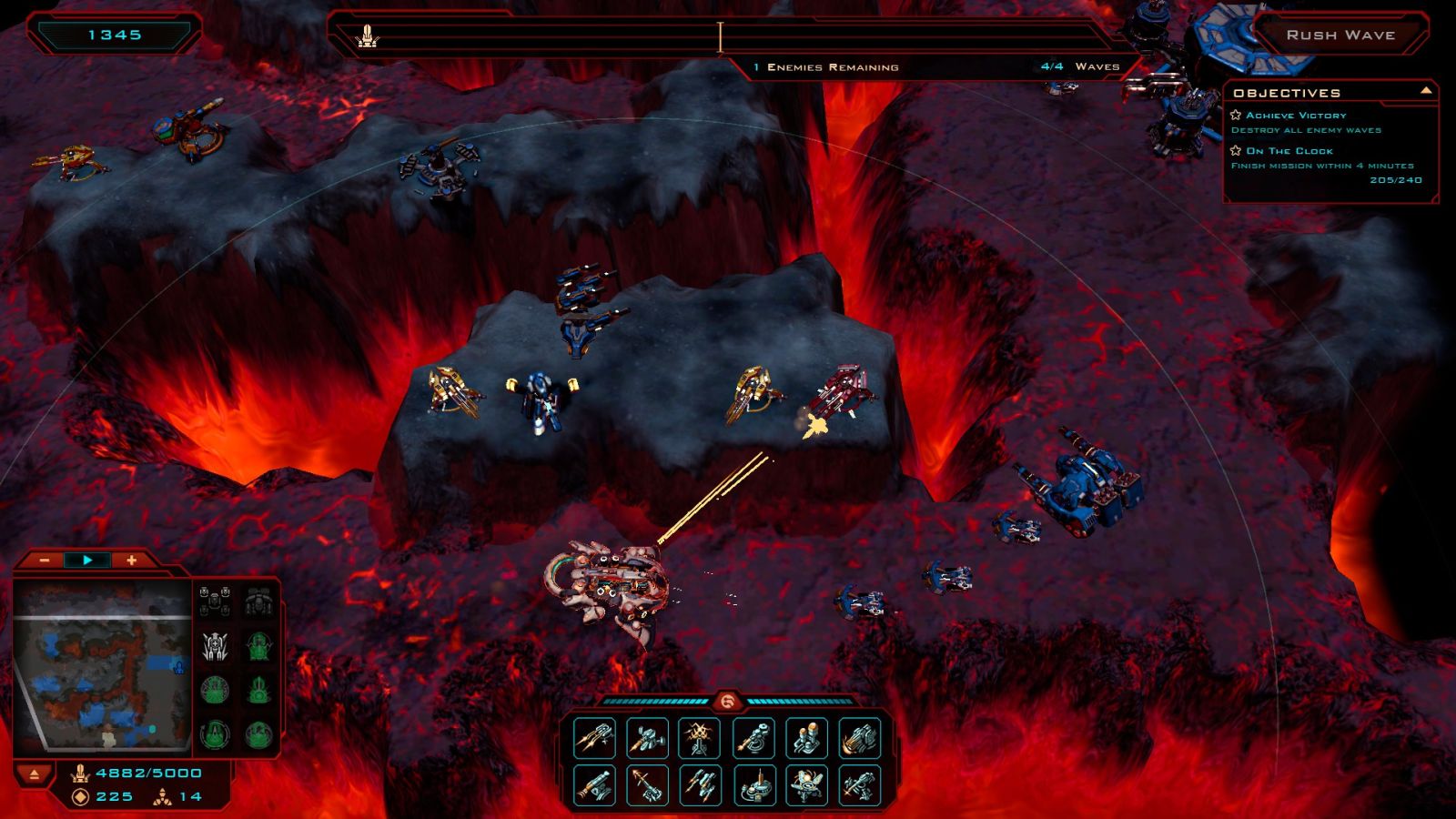 Siege of Centauri is a tried-and-true tower defense game. It doesn’t necessarily do anything to evolve the genre, but it strives to be a competent tower defense all on its own without any flashy presentation that would distract from this no-nonsense game. While it does take place in the Ashes of the Singularity universe, you don’t have to know anything about the universe to enjoy it. While you’re progressing through the campaign, you’ll unlock new weapons and orbitals to help against a different variety of enemies. Each enemy type has its own set of weaknesses, and planning ahead is the first step of the puzzle. 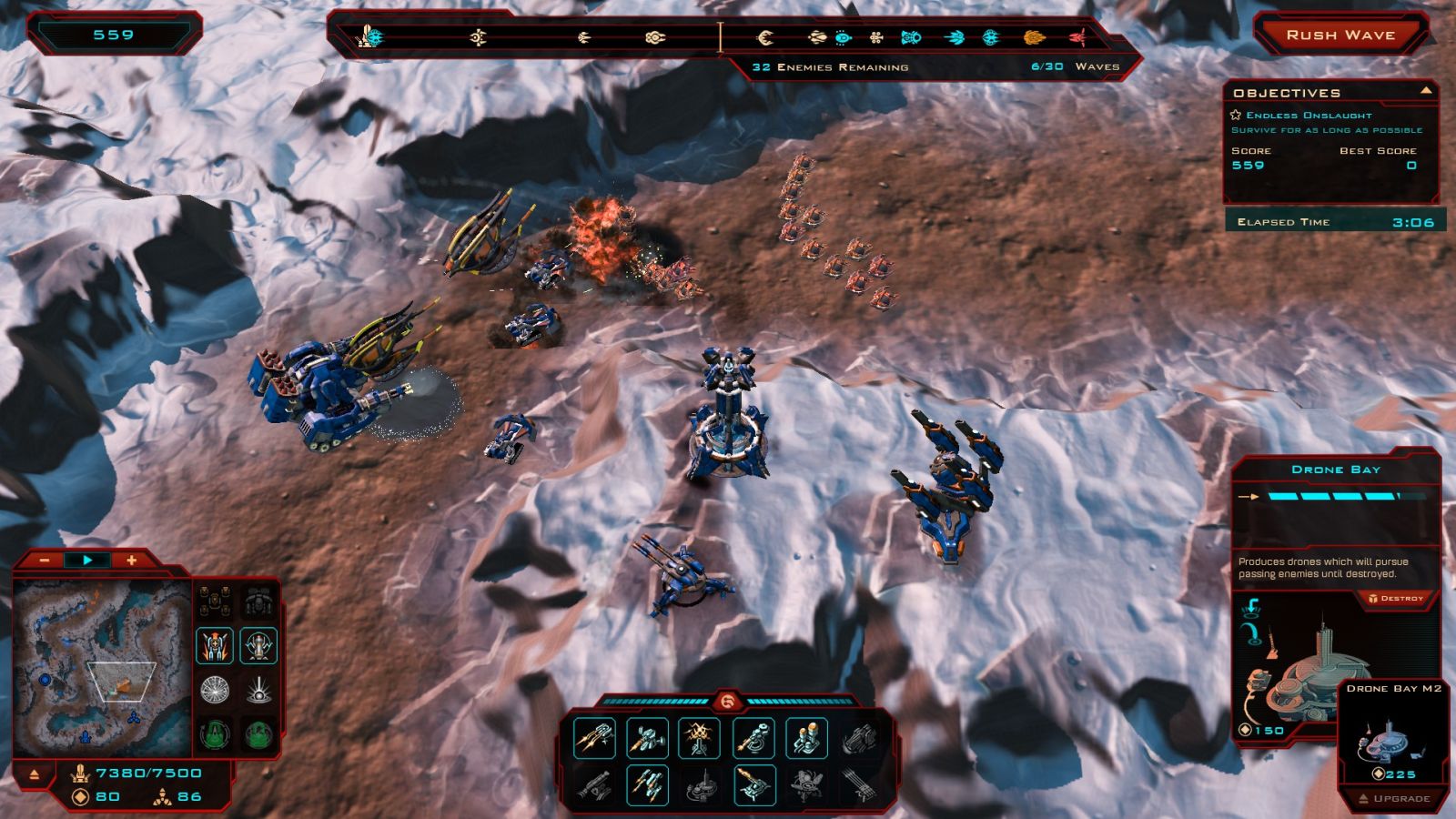 Each mission itself feels like a puzzle. Starting off, you’ll have a limited variety of turrets to place, but later on the number of kinds you have will be more than you’re allowed to bring with you. Sometimes, you’ll have to play through the mission to figure out which turrets work best, but luckily the enemy types are clearly spelled out before you start the mission. You can see each enemy coming, and hovering over it will show you their weaknesses. Not only that, but you can see what side the enemies will be coming from, making the game more about planning than reacting. If you’re like me and you need a little more time to think about what to do next, you can slow down time briefly to place any towers before the enemies arrive. 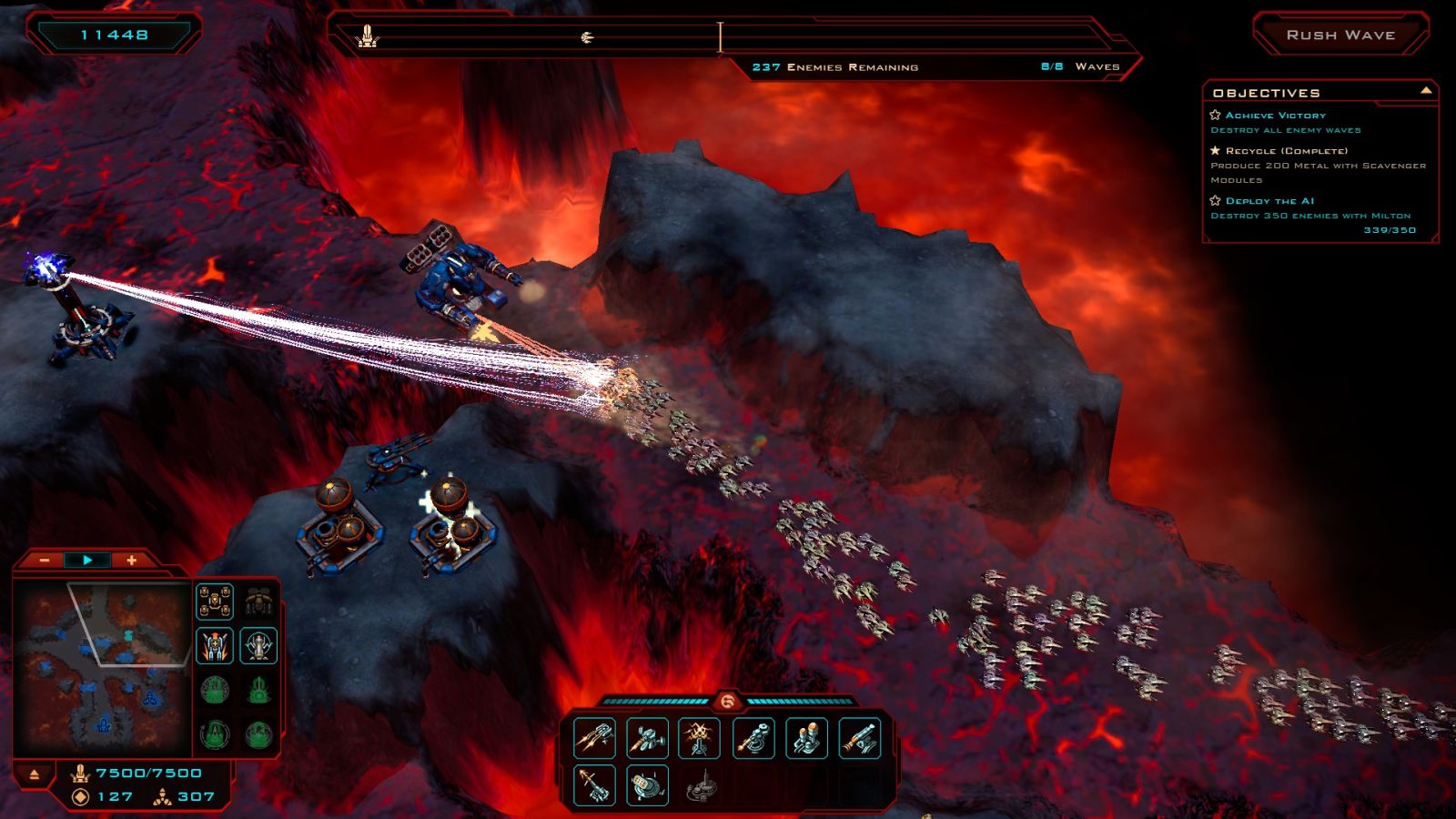 With warning that a swarm of tiny enemies was approaching, I decided to take them out with lightning. And of course, a Milton orbital for good measure.

But, there’s an even easier way to determine what turrets you should bring with you without analyzing every enemy. There are three main turret types. Ones that focus on damage, ones that focus on shield damage, and ones that affect aerial units. Units with shields will have a blue icon, while aerial units will usually have a red icon with a few exceptions. This means if you see that they are coming up, no matter what they are, it’s best to plan accordingly. Then, of course, there are dreadnaughts: Incredibly heavy units that’ll plow through all of your turrets if you don’t have your defenses set up to slow them down and take them out before they reach your colony. 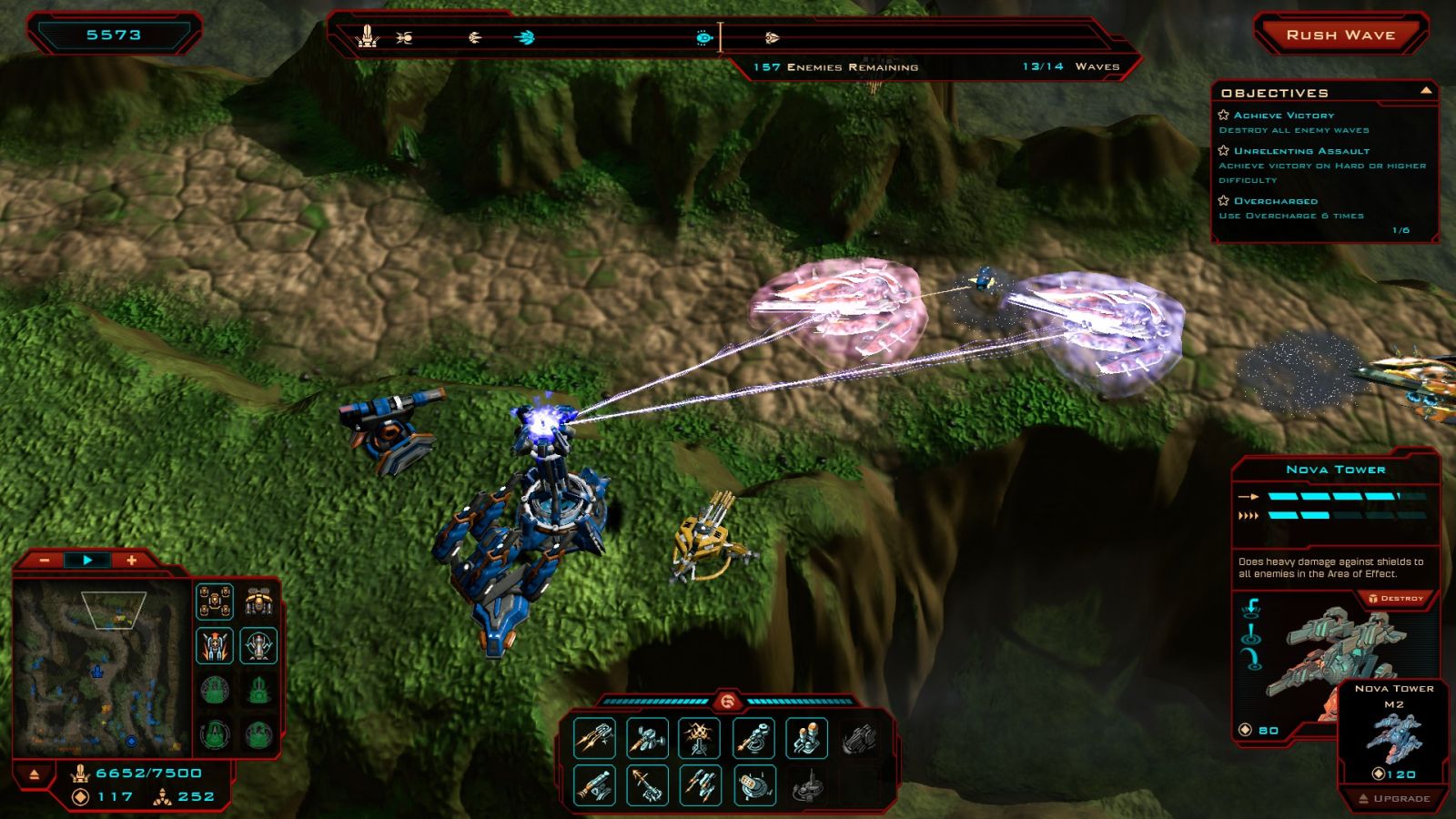 Before I can do damage, I have to take care of those shields.

Each mission has its own leaderboard as well. The score for the leaderboard is dependent on a few factors such as how many times you rush a wave (make it come sooner), your difficulty, and speed. You don’t have to worry about any random elements, because the waves and the paths the units take will be the same every time on that specific difficulty. This is also useful if you’re like me and failed a mission several times and needed to learn the right combination of turrets to use.

Leaderboards aren’t the only reason to replay missions as they have their own set of achievements as well. These don’t seem to vary too much, as they’re often things like don’t use a specific unit, don’t let any damage happen to the colony, or clear the mission under a certain amount of time. These were often challenging to hit, prompting me to try a few times with a few different strategies to hit them. 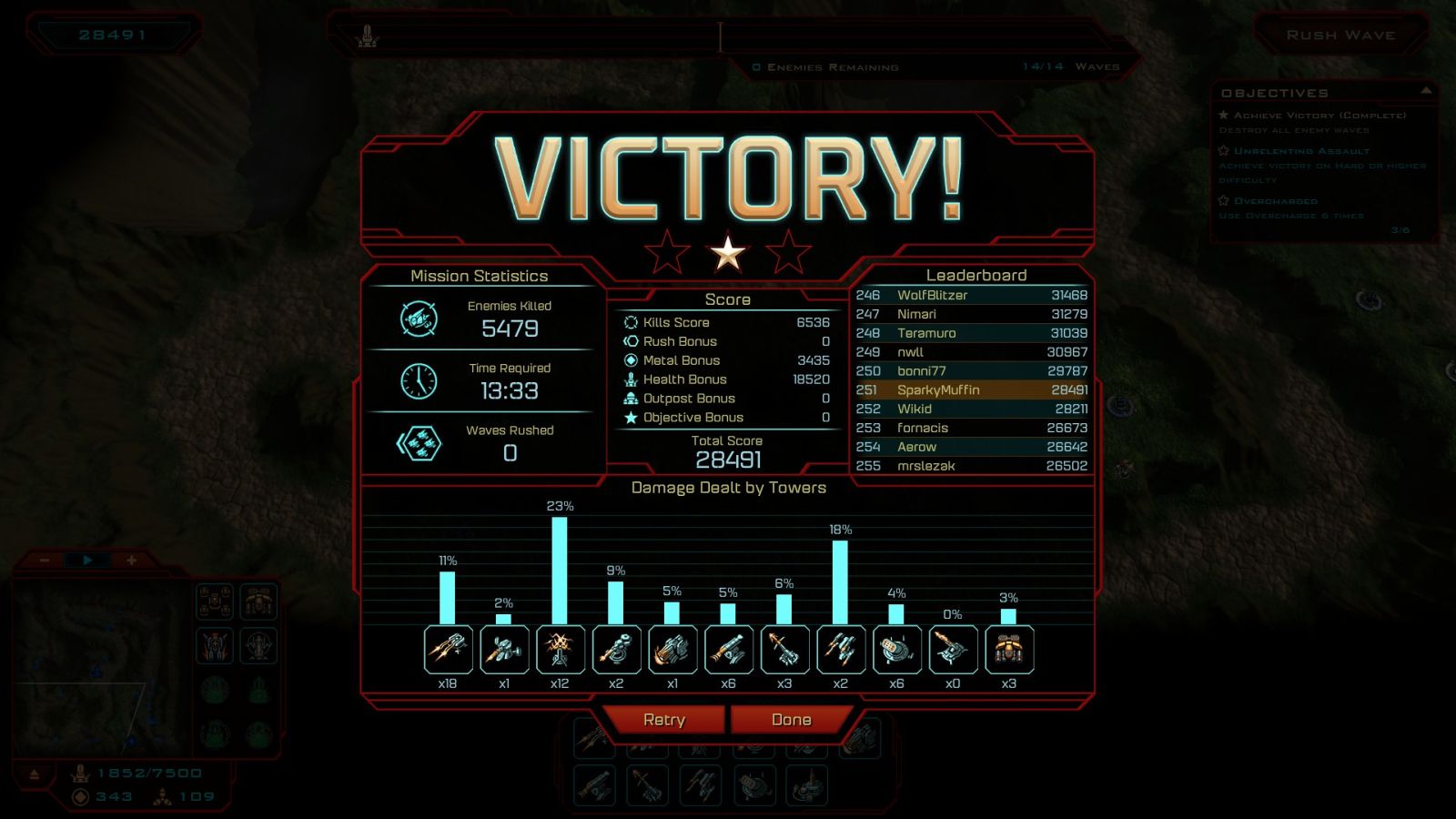 I feel like I could do better than 13:33 and 0 waves rushed. Let’s get that score higher!

When I played the game at the start of its early access period, one of my complaints was that the game’s difficulty curve was too steep. Since then, they’ve added new missions in-between others that introduce these concepts better and even give better towers to help deal with these threats. It’s more of a steady progression of difficulty now. 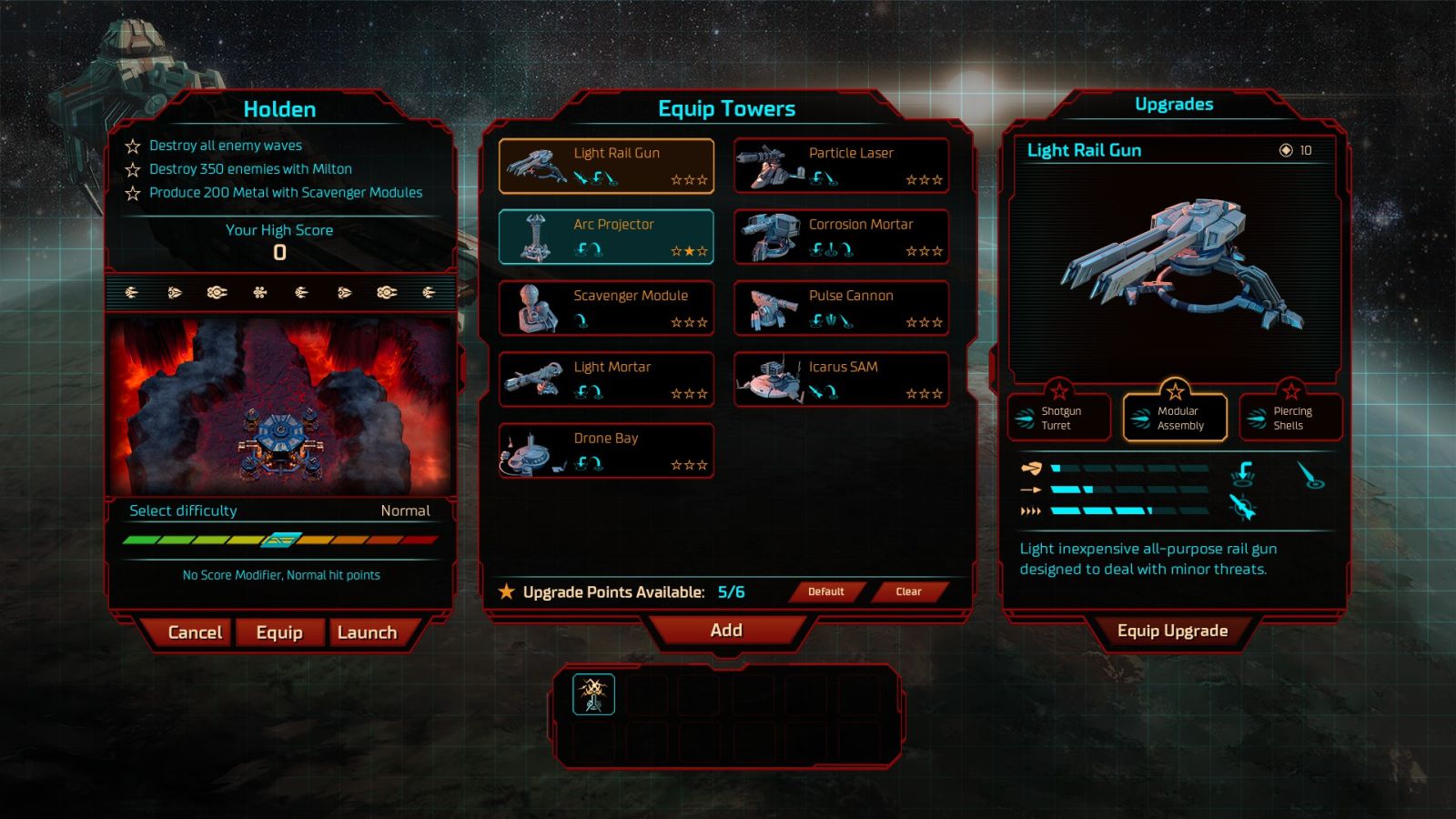 Every tower has a set of upgrades. Some of these allow you to attack different kinds of enemies with that tower or affect your colony.

Visually, the game feels a bit bland. It’s not entirely clear where you can place towers until you have them selected, but the environments blend together and there aren’t really any unique landmarks to give this world life. From a gameplay standpoint this is fine, it’s easier to place towers without trees in the way, but the only things with life are the towers and the enemies. 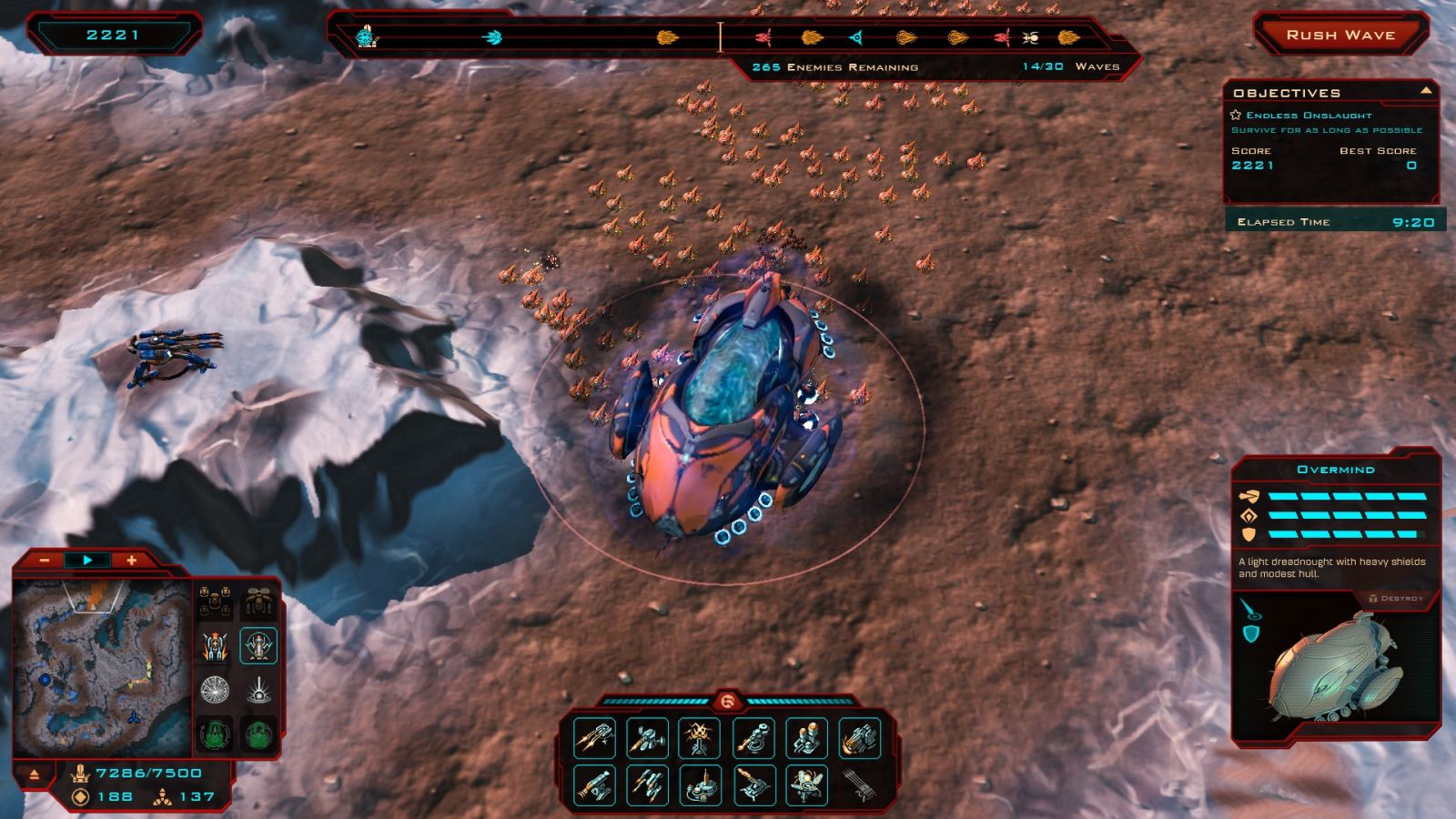 As if I didn’t have enough problems, here comes a Dreadnaught.

In addition to the campaign, with over 20 missions, Siege of Centauri allows players to put their endurance skills to the test with Endless Mode. This mode is exactly what it implies, an endless gauntlet of a large variety of units coming for your colony from several directions, depending on which of the three maps you pick. A problem, if you can call it that, with this mode is that you’re stuck with the towers you pick in the beginning. You have to hand pick each tower and its special perks each time without an opportunity to save a loadout for faster experimentation. Being able to save a loadout would have been useful for the campaign as well. 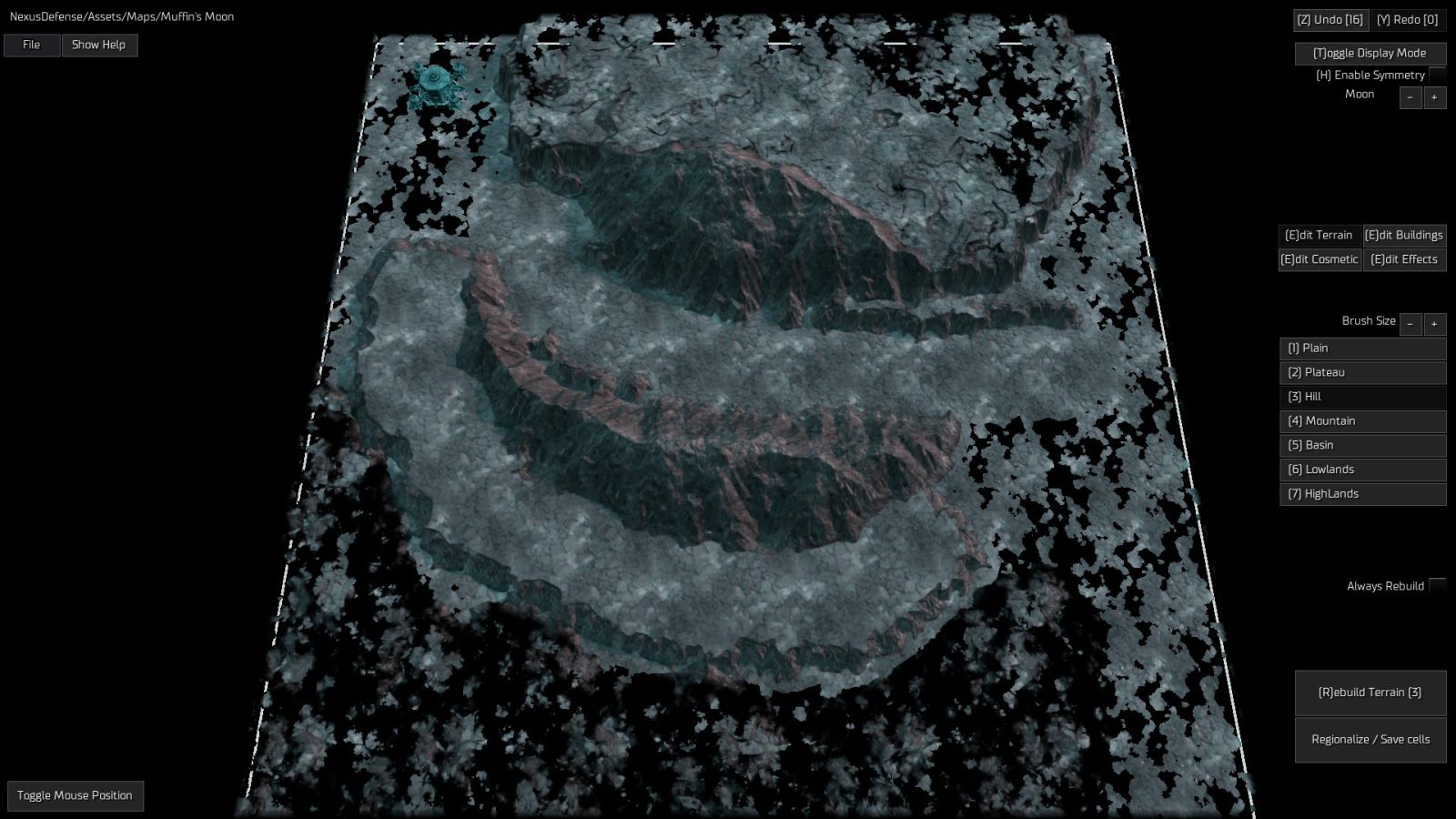 I definitely have a few holes I need to patch up before this is ready for play.

Lastly, you have the ability to download scenarios other people have made as well as create maps. This tool is very simple to use, with your mouse being the brush to draw different kinds of landscapes for enemies to march on or locations to place your turrets. I may not be the most creative person when it comes to making these maps, but the tools were easy enough to use.

Overall, Siege of Centauri is, as I stated in my preview, a competent tower defense title. While it doesn’t do anything groundbreaking, it doesn’t necessarily do anything wrong for the genre. It’s a fun distraction that can even be addictive as you try to climb the leaderboard.

Siege of Centauri is a fun tower defense title for a good price. While, visually, there’s more to be desired, it runs incredibly well despite the thousands of enemies that can flood the map as you place your towers in an oftentimes frantic and addictive mission to protect your colony. It's well worth the asking price.

Sean Anthony likes to combine two of his passions: gaming and writing. Gaming has been a huge part of his life ever since he played his first game as a child, Kirby's Adventure. He aspires to have his name attached to an article that makes the whole world go, "Huh, that's neat, I guess."
Related Articles: Siege of Centauri
Share
Tweet
Share
Submit