Curse of Monkey Island is my favorite adventure game. It’s funny, well animated, and the puzzles, while ridiculous at times, are still fun to work out to this day. So why am I talking about Monkey Island in a review about Paper Mario? Well, I found that Origami King has much more in common with classic adventure games than even other games in its own series.

In Paper Mario: The Origami King, Princess Peach invites Mario to the Origami Festival in Toad Town. Mario and Luigi arrive to find the town mysteriously deserted. The bros enter the castle only for the door to lock behind them, and while Luigi searches for the key Mario meets with Peach, who has been folded into an evil, origami version of herself. She throws Mario into the castle dungeon where he meets an origami girl and Olivia, who tells him that her brother, Oli, is responsible for Peach’s and many others’ transformation and is trying to turn all the citizens of the mushroom kingdom into his Folded Soldiers. Now it’s up to Mario, Olivia, and a few friends along the way to destroy the streamers holding the castle hostage and stop the Origami King. 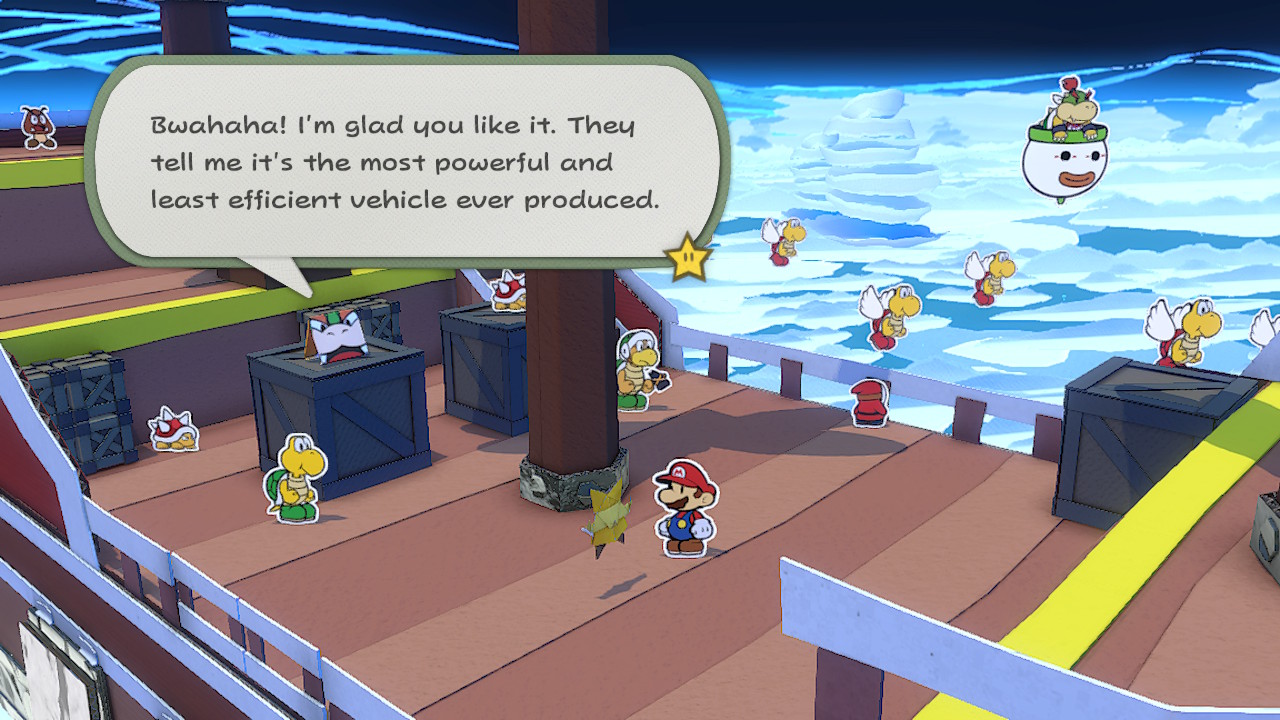 While the Paper Mario series has its roots in turn-based RPGs, ever since 2007’s Super Paper Mario the series has been moving further and further from the genre. I grew up with those first few games, they served as a gateway into a type of game I love, so I’m more than a little sad to see this change. But! I understand that game developers, being one myself, don’t want to make the same kinds of games over and over again. They want to create new things, try out fresh ideas, and grow as artists and people. So, while I haven’t enjoyed the previous two entries in the series (especially Sticker Star), I looked forward to giving Origami King a chance to be its own thing, and not live in the shadow of the original and Thousand Year Door. While Origami King shines brightly in some aspects, unfortunately there are equally as many dim ideas and half-baked design choices.

From a graphical standpoint, the game is stunning. Everything looks like it’s actually made of various forms of paper or cardboard, characters’ paper bodies react naturally to wind and force, and there’s some incredible lighting on display here. However, I find the game to be sorely lacking aesthetically. Aside from a few locations like Shogun Studios and a neon-lit city in the desert, most of the places you’ll visit are just generic video game environments such as a verdant grassland or the big blue sea… but in paper. The “but it’s made of something front the real world” is an unfunny gag the series has relied on far too much in recent memory. Many of the bosses you fight are just various forms of stationary like colored pencils, scissors, or tape. This has been the same joke three games in a row, and I don’t know about other people but I am sick of this lack of creativity. 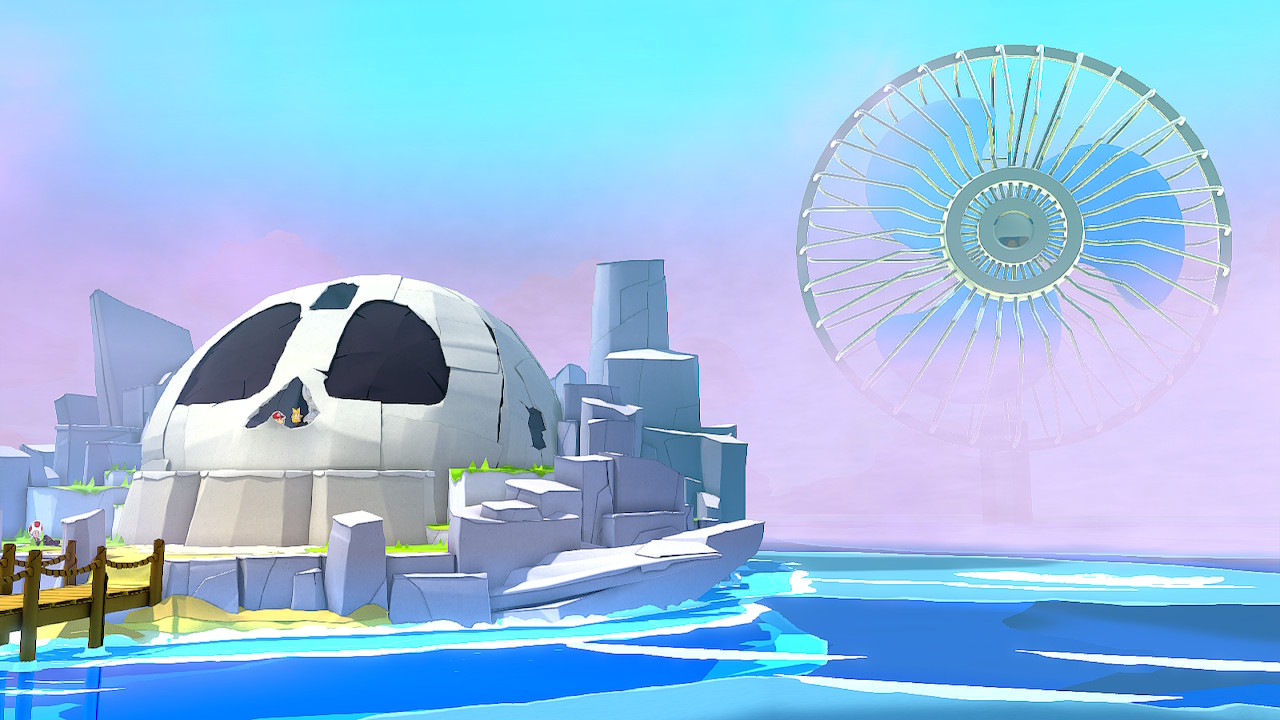 The characters Mario encounters are equally as generic, mostly different colored toads or Bowser’s minions with very few standouts in terms of personality or design. The most memorable character in the game is a Bob-omb named… Bob-omb, who Olivia dubs Bobby because of a running gag where she can’t remember his actual name. Bobby supplies some of the best comedic and emotional moments perhaps of the entire series, but unfortunately leaves the party very early on and no one can quite fill the explosive hole he left behind. Thankfully, the idiotic delight that is Olivia sticks around for the entire journey. She was only recently folded and brought to life, so she doesn’t know much about the world, which leads to some laugh out loud funny moments throughout the experience. The story itself is also surprisingly dark and has a focus on horror. Specifically body horror, of all things. There were quite a few moments where I wondered how the heck this game got an E rating, but all those moments are delightfully refreshing to see in Mario’s cheerful world, if a bit disturbing.

The best moments of Origami King are the humor and when you’re solving inventory-object puzzles in the overworld, hence the comparison to Monkey Island. By exploring and speaking to NPCs, you’ll learn more about what to do next and find items to use with other items to progress. There are also some environmental puzzles like sliding an ice block into a spike pit to cross or figuring out how to weigh down some switches. In each area you can also find hidden Toads who, when found or rescued, will join the audience in battle and possibly give you HP and strength increasing hearts. I loved Where’s Waldo as a kid, so finding these Toads was a bit of an obsession throughout my playthrough, and finding all of them in a location can unlock things such as a sound test. Mario will also encounter, although much, much less frequently, Paper Macho soldiers, large paper mache versions of classic enemies. To defeat these behemoths, you need to bait their attacks and hammer their backsides a few times. If that’s all there was to combat, I would have adored Origami King, but we have yet to discuss the new battle system. 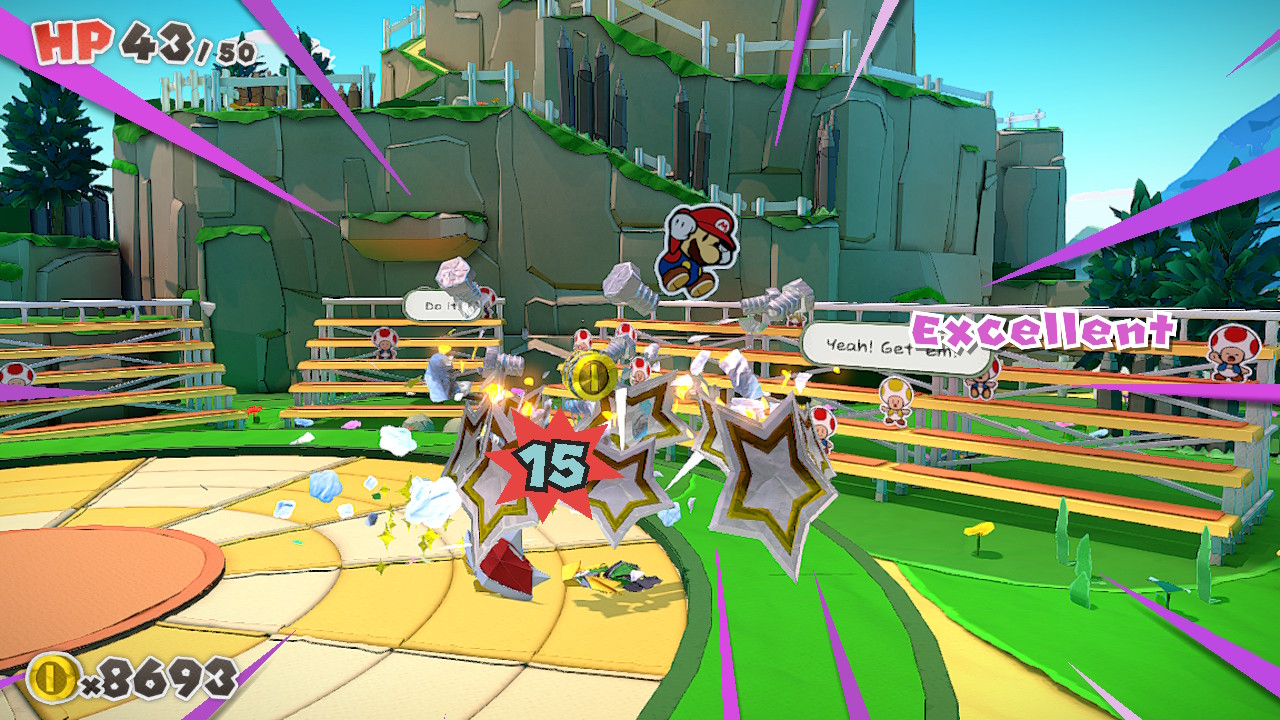 When encountering a Paper Soldier on the field, Mario will find himself in the center of a rotating arena and engage in a puzzle battle. To attack in the most efficient manner, you need to rotate and scroll sections of the battle field to line up enemies in either a 1×4 line or a 2×2 square to jump on or hammer them respectively. Successfully arranging adversaries will grant Mario a x1.5 attack power bonus to more quickly dispatch of his folded foes and use up less of his breakable arsenal. I found these mini-puzzles to be either insultingly easy or almost impossible, with absolutely no middle ground. If you’re having trouble lining up ornery origami opponents, you can pay Toads to help you in a random way, ask Olivia for (usually useless) advice, or take from your copious coinpurse of coins to extend your time indefinitely. This currency is where the game’s biggest problems arise. Coins are used for everything. In addition to what was previously mentioned, they can buy you weapons, accessories, and are at times required to progress. As a result, the game drowns you in coinage – I had over three thousand about twenty minutes into the game. You will never run out of money, so why should I care about breaking weapons or bothering to solve puzzle battles when I can afford to make those problems disappear? The only reward you get from battles is more coins, so much like Sticker Star and Color Splash I started to avoid battles altogether. I didn’t find combat to be enjoyable in the slightest anyway, and dreaded any and all encounters.

Boss battles try to mix things up a bit, with the boss standing in the center and Mario needing to work his way there from the edge using tiles scattered around the arena to move and attack. This change doesn’t improve on the battle system, as it only slightly changes something already tedious. These battles usually expect you to take a single, very specific action to do damage or make the boss vulnerable, and each of these fights consist of doing that over and over until you win. It may sound like typical RPG battles, finding the best strategy and repeating that to victory, but it lacks the strategy, mix ups, or even critical thinking. Notes you can acquire on the battlefield will straight up tell you what to do, the boss will repeat the same attack pattern over and over, and if you take damage you can just pay toads to heal you or show the path Mario will take. Now I don’t consider Origami King to be an RPG, it leans more towards adventure game stylings, but it should really stop trying to act like one if it wants to do its own thing. 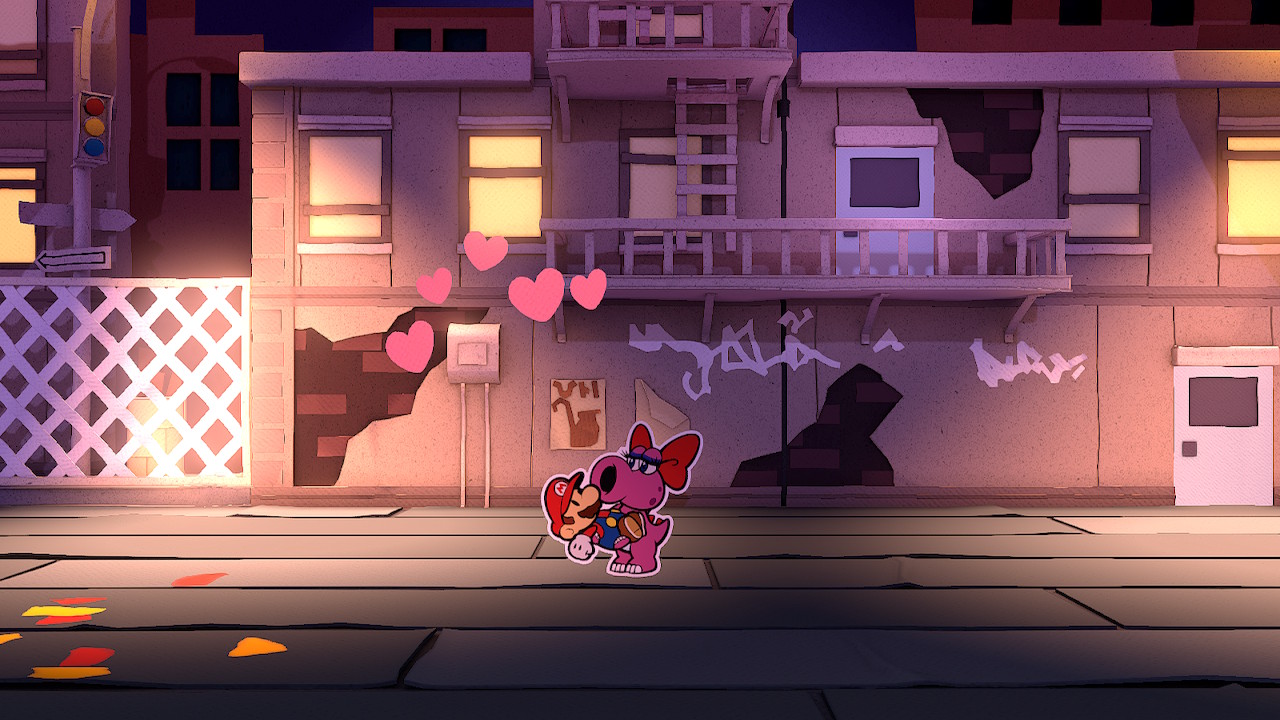 If all of the puzzle battles were removed entirely, with no other changes, this would be a fantastic game and the best Paper Mario entry since 2007. Unfortunately, combat makes up at least half of the game and brings down the otherwise excellent adventure portions. While Paper Mario still has a long way to go to be truly great the developers vehemently refuse to return to the series RPG roots, The Origami King is a fold in the right direction.

While Paper Mario: The Origami King makes excellent strides in terms of humor and adventure game design, it’s still sorely lacking aesthetically and features a horrendous battle system that only gets more frustrating as you play. I’ve given up on the series returning to the style of my childhood’s classics, but if the series ditches battles entirely it could make for some extremely fun adventure games.

David is the kind of person to wear his heart on his sleeve. He can find positives in anything, like this is a person who loved Star Fox Zero to death. You’ll see him playing all kinds of games: AAAs, Indies, game jam games, games of all genres, and writing about them! Here. On this website. When not writing or playing games, you can find David making music, games, or enjoying a good book. David’s favorite games include NieR: Automata, Mother 3, and Gravity Rush.
Related Articles: Paper Mario: The Origami King
Share
Tweet
Share
Submit