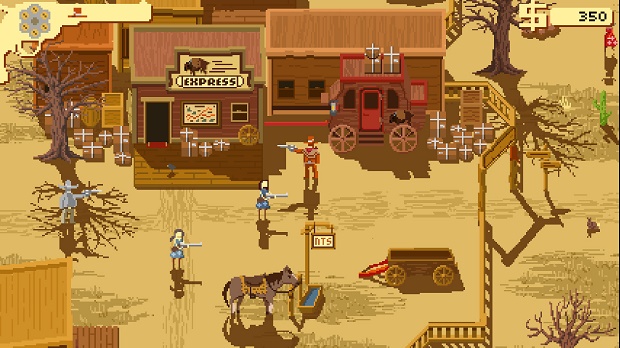 I’m not going to lie: I almost hung up my spurs and quit within the first ten minutes of playing Westerado: Double Barreled.

I felt frustrated by how it didn’t really explain much of what I was supposed to do, how the game’s health bar works (or really how anything else works, for that matter). Combat is strange, the game’s flow is strangely open-ended, and entire quest lines can be ruined by a stray gunshot making its way into one of Westerado’s many 8-bit inhabitants.

But then, suddenly, everything clicked. You’re supposed to fail. Westerado doesn’t just want you to follow the beaten path. It wants you to poke, to prod, to experiment; to try to break the game. It wants to see what kind of trouble you can get yourself into, because in many ways, its developers are already one step ahead of you. And once I realized Westerado: Double Barreled is more like an open-ended set of toys to play with, everything opened up, and I fell in love.

In Westerado, you play as young cattle herder whose family has been murdered by mysterious assailant. Armed with a six-shooter, a few hats, and a single clue, you’re sent off into the world to find out who was responsible for the deaths of your loved ones. On the way, you’ll take on odd jobs, complete quests for various townsfolk, and make decisions that will ripple outward and affect your game. Rewards come in the form of cash, new weapons, more hats to fill up your health bar, or additional clues to help you find the perpetrator.

What makes Westerado special, though, is how those actions actually change how you play, and many of those actions come from the barrel of your gun. In an interesting turn, you can point your gun at anyone in the game, even mid-conversation. Don’t like the tone of someone’s voice or their requests? Pull your gun on them and watch ’em sing a different tune – or see them pull their own gun on you in response.

This simple addition takes what would have been a fairly standard (if quirky) Zelda-style adventure and turns it on its head. At one point during my playthrough, I’d been ripped off by a local delivery man, and when I went to confront him, he didn’t have the money to replace it. So I gunned him down. This… didn’t go over well with the town, causing many of the residents to hunt me down as I stepped outside, and it also caused one quest line to shut down entirely. Worth it.

The world of Westerado is malleable, where the choices you make on various quest lines open up different endings, where who lives or dies determines how you’re able to complete your quest and avenge your family. It’s also fairly short, clocking in at around two to three hours for each playthrough. Its brief length is actually a boon – the real fun comes when you revisit the game again, bringing with you the knowledge you learned on a previous playthrough to find one of its many different endings. Maybe this time, you won’t let your itchy trigger finger get the best of you.

Its low-fi Atari aesthetics help give Westerado some real personality, even with only a handful of pixels, but it also forms the crux of two of its biggest problems. Shooting in Westerado is awkward. You can only fire to your left or right, and actually firing your gun is a three step process – draw your pistol, pull back the hammer, then pull the trigger. Once you figure out how to actually line up and fire shots with any sort of accuracy, combat gets much easier, but you’ll stumble your way through your first couple dozen fights until you finally get the hang of it.

More egregious is how the game requires you to spot specific characters based on the clues you’ve received while you play. As you complete quests, you’ll find out more details about the killer – hat size, pant color, that sort of thing. Eventually you’ll have enough clues to find them, and then you’ll actually have to find them. Picking out that specific someone out of a crowd of pixelated people who all look the same is much harder than it sounds, and while you’ll eventually learn to distinguish different characters from within a crowd, it’s the one case where its adherence to its retro style kicks itself in the butt a bit.

But even with these issues, Westerado: Double Barreled is still a delight to explore, a surprising Western-themed playground full of unexpected events and exciting shenanigans. And if you give it some time and let it into your heart, you’ll find a game worth exploring again and again.

Westerado: Double Barreled has its issues, but it provides a grand adventure on a small scale and lets you find something new each time you play.

I've been gaming since my dad made the bad decision of buying me a Nintendo when I was four years old. Every day I'd find myself with my face glued to a TV screen, punching away at buttons, getting furious with Bowser, Dr. Wily, and those freakin' birds in Ninja Gaiden. Since then I have failed to get my parents to play any board game with me, I sold my full copy of Earthbound with box and guide for $300 to some dude in Austria for rent money, and I still believe in Nintendo even after all these years.
Related Articles: Westerado: Double Barreled
Share
Tweet
Share
Submit