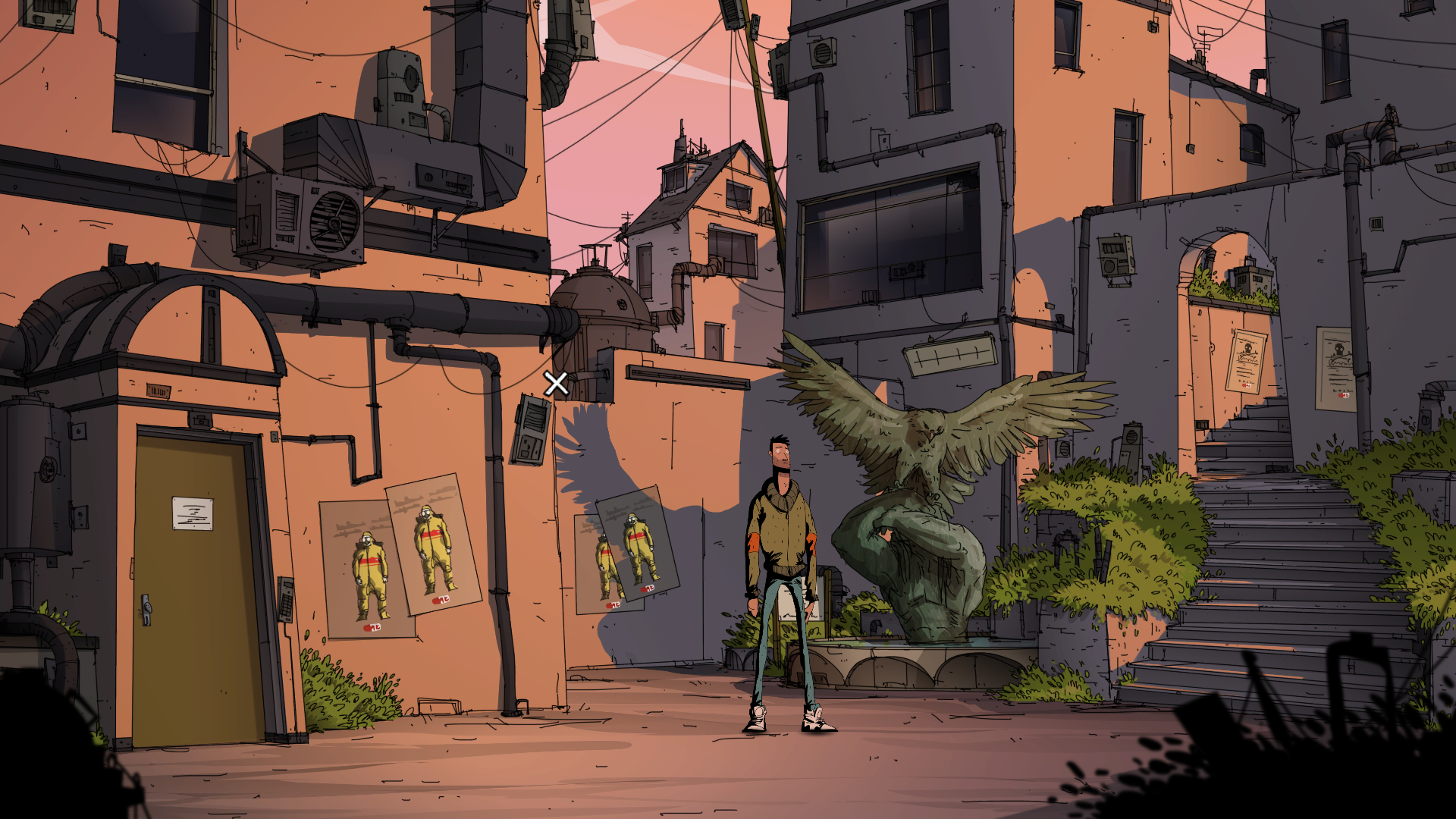 I’ve been on a huge adventure game kick this year, and so I was excited to test out Unforeseen Incidents when I found out about it. What I found in exploring the city of Yelltown was a creepy yet satisfying journey featuring quirky characters, government conspiracies, and a terrifying illness.

You play through Unforeseen Incidents as Harper, a friendly underachiever who lives in a small apartment full of tech junk located in a small area called Yelltown. You seem to be the resident fix-it man, and your first task in the game is to fix the local professor’s computer .On your way back to your apartment, you find a sick woman who has a message she has to get  to a local reporter. The woman is quickly taken away by RHC, the company that’s been put in charge of finding a cure to the disease plaguing your town. Going forward, you enter a world of deceit, panic, and mystery.

In addition to a cohesive and interesting plot, the writing and voice acting is well done. In some adventure games, if you click on the one item multiple times, you’ll get the same exact line on repeat. Unforeseen Incidents often has two or three lines per item, and almost every item is unique. You can also learn more about the characters by doing this, such as hearing stories about Harper’s family by clicking on each individual photograph in his apartment. It’s a nice touch that adds some depth to the story.

The first thing I noticed about Unforeseen Incidents is the unique art style. The characters and scenes are drawn in a sketchy style that fits a semi-deserted town full of junk and beat-up equipment. When you enter conversations with the other characters, the screen zooms on them, sometimes causing the otherwise beautiful artwork to degrade in quality (despite playing it on Fantastic graphics setting). It’s jarring when the graphics suddenly decrease in quality, and took me out of the immersion a bit. Some parts are more noticeable than others, and it’s not too bad–but it’s definitely noticeable. The game’s music also fits this tone well, as it’s not too foreboding but still adds to the atmosphere of mystery.

The gameplay is pretty standard for a point-and-click adventure, but there are little twists thrown in occasionally — from a hacking sequence involving a path puzzle to an area in which you need to sneak around to avoid being caught and having to go back to the beginning of that area. These additions to the traditional point-and-click are welcome, and add a bit of fun and variety to the game.

Something Unforeseen Incidents does exceptionally well is creating puzzles that are difficult but not excruciatingly painful in the way that old LucasArts games were known to be. You’ll have to listen to otherwise innocuous conversations between characters or recall specific facts to know what items to select. I did get stuck on one particular puzzle involving the crane in the junkyard, but after leaving the game for a few hours before trying again, I was able to figure out. In addition, if you fail a few times, the characters will start to give you little hints that help you along the way. If you are a glutton for punishment in the form of overly difficult puzzles, this game isn’t for you. However, if you’re like me and have had to look up walkthroughs to get through The Secret of Monkey Island, you’ll find this game enjoyable.

The load times between areas is longer than ideal, with a black screen lasting quite a few seconds as you go from room to room, but it’s a small defect of the game. It may not be a big issue, but it’s one that I found myself frustrated with a few times.

Unforeseen Incidents is fun romp with an interesting plot that will draw you in and enjoyable characters to go around. If you’re a fan of traditional adventure games, and are looking for a fun experience, Unforeseen Incidents will be fun game for you to explore while uncovering the secrets hidden within Yelltown.

Born and raised in Los Angeles, Maddy has been addicted to video games since watching her dad play The Secret of Monkey Island when she was 5 years old (though it took her another 14 years to finish the game). In addition to playing video games, she's a proud cat mom, a lover of bad jokes and dark eyeliner, and a terror on the dodgeball court. Maddy is currently pursuing her MBA at UCLA Anderson and starting in June, she will be interning at Riot Games with the Player Growth department.
Related Articles: Indies, Unforeseen Incidents
Share
Tweet
Share
Submit