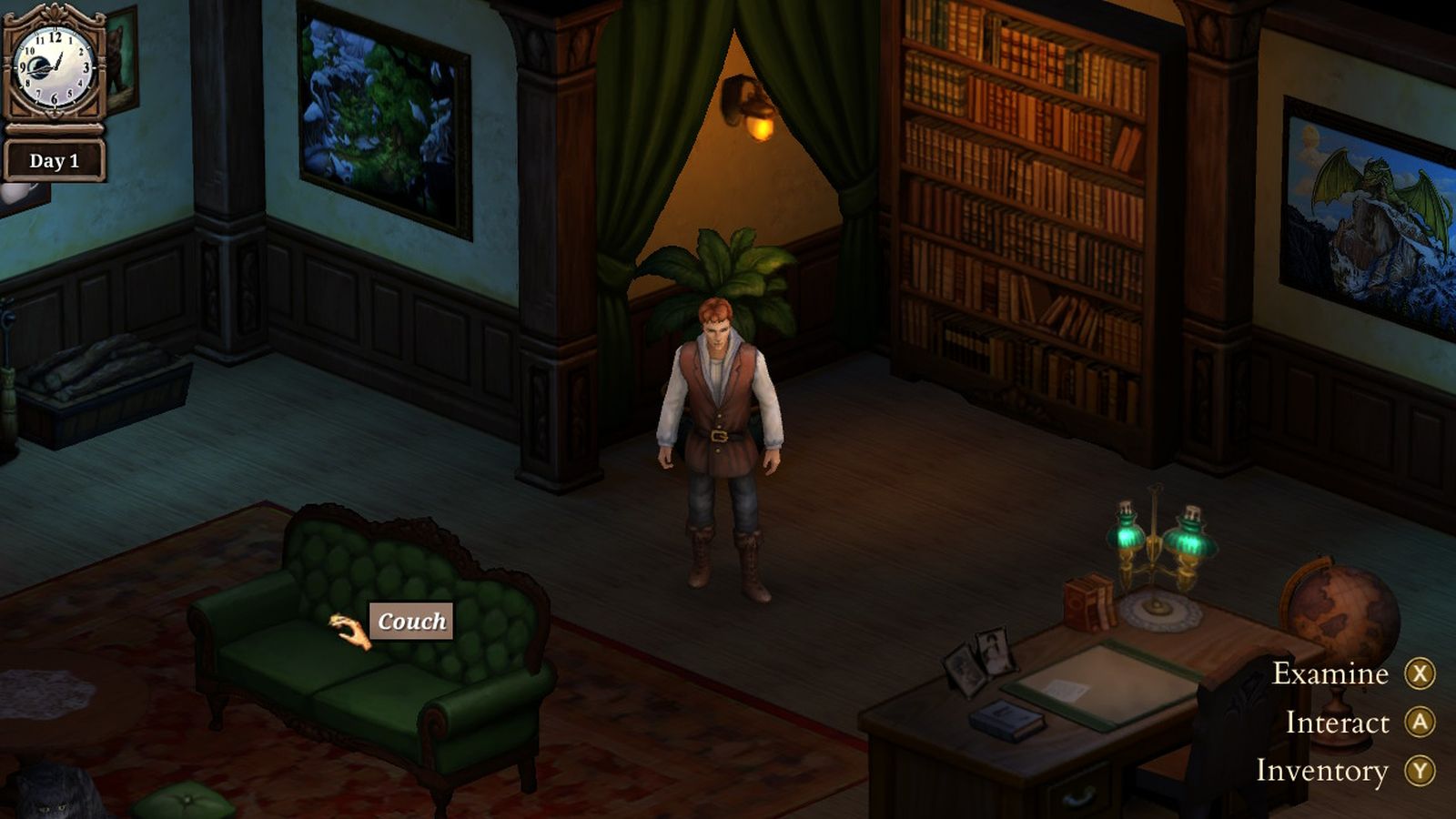 I don’t tend to play a lot of isometric games, but the ones I do I have fallen in love with. I’m not sure why. Isometric RPGs like the Divinity: Original Sin series tend to strike my fancy, but they also have to fall within a certain bracket if I were to truly enjoy them. I suppose I’m very picky; these games have to have an interesting premise with (at least) an interesting story hook or writing. The gameplay, of course, always plays a big part, but I could forgo that if the rest of the game remains unique or fun. And that’s effectively the case with Hero-U: Rogue to Redemption.

Hero-U: Rogue to Redemption follows the story of a would-be thief by the name of Shawn O’Conner, who recently had his plans foiled by a mysterious stranger after being caught rummaging through a home in the town of Calignia. This stranger gives him a Morpheus-esque question; return any stolen property now and embark on an adventure that will see his skills properly put to use, or try to outrun swarming guards and risk jail time. I don’t think I need to tell you what the right answer there is. 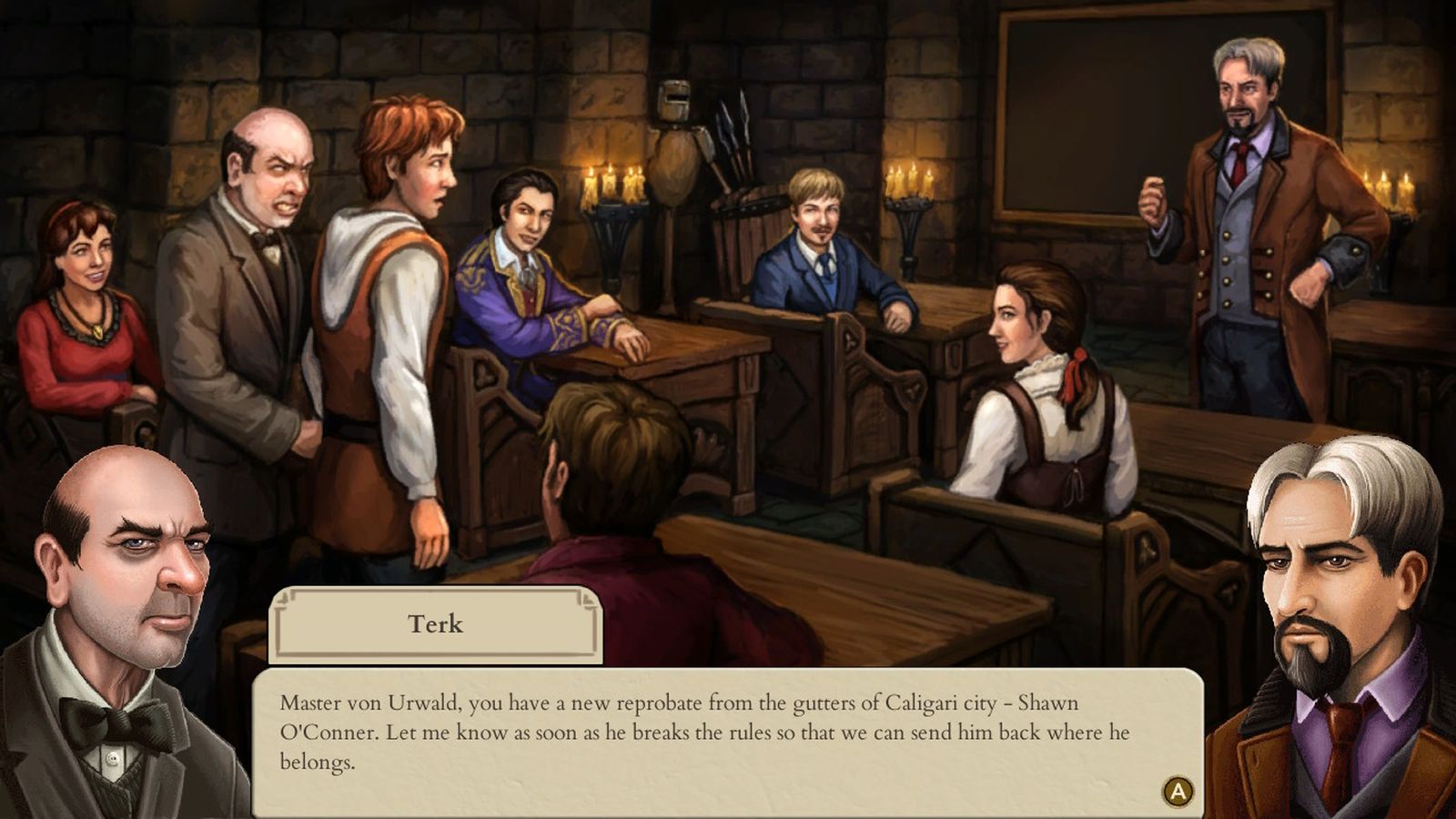 The gameplay is simple; it’s a point and click CRPG. Hero-U: Rogue to Redemption doesn’t make any solid attempts to redefine the genre. But that’s fine because what it does accomplish is worth your time. Although there’s no experience bar to fill up, Shawn can level up his skills by completing certain tasks. Want to level up your climbing skills? Walk a tightrope. Lockpicking? Go lockpick. Stealth? Sneak everywhere (by the way, I really mean that — as a pro-tip try to sneak everywhere because it’s a super easy way to boost your stealth level without having to put excessive work into it later in the game). You can also take extracurricular activities to boost your skills, but you’ll need to sacrifice your post-class time to do that. A lot of the time you’ll be juggling the limited spare hours you have to decide where to spend it, and since activities normally take about an hour to complete you won’t be able to complete a large array. And if you spend your time physically exhausting Shawn, he’ll end up… well… exhausted.

The types of activities Shawn can take part in aren’t limited to physical exercise. Shawn can go dungeon crawling in the depths of Hero U, help out faculty staff, or gamble in the Rec Room. I highly recommend the later; playing an easy card game called Poobah is a great way to make money and it’s a ton of fun (plus, one of the characters, Caesari Sosi, is irritating and it feels good to take his money). There’s a lot to experience, and each activity is just as fun as the other. 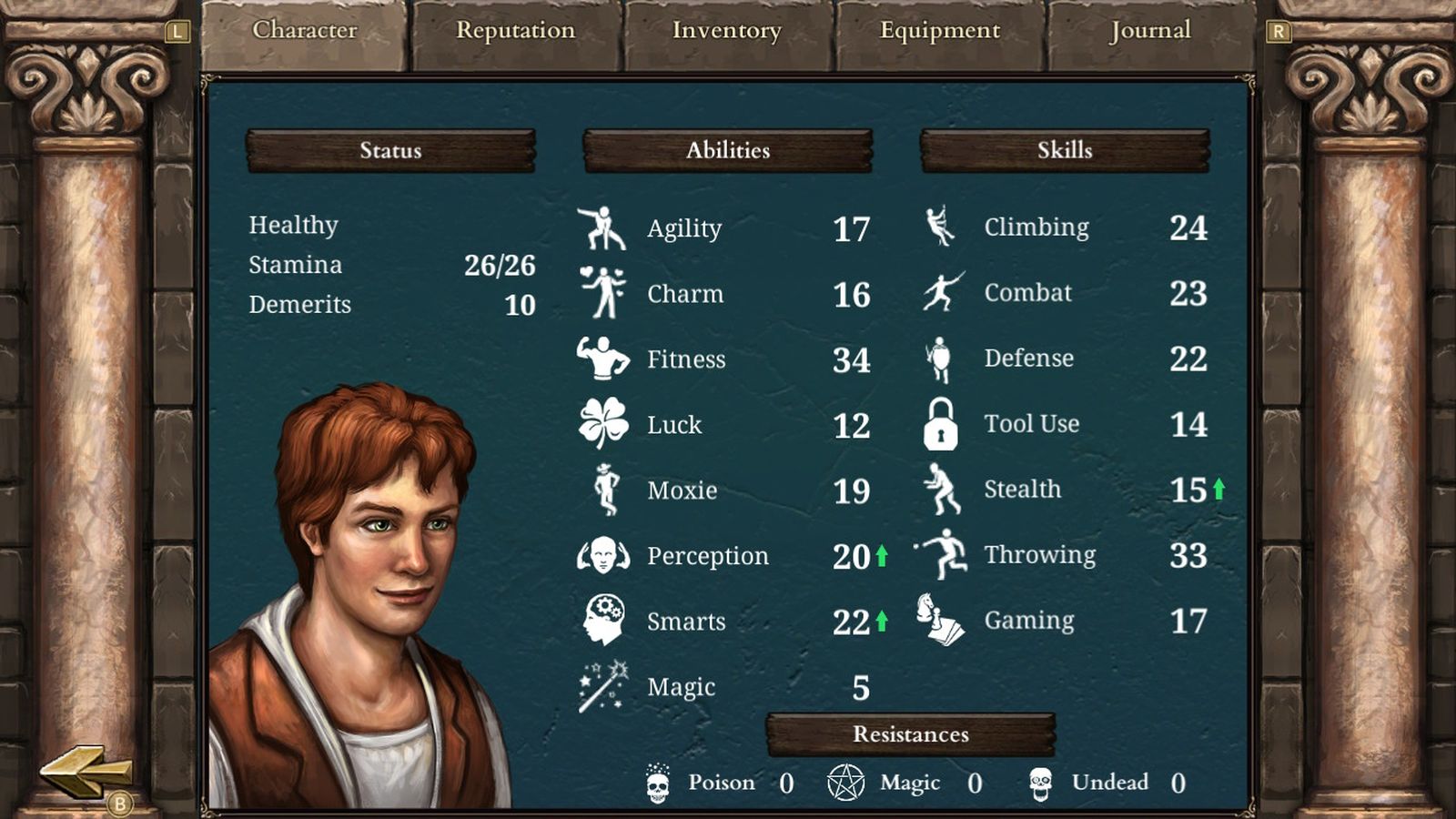 One big thing I love about Hero-U: Rogue to Redemption is how much you’re rewarded for exploring and being curious (basically, being a rogue ahem disbarred bard as the game prefers to call them). It fits the narrative well and does a great job immersing the player in the game. For example, one of Shawn’s first tasks is to acquire himself a pair of lockpicks. Sure, you can do that by helping out the cook in the food hall and cleaning up all the dishes, slowly getting money to purchase them from the shop. Or, you can head to the library, pick up a book on lockpicking, and find a set hidden within the cover. As a further bonus, you’ve also boosted your lockpicking skills because you’ve read about it. It’s a neat little addition to the game that does a great job of immersing you in the moment.

However, if gambling doesn’t pique your interest then you can try your luck obtaining money by clearing out the dungeons underneath Hero-U. Like many isometric titles before it, this game features turn-based gameplay — so there is an element of strategy behind it. Of course, for some, that may get dry quickly. But, as I said before, I loved the Divinity: Original Sin series so that wasn’t much of a problem for me. You have a variety of weapons and tactics at your disposal, such as throwing knives from a distance or sneaking and stabbing up close. If you suffered a horrible fate, you’d find yourself up in the infirmary, so don’t feel like you always have to reload that save file. 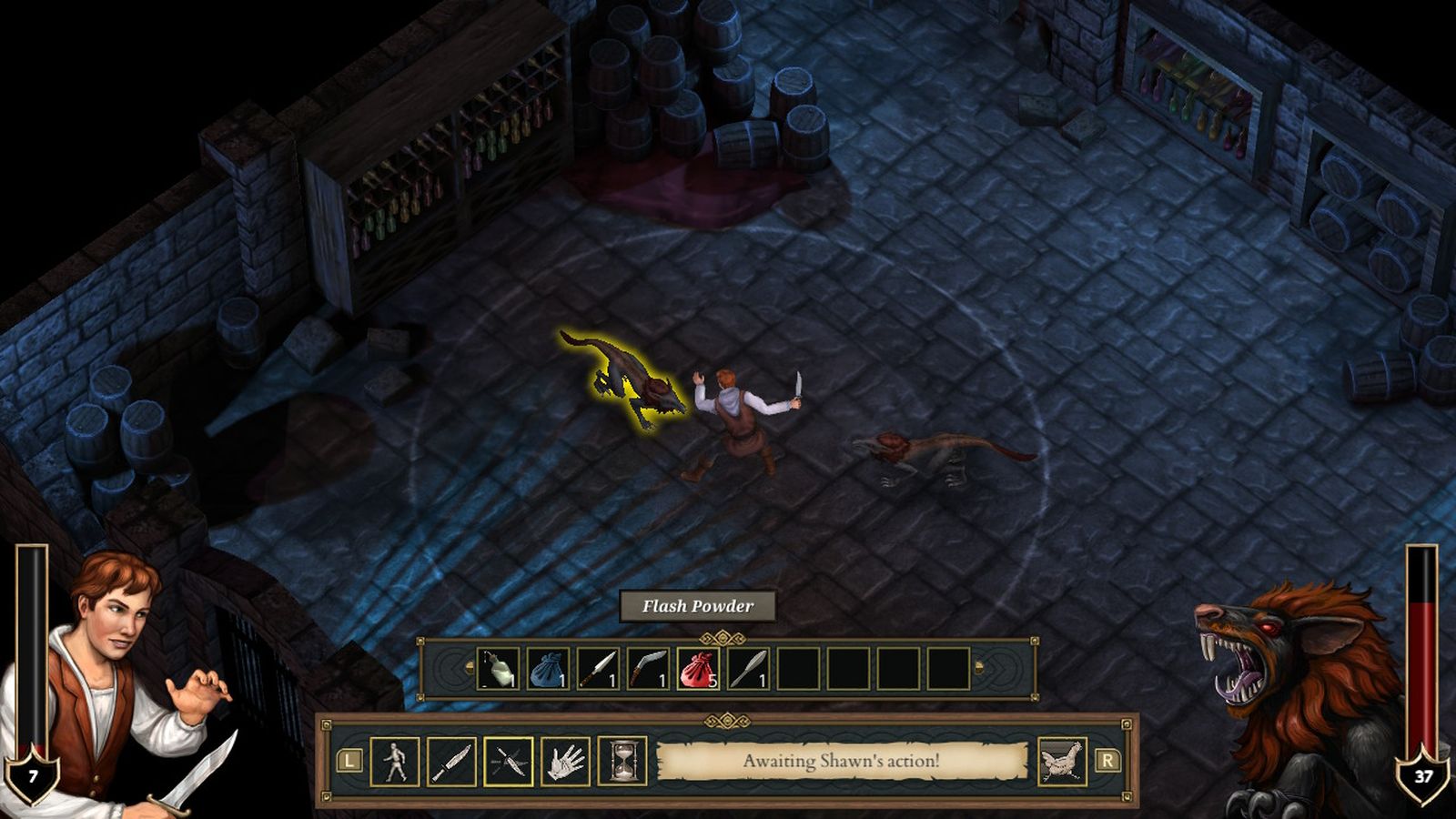 Something I’d like to touch on is the writing, which I normally wouldn’t unless it’s a standout thing; good or bad. As for Hero-U: Rogue to Redemption, it’s the former. The developer, Transolar Games, was founded by the Coles. Who are they you might ask? Well, they’re known for the Quest for Glory series while at Sierra Entertainment (yeah, those Coles). So it makes total sense that the D&D feeling within the game and its writing are fully apparent and that the character development is completely fleshed out. I loved the puns in just about everything that Shawn says, and I loved how quickly I grew to adore some characters but completely despise others. Hero-U: Rogue to Redemption feels real, the characters feel raw, and everything has a level of emotion to it that quickly immersed me and made me feel like I was a part of this world — not just some puppet controlling a video game character. It feels like a D&D adventure, and the best kind too.

However, let’s not forget that this is a title on the Nintendo Switch. After all, how does a point and click game perform on the small portable console? Well, there’s two answers to that question. Let’s first look at it from a docked Nintendo Switch. Using the controller is great when you’re navigating menus or selecting dialogue options, but the moment you’re exploring things get a bit tedious. As there’s no sensitivity option, you’ll find yourself (slowly) fighting to move the cursor against Shawn if you accidentally sent him to move to one side of the screen but need him on the other. As for the portable Switch side of things, it works a lot better. You can use the joy cons to navigate menus but can select where you want Shawn to go by pressing on the screen. The other great thing about playing this game handheld is that there’s not much visual difference between playing this game on a big or little screen (so fret not if you find playing portably will cause you to miss small things while exploring). Given all of that, I’d still recommend getting this on PC if you can as point and click RPGs generally play better with a mouse.

I gotta say, Hero-U: Rogue to Redemption was one title that I’m glad I caught. Even if it did release 2 years ago on Steam and is a title that’s better played on PC, it’s still a ton of fun to play no matter the platform. I’d go so far as to say this would even be a great mobile game, should the developers ever have any interest in making it so.

Hero-U: Rogue to Redemption is fantastic. It’s a highly immersive experience with great writing that will have you fall in love with some characters and hate others, while also giving you the opportunity to live out your rogue fantasies. Every minute is a genuinely fun D&D-esque experience, even when having to study for a test or have the protagonist complete tasks like learning how to lockpick or fight. A definite must-have for any isometric RPG fans.

With a deep interest in writing, Ben followed that into a Journalism degree. As an avid lover for gaming, he is constantly expanding his library with console, PC, and VR games. He's obsessed with stealth games and loves hunting down the smallest of details inserted by devs.
Related Articles: Hero-U: Rogue to Redemption
Share
Tweet
Share
Submit