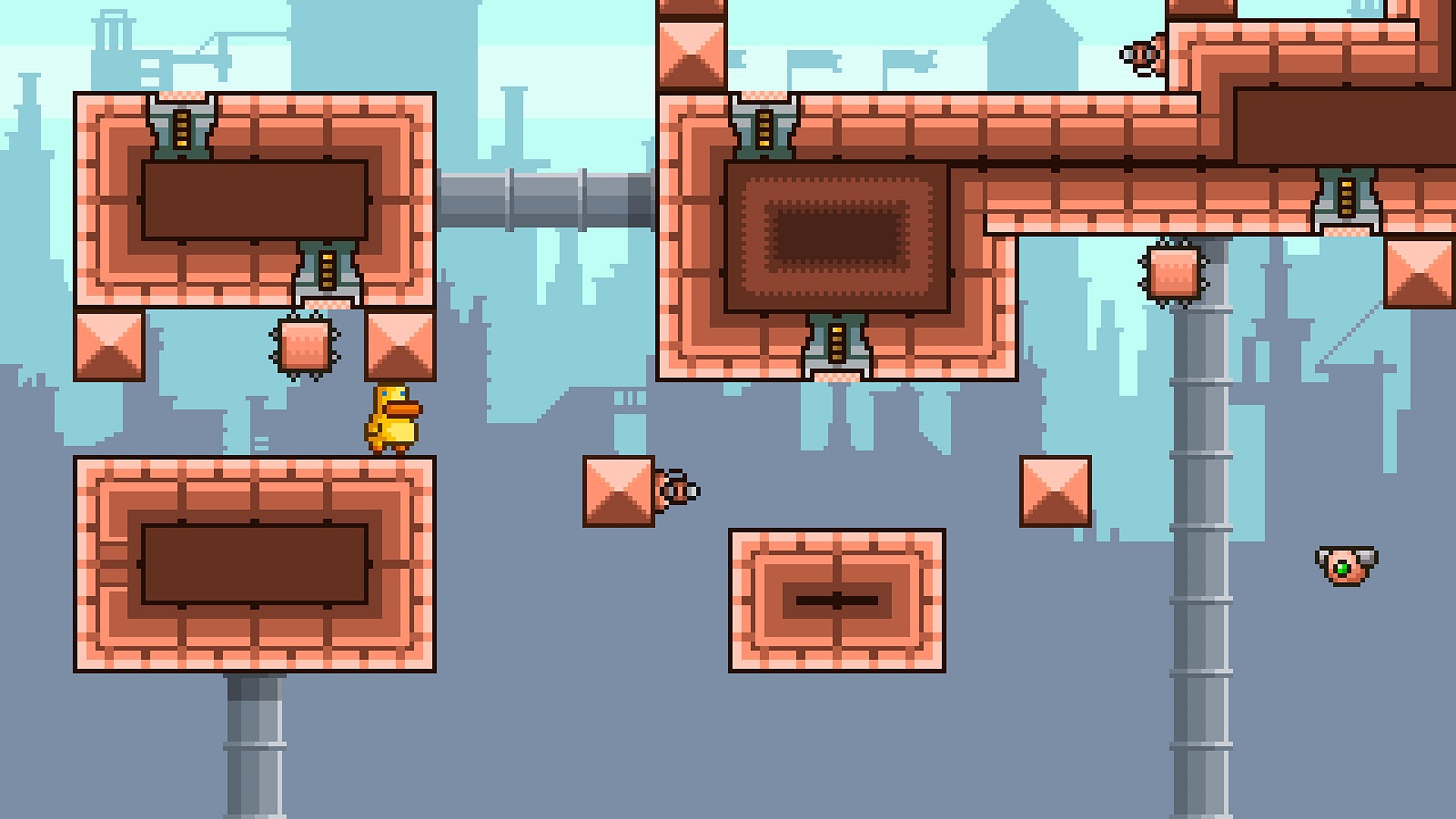 Ratalaika Games titles are for the PlayStation Vita as Just Dance is to the Nintendo Wii: frequent releases that hold the console on life support long after it’s been discontinued. While my last Rataliaka-published title had me running for the hills, Gravity Duck feels a bit different. For one, it passed my “Do I want to play after I get the platinum?” test I administer while playing the publisher’s works. While a middling platformer with a forgettable soundtrack, Gravity Duck still has passable gimmicks and a fun gameplay loop. 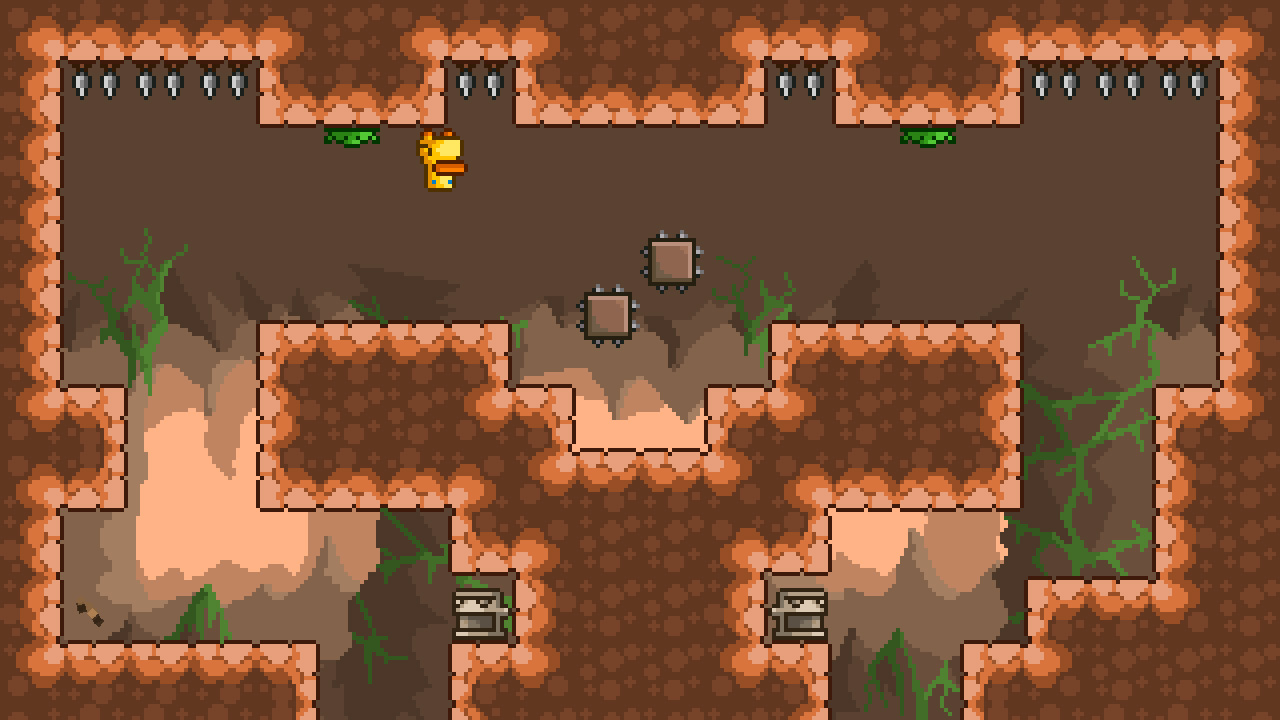 Not one for story, Gravity Duck has you assume the role of a duck that is given the power to manipulate gravity thanks to a greedy Moai that wants golden eggs for breakfast. It’s an excuse plot, but hey, your duck can shift gravity now! You will control him across four worlds and 140 levels as you navigate away from certain doom. Your only method of movement is changing your gravity, which will turn you upside down and head the opposite direction before you hit a piece of land, an enemy, or spike. While you die in one hit, levels have unlimited retries, so you can just get back up again. Each level is short and bite-sized, so this doesn’t feel too annoying.

Coming from the same developers of League of Evil, Gravity Duck feels like a lot of assets have been ripped from the previous game. However, it works for this title, and movement feels fluid and engaging. I didn’t feel bored trying to get my duck across the level, and platforming elements veer towards the “fun” side rather than the “frustrating” one. (Okay, I’m basically dunking on Super Wiloo Demake, but can you blame me?) The music is one serviceable MIDI loop, which isn’t irritatingly grating but also something I’d rather switch off after listening to it for the game’s duration (about a couple hours).

To be completely fair, that’s all there is to Gravity Duck; get your egg and avoid the baddies. However, there’s some entertainment value in the simplicity of the concept, and I quite enjoyed my time with the game, even if it didn’t have much in terms of innovation or staying power. Like most Ratalaika Games titles, this one comes with an easy platinum trophy that can be acquired by World 2. 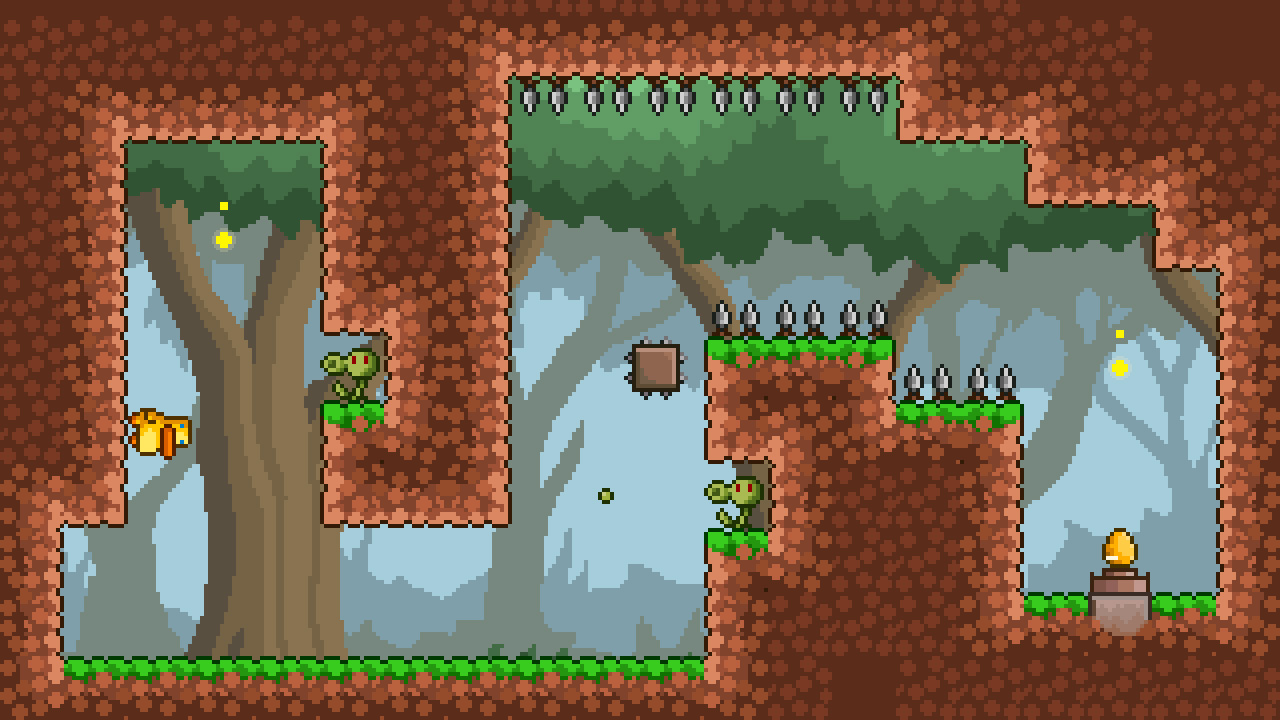 Funnily enough, however, I stayed for the rest of the experience and was pleasantly surprised by some of the trickier level design in the last world. I was rather disappointed that the rest of the game wasn’t as inventive as the last quarter of it (which included some pretty smart timing and positioning puzzles where I had to move my duck just right to change gravity lest I end up being a duck kebab). Enemies were also prevalent enough to be a real threat in levels, and I actually had to change my platforming strategies accordingly just so I wouldn’t have to slam face-first into a butterfly of doom.

All in all, Gravity Duck feels like a short little time waster, and for what it’s worth… it is. However, for a $4.99 platformer that comes with an easy platinum trophy and mechanics that didn’t want me to throw my Vita into the garbage can, I’d say that it’s a serviceable Ratalaika gem. Oh right, it’s also a cross-buy with the PlayStation 4, so feel free to go wild with getting two platinums for the price of one.

For those wanting to kill a couple of hours with 4.99, Gravity Duck is right up your alley. While it doesn’t do much in terms of replay value and it doesn’t get innovative until the end, it’s still worth your time if you want to dust off your Vita.

Elisha Deogracias is an aspiring accountant by day, freelance writer by night. Before writing for Gaming Trend, he had a small gig on the now defunct Examiner. When not being a third wheel with his best friends on dates or yearning for some closure on Pushing Daisies, he's busy catching up on shonen manga and wacky rhythm games. Mains R.O.B. in Smash. Still doesn't know if he's a kid or a squid.
Related Articles: Gravity Duck, Indies
Share
Tweet
Share
Submit