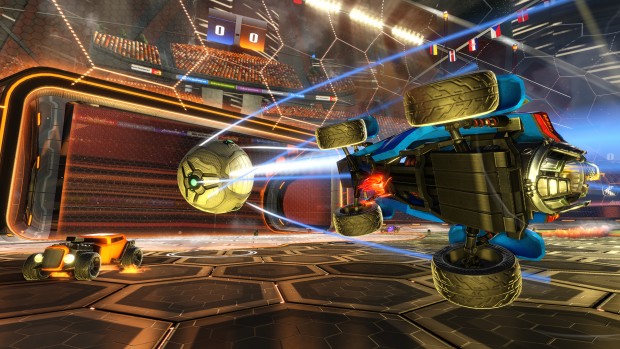 Rocket League is an odd mash-up. In the simplest terms, Rocket League is just soccer played with cars; players drive their customizable vehicles around a playing field in an attempt to knock a giant ball into one of two nets, while offense and defense both play a major role as players try to outmaneuver their opponents, much like a typical sports game. The basic premise is simple, but throw in a strong physics-based engine, rocket boosts, and wild airborne stunts, and things start to become a little zanier. Ultimately it’s neither a sports game nor a racer, but features elements of both genres fused together to create something brand new, and thankfully it works incredibly well. In short, it’s a game that I never knew I wanted but one that I can’t put down.

As a sequel to 2008’s Supersonic Acrobatic Rocket-Powered Battle-Cars, Rocket League places large emphasis on its physics. Knocking the ball around feels smooth, but getting it to go exactly where you want it definitely requires a consideration of speed and trajectory. Mastering these physics demands precision and it’s not always possible with such fast-paced gameplay, but it absolutely creates a frantic and wild experience in its execution.

Adding to the mayhem is the maneuverability of the cars. Driving over gold pods peppered throughout the field fills your boost meter, which can be stored up, providing you with a significant speed boost in moments of need. This quick burst of speed can often be the difference between an extra goal, putting you where you need to be and bowling over other cars. The agile vehicles also provide greater opportunity for strategy, as players will learn to use double-jumps, hand-brake turns and mid-air barrel rolls to get the ball out of their opponents’ control. It all adds to the game’s split-second decision-making and results in a gameplay experience where as many as eight vehicles are all zooming and diving together just to knock the ball in their favor.

The fast-moving gameplay makes multiplayer an absolute blast. Rocket League’s demanding nature creates strong, highly competitive experience that is loaded with tense, hold-your-breath moments. While these moments are really the game’s bread-and-butter, they also help create an element of camaraderie between teammates as they work together somewhat strategically to shift the ball in their favor. Even when playing with or against a team of PC players through Rocket League’s cross-platform play, I found that my teams often stuck together, with teammates always providing backup during crucial moments.

Unfortunately, the same cannot be said for Rocket League’s AI teammates. When playing the offline Exhibition or Season Play modes, players have the option of choosing their teammates. While choosing to play in a 3v3 mode retains more of Rocket League’s exhilarating moments in comparison to the less busy 1v1 mode, my CPU teammates often felt lacking. Even on some of the game’s harder difficulties, I found myself frequently at odds with my team as it was not uncommon to find an AI teammate who worked oppositely of what you were trying to achieve. Encountering instances where a teammate knocks the ball from your control only to head in the wrong direction was all too common and really made the single-player content pale in comparison to the synergy found when playing online.

One of the things that really keeps you coming back to Rocket League is how frequently it chooses to reward you. Every single match that you play, regardless of victory or game mode, comes with a prize. These rewards are random and purely aesthetic – a new paint style or new set of wheels, for example — but the rate at which they are given provides a satisfaction that you’re always earning. It makes it feel like you’re constantly accomplishing something, even through defeat.

As rewarding as these prizes are, though, they don’t actually serve to further Rocket League’s gameplay. In fact, as addictiveas the game is, players will find that every match that they play has the same core gameplay each time. Players can set parameters such as difficulty and team count, but ultimately every game mode in Rocket League is identical. Exhibition, Season Play, and online mode all play host to the same game mode, and even the customizations of player vehicles are only in appearance, rather than modifying any attributes. This one-size-fits-all approach gives all vehicles a level playing field, something that Rocket League’s approachability ultimately benefits from, but leaves the game with a noticeable lack of variety.

Rocket League is a highly competitive game that really boils down to a single gameplay experience. At its core it really is just a fleshed out minigame. That said, Rocket League is the kind of game that is so fast-paced, approachable and addicting that its lack of variety is excusable if only for the fact that the plentiful nail-biting moments never seem to grow stale. Frantic, exhilarating, and constantly rewarding, Rocket League is one of PS4’s best multiplayer experiences to date.

Rocket League may only feel like a glorified minigame, but its wild, tense, and fast-paced gameplay makes it one of PS4’s best multiplayer experiences to date.

Gaming Trend's resident amiibo collector, Matt's a lifelong gamer with a soft spot for Nintendo. As a new father, Matt often struggles to stay as involved as he has been in years past but can always be counted on to come back for some engaging geeky conversations. A resident of Philadelphia, he is currently working on building up his Man Cave with all things Marvel, Star Wars, and Video Games. As an old-school gamer, Matt firmly stands by his belief that gameplay will always be more appealing than story.
Related Articles: Rocket League
Share
Tweet
Share
Submit