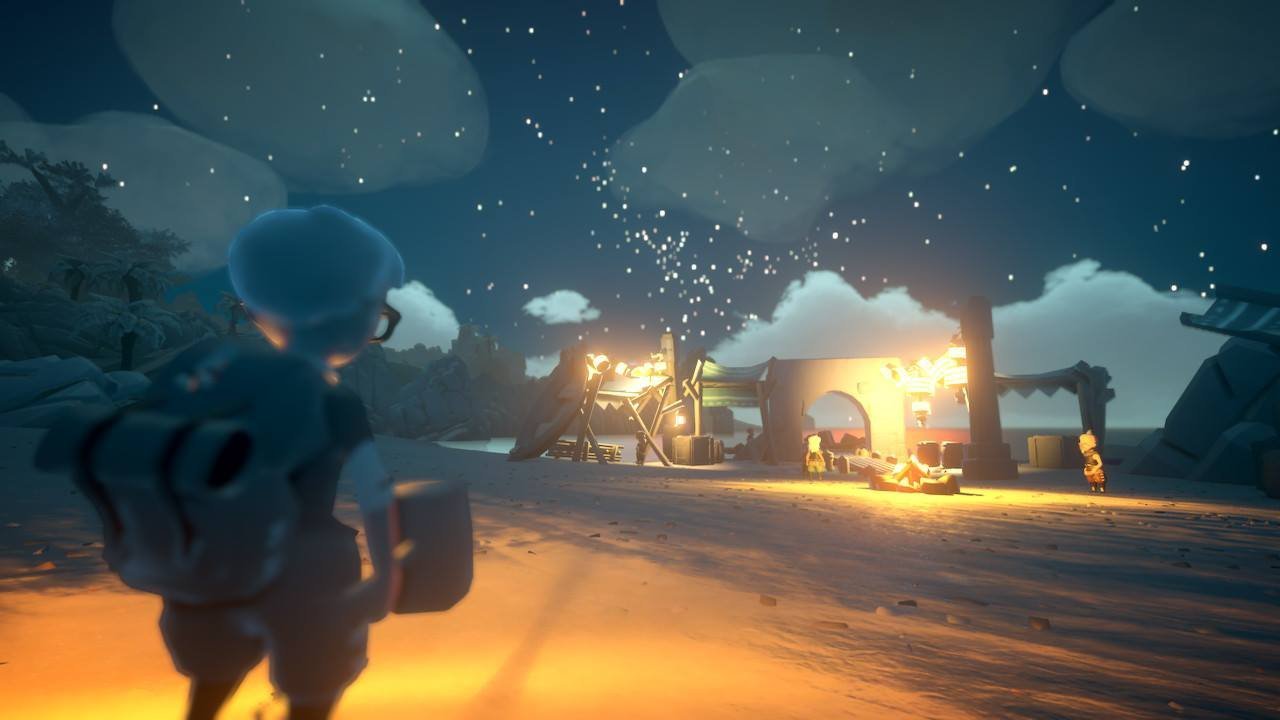 It’s been years since I’ve sat down on the ground and played with plastic toys; now my plastic toys live on shelves or in a box in the garage, but Yonder: The Cloud Catcher Chronicles made me pine for a time when I could just sit down and make my own fun. It has a presentation and setting that are clearly built for a younger audience while offering enough depth in its mechanics to offer gameplay systems that are rewarding for the child-at-heart. It can be a little too dry at times, but its childlike sense of wonder can go a long way in endearing the game to the player.

You play as a child on a quest to discover the mystery surrounding their homeland. It was poisoned, they were shipped away, and the game opens with your adorable, created character on a voyage to return to the ancient island of Gemea that holds the answers. The core of the story progression revolves around finding sprites hiding all over the island that allow you to clear the Murk tainting the island and blocking progression or secrets. The story, much like the presentation, is smooth and without many dark corners, that adds to the game’s overall charm and whimsy.

The most surprising thing about playing Yonder was not in the cohesiveness of its aesthetic, but in the robust crafting system and trading economy present in Gemea. Most of your time in Yonder will be spent doing quests for the various inhabitants of the island. Those quests can involve simple objectives, but often task you with providing specific items to appease these needy island denizens. You can then find those items in one of three ways: You can find some items out in the world, you can get them from traders, or you can craft them.

It’s not always thrilling or worthwhile, but the simplicity with which the developers at Prideful Sloth present the complex systems they built is impressive. You’ll pick up simple items like rocks, sticks, or flowers as you explore, which then factor into crafting better and better items. Those items require a recipe that you’ll earn from entering one of the seven guilds (Chef, Carpenter, Tinkerer, etc.). You complete tasks for the head of a guild, becoming a novice. After crafting enough items in that field you’ll become a master and earn even more complex recipes.

You can often find many of those more complex items from traders. They’re traders because the game does not have vendors in the traditional sense. Everything they have available has a value attached to it that you can only purchase by offering up items that are worth an equivalent amount. You can’t sell your stuff and just use the money to purchase goods (Although you do find a rare currency that some traders will exchange for cosmetic items). Additionally, all of the goods’ values are dependent on the item and location. If you’re in the town full of chefs then they’ll have plenty of food items for trade which means your various food items will be worth less to them in a trade. It’s a great system that lends a certain worldly quality to the otherwise cute and playful island. It was intuitive enough that I knew if I needed wooden items that I needed to go to where the carpenters guild was, for example.

The crafting often ended up being a bit of a chore in spite of its impressive nature though. In several cases I needed to craft five or six of a specific item which involved me then crafting dozens of other lesser items and having hundreds of rocks or wood. If you want to build those items, it means you’re going to be constantly collecting rocks or having to regularly check-in with specific vendors to see if they’ve replenished their stock of items. It very quickly becomes tiresome.

You also build farms all over the island that you can equip with stables for the island’s many fantastical critters and decorate however you see fit. You’ll then want to assign nearly any of the game’s NPCs as a farmhand to keep the animal waste in control. Depending on the animal, they’ll occasionally produce different items for you to collect. The cow-like groffles will give you milk, and the flower-covered sprig-pigs will provide flowers. It’s a neat system that ultimately felt underutilized as I almost never felt any compelling reason to engage with the farming. The items you got were not necessarily worth the time to build a stable, lure the animal to the farm, and then regularly return to collect them. They also weren’t big or interesting enough to be worth decorating. The farms’ most useful function was that they served as a fast-travel point.

Travel in Yonder can be the game’s most frustrating mechanic. You can craft a consumable talisman that lets you travel between the farms that you’ve unlocked, and there are large Sage Stones that you can unlock with quests that let you travel between any stone you’ve found. While the talisman is an item you can use wherever you are, the stones require that you physically walk to the nearest stone, walk in its mouth, which takes you to a hub of all the possible stones on the island, and then walk through the stone in that hub that will take you where you’re going. Aside from the annoyance of having to trek to the stone to fast-travel in the first place, none of the stones in that hub are labeled. They simply have different environments surrounding them meant to indicate which part of the island it will take you to. In practice, I found myself walking in and out of them in a terrible trial-and-error process until I came out in the correct place. It was just needlessly irritating.

As difficult as navigating the island could be, Yonder was such a pleasant experience overall that I tended to not mind just running around and seeing the world as night fell or as a light snow would fall in winter. The simple musical tracks would be sprinkled in among the sound of local fauna that together added to a magical feeling of being a kid on an island full of adventure. It wasn’t until near the end of my time with the game, when I had explored all of the island, that the magic started to fade and the limitations of travel started to annoy more than endear.

With this new Switch release there is nothing new added to the game from the original PS4 and PC releases with the exception of the ability to play it in handheld mode. That simple addition made the game more worthwhile than those other versions for me (unless you insist on having trophies or achievements) because the game’s playful art style perfectly translates from the big screen to the small one. If you played this on those other platforms in 2017 then this simply does not provide enough of a reason to dive back in. For any Switch owner that missed it, Yonder is a pleasant and entirely whimsical affair that might be worth a look.

There are enough small grievances I have with the game that hold it back from being truly great, but the tone and setting are so charming that it’s hard to be too mad at it. If you want to do some peaceful meandering during your commute, the Switch version is easy to recommend.

Nathan lives in Colorado catching Pokemon on the Go and at home. He previously spent three months interning for Game Informer before coming back to Gaming Trend to spread the good word on video games. His real passion, though, is collecting different versions of the 3DS and other weird Nintendo garbage. It's a never-ending quest for less space in his house.
Related Articles: Yonder: The Cloud Catcher Chronicles
Share
Tweet
Share
Submit