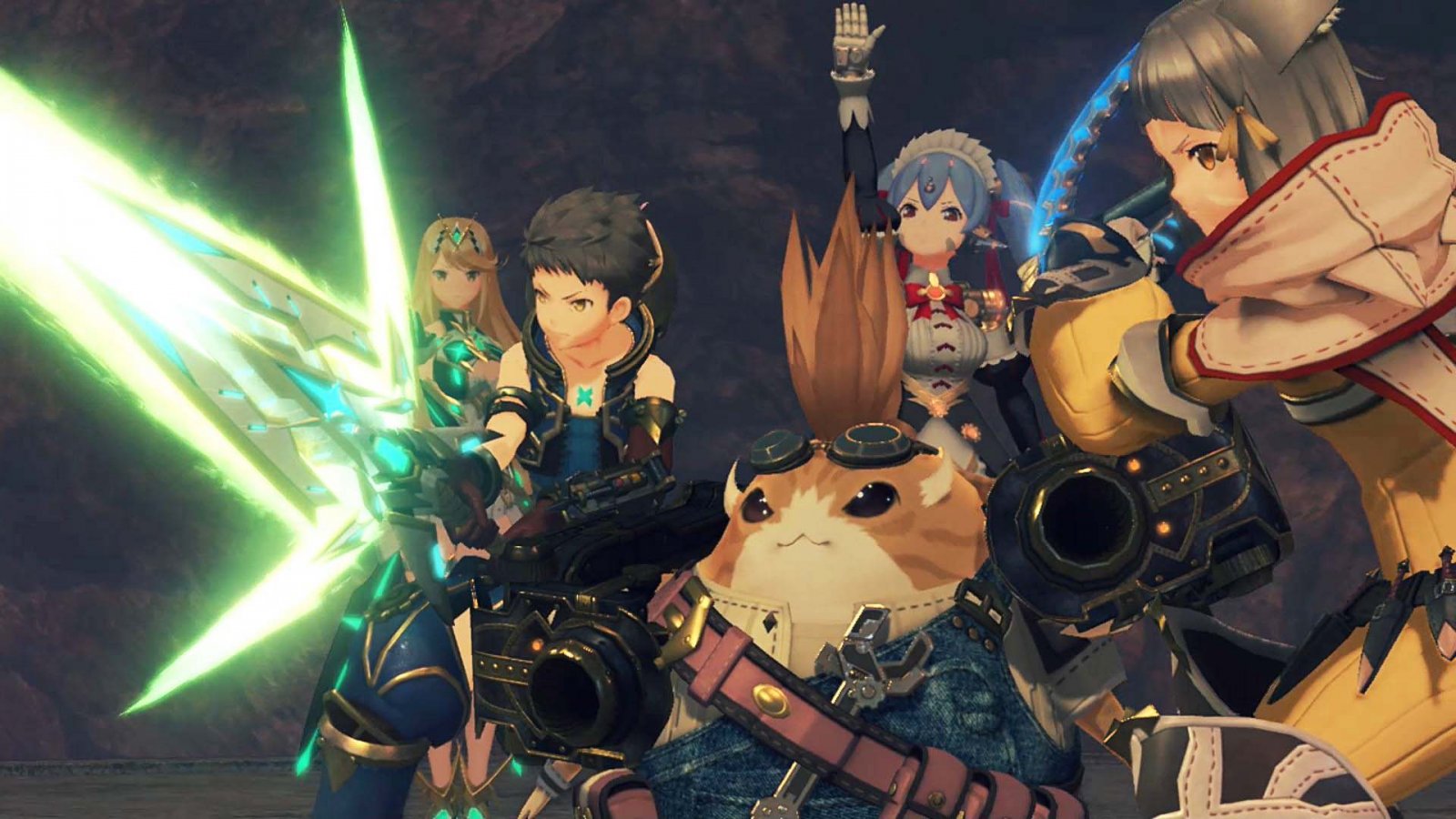 A cut above the rest — Xenoblade Chronicles 2 review

Picture, if you will, a GameStop branch in the summer of 2012. Business is slow, as it’s the dead season for game releases, and a bored employee sits behind the counter as 2 high-school students browse the selection. Happening upon a lone copy of a Wii game he’d not heard of, one of them asks the clerk — “Hey, you know anything about Xenoblade Chronicles?” “I’ve heard nothing but good things,” the employee replied, “but I haven’t gotten around to it myself. Why don’t you check it out for me and let me know?” And with that, I’d picked up what would become one of my favorite RPGs of all time. The rich and developed story, the sprawling landscapes and environments, deep combat system and excellent soundtrack easily places this in one of my (and many others’) top RPG spots. Now, 5 years later, the sequel has finally arrived, but how does is stack up against its predecessor?

Let’s start with the story. Though the two titles may be connected in name, their narratives aren’t nearly as intertwined as a direct sequel would imply. Brand new characters and worlds take the stage now, for better worse. Our story focuses on a young man names Rex, making his living on the back of a giant beast known as a Titan. While this may sound a bit similar to Shulk for those who have played the first Xenoblade Chronicles, this is no Bionis. This Titan is not an immobile continent; rather, it is a being who is quite awake. While it may be giant, it’s a relatively small creature compared to the other Titans that inhabit the world; hardly big enough for a house and a few supplies on his back. Affectionately referred to as Gramps by Rex, the two make their living by salvaging. On the bottom of the Cloud Sea, relics of the past lie just ripe for the taking, and Rex excels at bringing these treasures up to the surface. In fact, our story starts in the midst of one of these missions — but it turns out a cranky crustacean hitched a ride back up with the young salvager. This leads to a battle for his breakfast — quite literally — and serves to tie in the game’s first combat tutorial. While not a difficult fight by any stretch, it’s an excellent way to weave gameplay and story together. After the tussle — and the ensuing meal — Rex and Gramps head to the trade guild to turn in their haul.

You’ll make unlikely friends and even more unlikely foes along your journey.

Arriving at Argentum (a bustling trade center on a much larger Titan), Rex makes his way to the exchange to pawn off his salvage and send some money back to his home — and it’s here that the game teaches the player about shops and NPC interaction. Once I made my way through the tutorials, however, I was greeted with a job from the leader of the trade guild, Chairman Bana — a savvy Nopon businessman. The task seems simple — a salvaging job, right up Rex’s alley. The reward: 100,000 gold. This being more money than Rex has ever seen in his life, he blindly accepts, though his gramps isn’t keen on the idea in the slightest. Also coming along on the job are three Drivers — mercenaries who fight alongside living weapons known as Blades. Among them are Nia, a young girl with a tiger Blade named Dromarch; Malos, a confident man with vicious blade named Sever; and Jin, a mysterious masked man who doesn’t seem to be a Driver at all — choosing to fight with just a sword. Over the course of the mission, Rex discovers that they’ve been sent to recover a special Blade — the Aegis. The sword itself is reminiscent of the Monado from the first game, but with the added persona of a young (looking) woman named Pyra. One sudden but inevitable betrayal later finds Rex and Pyra bound to each other and stranded on the Gormott Titan. From here, the game really opens up — Gormott Plain is basically Gaur Plains from the first game, with all the freedom of exploration, rolling green hills, and orchestral swells to match. Though it might be a bit cliche to have what’s basically a carbon copy of the first game’s most iconic area, I couldn’t help smiling as the greenery stretched out before me.

There’s a sense of wonder and excitement that even comes from just walking across the game’s expansive landscapes.

Speaking of the music, it’s excellent! One of my favorite parts of the game thus far has been hearing the compositions. The main battle theme is exciting and gets me pumped to go into every fight, the sense of adventure that Gormott Plains exudes gets me ready to explore, and the theme for Torigoth, the town on Gormott, was both relaxing and upbeat — perfect for spending time shopping and taking a break from the perils of fighting monsters and Drivers. The Kingdom of Uraya — specifically, the stomach area — has an especially beautiful and evocative score, with the soft choir and orchestral movements creating a serene soundscape that reminds me of Satorl Marsh’s nighttime track from the first game.

You’ll face all sorts of strange creatures as you travel across the Titans of Alrest.

Stranded on an unfamiliar Titan with no way to leave, the only thing to do is to move forward…according to the story. However, the fast travel is still available in the menu, so I could head back to Argentum any time I wanted (even though logically it should be impossible for me to do so). I understand leaving a way for players to stock up on supplies, but part of me wishes that I wasn’t able to just come and go freely — it broke the immersion of the situation a bit too much. Especially egregious was a moment when our heroes were inside of a Titan with no way out and I still had the ability to come and go as I pleased. Maybe I’m just old-fashioned, but things don’t always have to be instant gratification — even if it is more convenient.

One of the main draws of the game for me so far has been collecting different Blades — it’s common for a Driver to have more than one Blade bound to them in order to grant them more options in combat. In the previous entry, each character had 9 Arts to use at a time during battle, creating diverse strategies and distinct combat styles for each hero. In Xenoblade Chronicles 2, however, there are only 3 Arts and one Special available during combat. Though this seemed like it oversimplified things at first, I realized quickly that it was done to encourage switching Blades to find the combat style that you enjoyed most. Pyra and the Aegis hit hard, but are quite slow, whereas other Blades may lend better to getting into quick hits or healing party members. Tora, a Nopon who joins your party, takes on the role of tank, soaking up damage and drawing aggro from enemies — however, Rex can take on this role himself as well. The flexibility that this allows makes the combat feel much more robust than the first game, and allows for a more tailor-made fighting experience.

The experience isn’t perfect. While I wholly enjoyed the over-the-top English accents of Shulk and friends, Rex and Nia’s Scottish caricatures can be quite grating at times — one of the only downsides to having the game early is that the Japanese voice acting DLC wasn’t available yet, so I had to deal with the main characters’ less-than-stellar performances. Pyra’s voice actress, however, is spectacular, and made things slightly more bearable. The narrative itself is much more reminiscent of an anime this time as well when compared to the more mature themes of Xenoblade Chronicles. This isn’t inherently a bad thing, and don’t get me wrong, I love anime, but when I compare the two stories, I definitely preferred the first game’s. Shulk felt like a much more grounded protagonist, whereas Rex’s brash hot-headedness and overconfidence is sometimes frustrating to witness. Even the design of the characters feels less mature — the larger eyes especially, while not inherently a negative feature, make the characters feel far less adult. The game also has several moments of over the top reactions popular in anime, and with the English voice acting it’s almost awkward to watch at times.

Chain Attacks are back again, and just as cool as ever.

While the flexibility of the combat is a welcome addition, in the end if felt less focused, and made the characters feel less unique in their playstyles. In the first game, each character felt special and distinct to play as; Shulk, Reyn, Dunban, Melia, Riki, Sharla and Fiora were all different, and taking a break from one to play as another was an excellent way to mix up the combat and make it more interesting. In 2, however, switching Nia from a healer to an attacker or tank, while convenient and encouraging experimentation, makes her feel less special with her abilities when Rex can do the same thing she can with another Blade. The way affinity with other characters works this time around feels lackluster as well — instead of each NPC’s story being interwoven with both other NPCs and the main characters’ alike, only the Drivers and Blades grow closer as the story progresses — whereas interacting with side stories has taken a backseat entirely. The side quests were some of my favorite parts of Xenoblade Chronicles, but doing them in 2 feels like it’s more out of obligation than enjoyment.

The framerate stutters at times, and the graphics, while impressive, aren’t something really breathtaking like Mario Odyssey or Breath of the Wild. Though this is expected with such sprawling environments, it still feels like the developers could’ve optimized the experience further, especially when compared to the aforementioned titles. That said, the game is nowhere near unplayable or unenjoyable, and it’s definitely still impressive in its scale and its style.

A cut above the rest — Xenoblade Chronicles 2 review

While it’s definitely got its flaws, and it doesn’t quite reach the same exceptional standards as its predecessor, Xenoblade Chronicles 2 is definitely worth playing. With robust, customizable combat, fun characters and an interesting story, and huge environments to explore, it’s one of the best games on the Switch and an excellent RPG.

Noah McGuire is a senior at the University of Michigan - Dearborn, currently studying Journalism and Screen Studies, with a minor in Game Design. His earliest memories of gaming com from the family sitting around the TV watching his father play Donkey Kong 64, and he one days hopes to be a part of making games that provide more people with those fond memories. An avid Legend of Zelda, Overwatch, and Dark Souls fanatic, along with enjoying weekly sessions of Dungeons and Dragons and the occasional game of Twilight Imperium, he'll always shoot straight on his opinions -- even if it'll land a bullseye on the "incredibly blunt" target.
Related Articles: Xenoblade Chronicles 2
Share
Tweet
Share
Submit