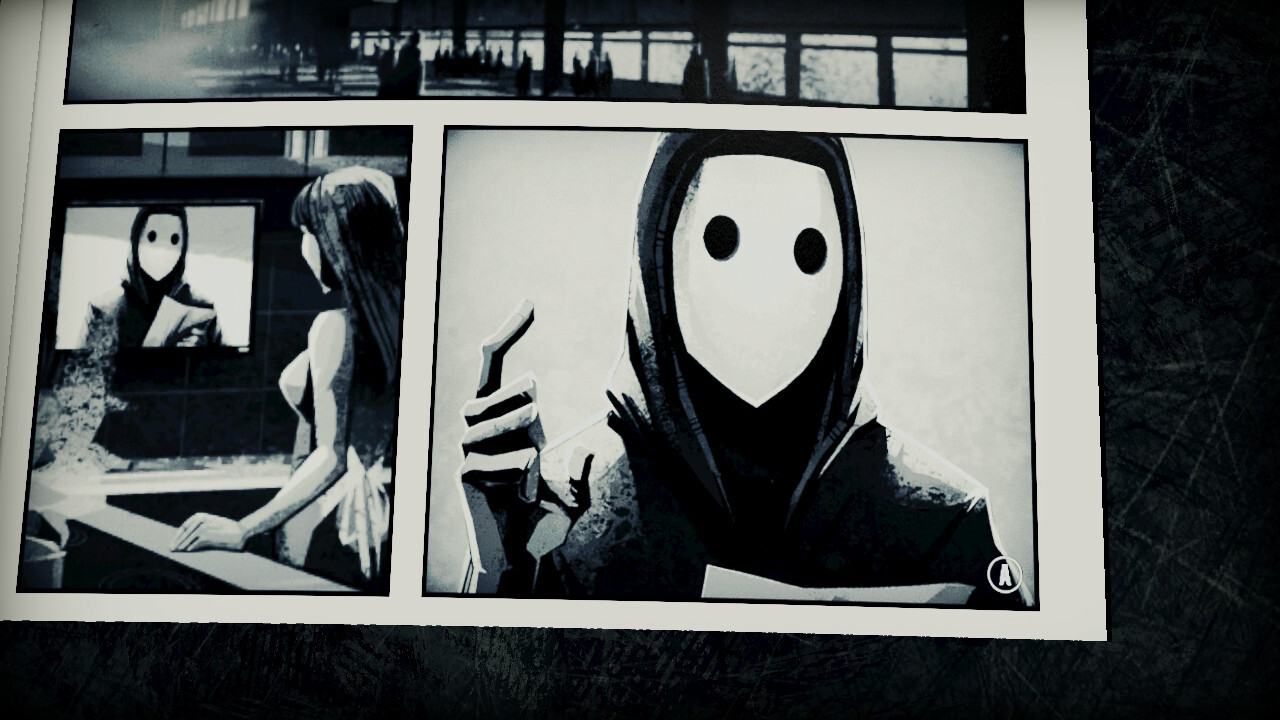 As a huge fan of comic books, being able to play within one is one of the coolest things ever. We’ve had titles replicate the look of a comic book using a cel-shaded art style, and you can see this in games like The Walking Dead. Yet, that’s as far as TWD will go with it. Then you’ve got the VR title Lies Beneath, which goes one step further and has you read a comic book during the beginning of each chapter to set up the overall story. Liberated instead takes it a whole leap further, and has you play as the protagonist in the comic book itself. That’s pretty cool. However, you’ll soon realise that this game doesn’t run any deeper than that, and unfortunately, this might be the only gimmick to keep players interested. 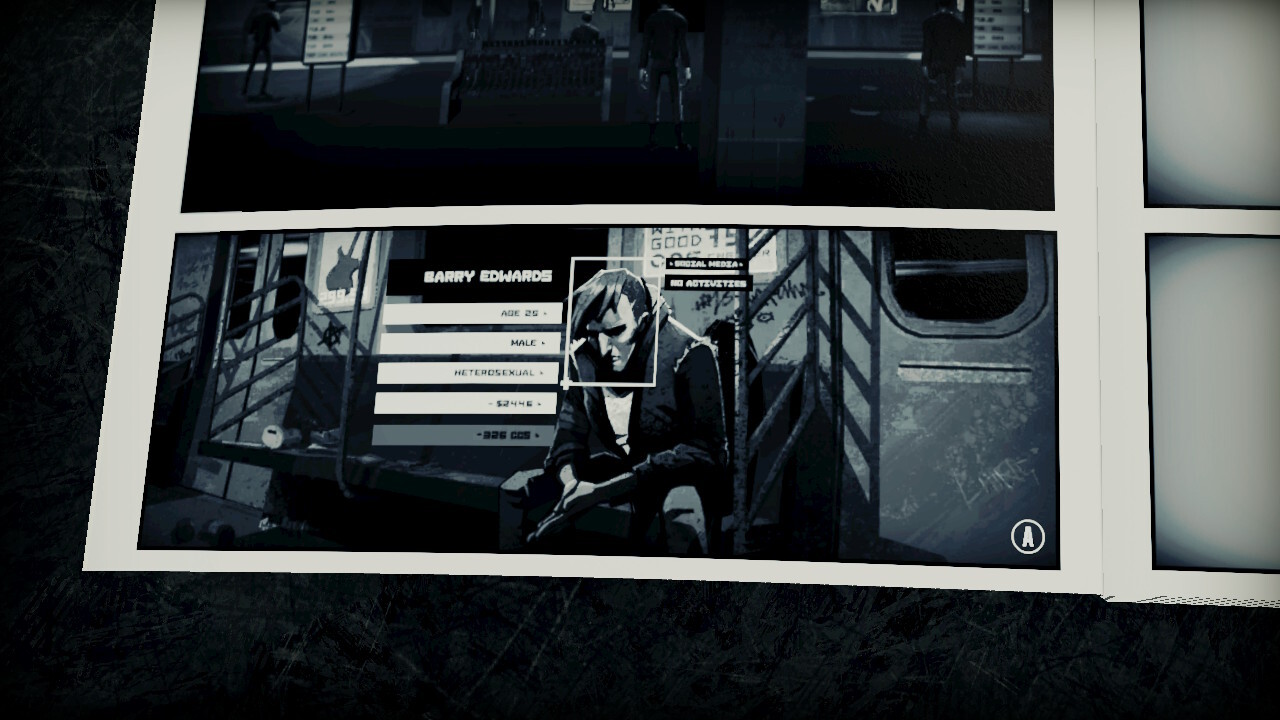 The story is heavily cliche, and draws a lot from other dystopian media such as Mr Robot (mostly taking inspiration from the idea of the masses standing up to the oppressive) or the Black Mirror episode “Nosedive.” But, I’ll explain all these similarities shortly – firstly, I’ll explain the story. It’s the year 2024, and the world is living in a “utopia.” You’re required to post to social media, hang out with friends, and overall keep a positive digital footprint. There’s no such thing as privacy since every little aspect of your life is scrutinized. You’re either being recorded via CCTV, your phone, smart home products, you name it, and it’s all getting funnelled into Thermis. Thermis is the program that works within and alongside the CCS, or Citizen Credit System. Much like movies such as Minority Report, the CCS will predetermine any and all criminal activity prior to it occurring and forward it to the local police. Crime doesn’t exist for this reason, but that doesn’t mean it’s perfect – the global population is so used to this level of harassment that there’s been no change in the system. 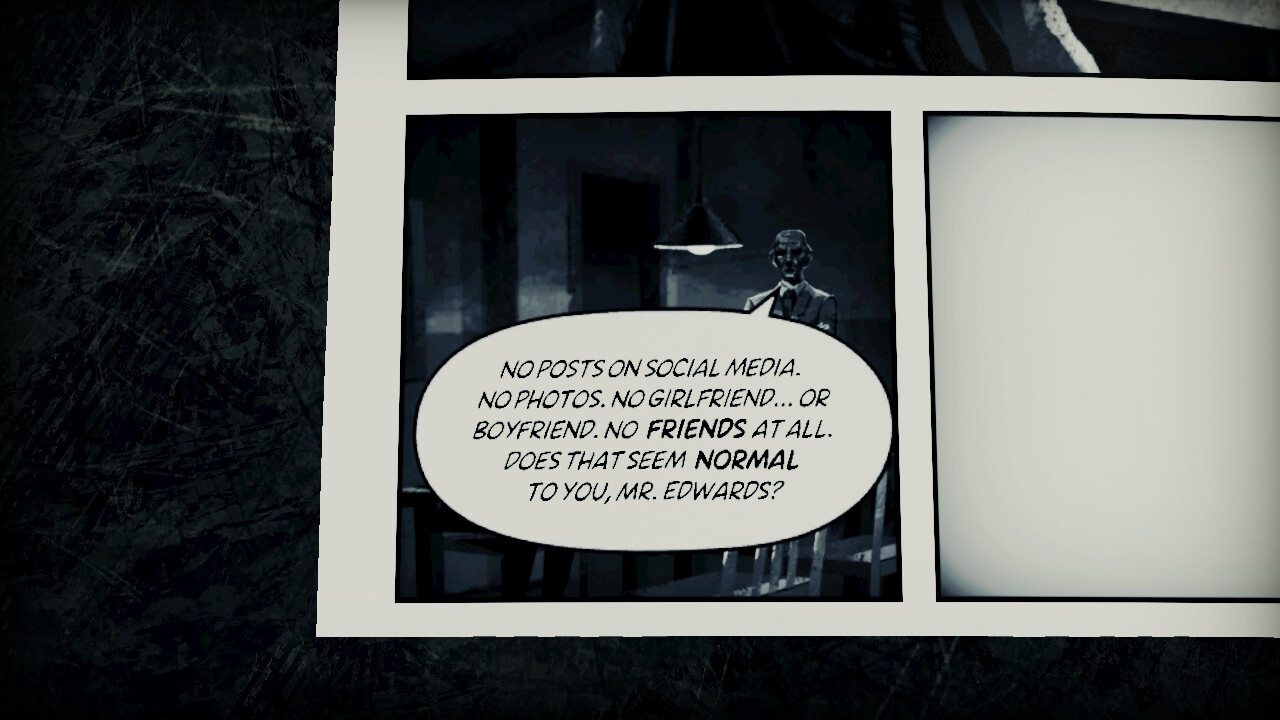 I mean, is it really that weird to be inactive on social media?

However, a rebel group called the Liberated have decided to be the change that the world needs, and you’ll play from the perspective of a prospective member for this group. That’s the rundown without any spoilers, but as you can already see there’s plenty of cliches and “inspiration” drawn from other dystopian media. As you’ve likely put two and two together, the CCS system is strangely similar to Black Mirror’s “Nosedive” episode. Much like in that episode, if a citizen doesn’t keep up their digital social life or doesn’t make clear that they’re happy and an overall upstanding citizen, the system lowers their score. Unlike that episode, however, if your score gets too low you’ll likely be arrested. 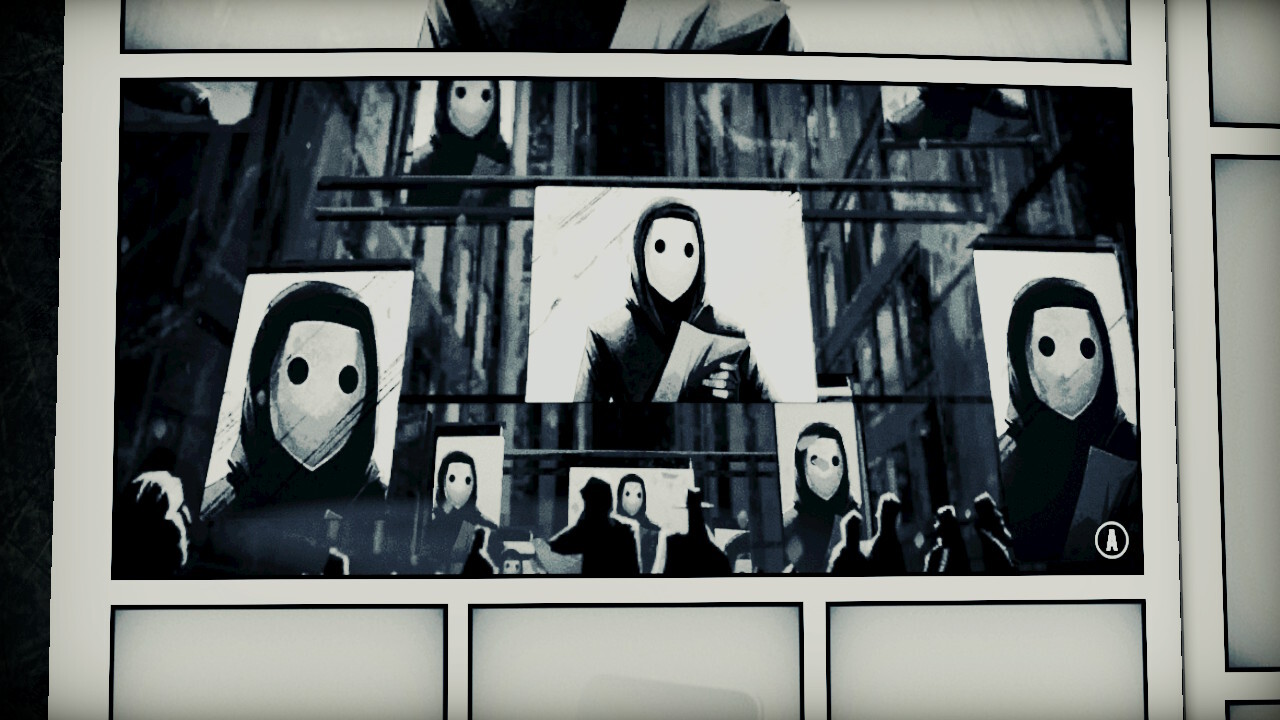 Much like most dystopian fiction, and just like in Mr Robot, the masses are inspired to stand up and take control of their lives once more. There’s one scene in the game that feels like a complete rip of a Mr Robot scene, and that’s when the Liberated hack multiple displays around various cities and replace it with a prerecorded video of them imploring the masses to take control. In terms of the game’s inspiration of dystopian fiction, it feels a lot more uninspired and a rehash of unique ideas that the overall story feels like a low-quality young adult novel. And I don’t want to be too harsh since dystopian fiction is my favorite story genre, but in reality, this title effectively has taken the biggest cliches and put them together.

While Liberated has most of its claws in dystopian fiction, and normally that’s something that would keep some players interested in this game (if playing inside a comic book doesn’t entertain you), then the gameplay should be strong enough to keep everyone else entertained right? Well, it seems like the developer Atomic Wolf didn’t think so. In short, it’s boring. Take the gunplay for example. If you’ve ever played 2D run and gun games, either indie or as a web flash game, where you have a line pointing out of your gun and can run, point, and shoot, and clear all enemies in your path, then you’ve already experienced the gunplay. I’d also like to point out that I didn’t find any bugs or glitches, which is nice. I one I did find, however, was that holstering your weapon automatically reloaded your gun, even though there’s a mechanic to reload.

Count it — First is 7 shots with a reload, then 3 sets of 6 shots without literally reloading but by holstering the gun, followed by 7 shots of a holstered “reload”. That’s a missed bug right there

I found that the game gave you plenty of opportunities to do what you wanted, but there were so many scripted events that it didn’t matter what you chose. From the beginning, the game gives you the option to shoot and kill enemies or use stealth to bypass them. But, it never felt like it made any difference if I decided to go on a stealth run through a level and let NPCs live since running and gunning seems like the overall intention by the developers. For example, at one point I had completely taken a stealth approach through a level, not once being seen. Sometimes there will be a guard hiding behind a corner, waiting for me to appear in their vision, in order to take me down. It’s as if he was scripted to be there. That’s either some poor AI design or the devs decided that stealth should be an (unnecessary) option.

There’s also plenty of QTEs. And look, I say it right now that I’m a fan of quick-time events as long as they work well in the story. Take the masterpiece that God of War is and its use of QTEs, that’s how it should be used – if it works well within the gameplay, and isn’t just thrown in there to fill out the (lacklustre) gameplay. Liberated went the ‘everyone hates’ route of utilising this mechanic and shoving it in places that don’t need it. Spoilers ahead on this one. In the last portion of Issue One, you and your crew enter an establishment, and its owner immediately tries to throw you out. Your crew won’t listen, so he proceeds to draw and point his gun. Immediately, the protagonist grabs the man and his gun, and a QTE event ensues. And guess what? You can’t win it. The story demands that you lose this event, so you can die and play a new character in the next issue. To make sure that you’ll fail the QTE the game will keep giving them to you and the window to react eventually reduces to milliseconds. That’s beyond me – why bother putting a QTE in when the story requires a shift in perspective? I mean, it’s a comic book – just display in those panels that the protagonist wanted to do some good and immediately dies and fails. There’s no point giving the player an option to save themselves with the illusion of choice. 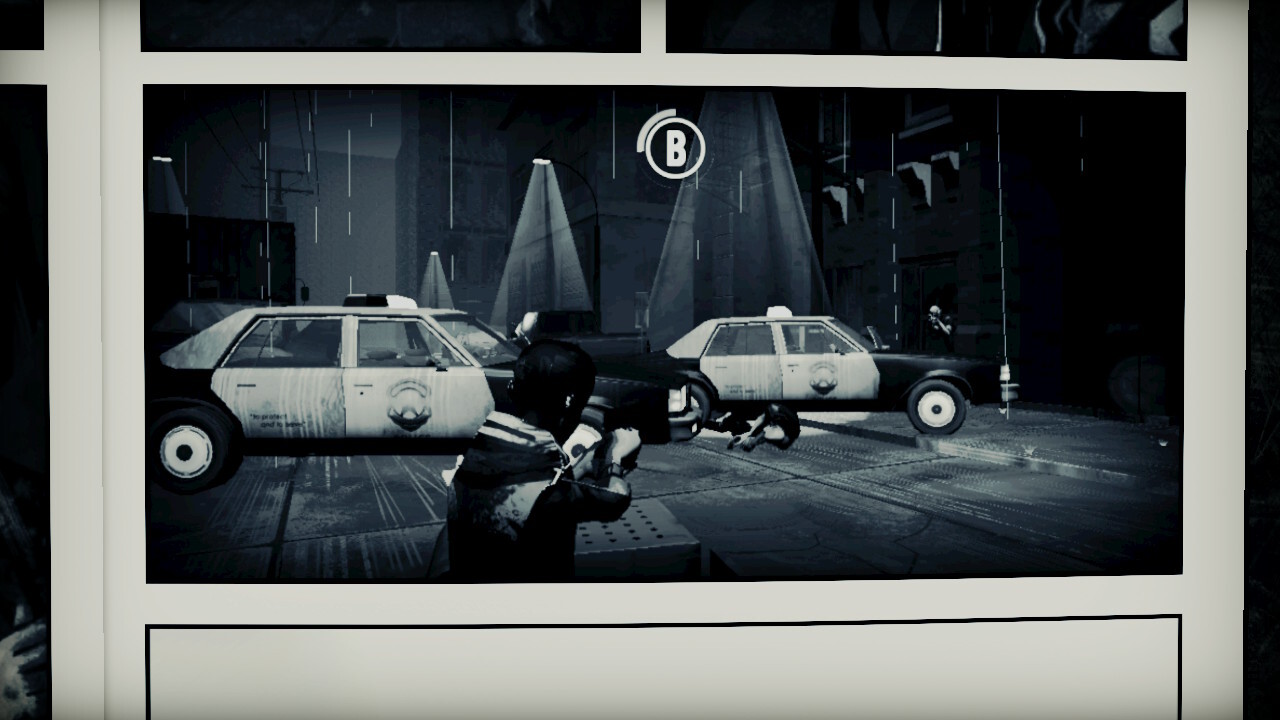 As you’ve likely noticed, I’m pretty disappointed in this one, since the dystopian genre is my favorite genre. I will say that the story is good, it’s just heavily uncreative with it ripping off the bigger classics of the genre. And while I do adore the creative decision to play within panels, and feel a part of the story, ultimately the gameplay suffers. There’s nothing about the gameplay that hooks you as you progress through the issues – you’re just going to be hiding (sometimes) and shooting (most of the time). There’s no drawback on going HAM and killing everything, even though the game gives you the ability to stealth levels. If you want a title you can finish within hours, has an overall weak story, but it’s dystopian fiction, then it might suit you. But, if you want a stronger story in the same genre, and will keep you wanting more, then you’re better off trying anything else.

Liberated wants to be so much, but it trips on its own feet within the first comic issue. The idea to read a comic book on your Nintendo Switch, and also play within those same panels, was a fantastic creative decision. However, the developers seem to have put more effort into that idea than filling out the rest of the gameplay, which is nothing short of lacklustre. If, at times, the cliche story didn’t read like a low quality YA novel, then I’d have appreciated it more.

With a deep interest in writing, Ben followed that into a Journalism degree. As an avid lover for gaming, he is constantly expanding his library with console, PC, and VR games. He's obsessed with stealth games and loves hunting down the smallest of details inserted by devs.
Related Articles: Liberated
Share
Tweet
Share
Submit