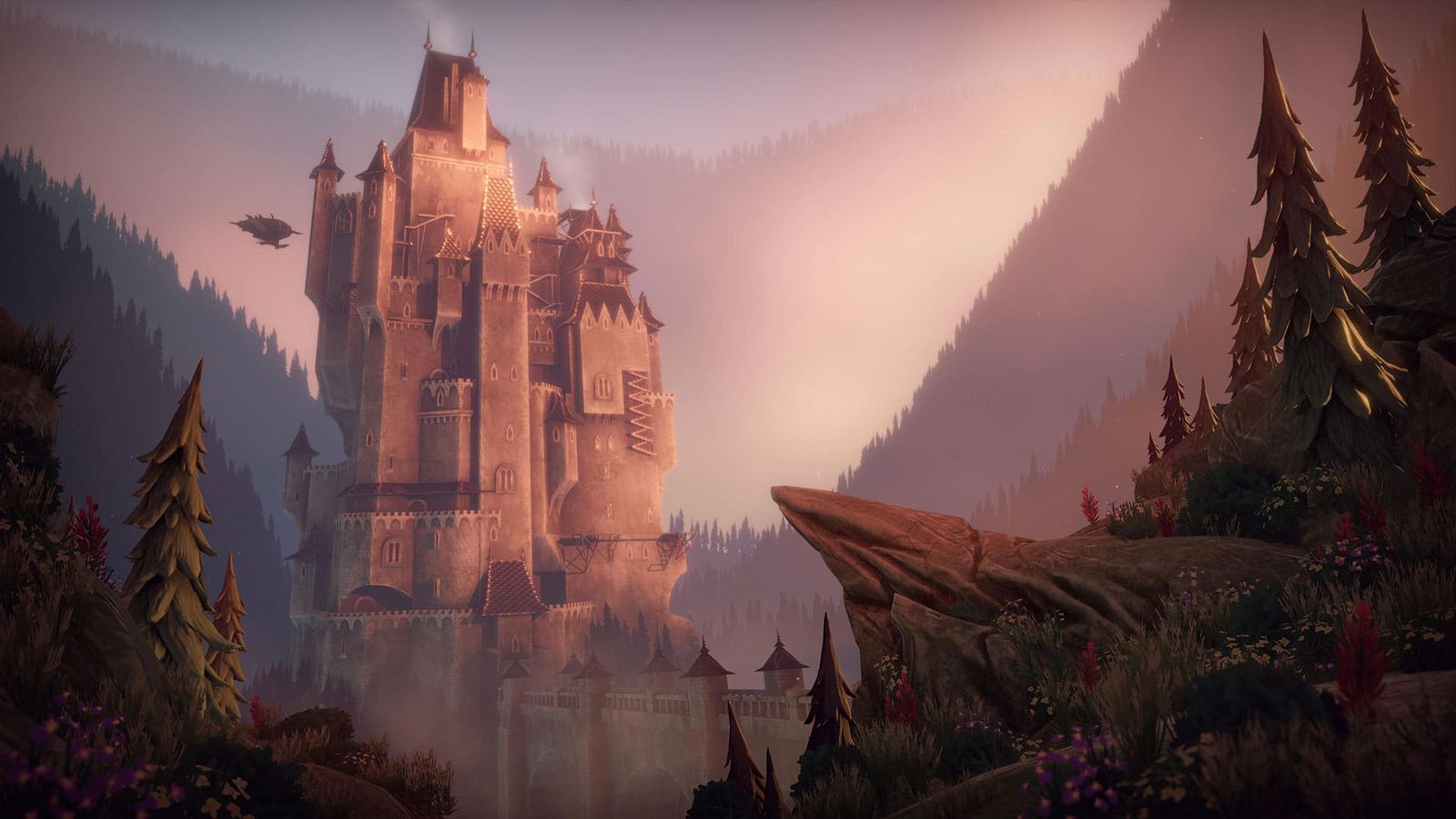 When you think of tactical role-playing games with the slow and methodical turn-based system that accompanies them, you probably think of titles like Divinity: Original Sin and XCOM. They are, arguably, the heaviest of heavy hitters in this genre — a genre that has spawned countless clones. The Dungeon of Naheulbeuk: The Amulet of Chaos is one of these titles, a title that copies a lot from its predecessors as well as tries to spin its own tale. Is it fun? Is it worth your time? We’ll answer those questions shortly.

But first, what is The Dungeon of Naheulbeuk: The Amulet of Chaos? Well, let’s call it DON:TAC for short cause f*** having to read that each time. DON:TAC entirely takes place in a dungeon aptly named, you guessed it, Naheulbeuk. There are seven characters to pilot: Ranger, Wizardess, Barbarian, Elf, Thief, Dwarf, and Ogre. Each character has their uniquely exaggerated personality that you’ll likely hate at the start, then as they normalize and simmer down you’ll grow to love them. The purpose of this game is to lead the weird group of characters through the dungeon, fighting a range of enemies, all to lift the amulet’s curse.

You know what, after typing that paragraph I realized I probably could’ve just said “the title sums up the entire story”… 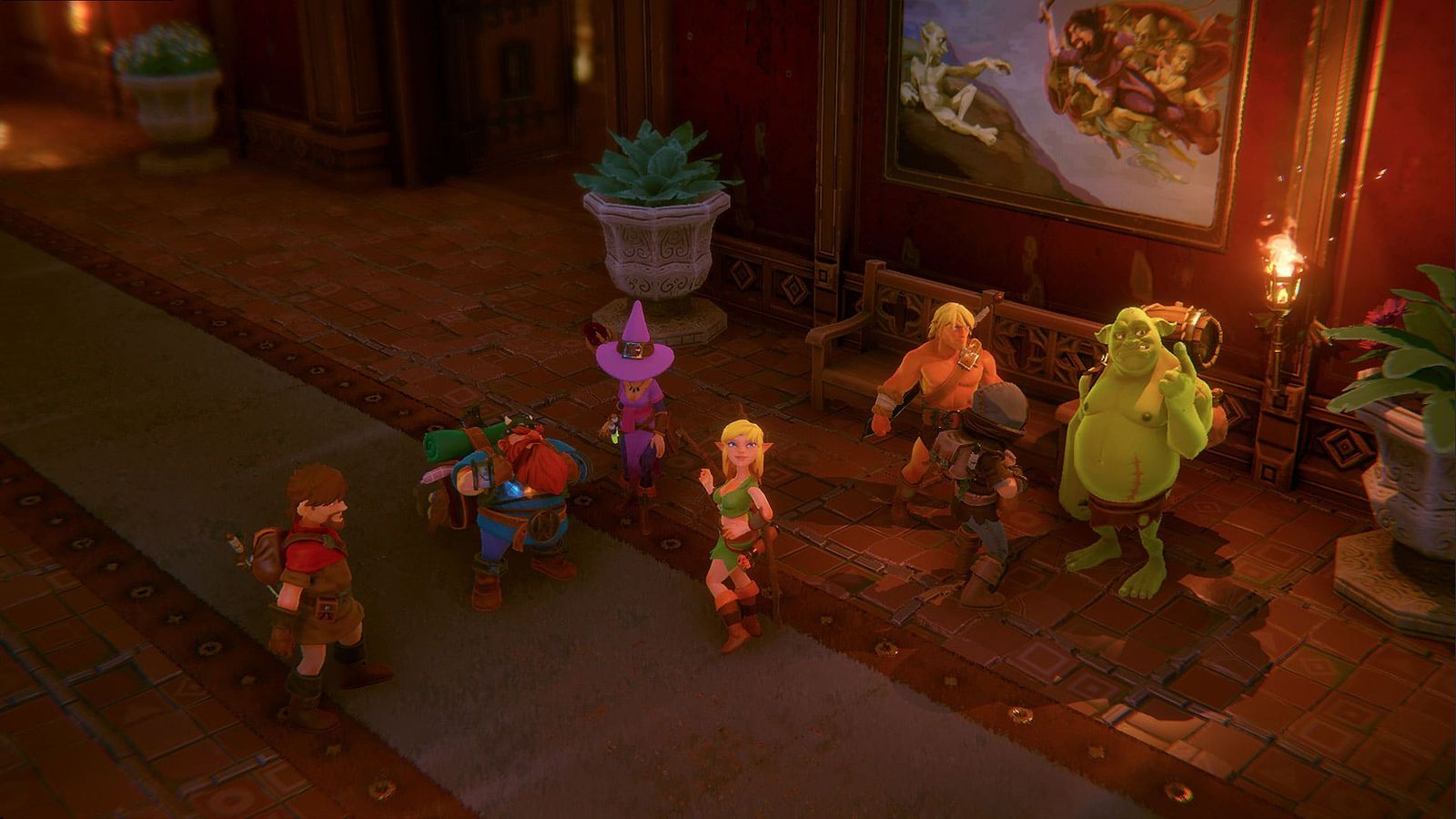 Anyways, I’d like to emphasize the point that they’re effectively caricatures of a specific type of personality. For example, the Ranger is extremely arrogant and proud; the Wizardess is all brains no brawn; the Barbarian is all brawn no brains; the Elf is extremely dumb and lustful; the Thief is anxious and paranoid; the Dwarf is rude and angry; the Ogre is… just an ogre. At the beginning of the game they seem to despise working together — but it’s also clear that they’ve been on many past adventures and they aren’t just strangers that found themselves in the same dungeon at the same time. The writing here wasn’t entertaining, even though it’s apparent that it’s trying to be funny and witty. If anything, the writing just seems too aggressive. A lot of the time the characters will talk about a challenge ahead, then one of them will insult another, then they just ignore that jab like it didn’t happen. Or like when the Elf comments during a fight that she’s doing well, the Dwarf will chime in and say something along the lines of “yeah, but you still suck”. It doesn’t really make sense that these characters hate each other so profusely when you know they aren’t just a bunch of solo explorers disgusted by the fact that they have to work with strangers, whereas the latter would make more sense. It’s like the VA’s weren’t in the same Zoom call, and were giving their lines on the assumption of how the other VA’s may give theirs.

But, let’s delve into the gameplay. As I said earlier, this game takes from the heavy hitters in the genre. By that, I only mean that it’s turn-based (as you can already tell the writing is not up to par). Each character can do one of two actions: move to an area and perform an action, or run double the distance (a feature of most RPG tabletop games as well). The amount of distance they can move depends on how much stamina they have. You can only attack once, so it helps to constantly move around the battlefield and secure better angles. Attacking from behind or to the side grants flanking bonuses and increases your damage output, so it also helps to read the battlefield like a chessboard and play to each character’s strengths. 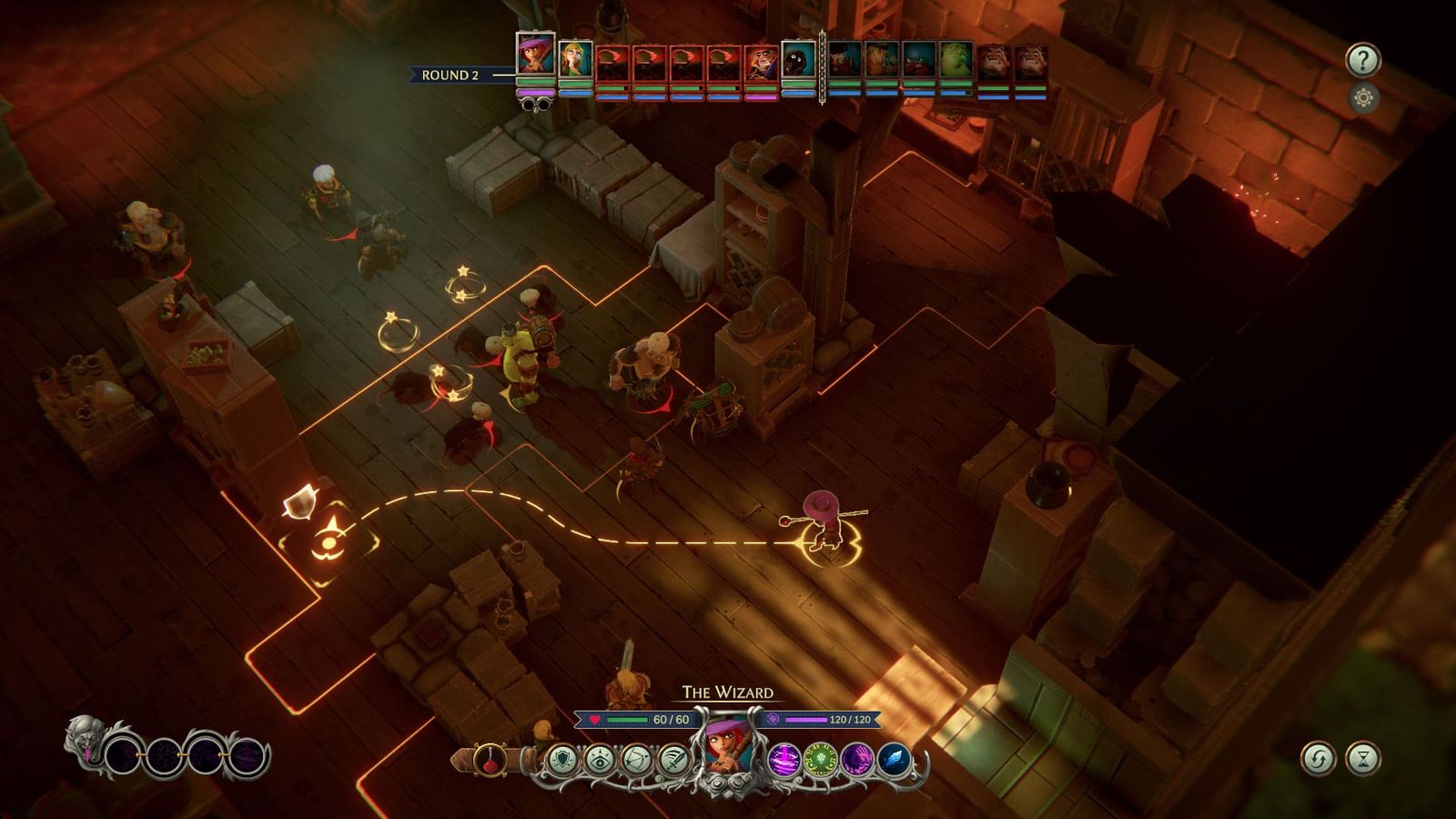 Speaking of strengths, let’s look at their skills. There are three sections you’ll upgrade upon leveling up; skill points, offensive/defensive actions and passives, and supporting passives. The skill points are as you’d expect, relating to how much damage you can output, how much health you have, etc. The interesting part of leveling up is the other two. For the offensive and defensive sections, you can upgrade and unlock a variety of attacks and general bonuses to your character. These actions are different for each character; the Thief can unlock poison-tipped arrows, the Dwarf can unlock a charge that knocks down enemies, the Elf can persuade enemies to fight for you for one turn. Each action you unlock suits the character’s personality; exemplifying it without it being jarring or irritating. As for the supporting section, you might unlock the ability for your character to wear heavy armor or use a bow, or you might unlock buffs when standing next to another character. Again, this feeds into this “chessboard playstyle” I mentioned earlier because you can set up your characters on the battlefield to feed off each other. Reading the battlefield in this way is one of the most satisfying things when playing DON:TAC — you’ll feel like some omnipotent puppet master as the enemies fall by the wayside.

There’s a lot more to this chess-like gameplay than just passive bonuses — your characters can also use an action to boost other characters. Sure, this might be by using an ability to improve their range or their defensive stats, but again a lot of the fun lies with manipulating the enemies on the battlefield. For example, with certain characters, you can push enemies into certain directions and deal extra damage to them; if you or an enemy move from one tile in front of you to out of your attack range you or they are granted an attack of opportunity. You can manipulate this by pushing an enemy into the range of another character, and just deal damage upon damage. This is incredibly fun to accomplish because of how difficult it is to set up and how daunting this learning curve might feel — but again, when you control the battlefield like you’re directing the pieces on a chessboard you quickly feel like a master at work. 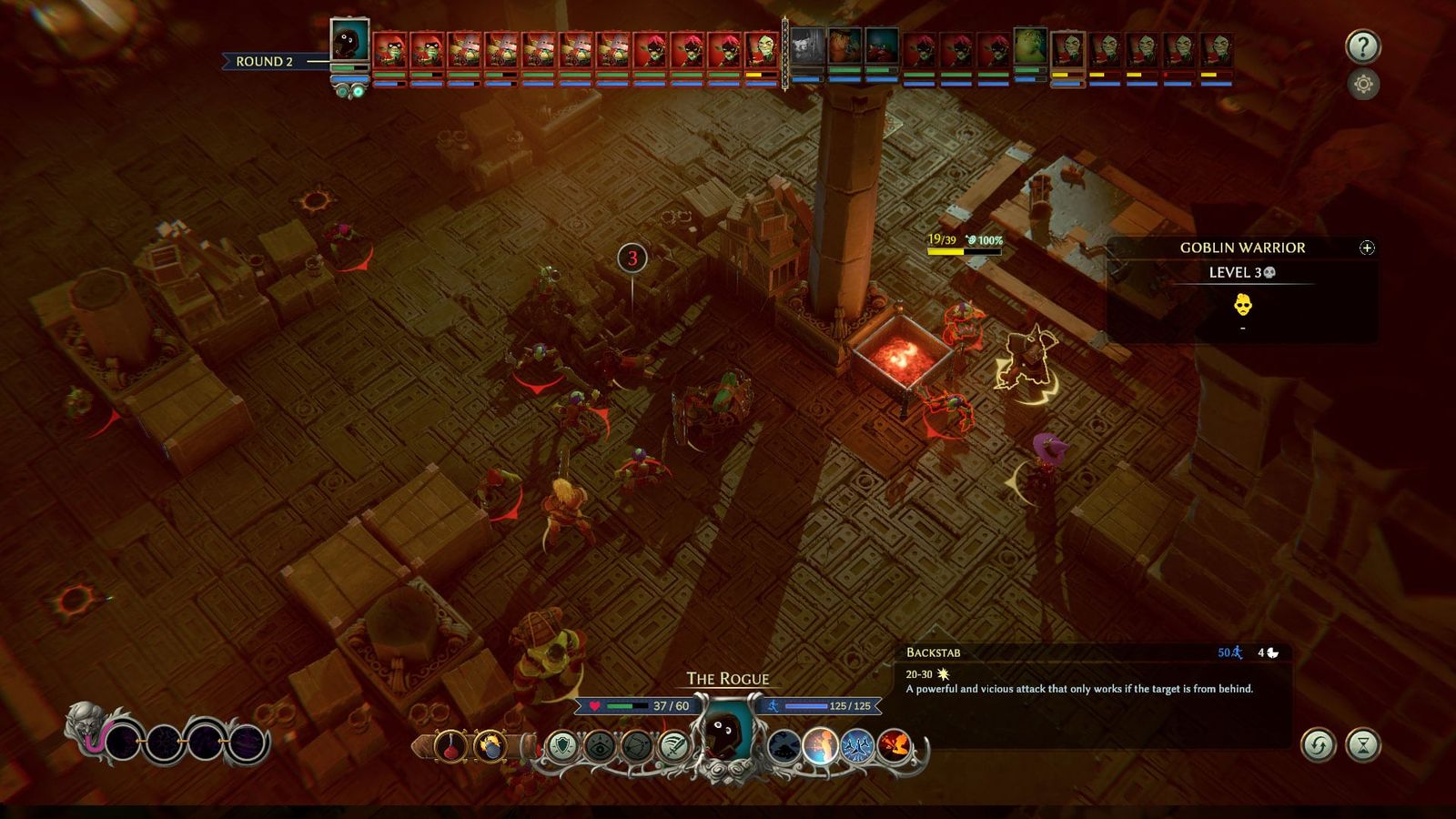 There’s a lot of good with the gameplay, and then there’s the bad. The most egregious example is how the RNG system feels significantly more predetermined than the name would typically suggest. I ran a quick experiment before one of the fights where I moved the characters in the same place three times in a row and wrote down the damage values I and my enemies outputted. Three out of three damn times and I found that the values didn’t change whatsoever. It seems that as soon as you’ve played through that area once, reload the save, then you’ll get the exact same RNG values as before. If it’s not that, then the RNG values are absolutely predetermined as soon as you begin your playthrough — like the game rolled 1000 dice from the beginning, stored them, so if you were to reload a save you’ll get the exact same result regardless.

Other than that, I found that even on the second-lowest difficulty the game was a little too difficult. 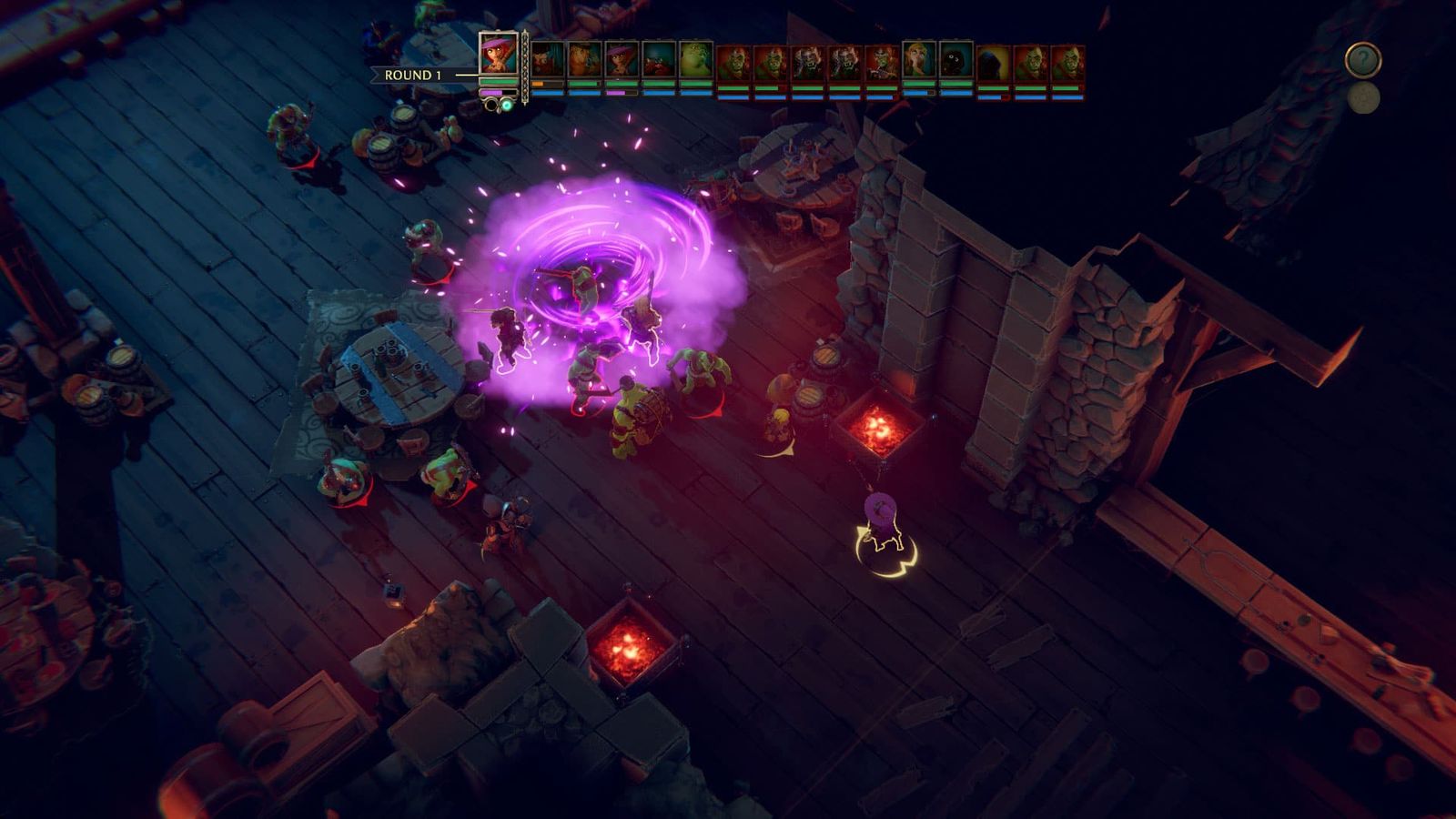 No matter how much I would min-max the skills so I had higher precision, or put more points into strength, it would more often than not give me the lowest possible value that it could. It makes the game significantly unenjoyable when I’m constantly fumbling my hits, rolling a critical fail, and taking damage on myself. Sure, the game tries to make up for this by giving you a piggy bank of bonuses when you “roll” poorly, but it doesn’t change the fact that you’ll eventually lose the fight if you don’t start off strong enough. Again, with the number of predetermined dice rolls the game seems to have under the covers the difficulty stacks up ten-fold on all the lower difficulties.

The last thing I’ll touch on gameplay-wise is how you can’t really level up your character the way you want to. It’s extremely linear in this sense, as there’s a very limited number of side quests that are all either extremely boring (like collecting the volumes of a book) or tedious (like fetch quests). They’ll give you XP, sure, but it’s not much, whereas the main quest levels you up a hell of a lot more. This means you really can’t level up that much before a battle and become more powerful than your enemies. Most times, you’ll find that you’re playing against the game entirely rather than with it. 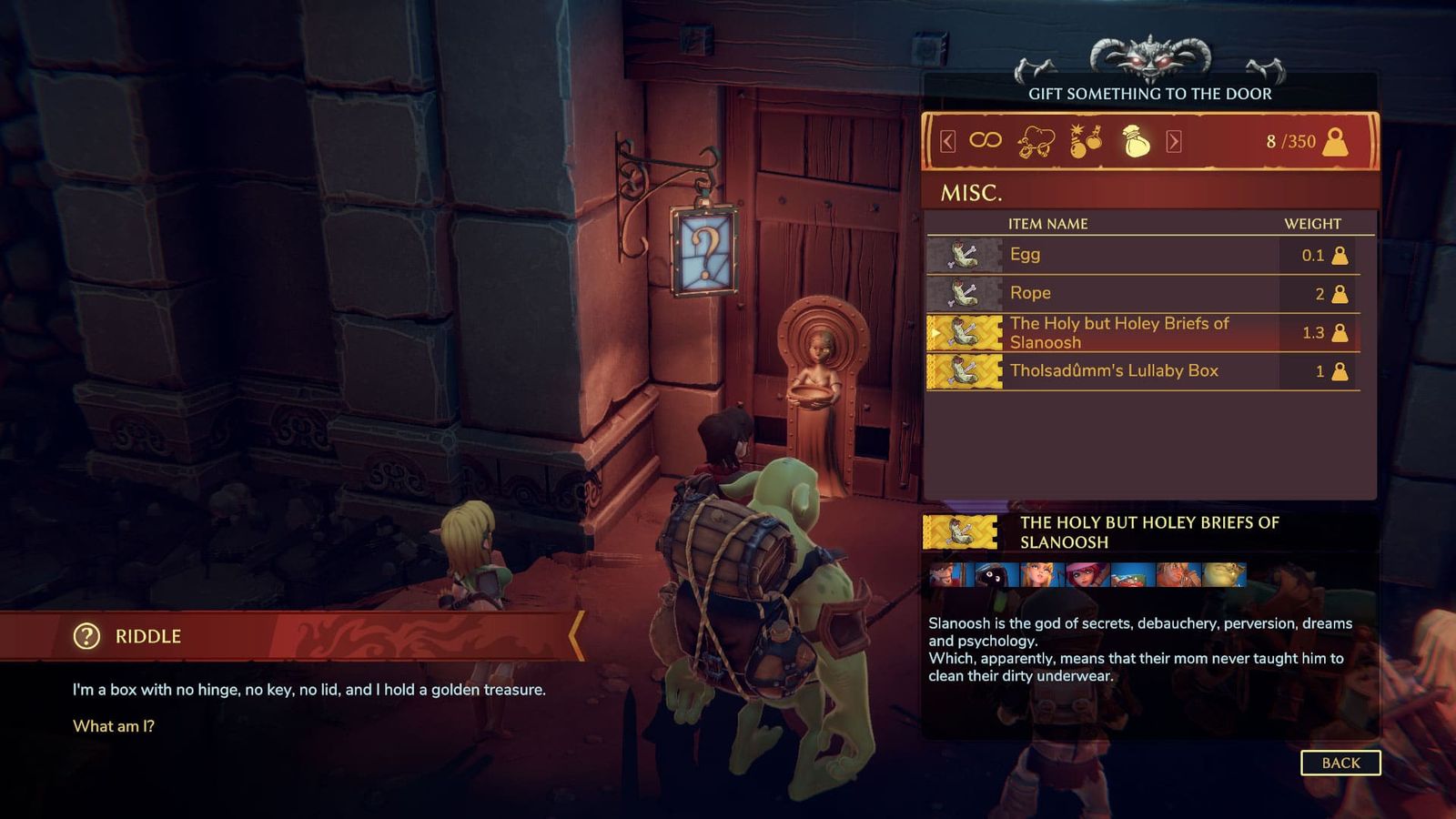 One of the things I deeply enjoyed in this game was the art style, even if it did feel a little too wacky at times. The blocky, relatively low poly, fantasy aesthetic the game runs with encourages this goofy attitude the game tries to boast. It suits the style of the game, and no matter how daunting the enemies might be the game overall feels warm and welcoming. This does, eventually, clash with the writing of the game — which is far from welcoming as you’d imagine. It’s not R-Rated, but it’s not PG-13 like the art style might suggest. To personify the game just once; it clashes with its own emotions far too much.

At the end of the day, Dungeon of Naheulbeuk: The Amulet of Chaos is a game that’s good for a few hours and one to come back to every now again — but is a bit of a drag when played in long sessions. There’s a lot of issues that extend into the design choices of this game that have negatively impacted the overall experience. Toning down the dialogue, making the characters a lot less hostile towards each other (sure they’re friendly eventually, but the start is extremely jarring), and sticking with the goofy and fun aesthetic (rather than channeling a toxic party of tabletop RPG gamers early on) would’ve done the game a whole lot of justice. Thankfully, or at least when it’s going well, the gameplay is a blast — even if the difficulty doesn’t scale accurately when the RNG element seems a little more than predetermined.

The Dungeon of Naheulbeuk: The Amulet of Chaos

Dungeon of Naheulbeuk: The Amulet of Chaos has a lot of obstacles in its way from becoming a solid gem worth your time. The first few hours are a bit of a drag to get through since the majority of this time you’ll spend either hating the dialogue or hating the difficulty from the (more predetermined than random) RNG that this game employs. Trudge through this and you’ll find that the learning curve gets easier, the writing simmers down a bit, but the difficulty still remains the same.

With a deep interest in writing, Ben followed that into a Journalism degree. As an avid lover for gaming, he is constantly expanding his library with console, PC, and VR games. He's obsessed with stealth games and loves hunting down the smallest of details inserted by devs.
Related Articles: The Dungeon of Naheulbeuk: The Amulet of Chaos
Share
Tweet
Share
Submit