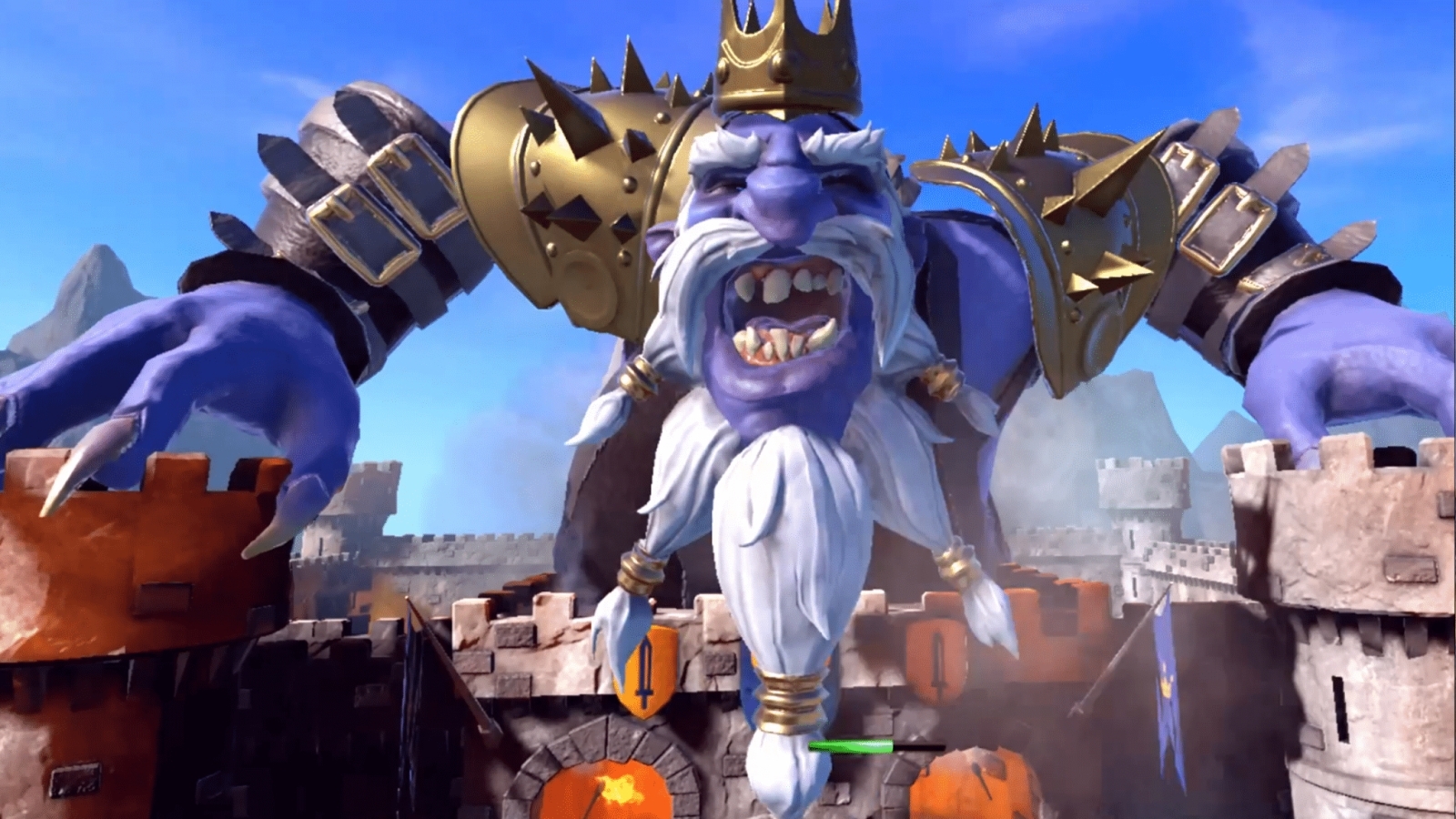 It’s a bit of inside baseball, but game journalists get pitched a lot of games to review, and it takes something special to catch our eye. Familiar refrains like rogue-lite, MOBA, battle royale, and Metroidvania all get the words “with a twist” tacked onto the end, but rarely is that twist more than a nudge towards something new. Virtual reality changes that as it provides an entirely new way of interacting with the world. Good Goliath looks to change up the wave-based genre with a few new ways to play. Could this be the game that gets me to enjoy this genre?

So the story goes, massive giants used to roam the lands, but now they have passed into legend. Well, you can imagine the surprise on people’s faces when they (and other massive beasties) start popping up to wreak havoc on their unsuspecting little towns. Thankfully, not all of them are bad — that’s where you come in.

The game starts in Peasantville. Reminiscent of the classic novel, Gulliver’s Travels, the giant is strapped down and in this tutorial level, you’ll have to “learn the ropes”. The peasants are revolting (aren’t they always?) and begin throwing pitchforks. Dodging with your head avoids damage, as does deflecting incoming projectiles with one you are currently holding, though the latter requires a bit of timing and finesse. As this level progresses, more enemy types begin whipping things at your face (you can pull pitchforks out of your body and throw them back, if you happen to get stuck with one), and soon enemies start popping up on top of the buildings. Flying witches, barbarians with barrels, and even another giant await you in this first level — it’s all shockingly chaotic, but a lot of fun.

Most wave-based games, and especially in VR, are about simply fighting hordes of ever-escalating samey enemies. Good Goliath, has more in common with games like The Wizards (an excellent VR game in its own right) pitting players against hordes of foes, but providing enough variety to keep it interesting.

It is worth pointing out that how you throw things has a great deal to do with your overall accuracy. Barrels, pitchforks, and jousting lances are best thrown with an overhand toss, wagon wheels make use of a frisbee toss motion, spiked bombs work well with a lobbing action, and bowling for knights brings back memories of the Wii. In all, there are twelve stages in Good Goliath, and each has their own enemies to contend with, and each introduces a new weapon to toss. It’s great to see a developer focus on making each level unique, rather than using the same foes repeatedly. Throwing an angry shark at someone never gets old, I can promise you.

As each of the levels progress you’ll need to “uptrade” to better weapons. “Uptrade Objects” are items your enemies might throw back at you if you hit them. These can be red barrels (I think we all know what they do), a bit of cake to restore your health, a gun that you can load with literally anything (including sharks!), cannon balls, and much more. As the levels progress, you’ll face tougher challenges, with the final area asking you to pop flying enemies carrying villagers so that they drop into the mouth of ancient evil idols.

Replayability is always a factory in VR games, and score is often the goal, aside from level completion. Good Goliath is no different, offering up a bronze, silver, or gold star for higher scores. As the enemies shoot or throw things at you, you’ll catch them and fling them back at them to cause damage. Doing so without being hit yourself, and in a rapid succession yields higher point multipliers, though you’ll find distant targets of opportunities might just eek out some additional score if you pay attention. Using TNT barrels or bombs to get multi-kills and crushing the environment pushes your score higher, and when the dummies are kind enough to mark them with bullseyes, who am I to resist that temptation? Hidden throughout the levels are treasure chests to find, eight in all, containing new hands for your giant. The first is a booger-covered hand, but my personal favorite is Kraken hands.

If there is one area where Good Goliath could be criticized, it’d be the difficulty progression. The game gets insanely challenging before you fight your first boss, and it doesn’t let up from there. It does mean that you’ll have to restart at one of the checkpoint areas, which can be back several waves from where you were “knocked unconscious”. It’s a minor nit, but it could make Good Goliath tough for the little ones.

One of the things you’ll appreciate about Good Goliath if you are a nausea sufferer like I am is that the game is stationary. Head movement is necessary to dodge, but I never felt any nausea symptoms. Releasing on PSVR as well as PC platforms means the game is built to be played standing or sitting, which can also help. In my 5 hours with the game (roughly the amount of time it’ll take to beat it once) I can’t say that I encountered any motion sickness, making this family-friendly title easy to recommend.

It’s refreshing to see a wave-based shooter that doesn’t quickly devolve into a mindless numbers game. Good Goliath’s storybook art style and settings are varied and interesting, and the throwing mechanic starts off simple and ends somewhere past chaos, but in a fun and rewarding way. While the peasants may not like you much, Good Goliath is a great game for your whole giant family.

Ron Burke is the Editor in Chief for Gaming Trend. Currently living in Fort Worth, Texas, Ron is an old-school gamer who enjoys CRPGs, action/adventure, platformers, music games, and has recently gotten into tabletop gaming. Ron is also a fourth degree black belt, with a Master's rank in Matsumura Seito Shōrin-ryū, Moo Duk Kwan Tang Soo Do, Universal Tang Soo Do Alliance, and International Tang Soo Do Federation. He also holds ranks in several other styles in his search to be a well-rounded fighter. Ron has been married to Gaming Trend Editor, Laura Burke, for 21 years. They have three dogs - Pazuzu (Irish Terrier), Atë, and Calliope (both Australian Kelpie/Pit Bull mixes).
Related Articles: Good Goliath, Let's Play, VR
Share
Tweet
Share
Submit