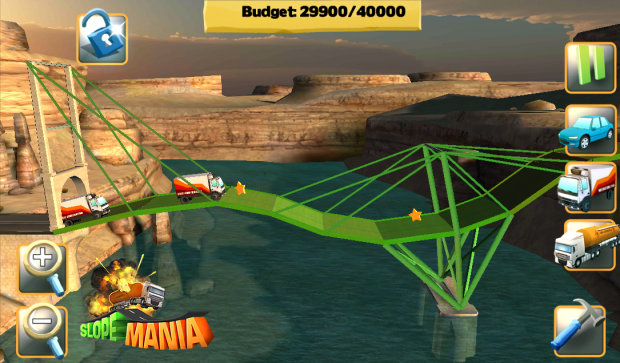 I actually used to think that I was good at building things. Seriously. All of the men in my family have been carpenters for generations, and I have built castles in Minecraft that I always considered to be pretty impressive, so I’ve always sorta assumed that it was a strength. After about ten minutes of playing Bridge Constructor, I realized how truly wrong I have been all these years.

Bridge Constructor is exactly what it sounds like–a video game wherein you are tasked with building bridges. If that concept is immediately off-putting to you, you aren’t alone–I too first played this game with apprehension. Luckily, Bridge Constructor has a surprising amount to offer despite some glaring issues.

Realistic physics play a huge role in Bridge Constructor. The player must use different materials, geometric angles, and support points to create a functional bridge that can remain intact once cars, trucks, and semis start driving across it. Each material has different properties, strengths and weaknesses. For example, metal wires are great for dealing with tensile force, but not compressive force, while wood support beams have the exact inverse properties. Players must use all of the tools at their disposal to build a bridge capable of sustaining massive amounts of weight.

If all of this does not sound easy, it’s because it isn’t. Players must familiarize themselves with geometry, bridge physics, and the relative stability of varying shapes and sizes. My first few hours of Bridge Constructor was a series of hilariously bad failures, which got progressively better as I familiarized myself with the mechanics. The main issue here is that if you want a bridge to work correctly, you basically have to build it by the book, which completely crushes what would have been a great opportunity for players to use their own creativity.

While the core mechanics of Bridge Constructor work quite well, the entire user experience is a mess. For one, the tutorials are bare and unhelpful. Early on in my playthrough, the tutorial boxes casually mention tensile and compressive force without explaining what either of those phrases mean or helping the player understand the mechanics. The UI is equally unintuitive, and has confusing icons and menus that border the game without any explanation, leaving the player to simply figure everything out on their own.

Bridge Constructor also comes with an alternative game mode called SlopeMania. In this mode, bridges are built on slopes, which adds a much higher difficulty, but also affords for some pretty hilarious scenarios, like building a ramp instead of a bridge and watching cars hop to the other side. This mode adds a refreshed challenge and a much-needed opportunity for players to become a little more creative.

The worst part of Bridge Constructor, however, is its sound design (or lack thereof). Upon booting up the game, you’re greeted with complete and utter silence, which persists through all of the menus until you enter a level and begin playing, at which point you then hear sound effects, but no music. Aside from a few click, beeps, and creaks, you’re in for a very silent experience in Bridge Constructor, so I recommend you BYOS (bring your own soundtrack).

Bridge Constructor succeeds at being a surprisingly entertaining bridge physics simulator, but glaring issues like the confusing UI, nearly nonexistent tutorial, and terrible sound design get in the way of it being an otherwise decent game.

You know that jerk online that relentlessly trash talks you after every kill? That guy was probably Travis "Tie Guy" Northup. Competitive, snarky, and constantly wearing a tie, Travis has been writing his opinions about electronic media since he was a teenager, and is pretty much the only person to hold his opinions in high regard.
Related Articles: Bridge Constructor
Share
Tweet
Share
Submit