Rock and Roll is dead in Vinyl City. No Straight Roads, the city’s premiere EDM group, rules with an iron fist; controlling everything from where emergency power goes to what types of music can be played. After a failed audition to join NSR, Mayday and Zuke of Bunkbed Junction decide to start a music revolution and take down NSR, one song at a time.

No Straight Roads is a rhythm action game where you fight various bosses with their attacks synced up to the music. Just from that premise, it feels like this is a video game made specifically for me as a lover of music and action games. You play as Mayday and Zuke, either in co-op or swapping between them, and engage in a battle of the bands with each of NSR’s artists. Mayday, the band’s guitarist, focuses on delivering slow but heavy hits while Zuke, the drummer, prefers to play fast and loose with his quick combos. As you take over each district of Vinyl City, Bunkbed Junction will earn fans, mods, and stickers which can all be used to gain new or change their abilities. Fans will earn you new skills like a double jump or dash from the skill tree, mods are equipable moves such as a heal or special attack using a segment of the special bar, and stickers can be placed on instruments to add small, temporary buffs like +3% attack. You’ll need to make use of all of these systems to stand a chance against each of the game’s difficult bosses, though even then things still feel stacked against you. 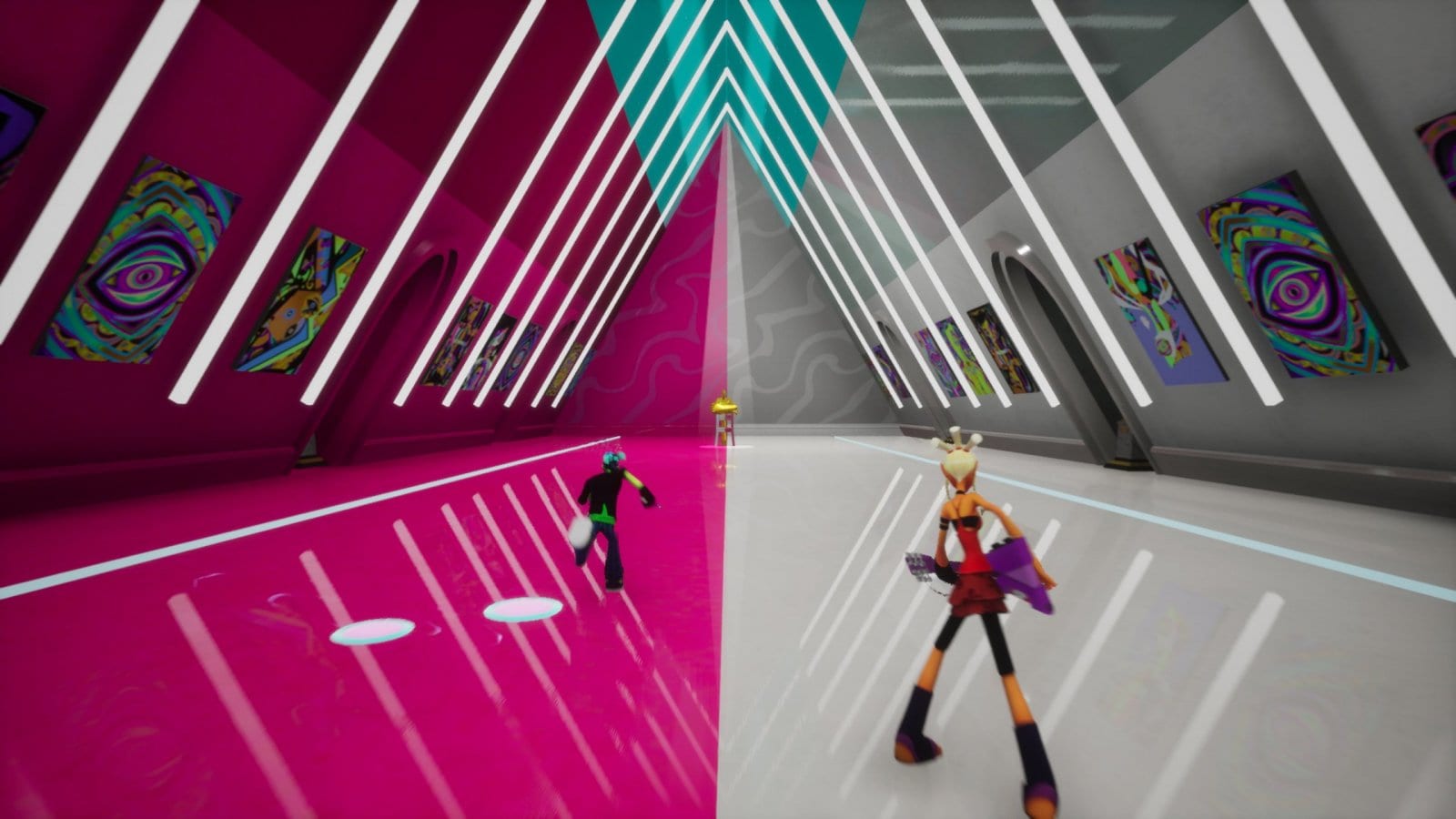 All bosses, except for the first and final, are preceded by a short platforming stage where you have to defeat a certain amount of enemies to proceed to the next section. Absolutely everything, including enemies and platforms, moves to the music, but it can unfortunately be unclear what part of the song something is reacting to. There are these pink and blue pillar things throughout the game that I could never quite figure out, their attacks always seemed to come out of nowhere, and this is a problem that persists throughout the game. It’s further exacerbated by a general lack of visual clarity. The fixed camera is always placed at a low angle, which can obscure some attacks and makes co-op very difficult to play. Speaking of co-op, which is how I and my sister played through the entire game, two players can make some fights, such as Eve’s, a lot more manageable and fun or be completely broken, like in Yinu’s fight.

Some slight mechanical spoilers ahead, so skip the rest of this paragraph if you’d like to go in blind. Eve’s boss fight sees Mayday and Zuke split up in two seperate sections, swapping between each other depending on where the boss moves. The two rooms have different hazards to deal with, which I found difficult to keep track of in single-player but far easier to manage and overall more fun with a friend. It also enhances this part of the story’s theme of two people making art together with a shared vision and building off of each other’s work. The fight against Yinu, on the other hand, was almost impossible in co-op. Her song has a section where her piano solo goes hard (which is incredible to listen to, but we’ll get to the soundtrack) and she shoots a constant barrage of musical notes at you while her mother occasionally slams the ground. In our case, Yinu would always target Zuke with this attack and with no way to swap characters he would be stun locked to death every single time. On top of that, when a player can be revived the game for some reason disables your ability to jump; meaning Mayday would take damage from the slam as well. We also encountered a consistent glitch in the game where, either after being revived or choosing to continue after getting a game over, Zuke would no longer be able to move. In addition, the game relies mostly on the music instead of the visuals to activate attacks, so you’ll frequently take a ton of damage from absolutely nothing.

Despite the many, many glitches, camera problems, and the visuals and audio being frequently out of sync, we still adored No Straight Roads. The rock and EDM soundtrack is gorgeous, catchy, and transitions seamlessly between the two versions depending on who has the advantage in a fight. The story has a lot of heart but doesn’t take itself too seriously. Combat is a ton of fun, especially with a friend, even if some moves like Mayday’s charged finishers take too long to be useful. No Straight Roads is also stylish as heck – every location, character, and effect just oozes cool. It’s clear that so much love has been poured into this game by a ton of talented people, which is why its more frustrating aspects stand out all the more. The game’s highs are spread out- the battles against Sayu, Eve, and DK West are so fun, unique, and challenging in just the right ways – while the lows are all stacked together – most of the approach stages and the duels with Yinu (in Co-op) and 1010 (their song’s not great, and the fight itself is mostly waiting). No Straight Roads could have been an excellent game, but with tons of glitches, inconsistencies, and some attacks feeling unfair, it’ll have to settle with being great.

No Straight Roads is a rockin’ good time with a friend, but beware of the many glitches, bad camera, and attacks not syncing up with the music.

David is the kind of person to wear his heart on his sleeve. He can find positives in anything, like this is a person who loved Star Fox Zero to death. You’ll see him playing all kinds of games: AAAs, Indies, game jam games, games of all genres, and writing about them! Here. On this website. When not writing or playing games, you can find David making music, games, or enjoying a good book. David’s favorite games include NieR: Automata, Mother 3, and Gravity Rush.
Related Articles: Indies, No Straight Roads
Share
Tweet
Share
Submit