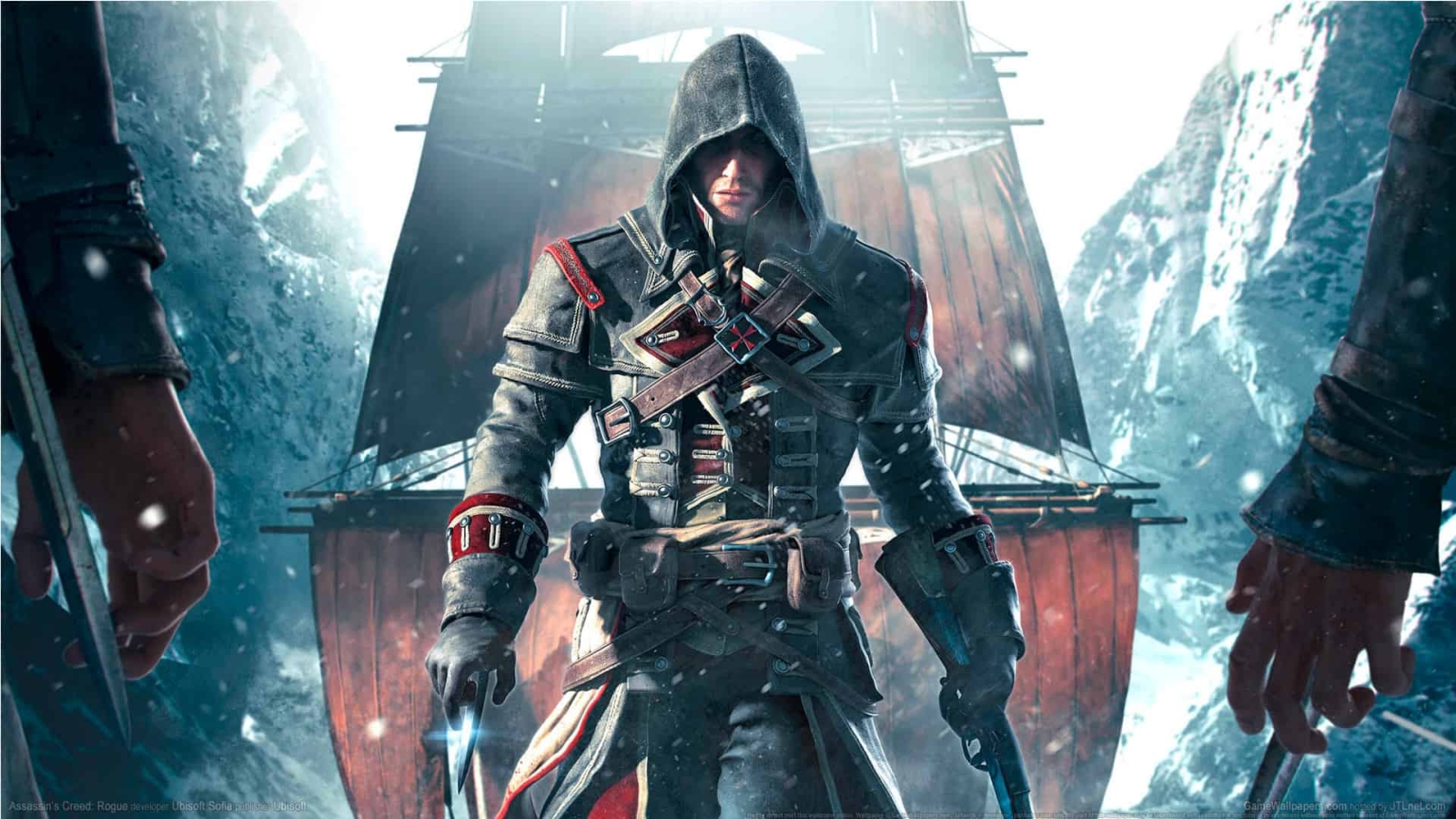 Until Assassin’s Creed Origins (Hunter’s review) came out, Assassin’s Creed IV: Black Flag (my written review, and my video review) was one of my favorite of the series. When it was re-released on PlayStation 4, many of the remaining bugs, and all of the graphical holes were filled in (My PS4/XB1 face-off review), leaving me hoping that Assassin’s Creed Rogue (David’s review) would get the same treatment. Well, I’ve gotten my wish as the game was remastered and released for Xbox One and PlayStation 4. It’s time to raise the black flag once again — drink up me hearties, yo ho!

Assassin’s Creed Rogue was released on the same day as Assassin’s Creed Unity. While Unity was fairly universally panned (David’s review) for its technical expertise, it was heralded for the cooperative multiplayer. Rogue, on the other hand, saw higher scores and praise (and was released on last-gen hardware at the time). This title tells the story of Shay Patrick Cormac, a young upstart member of the Brotherhood of Assassins. Well, things go a little sideways, taking young Cormac in a direction you might not expect. I don’t want to spoil it for those of you who missed this game the first time around, but suffice it to say that that this isn’t the usual Creed storyline.

On the technical side of things, our friends at Candyland have beaten me to the punch, already putting together a beautiful side-by-side comparison of the PS3, PS4, and PS4 Pro. The game runs at 4K on Xbox One X and PlayStation 4 Pro (720p on PlayStation 3, and then upscaled to 1080i, for reference), and that meant the team at Ubisoft Sofia had to punch up the texture detail, environmental effects, as well as pushing the draw distance, framerate, crowd density, lighting, and more.

In practice, I found that, as is usual with remasters, it’s all of the supporting cast and detail that gets the most attention. The main characters and equipment, even on the PlayStation 3, were already pretty gorgeous, so the Ubisoft Sofia team focused hard on rebuilding the world all around them. The clarity of the trees is probably the biggest thing as you can only describe the original as somewhat muddy. On Xbox One X and PlayStation 4, they are almost as crisp as they are in current gen games like Origins. Better still, the shadows those trees cast are no longer jagged and “shimmery”, instead looking detailed and crisp. Similarly, while the water was already pretty spectacular, but the team gave it a once over to bring it up to a level you’d expect from a current title.

The water in this game is a benchmark-raising level.

If there’s one area where Rogue Remastered shines brightest, it’s in the Level of Detail settings and draw distance. To keep pace with the previous generation of hardware (which still struggled a bit on framerate in the original release), the game would drop the detail on objects in the furthest areas of the background, creating a jarring transition as they “popped” into full detail view on approach. Surprisingly, this same muddy texture problem even exists on the PC version of the game. On Xbox One X and PlayStation 4 Pro the draw distance is pushed as far as the eye can see, but at full detail. There are no muddy blobs far afield any longer.

The level of detail has been raised quite a bit.

In terms of framerate, the Xbox 360 version of the game ran a little rough, dipping as low as the mid 20s when the action got frantic. On the Xbox One, the framerate stays reliably at 40 fps, running the game at 1080p with all of the new graphical additions baked right in. At 1080p, the Xbox One X holds rock solid at 60fps, but pushing to 4K resolutions sees a bit of wobble between 40fps and 60fps, but pushing the sharpness to the highest detail possible. Many games are locked at 30fps when pushed to 4K, so it was nice to see the team let the framerate run free, especially when the vast majority of the time it sits at or near 60.

Technicals and backgrounds aside, there are some challenges when you step backwards and tackle a remaster. The combat in Assassin’s Creed Origins was tight and rewarding, but Rogue returns to a time when fighting controls were a little more limited. Similarly, the RPG mechanics in current titles are gone, removing a progression mechanic that we’ve wholeheartedly embraced at this point. It’s a good reminder of just how far the series has come, but you’ll feel the effects as you step back in time. Many remasters bring current controls to their previous games. I have no idea how difficult a proposition that is, but it could have been a massive redeeming quality for Rogue Remastered. Here, it’s just a stark reminder of how much the controls were in need of an overhaul.

There are a few new goodies for those who played the previous iteration of Rogue. This remastered edition includes the opportunity to wear new outfits, including Bayek’s from Assassin’s Creed Origins, as well as two bonus missions (The Armor of Sir Gunn, and The Siege of Fort de Sable), the Master Templar and Explorer packs, and you can even wear Aguilar’s outfit from the Assassin’s Creed movie. Sure, a lot of these items are cosmetic, but getting to tackle content that was previously pre-order exclusive is great.

It’s exciting to re-board the Morrigan and step into the boots of Shay Cormac. The ground combat may feel the effect of age, but the naval combat remains a highlight of the series. While a lot of people may have chased Unity onto the new generation of hardware, missing Rogue in the process, now they can enjoy the crowning jewel of the Americas Trilogy at 4K, which looks better than ever.

Ron Burke is the Editor in Chief for Gaming Trend. Currently living in Fort Worth, Texas, Ron is an old-school gamer who enjoys CRPGs, action/adventure, platformers, music games, and has recently gotten into tabletop gaming. Ron is also a fourth degree black belt, with a Master's rank in Matsumura Seito Shōrin-ryū, Moo Duk Kwan Tang Soo Do, Universal Tang Soo Do Alliance, and International Tang Soo Do Federation. He also holds ranks in several other styles in his search to be a well-rounded fighter. Ron has been married to Gaming Trend Editor, Laura Burke, for 21 years. They have three dogs - Pazuzu (Irish Terrier), Atë, and Calliope (both Australian Kelpie/Pit Bull mixes).
Related Articles: Assassin's Creed Rogue Remastered
Share
Tweet
Share
Submit