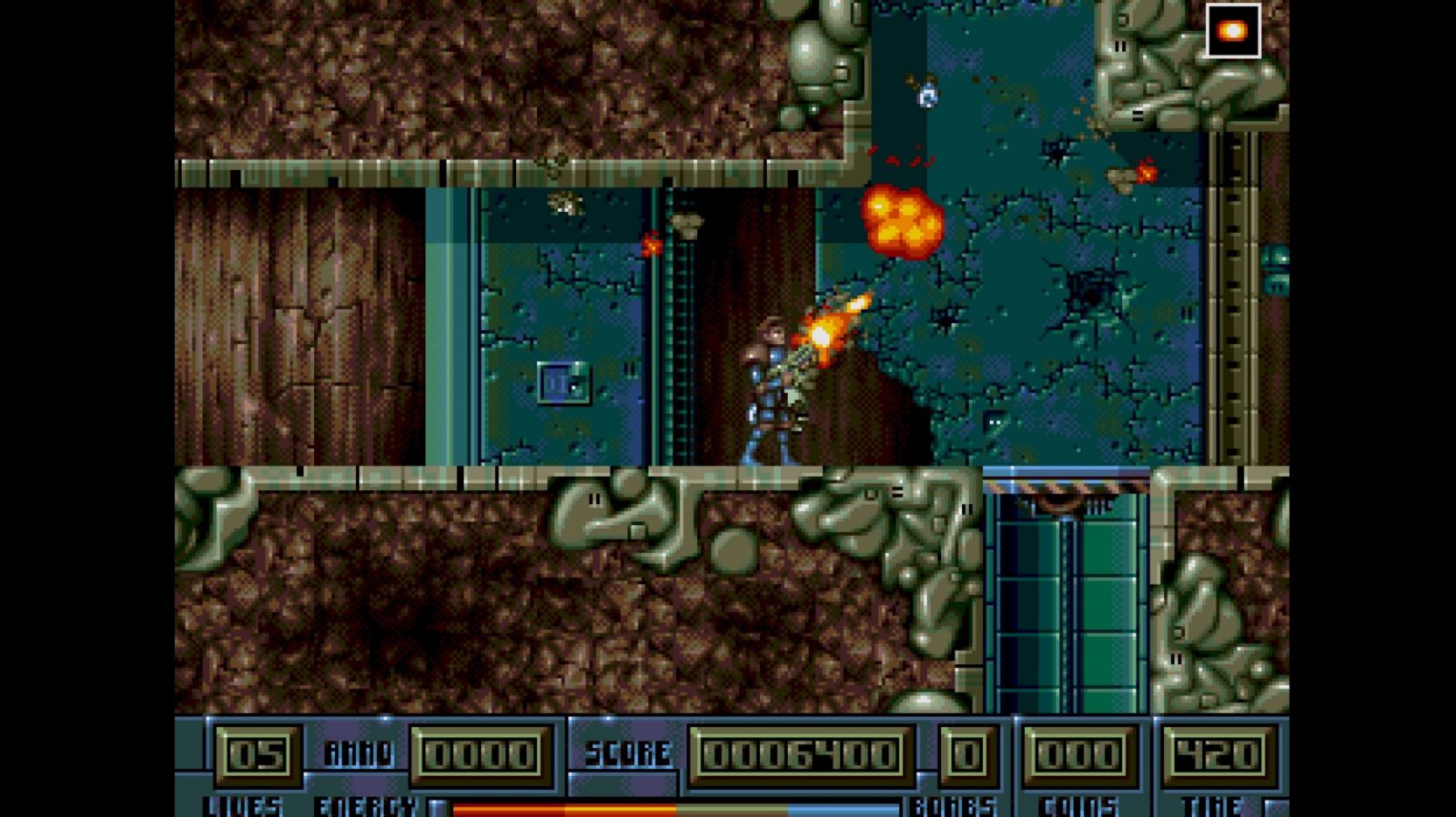 In the age of 4K graphics, high framerate gameplay, and games that require a plethora of buttons just to get past the title screen, here comes a game that says none of that overcomplicated gameplay and overdeveloped graphics are necessary for players to have fun.  Ultracore is a 16-bit, 2-D action-shooter that was shelved roughly 25 years ago because of the changing landscape of videogame consoles.  Now, this run ‘n gun shooter is looking to capture that 90s nostalgia in 2020, and it does this with updated controls and enough explosions to make Michael Bay jealous.

Like most 90s shooters, Ultracore drops you right into the action with no story, cutscenes, or anything to take your mind off of shooting the flanking robots that have taken over the compound. Because the game’s controls have been updated to fit the current playstyles of modern times, it operates as a twin-stick shooter, making it easy to gun down robots in this frantic, fast-paced shooter.  As I ran through the first of the levels, I found the controls were tight and responsive, especially in the platforming sections where I had to run, jump, and shoot at the same time.  Quickly aiming in a direction and moving the soldier was easy as well, something that a lot of older games of the 90s didn’t do. 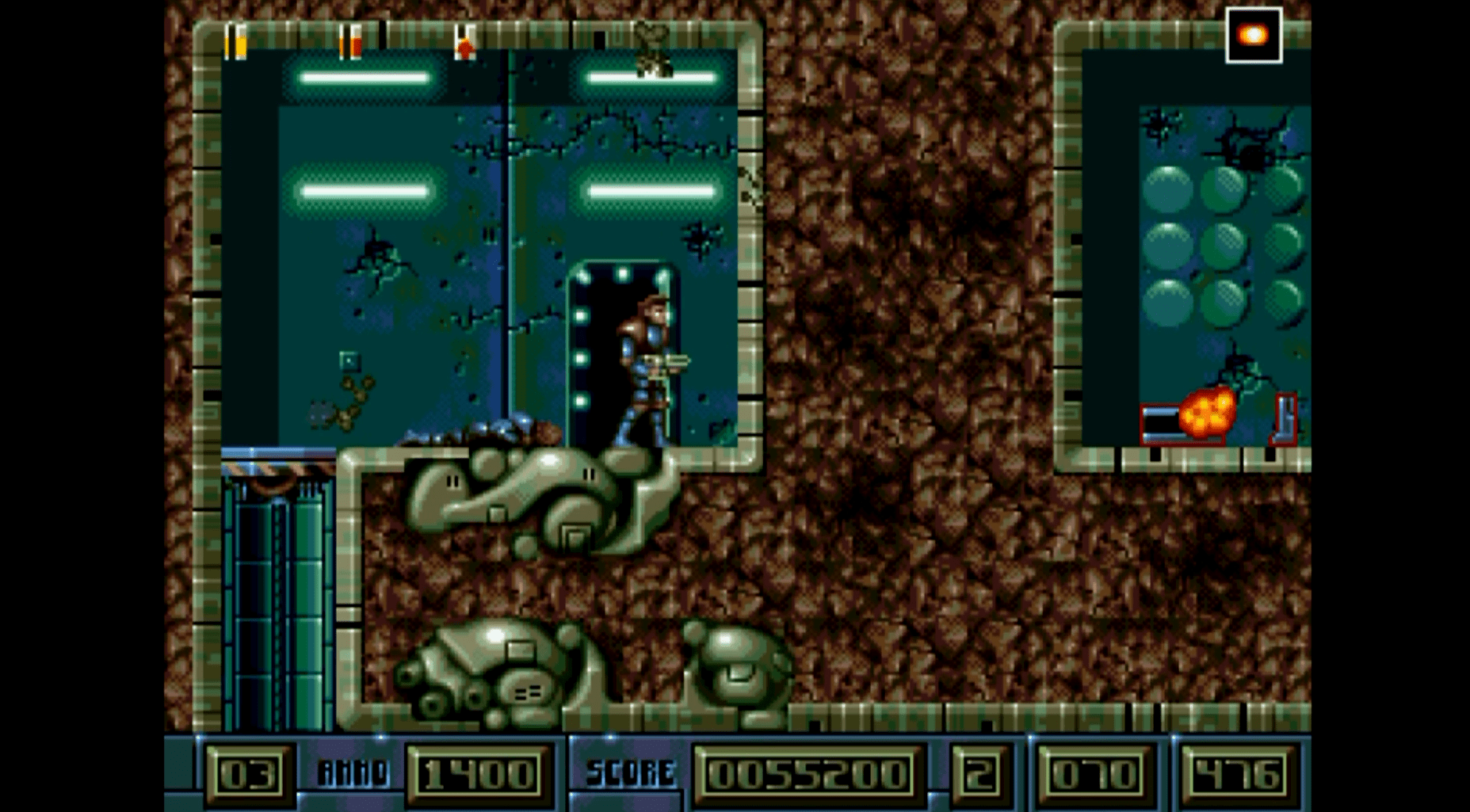 Seek and ye shall find

The first level drops you into battle with a basic weapon, a rapid-fire machine gun that has unlimited ammo.  Other guns like the laser rifle, rocket launcher, and the tri-shot, all have a finite amount of ammo; luckily, ammo pickups for them are plentiful.  You will also be using quite a bit of platforming skills to traverse the levels, so having quick reflexes and a keen eye for traps is important.  Jumping onto disappearing landing pads, step, and other tight spots made the game more challenging than the robots themselves.  Like many side-scrolling shooters of the 90s, the designs of the levels were merely to give the impression that you were in a larger world than you really were, but in Ultracore the levels have been carved out to really give a sense of being in a multi-tiered environment.  Each level, whether I was inside of a factory, outside, or underground, felt like it was designed to be explored, not only horizontally, but vertically.  Though it’s a 2-D game, the visuals are crisp, making it easy to navigate the labyrinth levels.  In Ultracore, the levels not only offer hidden locations, but interactable objects.  Nothing too serious, but more than the typical 90s games would.

As I shot through robots that never stopped attacking, I accidentally found a secret area.  I say accidentally because it was hidden behind a wall in an area that normally wouldn’t be searched.  One of my biggest gripes about the game is that the secret areas don’t stand out enough from the world.  Instead of the wall being flat, it will look like it’s a bit crumbled, but not enough that it felt like it was a secret area.  It simply looked like part oft he level design.  Also, interactable objects such as control panels that give you access to the map of the level all blend into the environment: a bad choice of color and design is definitely to blame.  It’s odd the way this game chooses to not let you know that certain objects are made to interact with.  Weapons can be hidden in suitcases, but when you walk up to the suitcase or any interactable object, the game gives you no clue as to how to interact with it or what it is.  When I played my second playthrough, I then realized how many objects I missed because the game doesn’t tell you anything. 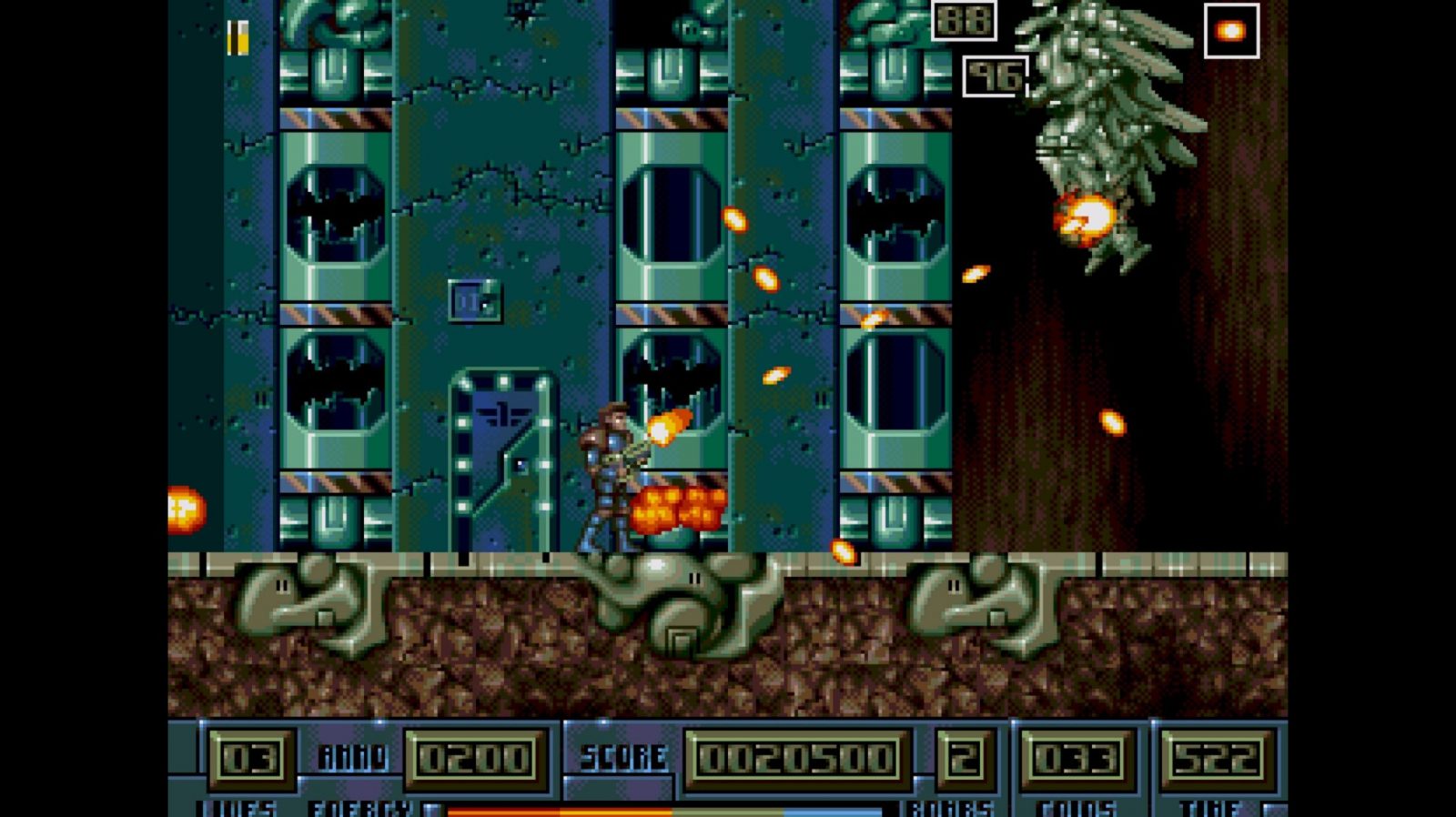 The odds are against you

The enemies are plentiful and not much of a challenge, except the robots that shoot missiles that force you to duck and fire at the same time.  Many of the enemies either are small enough to evade your bullets, fly around being a nuisance, forcing you to shoot at odd angles, or robots that are bullet sponges.  Aside from robots, many of the levels have turrets built into the levels themselves that really cause much of the trouble you’ll face.  Because the color of the enemies and turrets are almost the same color as the levels, it’s difficult to discern where to shoot and what’s actually shooting at you.  I don’t know who did the art, but it’s definitely a problem when the world, enemies, and collectable coins are all the same color.

Continuing to pay homage to the games of the 90s, each level is timed; though you have plenty of time to explore and find new weapons like laser rifles, grenades, etc., you’ll never feel rushed.  You can even find time pick-ups to extend your playtime in that particular part of the map.  To progress, you usually have to find a keycard that is either dropped by one of your fellow comrades that died as they attempted to make their way through, or by defeating a mid-level boss.  I’d like to say that this game has more to offer than what’s on the surface, but when it comes to 90s shooters, you can mostly take them at face value. 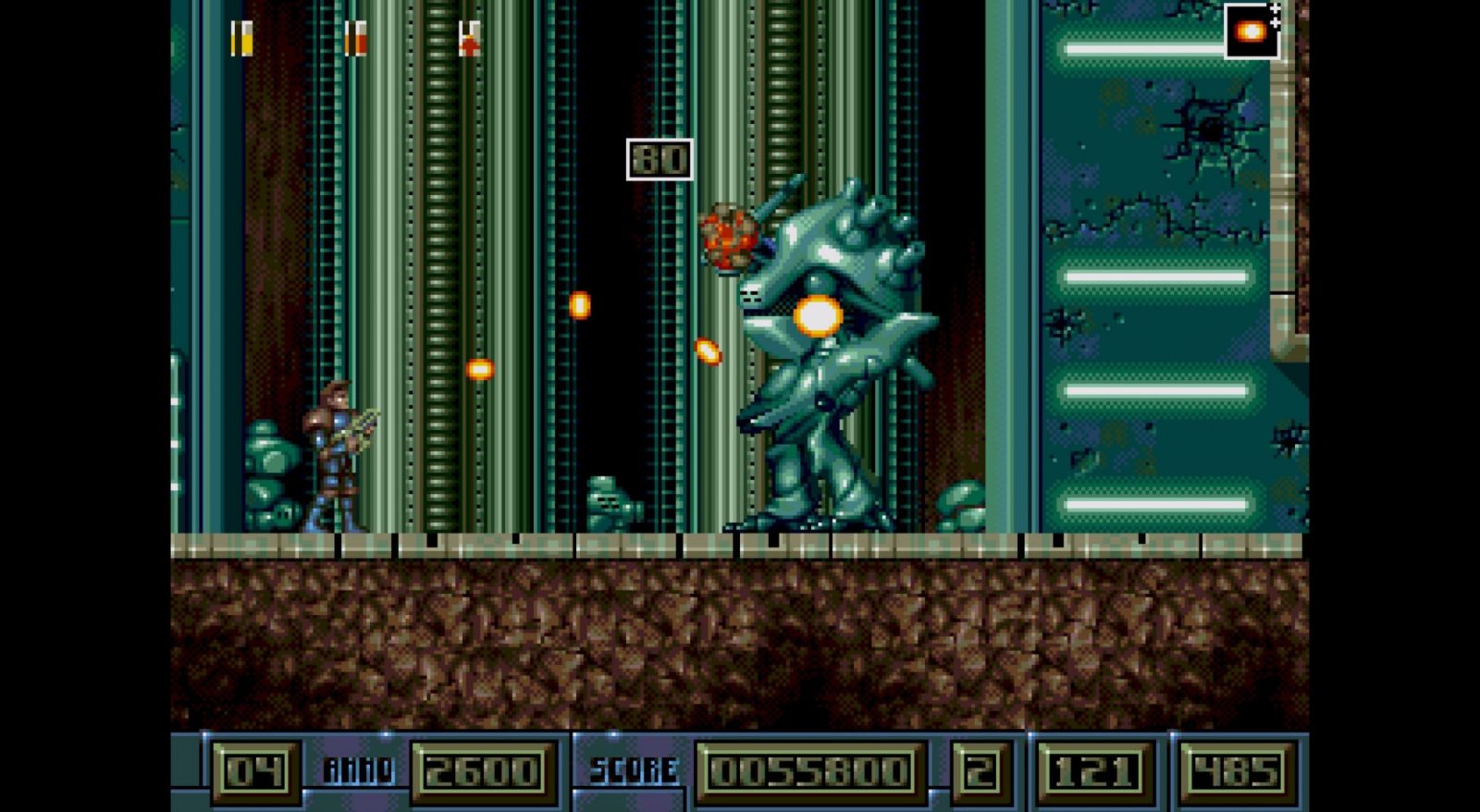 One of the best features of the game is that there’s a boss fight in the middle of the levels and at the end. The bosses have a digital health meter that allows you to see the damage you’ve done.  This is also the game’s crutch: the bosses are simple because you mostly have to learn their pattern in order to beat them, and this can often be done by standing in a safe place where the boss can’t shoot.  With no change in gameplay as you progress, the game can become rather repetitive.

Ultracore is a blast from the past game that really nails what many side-scrolling shooters were like in the 90s; and coupled with modern controls, it’s a game worth playing. Though there are a few oversights like getting hit and not knowing it, unlabeled special items, and low difficulty, it’s worth a try.

T.K. is a freelance writer, narrative designer, and author. Writing and developing narratives and giving voices to digital world and characters is his passion. As a game writer, QA game analyst, and editor for Gaming Trend, he enjoys being a part of the gaming industry.
Related Articles: Indies, Ultracore
Share
Tweet
Share
Submit