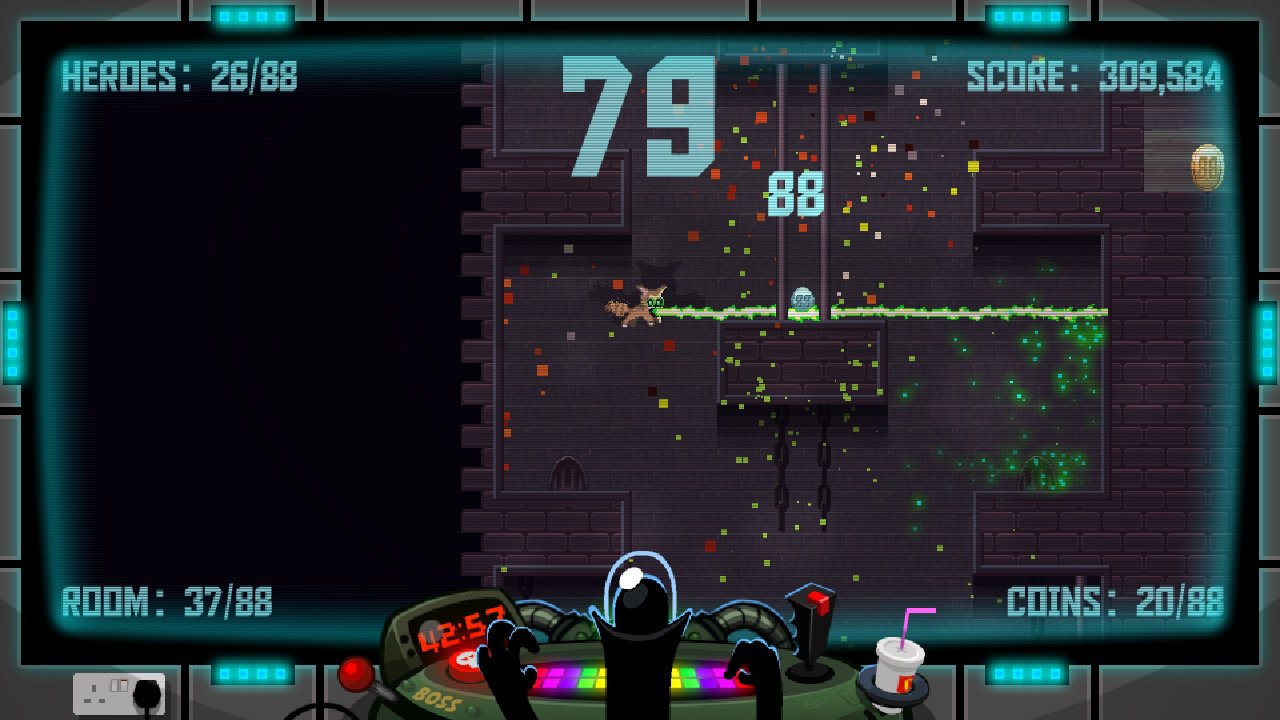 When we think of genres that have dozens of playable characters, we usually come up with fighting games or RPGs (or maybe the newest Dynasty Warriors title). However, I think we may have found a contender for most characters in a platformer, with 88 Heroes: 98 Heroes Edition being the champion. A cheeky and fun little game, this title has equal parts amusement and frustration.

A magician never reveals his secrets.

88 Heroes starts out simple enough: The evil octopus Dr. H8 requires an 88 octillion dollar ransom in 88 minutes, lest he unleash 88 missiles at earth. In retaliation, the government has a secret weapon up their sleeves: a motley crew of 88 heroes who just showed up at the call. It’s with these misfits that you must traverse 88 levels split into… 4 worlds (how anticlimactic) within the time limit of 88 minutes or else the world will explode. After heading to Dr, H8’s layer, you’ll see the action unfold through the villain’ computer monitor, where he gleefully watches the heroes fail and spits out some witty commentary should you perish. The game’s obsession with the number 8 is actually quite hilarious, and the brief storyline exudes both humor and cheeky charm.

While most platformers focus on gameplay, 88 Heroes focuses on its cast of quirky characters. They all share a universal control scheme, but each character behaves differently with their own backstory and special moves. Randomness is actually 88 Heroes’ greatest strength; with overpowered characters like Bat Bot (a Batman-esque robot that can freely hover around the stage at will) to total jokes like Glass Girl (who literally shatters if you fall from too high a height, exacerbated by her special ability of double jumping), there is no shortage of colorful personalities available. There’s also a litany of pop culture references ranging from four armadillos based off the Teenage Mutant Ninja Turtles to my personal favorite, an expy of the epic sax man meme, complete with a lawyer-friendly background track! The characters are funny and charming, and it was entertaining getting to see how each of them worked. In addition, the pixel style, while limited, does a great job in differentiating each character and their style. From the lumbering Hulk-like giants to Mighty Mite (a literal mite that is barely visible), you can tell the artists had a great time making each character unique.

Okay, Clippy expy. I get it, alright?

While the characters are all hilarious, be prepared to say goodbye to them quickly. Each of the 88 stages have a time limit of 88 seconds; spend a second more and Dr. H8 will obliterate you. Above all, you have 88 minutes to complete the game, or else you have to start from the beginning. It seems like a short game, but don’t let the time limit fool you: you will die spectacularly.

At the beginning of each stage, you’ll be in control of a random character, complete with bio and moveset should the character have a special ability. For most characters, getting hit once will kill them, and so you have to go back to the beginning with another random character. The 88 heroes essentially act as lives, and if you run out of them, it’s game over (though if you lose your last hero, you can actually retry and keep going with them). It’s also of note that each stage can be completed with every character, so perfectionists will have to stay on their toes at all times in order to remain unscathed.

While permadeath is a thing in 88 Heroes, if you lose your favorite character, you can revive them if you collect 88 coins which you can find scattered around stages or earn by destroying enemies. Once you do this, you’ll be presented with three fallen heroes which you can revive, though the selection is not predetermined. This does give you an incentive to explore the stage, since there are more valuable coins that only certain characters can get depending on the stage. Some characters, for example, are not affected by spikes, so you can grab a coin that seems to be stuck in a pit.

The level designs themselves are nothing to write home about, but are challenging overall. The first world is relatively easy, but by the time you get to the sewers, prepare to lose heroes by the handful. In fact, my first run ended in utter failure by the time I got to the second world; the character I was stuck with wasn’t too great, so it was back to square one for me. There are tons of enemies and obstacles that want you dead, and they’re presented suddenly. The learning curve is intense, and because the game autosaves after every death (though you get three slots), it can get a bit frustrating to lose your favorite character because you didn’t notice a kitty with dynamite that was hanging above you until the last second. There are boss battles at the end of each set of 22 stages, and while they’re not too exciting, they’re serviceable. After all, they need to be beatable with characters who can’t attack, so a lot of strategies are basically “Jump and make sure you don’t die”.

Don’t get too batty now, ya hear?

It’s worth noting that while randomness is 88 Heroes’ greatest strength, it is also its greatest weakness. As aforementioned, the random element is actually part of the game’s charm; I laughed at most of my stupid deaths and felt a bit guilty every time one of my heroes got pixel splattered by an errant laser or possessed toilet monster. However, it does get frustrating, especially when it comes to later levels. There’s really no way to practice a new stage until you get there, and by then you’ll have sunk in a good 45 minutes and have to restart if you fail.

This random element does get excruciating when it comes to stages that are utterly unbearable for some (though technically possible to complete), so it was kind of disheartening to lose quite a few heroes when I needed a certain one the most. The first time this happens, it’s funny. The fifth? Not so much. The levels are also static, so the only variable that really changes is what order your heroes are up to bat. Since you can’t skip ahead to different worlds, you’ll have to keep restarting. Oddly enough, however, it’s only an annoyance rather than a dealbreaker due to the length of the main campaign.

Technically this only counts as 1 hero, so LOOPHOLE!

Other than the main campaign, the 98 Heroes Edition subtitle does include some added DLC from the base game. As the name implies, this version adds 10 characters to the roster, 8 of which are protagonists from other Rising Star Games titles (notably a conga line from the recently released Conga Master Party). You might not see them all in a full run since you can only get 88 heroes per game, but it does add some more replay value. They’re nice inclusions and add to the chaos nicely. There is also a H8 mode, which are a series of 8 rooms that are sadistically hard. You get 88 lives and 88 minutes to complete this mode. You’ll need them.

88 Heroes: 98 Heroes Edition is a humorous platformer that infuriates as much as it entertains. While the colorful cast of ragtag misfits is charming and unique, you might be turned off by the quirky mechanics and odd use of permadeath.

Elisha Deogracias is an aspiring accountant by day, freelance writer by night. Before writing for Gaming Trend, he had a small gig on the now defunct Examiner. When not being a third wheel with his best friends on dates or yearning for some closure on Pushing Daisies, he's busy catching up on shonen manga and wacky rhythm games. Mains R.O.B. in Smash. Still doesn't know if he's a kid or a squid.
Related Articles: 88 Heroes - 98 Heroes Edition, Indies
Share
Tweet
Share
Submit