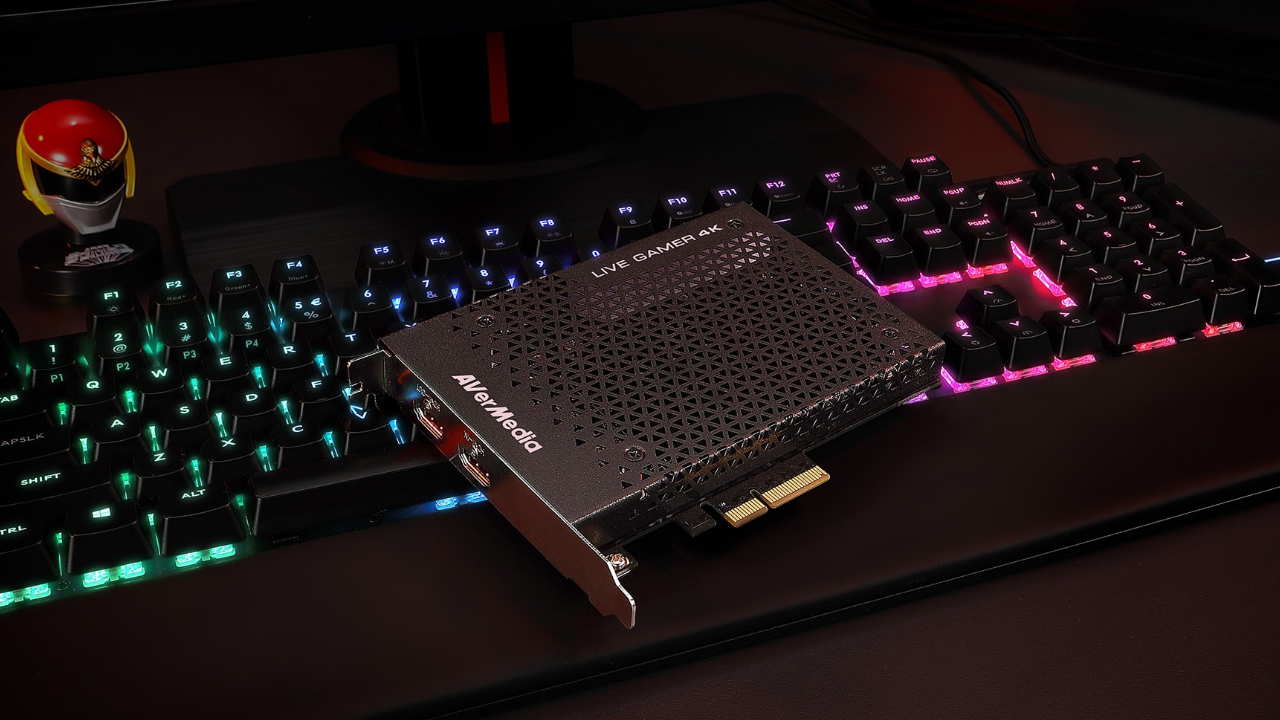 There has been a barrier since the launch of this current generation of game consoles in November of 2013. Other than the highest end commercial units on the market, there were no game capture systems available capable of capturing game output at 3,840 x 2,160 resolution (aka UHD, or more colloquially as “4K”) while maintaining 60 frames a second. Fast forward several years and a few devices shipped that could finally handle 4K at 30 frames, but advances in the color gamut delivered HDR, or High Dynamic Range lighting support, and the race began anew. Well, AVerMedia wasn’t about to sit around and wait — they decided to check all the boxes with their newest card-based capture rig, the AVerMedia Live Gamer 4K, sporting 4K capture resolution, 60 frames per second, HDR support, and a full $100 cheaper than its closest competitor.

I don’t want to be coy, and I think competition is healthy, so let’s just call it out directly — the Elgato 4K60 is the Live Gamer 4K’s nearest analog. It delivers 4K resolution capture at 60 frames, just like the Live Gamer 4K, but unlike AVerMedia’s card, it doesn’t support HDR. It makes it a non-starter for anyone looking for a perfect 1:1 capture of what they are playing, and since the Elgato solution doesn’t support HDR passthrough, it creates even more headaches as you have to disconnect it between uses.

Before we dig too deeply into the Live Gamer 4K, let’s take a look at the minimum requirements needed to run it.

If you’ve ever used a card from competitor BlackMagic, you probably had to go through several therapy sessions after setting it up to get over the pain of setting it up. You’ll be happy to know that the AVerMedia is about as simple as it gets in terms of installation. Simply select an open PCI-e slot, pop in the card, and power the system back up. The card was immediately recognized without a single issue, ready to capture once I installed RECentral 4 — AVerMedia’s included capture software suite. From cracking the case to capturing footage inside of five minutes — simple.

The AVerMedia Live Gamer 4K supports a wide variety of capture resolutions outside of the aforementioned 4K / 60fps.

Capture is supported across two codecs — H.264, or H.265, both supporting advanced audio coding, or aac — the generally accepted of the “lossy” formats, and comparable with mp3. H.264 will load directly into YouTube and Vimeo without complaint, but H.265 will not — just a word of caution. You can thank Google for that foolishness, as the far better codec is 5x more efficient. Still — when they catch up, this device will be ready to support it, giving it a bit of future-proofing.

For high-twitch games where framerate matters more than resolution, the Live Gamer 4K also supports 1080p at a staggering 240 frames per second. Very few monitors can even handle that framerate, but this card can. For high speed games like Overwatch where a split second can be the difference between a win and a loss, the more frames the better.

The Live Gamer 4K is shockingly efficient, utilizing a fraction of my available CPU and RAM for captures, even at the highest bitrate and resolutions. Even multi-streaming at those values and adding the extra overhead of the network on top of everything else barely moves the needle. During 4K capture, I never saw my CPU spike above 19%. The card was happy to use 26GB out of my 32GBs of available RAM, though I performed the same test in a second rig with only 16GB and the card adjusted nicely, utilizing 12GB and leaving the remainder for my operating system, while only pushing the CPU another 3 to 4 percent, maximum.

There is one big issue with sharing all of my capture work with you all, and that’s YouTube. Put simply, YouTube is complete and total trash for compression, and all content (other than the ads) seems to be served up on an overclocked GameBoy, and not even one of those cool see-through GameBoy color handhelds, either. That means the output that I see on my screen before I upload it to YouTube will always be better than anything that comes out the other end of their aggressive compression algorithm. There are other places I could upload the content to like Vimeo, but instead I’ll just ask that you bear the compression in mind when you view these videos below:

In this video, I showcase a few things, the first of which being that my PlayStation 4 Pro is running at 4K with HDR enabled. The first game I showcase is the recently-released Detroit: Become Human. In the video you can see the capture process, which really is as simple as clicking the giant “REC” button and letting it do its business. It fades to the capture result. Next up is God of War, where I show that I’m running it on 4K mode, prioritizing resolution over framerate. I did a software capture over the top of a hardware capture, so there’s a bit of desync issue near the end, but you can see the results I’m trying to demonstrate — the capture is absolutely flawless, running invariably at 60fps, with HDR enabled, and at 4K resolution at all times.

In the second video I wanted to showcase the simplicity of setting up a stream with multiple elements. Cobbled together with a few items I had on hand (an Overwatch Play of the Game, the Gaming Trend logo, a quick text message, a portal to the GamingTrend.com site, and naturally the video stream itself), I was able to create a reasonable streaming template with just a few seconds worth of work. You’ll notice that the video element I introduced has its own transform and audio controls, enabling a bit of audio mixing within your video stream, which is useful when you are importing other streams or items that might overpower your capture work. With all of the elements running in the background, I fired up Amplitude from Harmonix, and with good reason.

Most capture rigs introduce a noticeable amount of input lag while capturing, meaning you have to use a secondary output device like an external monitor so you can control your character. Here, the Live Gamer 4K’s power is more than enough to allow me to control the game in real time while I’m capturing, ensuring zero lag between what I’m doing and what I’m seeing. There’s no denying that a rhythm-based game is a great way to demonstrate that the input is real-time, my rust with the game notwithstanding. It’s also important to note that all of the elements on the screen during the capture are live, so I can interact with the open website, move things around (unless locked in place) and add/remove any objects at will. If you are new to alternatives like OBS, AVerMedia’s RECentral 4 does a great job of making it very simple.

At the 6:51 mark of the video above, you’ll see the same capture, but you’ll see it from the output perspective — what an observer watching your stream would see. You can see all of the elements presented as placed with zero preparation or planning — imagine what you could do with a little thought and practice.

Since you’ve seen the output, let’s dig a little further into the RECentral software.

Multi-Stream – the power of RECentral 4

I beat up RECentral in previous reviews as I had a few issues with lost streams, crashes, and other hiccups with the fledgling software. Well, AVerMedia has put a lot of work into their flagship software since then, and it shows. During testing, I encountered zero crashes, bugs, and found a lot of quality of life improvements. Let’s start off with the basics.

If you are a streamer, you are probably comfortable using OBS — it’s the de facto standard. If you are not a streamer, or you are not interested in fighting with setting up OBS, then stick around, I might have an alternative for you. RECentral’s main window is essentially split into two sections that we’ll subdivide by the two stream types — single and multi. Single simply takes whatever is being pumped through the device and captures or streams it as you see fit. In fact, if you have the bandwidth, it will even multi-stream it. This means you can send to Twitch, YouTube, UStream, niconico, Facebook, Smashcast, Mixer, Douyu.com, and any other generic RTMP stream source you can aim at, simultaneously. Better still, you can save your stream as a backup with a single click so you can use it later, even saving it at a different resolution than the one you are streaming, if you wish.

Setting up your stream is incredibly simple. Pressing the + symbol in the lower left box lets you add a device, screen capture, video, image, text, or website to your available screen space. This lets you create as cluttered or as clean a stream space as you see fit. If you want to simply put a video stream of your webcam in the corner and resize it, click the + and select device, then your webcam. Resizing it is as easy as dragging it to position and pulling at the edges to fit the needed size — RECentral does all the rest of the work for you. If you embed objects, such as a second video, webcam, or audio source, these objects have their own discreet audio controls, which is handy for balancing them out on the fly or setting them ahead of your stream.

If you are planning out an entire event, RECentral also lets you set up your scenes ahead of time. This means you can set up your intro, which may have certain specific elements, a screen which lets you show your Patreon, followers, website, webcam, or whatever else you might want to display, another that zooms in on just your game, one that lets you take a break and sets you to “away” status, and pretty much any others you might have in mind. Switching scenes is as easy as a single click, as long as you think ahead. As you can see in the video above, you can get as cluttered and ridiculous as you want, so exercise some caution…less is more.

In addition to RECentral for capture, the AVerMedia team have also included a free copy of Cyberlink PowerDirector 15. I’ve used PowerDirector throughout the years, and while it’s not nearly as powerful as something like Premier Pro, it also doesn’t have many of the completely bonkers idiosyncrasies of Adobe’s products either. The laughable hitch is that you need the current iteration, PowerDirector 16, to handle Split Toning & HDR Effect, and there’s a funny bug where it complains that you need to upgrade to compose 4K video, even though you don’t.

If all of this sounds like more than you need, or if your requirements are more portable, AVerMedia’s Live Gamer Ultra might be what you need.  I’ve also checked out that piece of hardware, and you can read the review on that device right here.

There are only two consumer-level cards worth considering that can handle 4K resolution and 60 frames per second, but only one supports HDR. It just so happens that it’s the one that is $100 cheaper, simple to use, and comes with everything you need to start streaming right away. While handling 4K/60/HDR capture requires a bit more horsepower, the results are stellar. The AVerMedia Live Gamer 4K is bulletproof.