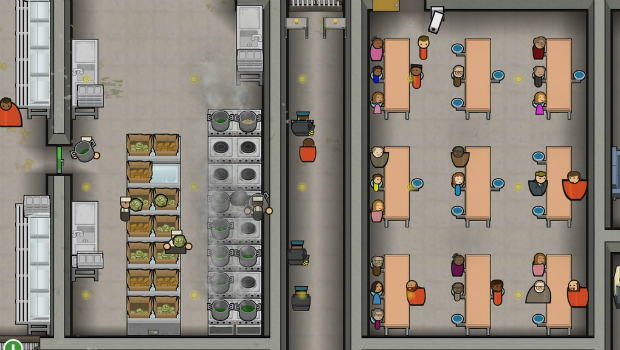 In 2011, the recidivism rate for outgoing prisoners was a gut-wrenching 43.3%, signalling the ever present failings of a criminal justice system that cannot rehabilitate.  The system suffers for putting ignorant and misguided youth both in the system and in the midst of career criminals.  I have a strong feeling that the recidivism rate of players returning to Prison Architect is higher, considering how much more fun playing video games is over being in a punishment cage.

That’s something we might learn now that Prison Architect is moving to the PlayStation 4. I know that as soon as I had the chance, I ran full force towards that sweet, sweet prison building fix.  Though everybody knows that the first hit is always the best, Prison Architect: PlayStation 4 Edition is a smooth transition onto consoles that had me running straight back to the sweet caress of institutionalization.

For those who may not be familiar, Prison Architect is a top-down prison building simulator, built around the concept of prison privatization.  You are given a lump sum of cash and some land, and it is your job to build a prison from the ground up.  There is no aspect of prison life that you do not control, from the very walls and foundations of the buildings, down to the hour-by-hour schedules for individual groups of prisoners.

An incredible amount of control comes with that micromanagement model, and that means each prison you create can be set up with minor or major differences that greatly affect how the prison operates.  Building is the major function, and you have to do every single bit of creation for the prison.  There are certain requirements for “rooms” such as a cell, a canteen, a kitchen, and so on, and once fulfilled they start operating certain functions as needed.

The PlayStation 4 version of Prison Architect is clunkier than the PC version, but that is to be expected.  There just isn’t the same amount of ease of control when you are using the analog stick as opposed to a mouse.  That said, I was still able to do most of the building with few misfires, and those new to the game shouldn’t really notice as many issues as a migrating PC player will.

The game seems to be fully intact, with all of the same items, rooms, functions, and control.  There is a new option where you can place fully intact rooms such as a cell, and this is a time saver and a huge plus considering the control issues.  Staff management is also very cleaned up from the previous version on PC, with an easily navigable menu system for both management and the addition of new staffing.

The graphics are prettier and clearer, and there is more detail in the objects, lands, trees, and filth around the prison.  The very simple design of the game is charming and looks great, with “paper cutout” style prisoners and prisoners and cartoon colors and animations throughout.  The overall background is an architect’s blueprint, which I found to be a charming addition to the game.

The biggest drawback to the PlayStation 4 version is the lack of user-created mods.  Many of these mods were fixes to the game’s problems, in particular an issue where certain objects are impossible to place facing the right direction.  Now, the game has to stay in its default state.  Players new to the game won’t really know a difference and stay in ignorant bliss.  Former PC players of the game will just have to suck it up.  It is prison, after all.

Beyond the building of the actual prison, you are in charge of the finances, the schedules, the staff, the rules and regulations, and almost every other big and small aspect of prison control.  All of this is intact in the PlayStation 4 version.  I found it a little confusing at first to navigate the menus, but after a short time I was comfortable with the layout.  The game does a better job of keeping track of “grants”, which are objectives that provide funds for the prison, than the original.  Prisoner intake is also considerably more intuitive, defaulting to zero new prisoners each day, rather than continuously bringing in the same amount each day.

If building a prison isn’t your thing, you can choose to work in someone else’s creation in the World of Wardens mode.  This allows you to enter a ready built facility and take over from there, and is a very fun way to get comfortable with the more detailed aspects of the game before you build a prison yourself.

Prison Architect: PlayStation 4 Edition brings an instant classic to console with a lot of retained charm, fun, and control. The prison builder experience is almost identical, with a few hiccups along the way, and there are major improvements with this edition that make up for the wonky controls of an analog stick over a mouse, and the lack of user-created mods. Great for returning lifers, or first time criminals looking for a great builder experience.

Patrick Rost has been with Gaming Trend since 2013. At first focused on sports coverage, Patrick has gone on to cover a wide range of games and other products for the website. Outside of Gaming Trend, Patrick writes and records music, grinds perpetually in Elder Scrolls Online (PS4), and lives day to day with his two dogs, Bob and Stella.
Related Articles: Prison Architect
Share
Tweet
Share
Submit