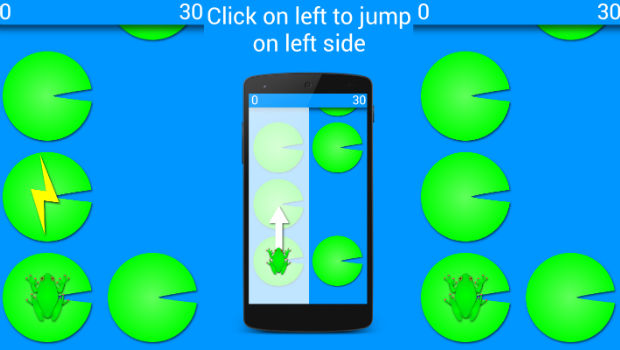 Frogs make for good video game fodder, as strange as that still may seem.  Whether in battle, or crossing traffic, or assisting a hero through time, frogs always seem to find their way into the video game annals of greatness.  Frog2Jump, a simple Android time and counter style challenge game made by 14 year old Slovenian Tim Kmecl, definitely is not going to be one of those historically great games that stick in your craw for the rest of your being.  It doesn’t have to be.  This simple little game, Mr. Kmecl’s only published work on the Google Play store, is an example of minimalism and function coming together to defeat the otherwise obvious signs of inexperience.  Frog2Jump is what it is, and it doesn’t attempt to be more than what it should be.  It’s made for the simple reason of having fun, and that’s good enough for any game in my book.

So what’s the deal with Frog2Jump, anyway?  The basic premise is one of a frog crossing a great blue river expanse, lily-pad to lily-pad, in a Sisyphean nightmare.  There is always a time limit of thirty seconds, and if the frog is still out on the river (the river being infinite and forever) when the timer hits 0, he is dead even with the safety of the pad.  The lily-pads are placed either to the left or the right side of the screen, and you have to correctly tap the correct side of the screen that the pad is on to advance.  If you hit the wrong side, or tap the screen too fast, then it’s bye, Felicia for Mr. Frog.  There are two difficulties, easy and hard, but they are really just button swaps that make the game a little harder to play.  On easy mode, you tap the left screen to go left, and the right screen to go right, and it’s a simple as that.  On the hard mode, you tap the left screen to switch sides, and the right screen to jump forward.  While it sounds simple, it really is much more difficult to play the game this way.

There are two different game modes, Play and Play Classic.  Play mode has powerups such as extra time, a speed increase, or “fertilizer” that fills both sides of the screen with lily-pads for a certain number of jumps.  This mode is a lot easier to play that the other, due to the powerups, and has more of a luck aspect to it than anything.  If you are able to get enough time increase powerups early in the game, you can get an astronomical high score even if you aren’t that good at the game yet, just because of all the extra time you’ll have to spend jumping.  The Play Classic mode is sans powerups, and is a true test of how many lily-pads you can take up residence on before the clock strikes nil.

While the game is very fun and works great, it definitely looks like the freshman effort of a young developer.  The menu is Windows Blue, the same color as the flat blue river.  The lily-pads are little green whistlin’ Pac-Men and the frog is pretty simple looking as well.  There’s nothing egregiously terrible about these graphics, but they are incredibly dull and lifeless.  There are only three sounds in the game: a plodding noise that sounds like wet feet on tile, a Sega Genesis style powerup noise, and a sad splash for when the frog meets his end.  There is also an issue where the game’s sound will cut out completely if you play too many games in a row.  Also, as might be expected, the game is thick with advertisements, and they are the big full screen ads that you have to exit to move on from.  While that is very annoying, there are zero microtransactions within the game, and that’s a trade I’m willing to make.

Frog2Jump is a starter effort for a young developer in the mobile gaming world, and it looks the part. What it lacks in design, it makes up for in excellent function, challenge, and playability. Frog2Jump is simple and doesn't try to overstep it's boundaries, but it shows promise for what this young kid from Slovenia can create going forward. This game is just as much fun as any other simple Android game I've ever played, the legendary Flappy Bird included. While this game definitely isn't going to have the impact other games of the style have had, it's well worth a download for any mobile gamer, young and old.

Patrick Rost has been with Gaming Trend since 2013. At first focused on sports coverage, Patrick has gone on to cover a wide range of games and other products for the website. Outside of Gaming Trend, Patrick writes and records music, grinds perpetually in Elder Scrolls Online (PS4), and lives day to day with his two dogs, Bob and Stella.
Related Articles: Frog2Jump
Share
Tweet
Share
Submit