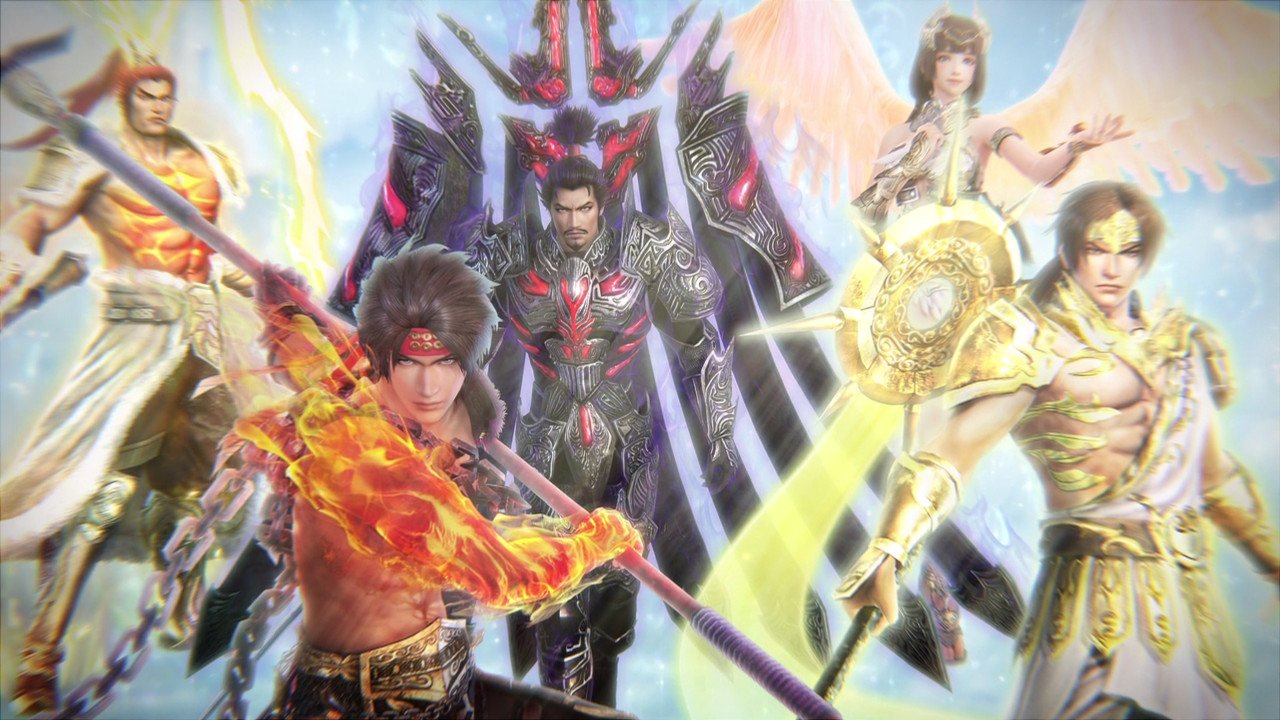 Everyone has that one series they love that gets released seemingly annually. Whether it be Call of Duty, Madden, or even Hyperdimension Neptunia, there’s always comfort in familiarity. For me, it’s the Warriors series (mainly the Dynasty Warriors set of games). While it’s characterized as a generic hack-and-slash title, there’s always some giddy joy I experience from plowing through groups of enemies as a one-man army. Oddly enough, it’s when the series delves into crossover territory that it gets to be something more than adequate; the Warriors Orochi series of titles combines both Dynasty and Samurai Warriors characters into a mishmash of apocalyptic events and awkward relationships, and it works to the games’ favor. With Warriors Orochi 4 coming on the heels of Dynasty Warriors 9 and Samurai Warriors: Spirit of Sanada, it’s an otherworldly treat for fans of the series, and a great standalone hack-and-slash for those who haven’t paid attention to the Warriors series in a while.

Hey, remember the strongest enemy in the Dynasty Warriors series? He’s in the first mission. have fun!

Let’s get one thing out the way: Warriors Orochi 3 should have been the final game in the subseries. With a definitive ending, a whole cast of guest characters (which included some representatives from the Dead or Alive and Ninja Gaiden series), and an Ultimate edition that wrapped up loose ends, it seemed like our heroes would return to their respective worlds, losing the memories of the unspeakable horrors they encountered. However, Greek god Zeus observed the actions of the characters and ended up putting them back into another world, spreading chaos by giving certain warriors magical bracelets, granting them divine powers. This leads fellow son Perseus to grab a few of the bracelets and run away in order to oppose Zeus. The story isn’t as bleak as the previous game (where everyone except three characters ends up dead or incapacitated in the first mission alone), but it’s still pretty crazy for a Warriors-type game.

The game’s first mission then puts you in control of Naomasa Li, Naotora Li, and Tadakatsu Honda, all characters hailing from the Samurai Warriors series (the first two of which debuted in Samurai Warriors 4, the newest mainline title). Here, we’re given the gist of gameplay: You’ll control a group of three characters as they roam around a battlefield, trying to fulfill a winning objective; usually it’s to defeat the main antagonist, but it could be something like fleeing to an escape point or escorting a character around the battlefield. While dying will cause you to lose the stage, there are some other objectives you must prevent in order to stay in the game, such as keeping your chief supporting officer alive. There are also bonus mission objectives that can be tricky to complete (such as defeating an officer within a time limit), but will grant some special bonuses if you are able to complete them.

Each character is separated into one of three types (speed, technique, and power), which dictates the playing style of the characters. Speed types can zip around the battlefield quickly and obtain a double-jump or dash, technique types can cancel out combos mid-attack and have a few other moves, and power types are hardy and ignore flinching from weak attacks. Each warrior has normal and charged attacks, with those hailing from the Samurai Warriors series getting additional hyper attacks. You also have your musou attacks, which are character-specific attacks you can perform once your musou gauge is maxed out. These are as flashy as always and it gives each character some dynamic flair. (Trust me, the feeling you get wiping out dozens of foot soldiers with some attacks is glorious.) Grabbing a rare item on the field will allow the use of rage attacks, which are even more powerful and grants the user a temporary power boost. A handful of characters can even undergo deification, where they can fuse with a mystical deity and transform for a set amount of time.

New to this series is the addition of magic attacks. Another gauge slowly replenishes as you run around, and once it’s filled, you can unleash attacks based on the character’s magical artifact, their Sacred Treasure. These items aren’t unique to each character (there are more than a dozen, so prepare for some overlap), so normal and charged magic attacks are interchangeable to those who have the same Sacred Treasure. However, unique magic (a special move requiring a full magic gauge and half a musou gauge) has a slight variation for each character, so it adds a little bit of a distinction to the roster. Personally, the addition of a new attack type really helped with the diversity of attacks, as now I had more to juggle compared to the usual “two-button” attack scheme of previous games. Unity magic is a generic attack, but a crowd-clearing one that gets the job done.

The Warriors Orochi games have always used a three-man cell and it is present here once again. You can select a team of three members and freely switch between them as you play missions. There is a noticeable dearth of healing items this time around, so health and musou recovery is usually performed when a character is not actively on the battlefield. This is just one of the ways the game streamlines its mechanics, and as such I appreciated the simplicity of it.

This three-man cell also encourages swapping out members as you get them, and considering the 170 different characters from Dynasty Warriors, Samurai Warriors, and characters exclusive to the subseries… prepare to try out a bunch of combinations. While the roster is expansive, you’re bound to find some unbalanced standouts in the character strength department (especially with the characters who can perform deification, as they’re people who are very important to the story). I was a bit disappointed to find out that none of the guest characters from the last game were present here (so no Ryu Hayabusa or Dead or Alive characters this time around), but with the huge roster, I understand.

While the main gameplay is mostly unchanged from previous iterations, the camp feature is a bit more streamlined. No longer is it a hub world akin to Warriors Orochi 3, but one where you can select your characters and weapons from a menu. You can also enhance characters by activating their skill trees (which can be leveled up during missions), fuse weapons for better effects, and even send out characters to train passively while you head out for other missions.  It’s not as interactive as the last game, but it’s functional and after the first few missions, I had the hang of navigating through menus and skill growth trees for each character.

The gameplay loop is satisfying, though some will feel a twinge of repetition if they’re  not invested in the hack-and-slash genre. While it is comparatively easier than previous titles in the series, there is the addition of unlockable difficulties, specifically Pandemonium (a limited-time difficulty on random stages where the enemies deal obscene amounts of damage and you can’t heal). The story campaign clocks in at around the 25-30 hour mark, with side stories extending the length. These side missions range from the familiar (I always have a soft spot for the Zhang Jiao and the Yellow Turban narrative) to the quirky (a group needs to convince one officer to join their forces, and they do so by cooking). Suffice to say, there’s a lot of replay value here.

Finally, let’s talk about performance and other features. It’s great that you can finally play co-op multiplayer again (a feature that wasn’t present in Warriors All-Stars and wasn’t added until later in Dynasty Warriors 9), and online multiplayer modes are present here as well. Related to this, the Nintendo Switch version of Warriors Orochi 4 is rather inconsistent with its performance. While it’s touted to have 60 FPS when docked, there were some hiccups on later stages, especially with mobs of people surrounding my characters. During my time in handheld mode, I noticed some slowdown when executing the flashier attacks and combos, but for the most part it was a fully functional Warriors game. It’s a shame that the framerate can dip in and out during intensive sequences, especially since games like Hyrule Warriors Definitive Edition did so well in handheld mode.

However, online multiplayer was pretty good in terms of performance, and I didn’t have any problem with it when I got into a match. There’s a battle arena, MOBA-like mode that’s a competitive multiplayer affair, but I tended to enjoy my regular co-op sessions with an online stranger instead (especially since with two people, you can split up tasks and clear out different chunks of enemies more efficiently).

Warriors Orochi 4 is a celebration of Koei Tecmo’s Warriors series, and it’s a great game to pick up for those interested in some good old hack-and-slash goodness. With its record-breaking roster of characters and some new gameplay mechanics, this is one adventure that is divinely entertaining.

Elisha Deogracias is an aspiring accountant by day, freelance writer by night. Before writing for Gaming Trend, he had a small gig on the now defunct Examiner. When not being a third wheel with his best friends on dates or yearning for some closure on Pushing Daisies, he's busy catching up on shonen manga and wacky rhythm games. Mains R.O.B. in Smash. Still doesn't know if he's a kid or a squid.
Related Articles: Warriors Orochi 4
Share
Tweet
Share
Submit