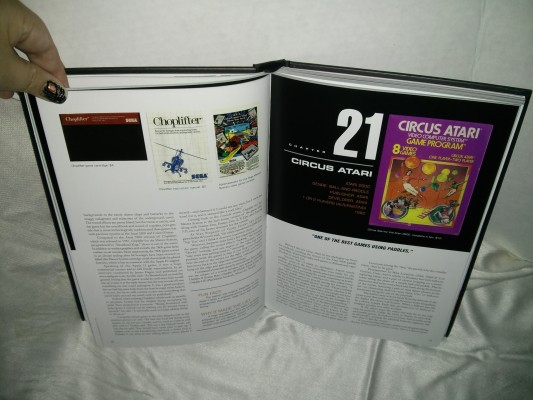 When you write a book and declare the top 100 console games of all time, it’s a bit of a sticky subject.  Top lists of any kind are always subjective, but it’s the conversation that arises from those lists that are always entertaining.  “Why didn’t you include XYZ obscure title?!” or “This list is terrible because ABC title isn’t #1!” are pretty common, but if nothing else it starts a dialogue.  Well, Brett Weiss wants to get into the middle of that food fight, and today we are taking a look at The 100 Greatest Console Video Games of 1977 to 1987.   C’mon old fogies —  let’s talk about vidya games!

The list kicks off with the game that likely started you on your console gaming path, way back on the Atari 2600 — Adventure.  In all of it’s 8-bit glory, players navigated their little square around to the White, Yellow, and Black castle while avoiding Grundle the Green Dragon (I always thought it was Grendle), Yorgle the Yellow Dragon, Rhindle the Red Dragon, and their dread master, The Evil Magician.  Imagination reigned supreme as the character was a plain square that changed color with the environment, the dragons looked like silly ducks, with swords and keys having more detail than anything else.  It was a magical time, and Adventure captured that magic for so many of us.

Choplifter ate so many of my quarters in my childhood…

The book is arranged from 1 to 100, like you’d find in a traditional list.  It feels a little backwards at first, but then I realized that this isn’t a ‘countdown’ like you’d find on the web.  Instead it’s a deep dive into some of the games that served as inspiration for the games of today, simply arranged in alphabetical order.  It avoids the “why isn’t my favorite game higher on the list” argument entirely, instead redirecting the focus on the history of these games.

Weiss doesn’t just focus on the Nintendo Entertainment System.  Instead he has a smattering of influential titles from the Atari 2600, Atari 5200, Atari 7800, Sega Master System, ColecoVision, Atrocade, Odyssey2, Vectrex, and Intellivision, as well.  What you won’t see is the the Genesis, Atari Jaguar, 3DO, SNES, and other later consoles as the focus is narrowed to the roots of the gaming world through 1987.

One of the things you’ll notice when you pick up this hardbound book is the heft.  It comes in at 240 pages, including the bibliography, index, and appendix.  Unlike other books of this type, it isn’t filled with full-page spreads of graphics and little else.  Instead, each one of the 100 selected titles has a massive background writeup, interviews, fun facts, and a full explanation as to why it made the list.  Many luminaries of our industry have contributed to this book, and it raises this from a simple list to something truly informational and engaging.

I bet all of you have played Galaga. Every single one of you.

I won’t ruin the list (you’d have no reason to buy the book!) but it put a smile on my face to see the likes of Choplifter, Dig-Dug, Gradius, Mega Man, Metroid, and Mr. Do joined by more rare games like Turmoil, Tutankham, and The Incredible Wizard.  The list is pretty comprehensive, and Weiss is so ready to start the conversation that he even published his email address in the book!  I leave it to you, the reader, to make your own judgments on where things landed on the list, but I think Weiss has nailed the subject matter here.  I consider myself a pretty well-versed old-school gamer, but I’ve learned so many things from the writeups here.

For those of us who put their quarters on the glass (or know what that means), you likely know who Walter Day is, or at least have heard of Twin Galaxies.  The man made a life out of arcade gaming and tracking the highest scores in the world.  If you want to set a Guinness World Record for a game, you’ll likely do it through Twin Galaxies.  Because of that, I couldn’t imagine a better person to handle the forward than Walter Day himself.  Even though this book is focused on the console world, so many of the games covered here also found life in pool halls, corner stores, and arcades the world over.

Somebody get this freakin’ duck away from me!

I’d be remiss if I didn’t mention the wonderful artwork in this book.  The Atari age didn’t have fantastic in-game graphics, so Bushnell and his contemporaries employed artists to create pieces of art that would evoke the feeling the developers were trying to make.  Games like Warlords were incredibly simple on screen, but the art featured a knight in full plate prepared to do battle to defend his castle.  Robotron: 2084 captured the struggle of some future-soldier battling menacing robots to save helpless civilians caught in their battle.  A lot of these pieces of art, as well as shots of the instruction manuals and bits from the game are featured throughout.  There are certainly little bite-sized bits of nostalgia in each page.

Since Weiss did encourage anyone to write in and tell him what titles he might have missed, I think he should have found a space for the Swordquest series.  Earthworld, Fireworld, Waterworld, and the unreleased Airworld were among the first action-adventure games ever made, and featured a prize for those who could finish the series worth $50,000.  This contest never made it to fruition (prizes were handed out for the first two games of the series), but there is no doubt that these games were the start of competitive gaming on some level, and thus deserving of a space in a list like this.

The 100 Greatest Console Video Games may always be a debatable subject, but there is no doubt that this comprehensive book is the greatest example of how to build such a list. The background information and interviews are eye-opening views into the history of the games that formed the childhood of my generation. Whether you are an old-school gamer, or want to understand those of us who are just a little better, this is a must-have for any collector.

Ron Burke is the Editor in Chief for Gaming Trend. Currently living in Fort Worth, Texas, Ron is an old-school gamer who enjoys CRPGs, action/adventure, platformers, music games, and has recently gotten into tabletop gaming. Ron is also a fourth degree black belt, with a Master's rank in Matsumura Seito Shōrin-ryū, Moo Duk Kwan Tang Soo Do, Universal Tang Soo Do Alliance, and International Tang Soo Do Federation. He also holds ranks in several other styles in his search to be a well-rounded fighter. Ron has been married to Gaming Trend Editor, Laura Burke, for 21 years. They have three dogs - Pazuzu (Irish Terrier), Atë, and Calliope (both Australian Kelpie/Pit Bull mixes).
Related Articles: The 100 Greatest Console Video Games
Share
Tweet
Share
Submit