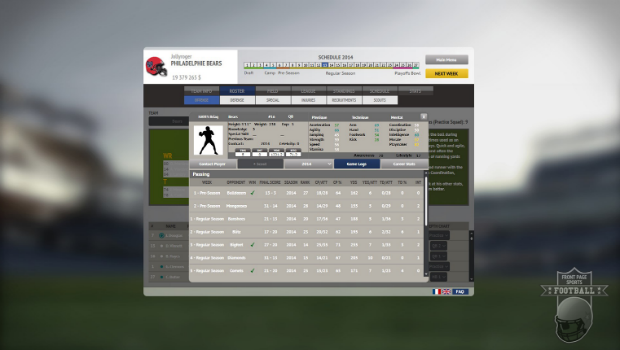 One of the appealing aspects of sports simulation games is the depth of control, stat-geeking, and overall full immersion into the strategic side of sports.  The trade-off is usually a lack of any action footage, player models, or even still photos of the games being played.  So what happens when a sports simulation game goes all in on making their 3D in-game action impressive to watch?  Unfortunately for Front Page Sports Football, the latest in the genre to emerge, the seeming focus on the action left no time to really flesh out a true strategy sim.

Front Page Sports Football is a simple to play sports simulator in the same vein as games like the Out of the Park Baseball series.  Instead of playing as the players on the field, you take the part of owner, commissioner, and coach, making all of the strategic decisions before, during, and after gameday.  During the games, you can take control of playcalling, and you get to enjoy the action on the field in a simulated game window.

The surface description of Front Page Sports Football is where the comparisons to playable games in the genre end, unfortunately.  From the very beginning screen, problems began to arise.  I created a coach named “Greg Stalls”, a strong, two syllable name that commands respect.  As the first season started I noticed that the ameteur draft was upcoming, but I could not find anything to start it.  I passed through the week after scouting a few players because nothing on screen indicated that the draft was within the first week.  As it simulated, I noticed that the draft had begun and was simulated.  I had no idea and there was absolutely no indicator to tell me what was going on.  I just had to guess, and I guessed wrong.

At that point, I began frantically looking for some way to enter the draft and actually pick the players for my team.  I could not find it anywhere.  It seemed to be nowhere in any menu, and there was no button, or flag, or tab, or anything that said “Draft Here”, or “Start Draft”, or even “This Might Be a Draft but It Might Just Be Another Roster List That Does Nothing” as a tease to what I wanted so badly: control.

Right from the beginning, Front Page Sports Football was taking away the one thing anyone on Earth would play a sports simulation game for.  Without control, I was just throwing darts at imaginary players with a hodge podge of meaningless numbers listed beside them.  I had to let the computer do the work deciding who actually joined the the team.  I already have to let the computer do the game playing, and now I’m letting it make the decisions as well?  What am I here for?

After crumbling into an existential nightmare, where I laid dormant in a field of black as an army of 80’s Apple Computers in Mike Ditka sweaters ran a football team that I owned, I awoke, cold, an indeterminate amount of time later, having simulated through the entire offseason.  I may as well have been in that thing I just made up, because the reality was just as aimless and purgatorial.  There was nothing to do.  I couldn’t seem to locate a free agent, or a trade market, or anything that resembled an off-season menu.  Just more lists of players that do nothing.

The general layout of Front Page Sports Football is a row of rectangles, on top of two squares, sat upon a gray background.  Each of the menu options brings up a few basic strategic options, like gameday planning, roster control, and player scouting.  It is all incredibly basic, and absolutely lacking in anything resembling a full game of the genre.  The only saving grace in this aspect is that it is incredibly easy to pick a team, navigate a few menus, scout the best opponents, and train your best players, and you win a lot of games.  For beginners, or maybe children, this game could be passable.  For loyal players of other games in the sports sim genre, this game is a disaster.

The only part of this game the developers seemed to spend any time on is the in-game action simulation, and it really is very impressive for what it is.  There is a standard 2D simulator that is really precise with player movement on both sides of the ball, and is incredibly fun to watch despite being a smattering of dots throwing a dot around.  The 3D simulator is even more impressive, with full player models that could pass for early PlayStation 2 era graphic quality.  As far as this aspect goes, Front Page Sports Football is one of the very best within the sports simulator world.

Front Page Sports Football lacks a license from neither the NFL nor the NFLPA.  They have creatively worked around this with a bunch of “almost” team names like the “Kansas City Arrows” and the “Indianapolis Mustangs.”  Even better are the great fake player names they used, like Indianapolis’ star quarterback Andrew “Lock.”  There are hundreds of pretty hilarious name mix-ups and strange spellings, but it’s mostly fun and isn’t a bad mark on the game overall.  I found that having the fake teams and the fake player names made editing the game to reflect real-life pro football seem less worth it.  It was fun enough to have Andrew Lock throwing pinpoint passes to legendary receiver Reggie “Wayni.”

Front Page Sports Football belongs in the obituaries on page 2. This game is a hard to navigate, depthless nightmare that will leave you questioning your actual worth in the scope of human reality. There is no way to find how to sign free agents, or trade players, or draft, or do anything outside of call the plays for the actual games. That’s fun enough, but it is far from the reason anyone has ever played a sports simulation game. The whole point is to make diminutive decisions about your teams present and future, and see those decisions work or fail in the long run. Front Page Sports Football strips you of that privilege and gives it to the computer. I do not recommend this game to anyone, except for those desperate few who have played every sports game ever and just want the game to do all the work for them.