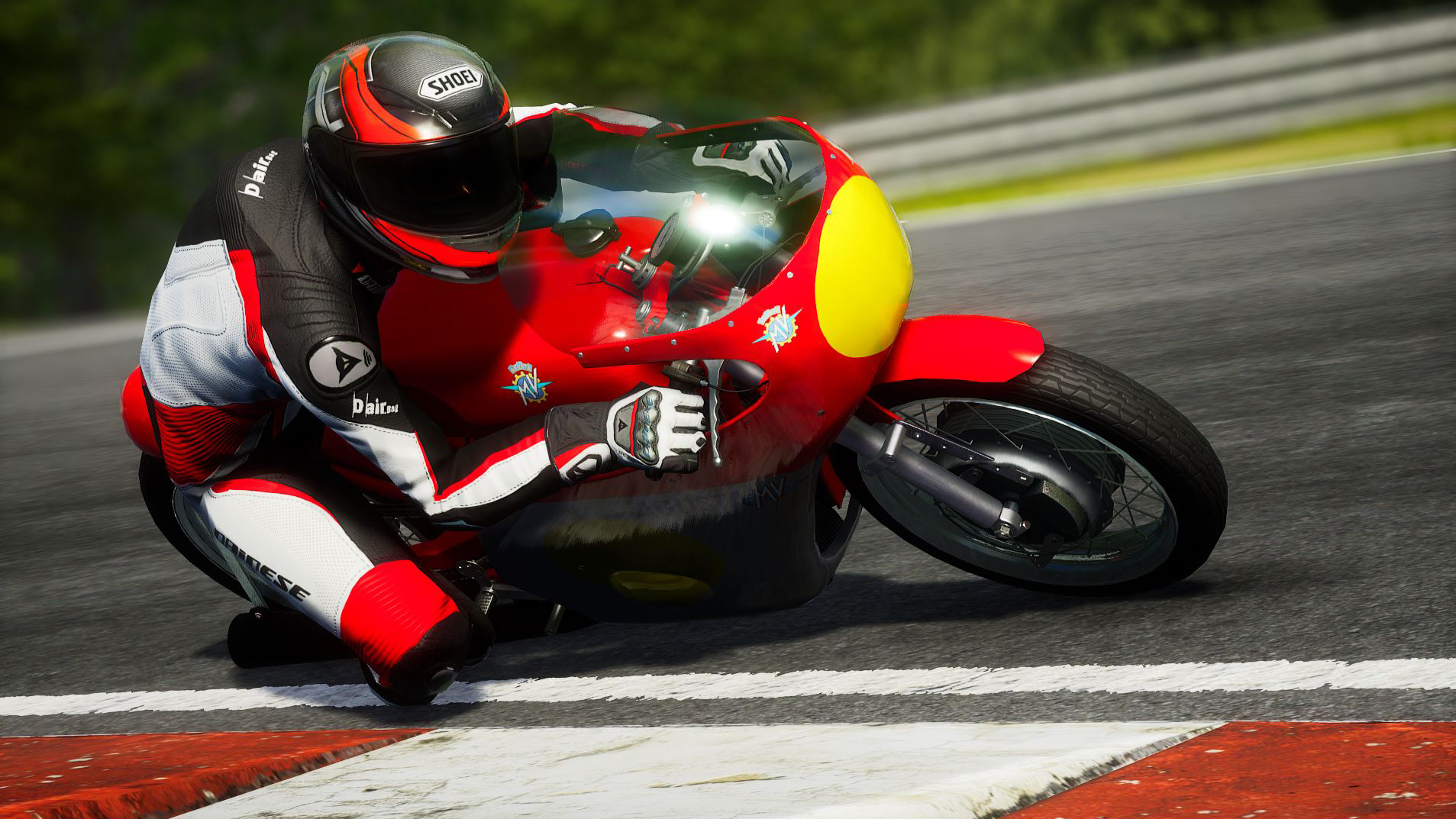 I got to sit down with Federico Spada, game and level designer at Milestone for a little hands-on time with Ride 3. We started out inside of “The House,” the main hub inside of Ride 3, where sweeping and dramatic camera angles highlight your main bike, your customizable avatar, and the other bikes in your collection. Milestone wants you to feel a connection with your favorite bike; they want you to look at your bike inside of Ride 3 the way motorcycle owners in real life look at their bikes. One of the biggest steps they’ve taken to create this attachment in Ride 3 is the ability to customize your motorcycle.

The new Delivery Editor inside of Ride 3 allows you to customize your bikes with 700 pieces of customization, as well as 100 layers which you can use to create custom paint jobs, add damage, and even apply custom-made stickers, making your vehicle entirely your own. The only real restriction is that damage can only be applied to paint jobs; you’re not going to be able to take large chunks out of your bike. I was unable to play with the Delivery Editor due to a lack of Internet during my demo, but I did get to see a collection of customized bikes, whose designs ranged from sleek racing stripes to chipped paint, and even included decals depicting pop culture icons including Homer Simpson and Pickle Rick. Between the customization videos I’ve seen and the gallery of custom-designed bikes I was shown, I’m comfortable saying that this new system will allow you to create your custom, dream bike, regardless of if it’s a replica of the bike in your garage, or a design that came to you in a vision. Combine this with the ability to share your stickers and creations online and you can either spread your creations across the Internet, or just ensure that you and your friends and teammates have matching or coordinated bikes when you jump in to play together.

“If you have the bike of your dreams, why don’t you put it in your house, so you can see it any time?” Spada questioned as he showed me around The House. His custom-made avatar tinkered with bikes and arranged items on a desk as the camera panned dramatically across the room. This time around, the bike isn’t the only thing you can customize. You can personalize your own rider, choosing between male and female body types, hair styles and colors, and an array of clothing. Your rider has a few different sets of outfits, including a casual for lounging around The House, two different street racing outfits, and a Supermoto outfit.

While not as customizable as the bikes themselves (you can’t create and apply your own stickers or patches to outfits), you are able to pick from an array of different shoes, outfit colors, and accessories which you can purchase with in-game currency earned through racing. And the customization doesn’t stop there; you can also now customize how your avatar rides their bike. From how you start a race, with your left, right, or neither foot on the ground, to how you take turns, to drop a leg or not to drop a leg, and even how you recover from a fall, you can now create your idealized rider, or replicate your own riding style.

Ride 3 also allows you to customize your physics and your loadout. There are different physics settings to make the game more accessible to beginners, while more experienced players can move to a more realistic setting in order to find a real challenge. You’ll be able to select your physics settings both in career mode and during online play. You can also adjust frame rate and quality so you can get the most out of your Xbox One X or PlayStation 4 Pro.

Ride 3 will feature 230 bikes at launch, but the roster won’t end there. Milestone wants players to find new reasons to keep playing, and the post-launch support, which is planned to last at least one year, will add new events for the career and will add at least 70 more bikes to the game. “That’s what we want from players, like the game, love it, and keep on playing it,” Spada explained.

The careers system inside Ride 3 has been revamped, and made into something quite visually appealing. You explore the career mode through events, which are laid out like bike-focused magazines, and you’ll need to complete all of the events if you want to race in the grand final. Each ‘magazine’ will feature on a particular track or bike, and the loading screens go into a great deal of detail about that bike or track, for those who care to read. “You will be able to learn more, that’s why we call this a motorbike encyclopedia,” Spada said. If you come into Ride 3 knowing very little about motorcycles and take just a few minutes to read while you play, your knowledge of motorcycles will be greatly expanded. “You can start to feel attached to that bike, to that track, to that historical moment… and you will be able to race, as well!”

Ride 3 features 30 tracks, some of which are official and some of which have been dubbed “country tracks.” Official tracks are nothing new, and they’re laser scanned to be one to one with the official race track. Country tracks, on the other hand, have been created with both reality and fun in mind. While these tracks are based off of real-world places, such as the Lake Garda track, the team has taken some liberties with the layouts in order to deliver a more enjoyable experience for players of all skill levels.

Narrow streets, hairpin turns, and AI crowding your space can make a beautiful track less than fun, so Spada and his team have altered these courses to make them more of an enjoyable track to race on. Lake Garda is breathtakingly beautiful, with babbling waterfalls, lush greenery, and stunning lighting. The easier track allows you to not only have fun, but also to drink in the beautifully rendered scenery, requiring you to battle against only one hairpin turn, instead of the multiples found in the real-life road.

At this point I got to jump into the Macau track to experience a night race, one of the newest and most beautiful additions to the game. The streets are damp, and the scattered puddles do more than make the roads slick, they also reflect light. And there is light in the darkness; from the moon to the motorbike tail lights to the neon glow of the city, this track dazzles in the darkness. Despite its beauty, the Macau track is incredibly challenging. The slick tarmac combined with narrow lanes and aggressive AI make this as difficult as it is lovely.

“Something that we really pushed, in terms of player progression, we have a learning curve,” Spada said, explaining that they did not intend for the average player to master Ride 3 in a week.” The idea is that, we want the player, through different difficulties of the tracks, to master the game in a considerable time. It’s not really that hard to get really good at a game, but it takes some time, obviously. That’s the idea, we want players to play our game. And once the AI has become completely beatable, you can still go online and play against a lot of other players. You can play against twelve players simultaneously, so that gives you an idea that you can have a lot of challenge online, as well.”

Players will be able to find new challenges beyond racing against strangers online, Ride 3 will launch with weekly challenges, where players will be challenged to score the best time on a particular track with a particular bike. The racers who score the best times will claim a spot on the leaderboard, and players will have unlimited chances to beat those scores… at least until a new week rolls around, when the challenge will shift to a new track and bike.

It’s been more than two years since we saw the release of Ride 2, but Milestone is not shying away from this. In fact, Spada was happy to talk about the gap, saying that the time between games, and the leap to Unreal Engine, has allowed Milestone to really make huge progressions in terms of quality and technology, especially where physics are concerned. Ride 3 will be roaring onto PlayStation 4, Xbox One, and PC on November 30th, just in time for the holidays.