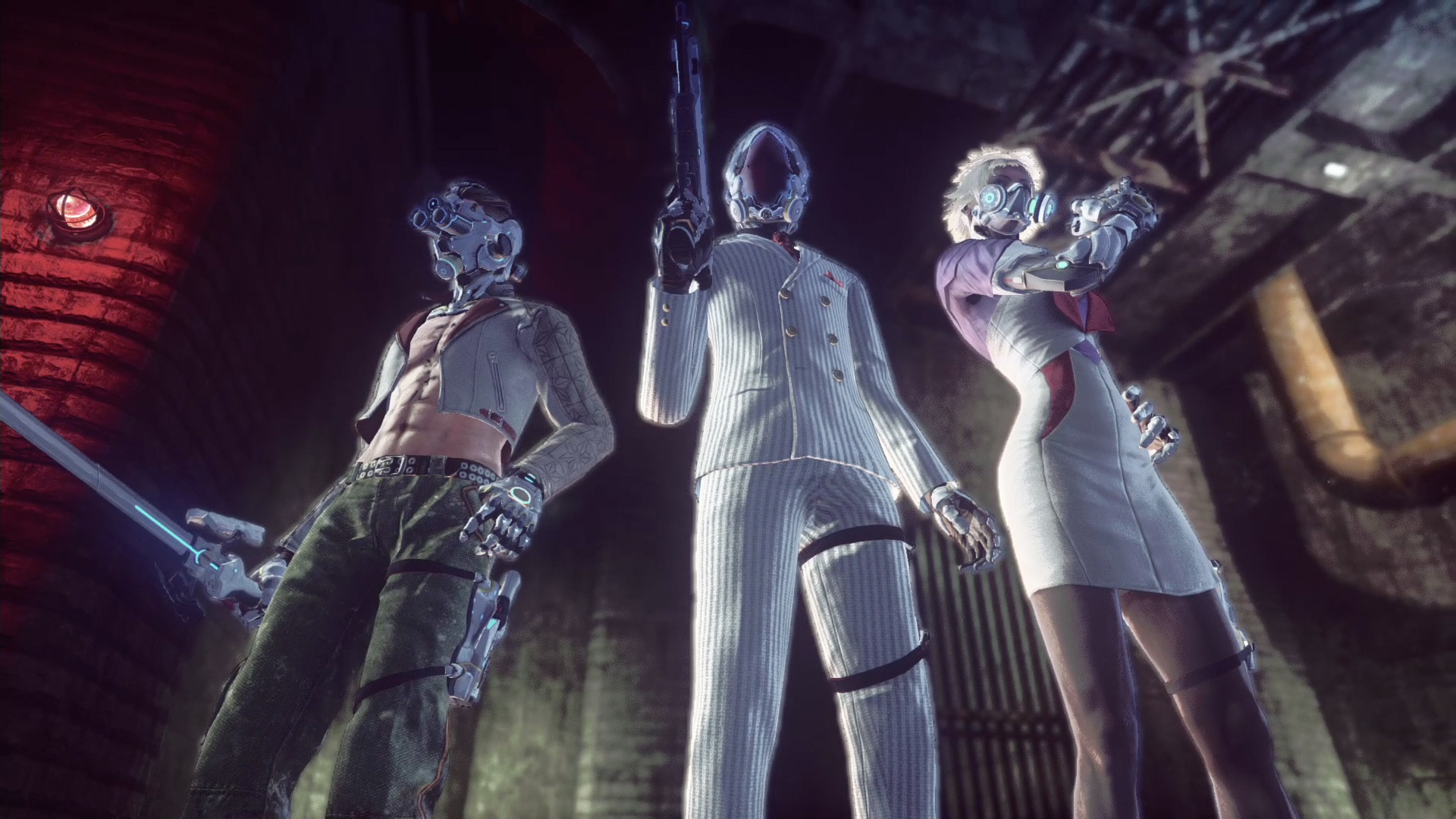 If you’re familiar with Grasshopper Manufacture (makers of Killer 7, No More Heroes and Lollipop Chainsaw), you’ll instantly recognize Let It Die for its style. The world is made up of a variety of mismatched ideas chaotically thrown together into a swirling heap of sparkling rainbow vomit (which is a real thing in this game, and apparently, common in Japanese animation). As you might expect, vomit made of sparkling rainbows is bizarrely charming, enticing and engaging. What seems like a brilliant mess at first turns out to be oddly beautiful. Now that I have you thinking about rainbows, it’s a perfect time to tell you that this is a post-apocalyptic roguelike where you’re character is fated to die . . . and die a lot. But that’s okay. As the title of the game suggests, death is inevitable. In fact, it’s necessary, and is an integral part of what makes Let It Die unique.

So, you have your rainbows and your budding acceptance of imminent death. It’s time to venture into the Tower of Barbs…Barbs…Barbs (imagine a booming voice that echoes as it fades away for dramatic effect). The Tower of Barbs, or the T-Bar as I just now nicknamed it, is where your character’s adventure begins. It is your job to conquer each floor of ascending difficulty in order to defeat the Tower. For the first few hours I played, all three or so floors were underground in an abandoned and dilapidated subway station. Dark, dank and in disrepair, the semi-open floor plan of each floor was challenging to traverse without feeling like I was always lost. I didn’t have a good sense of where I was supposed to be going and seemed to find myself at dead ends or circling back on myself. There is a map, but it’s buried in a menu kind of not helping anyone. It’s great that they included branching paths for players to explore, but so far in what I’ve played there was little incentive to investigate the entirety of each floor.

I hate to say this, because it’s the easy way out, but it’s also the most effective and the most recognizable way to describe how the combat and setting feels. It feels like Dark Souls. See, now you don’t have to read anymore. This is such a prominent point of reference that even if you haven’t played a Souls game, you still get it. Since this is a preview, however, I’ll move on to the other mechanics and describe why it feels like Dark Souls.

There’s a certain feeling of desolation one gets when playing a Dark Souls game because the enemy count is relatively restricted, and for good reason: it makes each and every combat encounter feel like a life and death situation. Let It Die attempts to capture that dire sense of gravity in its combat and setting, but when juxtaposed with the zaniness of the characters and presentation it struggles to capture the essence of either. By leaning towards a more methodical approach inspired by Dark Souls, it feels like some of that methodical nature is seeping into the overall tone of the game and dilutes some of extreme quirkiness that is such an endearing quality in most Grasshopper titles. You want more and more of the crazy characters because they’re just downright enjoyable to engage with, but the world feels unnecessarily empty in contrast.

Your home base is at the bottom of the Tower. It’s where you return to upgrade, cash in the rewards you found, and is filled with shops where you can buy and craft items. The unfortunate thing is that it is almost entirely unoccupied; however, it looks fantastic. There are neon signs hanging over the shops, a courtyard where fireworks shoot off when you use the portal to exit the game, and a couple shop owners who are expectedly eccentric. But for the most part, it’s eerily quiet with not much going on. There is no incentive to hang around and enjoy your base. Get in, upgrade, get out. With that being said, the developers have stated that later on in the game you will be able to upgrade your base in order to defend it from other players’ attacks, so we’ll see if that aspect breathes some life into it.

You might argue, “But Josh, you said it yourself. The game is about death.” You’re absolutely correct, my astute reader. I did say that. But there is a difference between using death as means of thematic progression and having the inhabited world feel dead. In this case, dead means lacking liveliness. The world feels inactive, unenergetic and unexciting, which isn’t really a positive.

This weird juxtaposition goes for the weapons system as well. A lot of the weapons you find in chests and pick up off of defeated enemies have a Dead Rising quality to them. They’re duct taped, glued and screwed together parts of anything that then become a new, fun weapon of mayhem and death. Some early ones I saw included the trusty, post-apocalyptic staple, a baseball bat with nails in it, as well as a handgun that shoots out fireworks. At one point I was dual-wielding buzzsaws. That was fun. You can find blueprints to bring back to the shopkeeper in order to craft even more unique weapon combinations. The sad caveat is that these weapons take damage and break down over time before they’re completely destroyed. Later levels will allow you to master your weapons so that they will be extremely difficult to break, but it seems like something that should’ve been left out of the game from the beginning.

I do like the combat though. It’s faster paced than Dark Souls, more akin to Bloodborne. You can equip up to three weapons--long range or melee--into each hand, dual-wielding smaller weapons or two-handing larger ones. There weren’t any shields, and I didn’t have any reason to believe there would be. (Sorry, sword and boarders.) You’re going to have an easy go at this game. Let It Die is hard. And I died a lot. A lot. If I didn’t have the luxury of being able to buy back my life with Death Insurance, I would’ve had a real tough time progressing. (Oh, Death Insurance? That’s something you can purchase with coins bought with real-world dollars. More on money later.) I’m not saying that the difficulty is a detriment to the experience, but my time spent dying may have been a bit more frustrating had I not been able to jump back into the fray so effortlessly.

Without Death Insurance, your character is perma-dead. As in, you have to restart with a new character and reclaim everything from your dead body. However, in this game your body doesn’t stay dead. It reanimates and tries to kill you. It’s an interesting twist that I think adds another layer of engagement to the game. For example, I leveled a character to 16 (because I abused the Death Insurance buy-back option). So when I decided to not re-up, and begin a new character, I was starting again at level 1--weaponless and half naked. You can imagine how I might have fared in a straight one vs one fight with my recently-deceased-now-alive body. This is where the good ol’ JRPG grind comes in. If you decide you want your stuff back--because those sweet cargo pants looked so damn good on you--you’re going to have to work for it. You know, dust off a few lesser baddies to become strong enough in order to go up against your former self. Putting that concept into writing just now made me realize that that is actually pretty cool. I was iffy on it before, but I like the idea of reclaiming what is rightfully yours in a battle against yourself. I can picture a scenario where you and, well, another version of you are equally matched but are vastly different as far as upgrades, weapons and armor. Maybe you were a stronger, tankier character before and now you’re faster and favor ranged weaponry. Two of you enter, but only one of you leaves. It feels like a weird psychology exercise and, it’ll be interesting to see how these scenarios could play out.

Along with fighting yourself, you’ll be taking on other players, sort of. Let It Die has asynchronous multiplayer. Copies of other players will populate your world as the enemies. They are the ones who will invade your base in order to gain Splithium, a valuable resource in the game, and you can do the same to other players. Having your enemies be more than just NPC grunts adds a unique layer of complexity to the experience. Enemy players’ upgrades, weapons and armor will provide a wider variety of enemies to fight, hopefully making the battles more thought-provoking and engaging.

I told you we’d get to the dough. Well, here’s the good news, Tommy. Keep your money, because Let It Die is free to play. It’s available as a download-only PS4 exclusive. This is a first for Grasshopper, and even though they aren’t charging anything up front. The developers stressed that players will be getting a full-fledged experience, and from what I’ve played, I’d agree with their sentiment. It does feel like a game with the backing of a full development studio behind it. Of course, the game has to make money so the developers can eat and pay their rent, so they’ve implemented various monetization options for players to spend money on if they choose. Remember the Death Insurance? Along with that, reward packages, some shop items and crafted weapons have countdown timers until they unlock for players to use. So, if you don’t want to wait, you can purchase coins to spend on reducing the timer countdown so that the items unlock faster. I’ve seen much worse methods of monetization, and as long as it doesn’t impede the overall gaming experience, the developers are alright in my book.

That’s that! Now, if you’re saying, “Dark Souls with sparkling vomit . . . sign me up,” that’s fine. But it’s mostly that aesthetic and tonal mismatch that has me in an emotional state of limbo. On one hand, Let It Die, in its presentation, characters and items is awesomely over-the-top. On the other, its systems are incredibly complex; its combat is brutally difficult; and at least the first few hours of its setting are a bit dry. I can’t tell yet whether or not Grasshopper and GungHo have been able to combine these very different approaches into something grotesquely beautiful. Or if they pull at each other, winding up in a creative stalemate that leaves a sense of unfulfillment. I can say with confidence that I am intrigued by what I’ve seen and am interested to find out if it all comes together when the game is released later this year.