If you’ve ever dreamed of sailing the high seas on your own pirate ship, plundering other vessels, destroying enemies, and fighting the occasional kraken, then you owe it to yourself to check out Survios’ newest title, Battlewake. I got to step up to the wheel and run a gauntlet of Battlewake’s game modes, which proved to be colorful, challenging, and entirely addicting. Check out the video above for a glimpse of what the VR pirate’s life has to offer.

You start out by selecting which character you’ll play as. Each captain has their own looks, skills, and magic. Next up, pick your ship. While the selection of captains and ships were limited in this demo, the game will launch with many more–and best of all, you can mix and match! Having both an affinity with the color purple and a yearning desire to release the kraken, I happened to choose a matching ship and captain, but it’s not required. Each ship also has its own set of stats; some are more sturdy and are capable of taking more damage, while others boast more speed or a tighter turning radius. 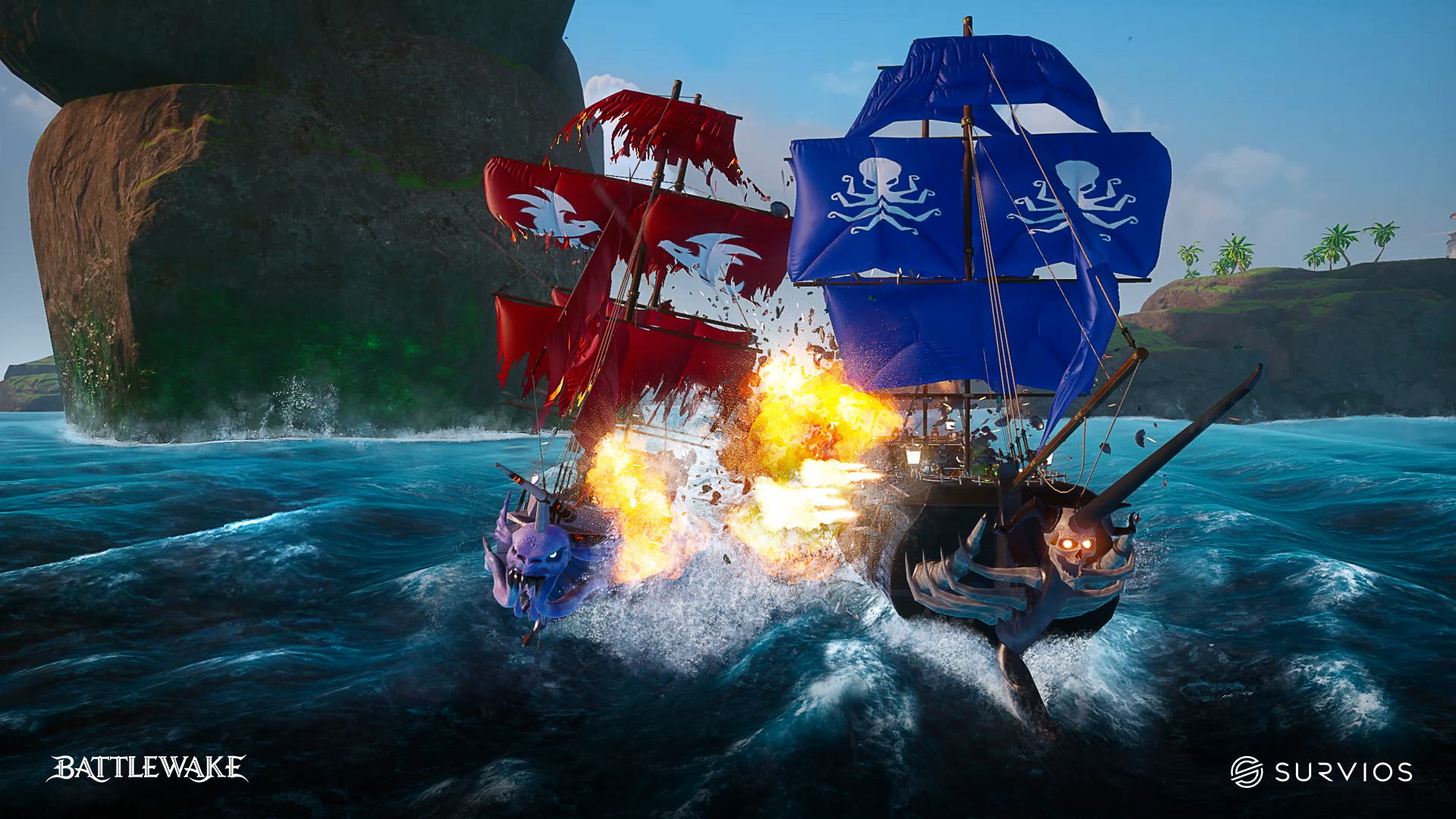 The mechanics of controlling your ship are simple, but that doesn’t mean they’re easy. Not everyone is cut out to be a pirate captain, and Battlewake will put your multitasking abilities to the test. Your hands automatically snap to the wheel just by hovering near it, and you’ll use your free hand to tell your crew where to aim and when to fire. It’s as simple as pointing and pulling the trigger, but you’re going to have to do so while navigating around small islands, avoiding enemy fire, and keeping in range of your target. Success at sea all hinges on your ability to navigate swelling waves, drop anchor to make a sharp turn, and to do all this while subjecting your target to a relentless barrage of shells and flames.

Each ship comes equipped with a set of different weapons, fore, side, and aft, which you will be able to customize and swap out as you progress through the story. I was especially fond of the flame thrower which was attached to my aft, I felt it made my enemies think twice about following too close. Your ship is also a weapon unto itself, and if you’re able to ram your opponent broadside, you’ll do no small amount of damage. The final release will feature single player, co-op, and PVP modes, so you’ll have plenty of opportunities to try out your arsenal. 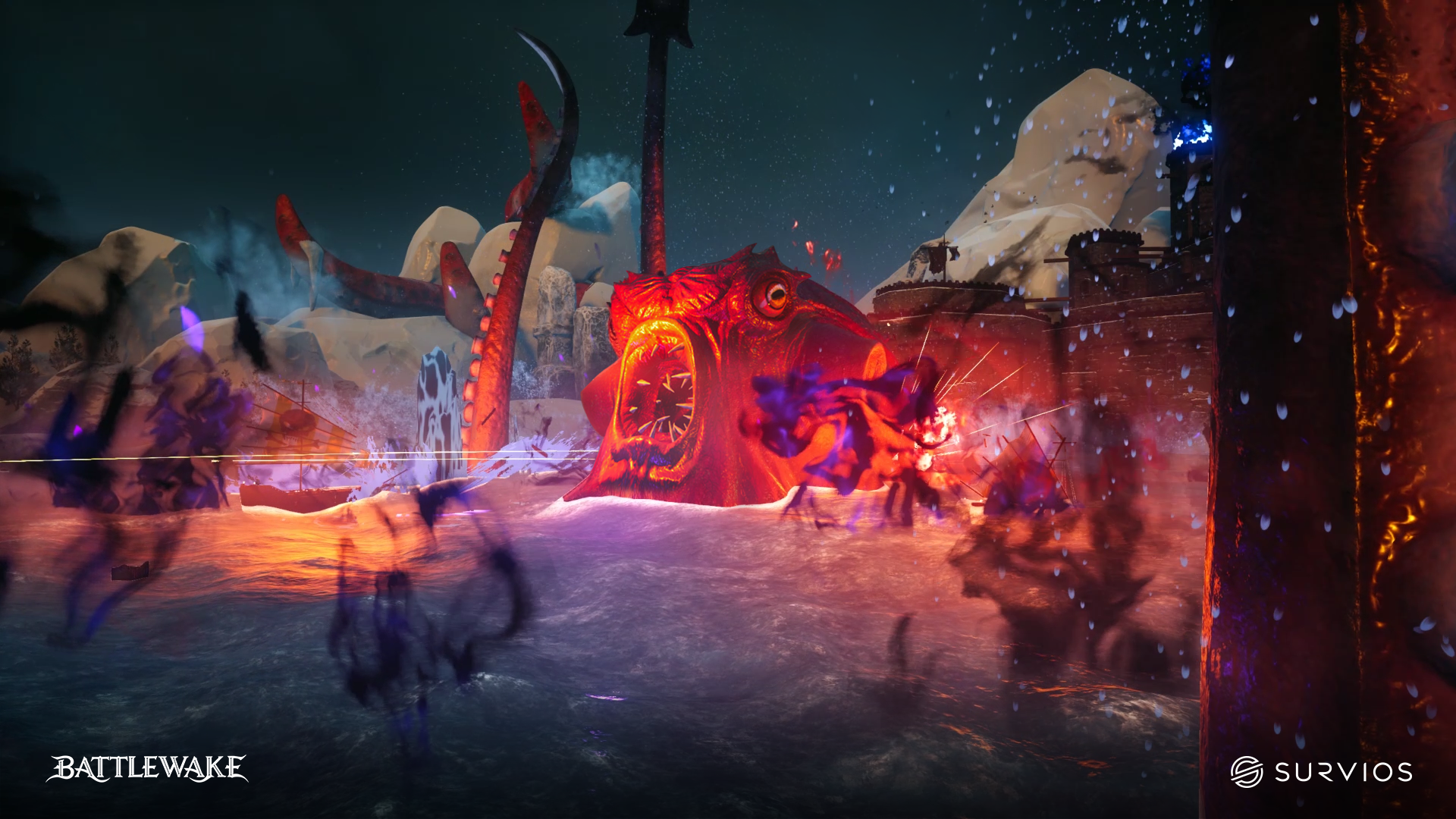 Your pirate captains also come with a set of magic spells, one with a short cooldown and an ultimate with a very slow cooldown. My kraken queen was able to unleash a tentacle which would slap the water to damage and slow any boat in its path, and her ultimate allowed her to summon a kraken to do significant damage. While most ships only come equipped with basic weapons, you’ll need to be on your guard when larger ships appear; the larger the ship, the more powerful the captain, and boss captains come equipped with ultimate powers of their own.

A full release of Battlewake will launch across Survios’ arcade on July 1st, but those hoping to bring the high seas into their living room will have to wait a bit longer. Battlewake will be coming to the HTC Vive, Oculus Rift, and PSVR in 2019, but the exact date has yet to be announced. Visit Survios’ site for more info on Battlewake, add it to your wishlist on Steam, and be sure to check out the rest of our E3 coverage to see more hands-on gameplay from the convention floor.