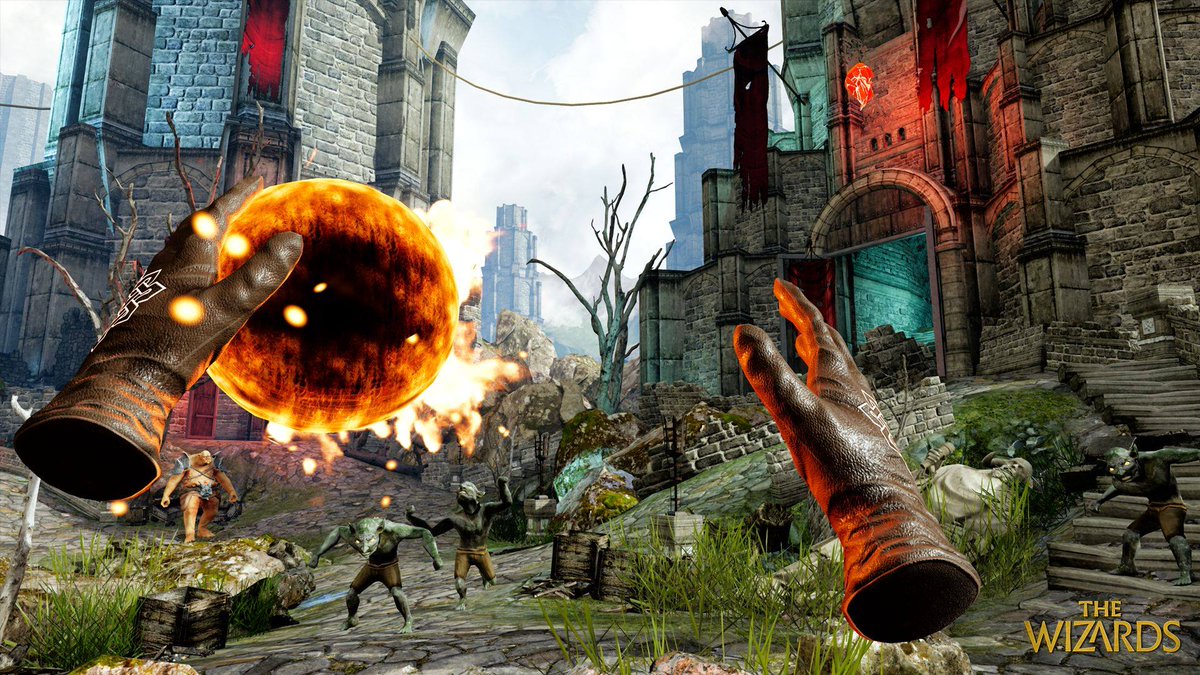 The power fantasy of being a wizard is the sort of thing that convinces you to buy a VR headset in the first place. Carbon Studios, the team behind Alice VR, are back with a new game jumping into the Early Access pool entitled The Wizards. While it’s still got a little bit to go to cross the finish line, even in this early state, I came away far more impressed than I expected. Let’s embrace the power of magic and check out this first build of The Wizards VR.

The Wizards is set in the Realm of Men, where the protagonist is tasked by a wizard predecessor to travel through time to learn the elements of magic necessary to save the world. How? With magic, of course!

Your character starts off with a few very simple spells. Pulling a trigger to close my fist, arcs of power emanate from my right hand. Flipping it over, a concentrated ball of fire appears in my hand, ready to lob at my foes. Closing both hands and criss-crossing them brings a Frost Bow into existence that fires ice arrows from the quiver on my back. As your magical power grows, new spells are unveiled to you, eventually granting powers from all four elements, as well as a magical shield that can deflect projectiles, and powerful arcane shards that can strike multiple foes.

The first area of the game takes place in a sleepy hamlet called Pinewood – a small town adjacent to a ruin. Using our power to travel back in time to explore the ruins, we hope to restore it and stop whatever wrecked it in the first place. Paradox aside, after a few teleports it becomes abundantly clear what wreaked havoc on this town – orcs and other evil creatures. As the lumbering beasts bear down on us, it was time to unleash some powerful magic to stop them. Fireballs and ice arrows win the day, after a tense battle around a protected magical, but corrupted, shard of power. As beads of sweat gathered on my furrowed brow, I managed to finish the first level, as you can see below:

Having reached the edge of the town of Pinewood, the second level is more a wave battle than the exploration of the first level. Standing in one area, I used the magic I had learned — fireball, Arcane Shield, and my Frost Bow to dispatch four wave of lumbering giants. By doing so, I had progressed far enough power to gain another spell — Lightning.

With a quick lesson in casting, I was ready to unleash bolts of raw elemental power from both hands. Entering level 3, I was in the same area as level 2, only now I had to contend with fast-moving goblins and creatures occasionally arriving with elemental magical protection. I ripped down fast moving goblins and roasted shambling orcs with reckless abandon, countering whatever elemental shield the enemies had with its opposite.

The enemy began taking my threat more seriously when I entered the fourth and final level of Pinewood. Bringing in some sort of goblin airship, the enemy now rained down foes into random locations, using drills to open the ground for them to surge out. Unleashing my freshly-learned Arcane Shard and Pyroblast spells, I dispatched my foes in a nearly flawless round. I’ve never felt so badass in a VR game as I did at the end of Pinewood.

At this point, the narrator informed me that I have learned all of the basic spells. By this point, I was able to not only fire off spells quickly, but also switch between them without too much difficulty. The motions worked the vast majority of the time, and my only complaint came from the occasional arrow that steadfastly refused to connect with its target. I feel like a quick demonstration of the basic powers is in order.

As the narrator said, these are the basics. I can cast simple spells, yes, but my foes are getting relentlessly more powerful. Performing well in the areas (and you can go back and retry them with new powers for some added replay value) yields upgrade points that can be used to expand the capability and utility of your spells. As an example, lightning that could only be aimed at a single target before can obtain a chain-lightning quality, allowing the elemental power to arc to nearby foes. Similarly, the ice arrow can be upgraded to spray a mist of frost that slows any enemies that come near it, or Pyroblast can be boosted to leave a smouldering fire field behind that enemies any foes foolhardy enough to trek through it. Below you’ll find a quick look at the upgrades available in this current build:

Beyond the replayable levels in the game, there is also a mechanism called Fate Cards that encourage continued attempts that can yield additional spell upgrades. These Fate Cards put a slick spin on those attempts, offering up modifiers like foes with haste (which yield an additional 25% point bonus), tougher foes with more health, and more. If you are struggling, there’s even a card that’ll slow enemies down a bit. It’ll be great to see this mechanic expand, as well as the greyed out Arcade mode.

Most games in Early Access have little to no realistic project timelines to reach from where they are today to a point where they could call their efforts a “full release”. As this is not Carbon Studio’s first rodeo, they’ve already released not only a timeline, but also what features will come with their frequent updates. The game already features two regions of the story mode, six spells, upgrades, fate cards, and online leaderboards, but over the next 6 months (the maximum length Carbon intends to stay in Early Access), they intend to add two more story chapters, new challenges and enemy types, the aforementioned arena battle arcade mode, new Fate Card modifiers, and six more powerful Master spells to truly make the player into a badass wizard.

The second area in the game, the Healand Mines, awaits me. Who knows what evil lurks in the darkness there? Unlike my reluctant narrator, I couldn’t wait to find out. Stay tuned for a second feature as we plumb the depths of the mines.