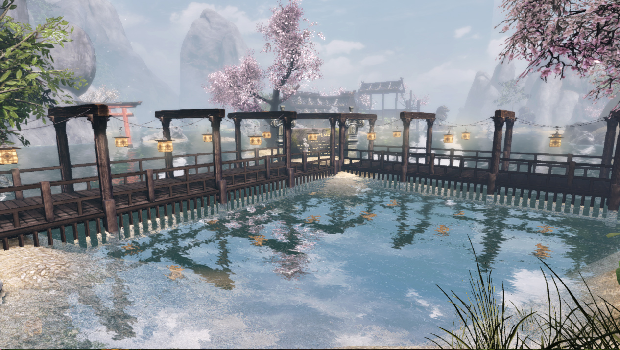 “It’s really more of a stop and smell the roses kind of game,” Xing developer John Torkington told me as I clumsily slipped on the Oculus Rift and headphones. Even at the menu screen, I was teleported to a totally different world.
I’m sure Torkington noticed my hestitance as I spent my first 60 seconds of play with my hands hardly on the controller as I just moved around and looked at the beautiful game world. Gorgeous three-dimensional visuals and an amazing atmospheric soundtrack make it easy to lose yourself in the simply beautiful world of Xing: The Land Beyond.
In the game, you play as a spirit jumping between different lands, solving puzzles, often by controlling the elements, and activating gems in order to progress. The gameplay is simple and at times feels like an “escape from the room” style game where all the ingredients you need for a solution are in front of you, it’s just a matter of figuring out how to put those simple pieces together to solve the puzzle.

The time I didn’t spend admiring the environment in Xing was mostly spent activating switches and solving block-pushing puzzles. The gameplay and exploration in Xing: The Land Beyond obviously draws from older Sierra adventure games like Myst, but obtuse puzzles are replaced with obstacles that enhance the overall experience instead of hindering it.
I’m sure many people will debate over whether XING: The Land Beyond is a “game,” and many articles about the project will be punctuated by “more-art-than-game” statements, but from what I’ve seen, anyone who appreciates a good adventure in a vast and beautiful world won’t miss a chance to walk through the magical world of XING.