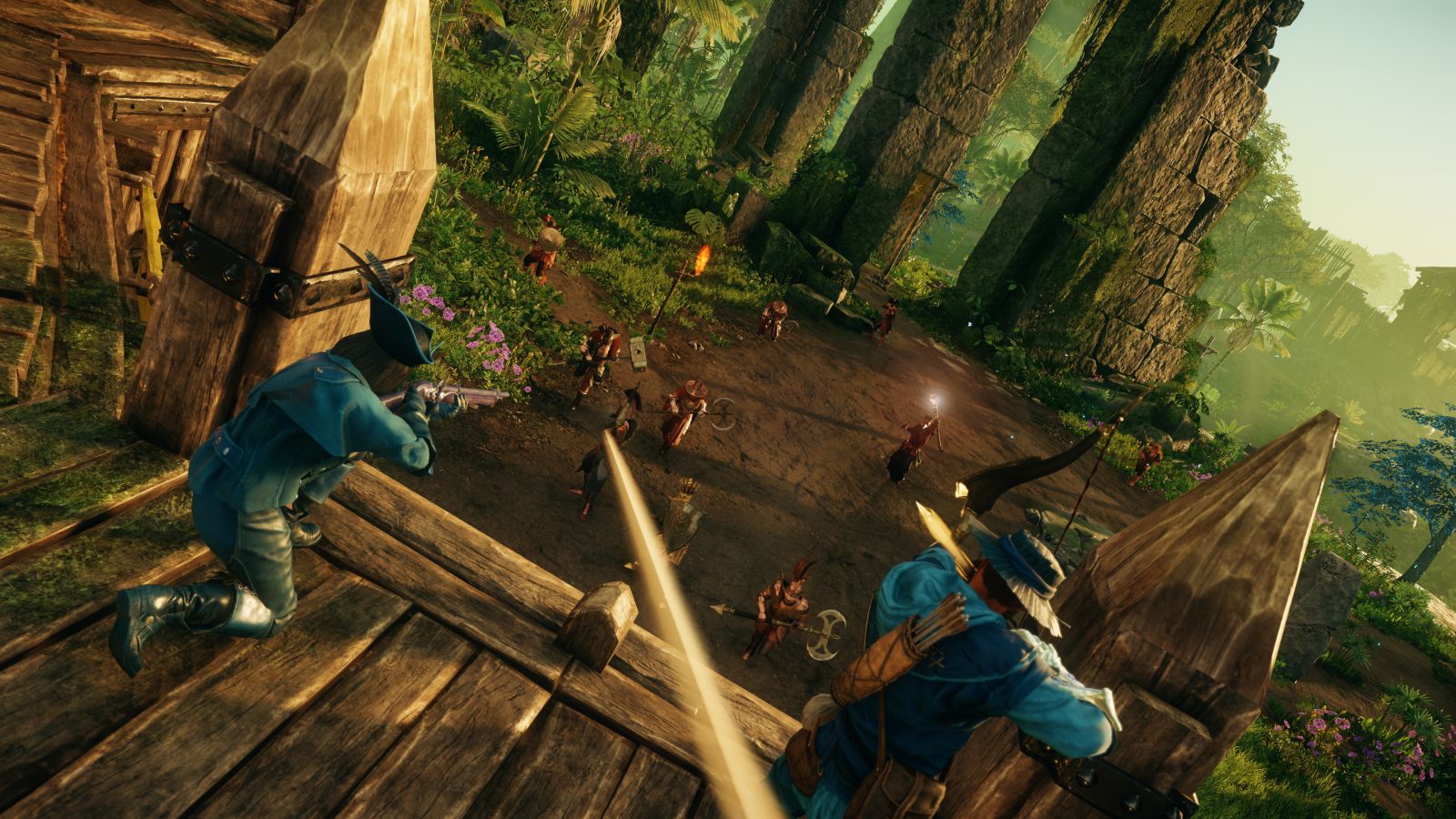 How in the world do you preview an MMO? By their very nature, massively multiplayer online role playing games are expansive and full to the point of overflowing with choices. Developer Double Helix Games and Amazon Games, after several delays both large and small, are almost ready for all of us to enter the world of the early 1600s, and we’ve had the opportunity to revisit the game, only this time we get to see two examples of endgame content. First up was Outpost Rush, followed by an end level dungeon for a team of five. 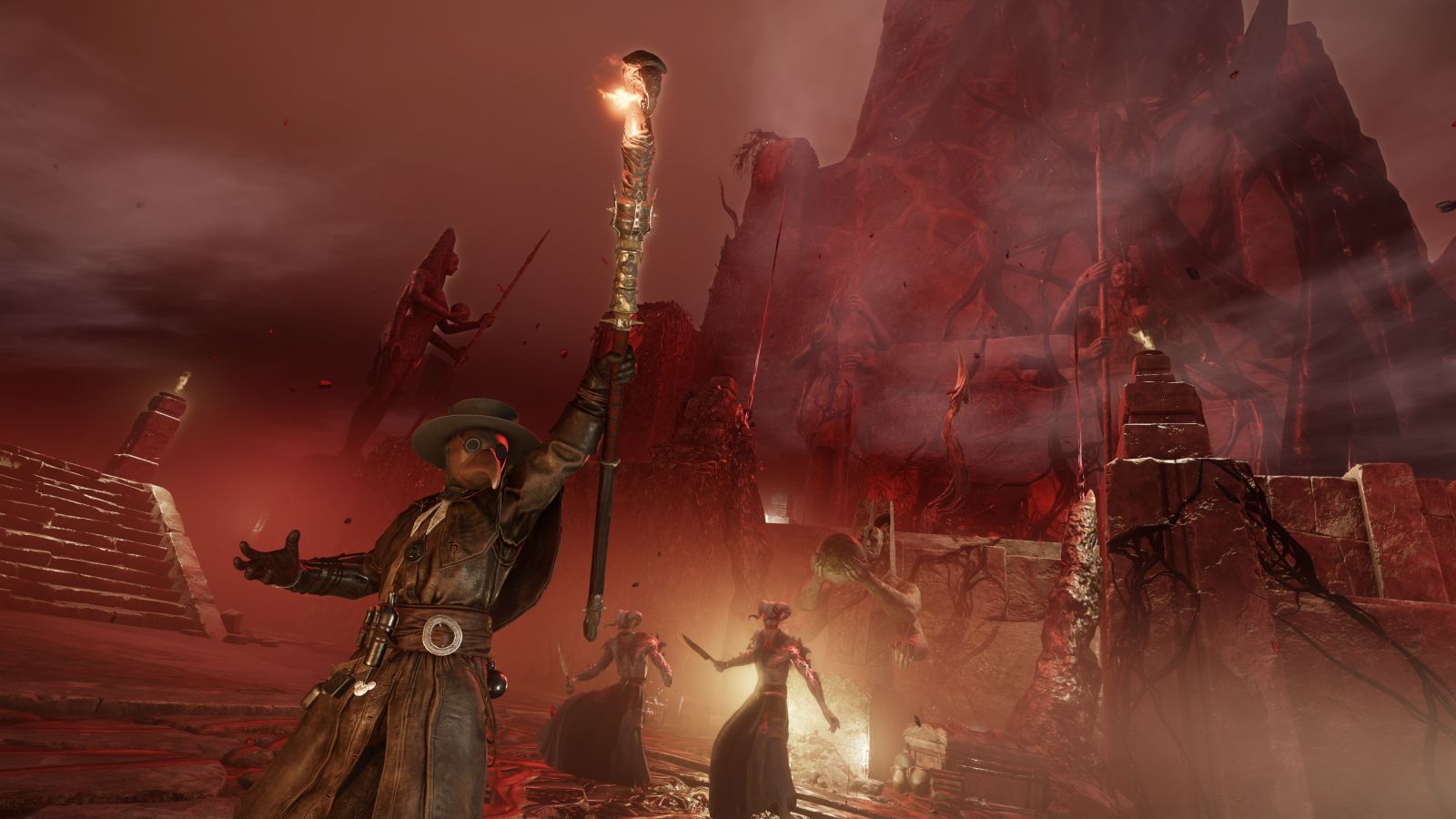 Outpost Rush is a 60 player PvP outing that pits two sides against one another as they fight it out to capture the enemy outposts. Essentially a capture and hold mode, you’ll have to hold the majority of the three as you push to reach 1000 points. But, like many things in New World, there’s a twist.

Your outposts are generally basic structures with a handful of defensive embellishments. When I say basic, I mean they don’t even have gates on them. To build and expand the offensive and defensive capabilities of the structure, you’ll need to spare some of your soldiers to head out and gather resources. These allow you to build sturdy gates, bolt throwing emplacements, siege weapons, and a whole host of other improvements to help you hold the line against your foes. It provides another layer to a well-established mode. Do you ignore your outpost and pour all resources into an all-out assault? Do you hold the bulk of your troops back to harden your emplacements and build weapons that could help with a forward attack later? Do you try to balance both? It’ll be interesting to see how this mode plays out. 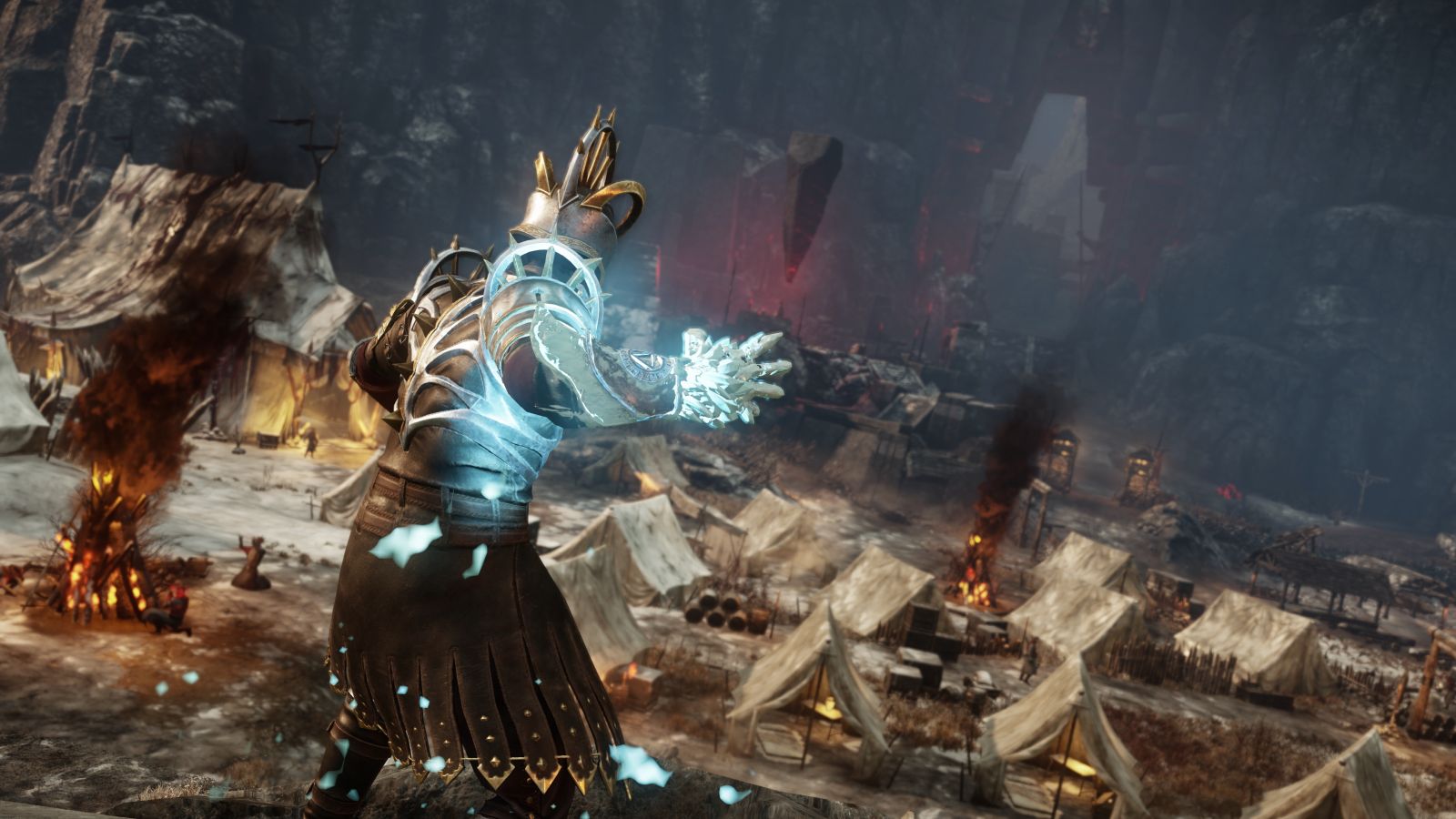 While you are out and about scrounging for resources you’ll also encounter creatures defending those materials, introducing a PvE aspect to tackle. Scattered throughout the level are also summoning stones. When activated you can summon a massive bear to your side, giving you additional advantages in battle.

The entire time your team is bombarding the enemy, the clock is also ticking. In this particular outpost rush, the ghost of Baroness Hain, a ghost who now haunts the island, lurks. She will eventually manifest and engage both teams. The group that slays her will gain a powerful defensive buff, but more importantly it will freeze the enemy team’s march towards the 1000 point goal for a period of time. She will respawn periodically, so you’ll have additional opportunities should you act quickly and decisively enough.

The second half of our final session before launch was dedicated to a five person team dungeon entitled The Lazarus Instrumentality. This ancient magical site is a level 60 endgame dungeon. In it we had to team up to find ancient azoth glyphs to shut a magical portal. Unfortunately for us, a whole host of undead had other plans. We did our very best, but as is often the case when you are “jumped” to an endgame level, we had little experience with the characters we were using, and it showed. Several wipes later, we finally reached our very first boss.

Cilla, a medusa-like beast, blocked our way to the interior of the dungeon. Without any hints from the team we tackled her and almost dropped her thanks to some solid coordination. Unfortunately, she has a mechanic where downed players that aren’t revived quickly enough respawn on the opposite side of a bridge leading up to her. With a full party wipe behind us, we took some advice from the team on our next attempt. Cilla stacks power, culminating in attacks that can one-shot all but the most hearty of players. Disarming this charged assault means paying attention to the environment, and diffusing her power by shutting down a nearby magical conduit.

With Cilla finally dispatched, we plunged further into the dungeon only to be halted by magical puzzles and barriers. Time and time again we encountered new mechanics that would divide the team and otherwise shake up a straightforward dungeon. It keeps you on your toes, and it ensures that these dungeons aren’t going to be blown through in a weekend.

Unfortunately, the biggest boss of all hit us and stopped us in our tracks — time. Our all-too-brief look at the endgame of New World was coming to a close. What we saw was encouraging, and the rest of the press members in attendance agreed — what we wanted was to keep playing, and that’s a good sign. The great news is that, if you’ve pre-ordered the game, you’ll have the chance to try it all for yourself. By the time you read this on July 19th, you’ll only have a short 24 hour wait to jump into the closed beta on the 20th.

Only a month away, it’s very exciting to finally get our hands on New World. It looks like the delays for this game have done great things for the overall polish and variety, and additional PvE content will interest folks like me who are happy to mine and craft our way to happiness. New World could be the MMO we’ve been waiting for, and I couldn’t be more excited to get back into this fresh take on the genre. 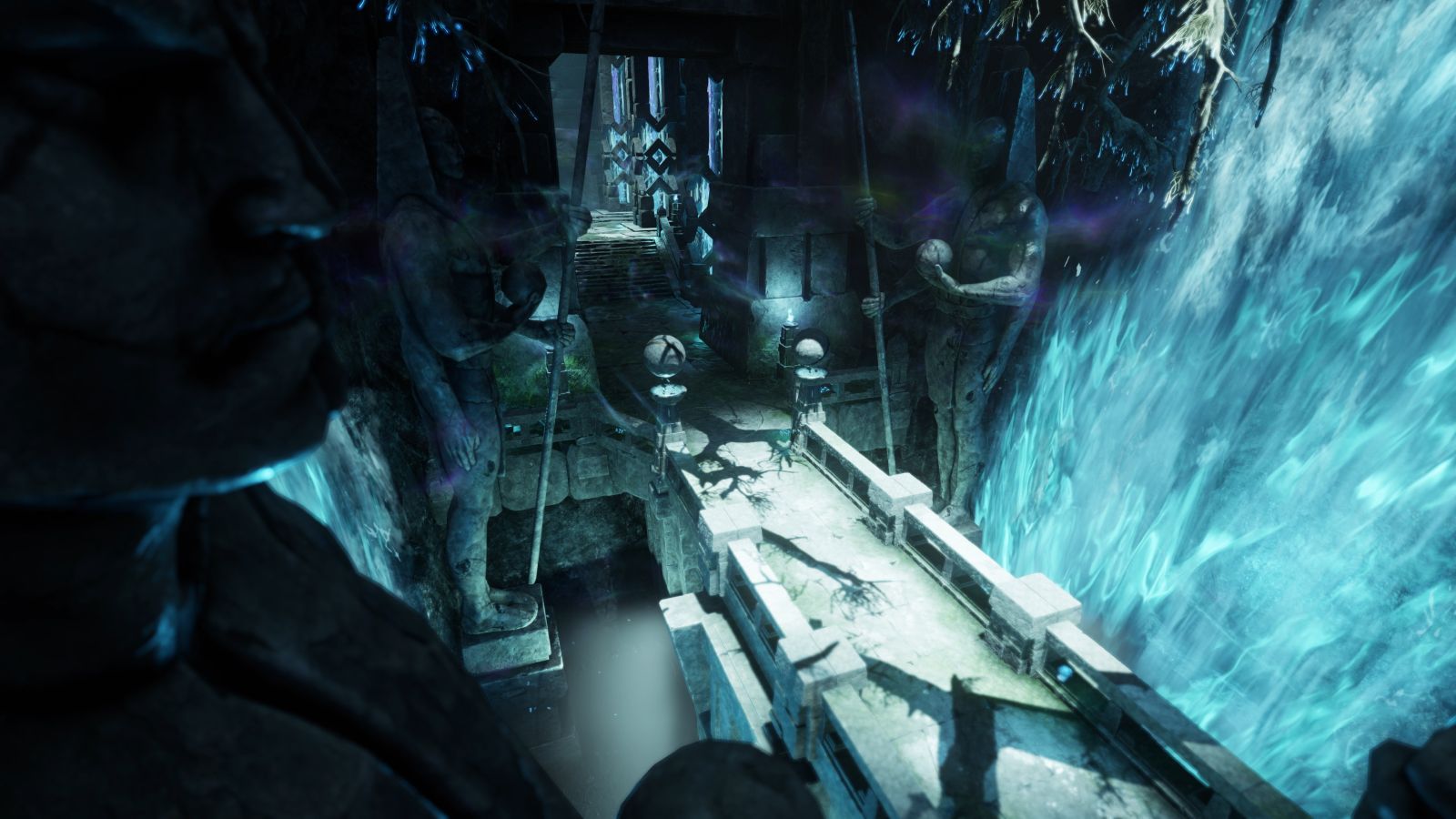 New World is coming to PC on August 31st, 2021. Stay tuned right here for more information and our review of the full game.