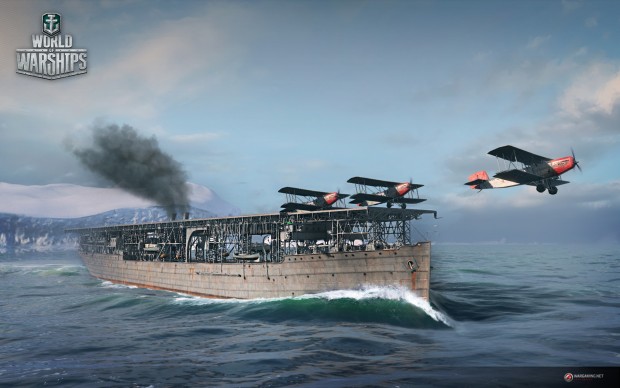 The first time you play World of Warships, it seems like forever before you see an enemy ship.

The ocean is a vast and empty place.

World of Warships is the upcoming Naval MMO from the F2P masters, Wargaming. Their freshman effort, World of Tanks, continues to be, by a very large margin, the largest MMO on the planet with over 75 million subscribers.  Their most recent effort, World of Warships, has just had its second closed-beta weekend, and after a long wait, we can finally tell you all about it.   (NOTE:  The following preview was from the 2nd Beta weekend)

The setup for World of Warships is very similar to World of Tanks or World of Warplanes.  Period-specific and historically accurate ships are divided up by nationality, further broken up into tiers of power.  At this stage of development, that means powerful naval vessels from Britain, America, the Soviet Union, Germany, and Japan.  Aircraft carriers in scout support roles, battleships unleashing hell from afar, and light destroyer skirmishers draw down on unprotected and slow cruisers is the promise.  But does it deliver?

The first thing we noticed is that the maps are large.  Inordinately large, in fact.  Moving a 10,000 ton aircraft carrier isn’t something you do quickly.  Any thoughts that the game might be ‘slow’ evaporated quickly as you close distance and engage.  Unlike World of Tanks or World of Warplanes, the incredible power and range of some of the larger vessels in World of Warships means you are likely in range of someone at all times.

The classes of ships are as straightforward as you might imagine, though, much like World of Tanks, there is a world of complexity and strategy just under the surface.

Destroyers are the quickest ships in a straight line, but that narrow profile makes them a beast to turn.  Their torpedoes are absolutely lethal, even to large ships.  Equipped with a smoke screen, they can also provide obfuscation and additional anti-aircraft capabilities to the fleet.

The battleship is a behemoth of angry steel with incredible firepower, range, and able to withstand more punishment than any other craft.  Anything they hit is devastated, but their massive frame offers up a large target for faster-moving destroyers and their torpedoes.  Putting a destroyer in the middle of the map is an immediate death sentence.  That said, being on the other end of their massive deck guns is often just as fatal.

Cruisers are a skirmisher class, balanced between the massive power of the battleship and work best in a group.  Their smaller, but faster-to-reload guns cause constant harassment, and volleys from their deck mounted anti-aircraft guns make life difficult for carriers.  Of all the ships, this is likely the most difficult to master as it requires understanding of literally every other role in the game to be truly effective.

Fire on a ship is so much worse than you think

Carriers are an interesting twist for the series.  Not a direct assault craft by any means, the carrier is capable of launching squadrons of planes with various functions into the field.  Certainly, those planes have the ability to strafe and torpedo other ships, but that’s not the strength of the carrier — it’s line of sight.  Naval battles in the real world are often carried out over incredible distances, but line of sight is necessary to guide your volley to its destination.  Carriers offer greater visibility, spotting ships lurking on the edges of islands, grouping for an attack.  Their ability to remove the fog of war allows battleships to train their massive guns on targets otherwise impossible to spot.  Since their planes have an unlimited strike range, they can chase a crippled ship and sink it before it can limp away and repair.  While much of their gameplay time is spent in the tactical map, they are a vital weapon.

“The only easy day was yesterday” – Navy Seals

Those who have played World of Tanks know that repair kits are crucial to surviving engagements.  Those kits are used to repair specific locations in your tank, and are a single-use item.  World of Warships takes a different approach, allowing you to repair multiple times with a cooldown timer instead.  Once a ship has become damaged or has caught fire (easily the scariest thing possible on a ship), you are able to task your crew with extinguishing the flames and tending to damage.   In practice we noted that this is a very tactical item as using it while in the middle of a skirmish may put out a fire, but you may end up with another one elsewhere on your ship, leaving you in dire straits waiting for that power to recharge.

In World of Tanks, as your crew ranks up to 100% you can add perks such as “Eagle Eye” for greater spotting range or “Snap Shot” for greater accuracy during turret rotation.  World of Warships simplifies this process, instead applying those skills to the Commander of the ship instead of the crew at large.  While these also do things such as increasing your spotting range or faster recharge rates on repair abilities, the presentation is much easier to understand for newcomers.

A world of gliding monsters

“A good Navy is not a provocation to war. It is the surest guarantee of peace.” – President Theodore Roosevelt

You could easily classify World of Warships as a highly tactical game.  Rushing into battle without a plan, ignoring the rest of your fleet, and being a lone wolf are not nearly as rewarding as hiding in the atolls, using a carrier to spot over the top of the island proper, and then firing battleship deck guns over the top of the landmass to strike targets on the other side.  Running shallow and dangerous right against the shore with a fast-moving Cruiser, the collision alarm blaring is equally as exhilarating.  Darting in for the kill, popping smoke, and escaping before larger ships can zero in on your position is incredibly effective, unless those pesky carrier planes are circling overhead.  Overall, the game feels very polished for a closed beta stage, and already very well balanced.

We tested World of Warships on two machines – a MSI GT70 laptop and a 27” iMac running boot camp and Windows 7, both of which being roughly 3 years old.  The iMac looked pretty fantastic, even with the graphics tuned to “medium”, and the GT70 was able to crank everything to the top.  Seeing every gun on the ships swivel and train on the enemy, flags ripple in the wind, props cavitating the water, and the eye-popping detail in the ocean waves underneath these beasts of iron and steel shows just how far this game has come in the last six months since we saw it last.

If I can see you, you are in range.

While we don’t have an exact release date for World of Warships yet (it’s slated for some time in 2015), our initial impressions were overwhelmingly positive.  One of the editors working on this piece, Byron Scott, spends a great many weekends playing World of Tanks, and has done so for years.  His impressions of the first few games was “Yea, I guess this is ok”, but after a few more skirmishes he was absolutely hooked.  While World of Warplanes may still be hitting its stride, it’s very clear that World of Warships is something extraordinary.